Sure, it's good for you -- but it also tastes great. 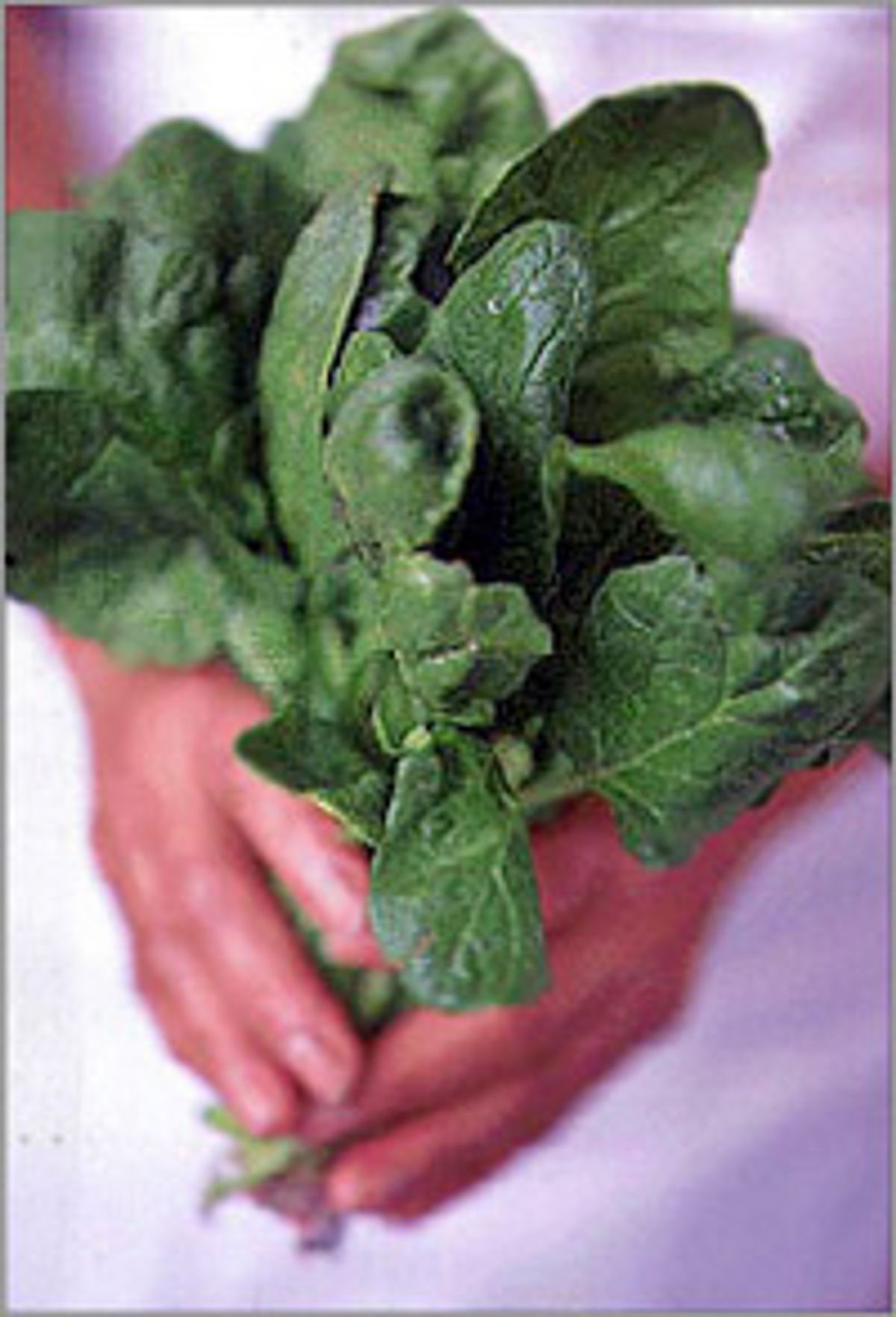 "I didn't know it was leafy until I grew up and left home," admits my friend Barbara, whose formative experience with spinach was the stringy creamed stuff her mother used to make.

"In the cartoons, Popeye squeezed a can of spinach. I loved that as a kid," confesses my friend Steve. "The can was cool. All my mother ever brought home were boxes of frozen spinach."

My own mother, notoriously not a good cook, was baffled by the vegetable. She tried cooking it with salt, pepper and a pat of butter -- and promptly went back to green beans (Del Monte's canned Blue Lake).

If there ever was a vegetable that could use some good P.R. -- maybe even a big advertising campaign -- it's spinach. Instead, its image is defined by Carl Rose's classic but disparaging 1928 New Yorker cartoon ("I say it's spinach, and I say the hell with it") and by cookbooks that refer to it as "the broom of the stomach" or "the vitamin vegetable." For years, writes Bert Greene in "Greene on Greens," spinach, like all other greens, wasn't actually cooked in American kitchens; it was punished -- even in Hollywood. "What I do," Joan Crawford once explained, "is take boiling bacon grease and pour it over spinach until it sags." Plugs like these have given this misunderstood vegetable (Spinacia oleracea, to be precise) a tough, bitter, slimy, gritty, greasy, bland reputation.

Worst of all, it's good for you.

Make that two P.R. agents and an advertising budget double that of those dancing California raisins. This is a vegetable in dire need of spin control.

Such was not always the case. The beginnings of spinach were certainly auspicious -- if a little loopy. It was first found growing wild near the desert of Dasht-e-Kavir in ancient Persia. It was named isfanakh, or "green hand," and it was cultivated (here's the loopy part) to satisfy the finicky appetite of Persian cats.

From there, the "Persian herb" traveled east, landing in China in the sixth century. It was planted alongside the rice fields, added to soups, and eventually exported as the "China flower" to India and Nepal. Some half-dozen centuries later, the Moors introduced it to Spain, and before long it was being eaten all over Western Europe -- especially during Lent, since it tended to be harvested just about then. It became a celebrated vegetable. The French even gave dishes made with spinach a fancy moniker: "florentine" -- in honor of Florence native Catherine de' Medici, who was said to have eaten spinach at every meal.

By the 17th century, there were at least 10 varieties of spinach being grown in Europe. (When even these 10 didn't prove sufficient and there was a paucity of spinach, cooks used turnip tops and beet greens -- spinach-style -- instead.) Then spinach came to the New World. Some say Columbus brought it. Others believe it came aboard the Mayflower. However it arrived, "it matters not a whit," says Bert Greene. Spinach was, he continues, "resolutely unpopular with settlers and natives alike." Greene even turned up an early Pilgrim prayer that called for protection from fire, famine, floods -- and "unclean foreign leaves" (i.e., spinach).

In other words, it was apparently in the hands of the industrious American cook that the respectability of spinach wilted. Of course, making spinach unpleasant isn't particularly difficult. A hastily prepared spinach salad -- with its telltale forkful of teeth-grinding grit -- can be enough to make you swear off vegetables forever. Ditto for watery cafeteria steam-table spinach, preservative-enhanced canned spinach, frozen creamed spinach, and showy Junior League spinach ring molds. Not to mention those off-putting bags of slimy, over-the-hill spinach found in too many supermarket produce departments.

Even the "Joy of Cooking," which rarely has an unkind word to say about anything, is a little peevish about spinach: "Forced down the throats of a generation," it begins, "spinach today is in bad repute for its calcium-robbing activity. Perhaps we had better ... just eat it in moderation." A warning in the "Joy"? Calcium robbing? This vegetable is so bad it committed a felony? And that's just the beginning. Even many of spinach's pros are cons: Its much publicized iron content? It's there, all right, but it's not the readily assimilated kind. All those vitamins? They're water-soluble; too much cooking negates their value. And that pleasant sorrel-like acidic taste? It comes (like sorrel's acidity) from oxalic acid, which is what steals the calcium -- and which for that reason is not recommended for anyone suffering from liver ailments or kidney stones.

That's the bad news. But, hey, let's be fair here. Spinach is a lot like, say, a blind date or a Bette Davis movie: At first it may seem so awful you just want to die; then, when you're about to give up hope, you suddenly realize how truly magnificent and magical it is.

Although most plentiful in the spring, this magnificent, magical vegetable is available fresh all year long in this country. Since its texture tends to break down in hot weather, however, it is generally better in cooler months. There are numerous varieties of spinach grown in America, but essentially just three types: savoy, the crinkly strain that makes up the bulk of the American market; flat leaf, which is grown mostly in California and preferred for salads; and semi-savoy, which is a cross between the two -- sort of crinkly and, some say, sort of a mistake. (There are plenty of spinach stand-ins around the world: the arrow-shaped Asian orach and the fleshy African basella; the English "Good King Henry," named for Henry VIII; the Ethiopian spinach rhubarb; and, Down Under, the dark New Zealand spinach and prickly puha -- but these are rarely seen here.)

In classic French cuisine, spinach was likened to cirevierge, or virgin beeswax, because it was known to receive an impression or effect from other ingredients rather than impose its flavor on a dish. It gets along well with cream, butter and cheese; onions, garlic and mushrooms; fish, ham and chicken; sesame seeds, nutmeg and anchovies; even prunes (in Morocco) and raisins and pine nuts (in various Mediterranean countries). It also stars in everything from ravioli stuffings to tarts to beds for poached eggs or oysters.

According to the U.S. Department of Agriculture, Americans consumed 170 million pounds of fresh spinach in 1995 or just over half a pound per person. Of course, those who know how to cook with a certain amount of skill -- or those who know where to dine -- eat more than their fair share: the spinach-loving family of cookbook writer Madhur Jaffrey, who prepares it with chickpeas, tomatoes, and a mix of North Indian spices; or customers at An American Place in New York, where chef Larry Forgione serves baby spinach "country-style," wilted and tossed with Vidalia onions and finely diced bacon; or diners at the Locke-Ober Restaurant in Boston, which has been serving exquisite creamed spinach as a side dish since 1875.

Successful spinach dishes like these will certainly help restore the reputation of spinach -- but I still think it might need that big ad campaign. I'm not sure about how well spinach can dance, but if those plucky little raisins can do it, it's worth a try. I see state-of-the-art Claymation, bold graphics and really fabulous choreography. And the music has got to be great. We won't bother asking the Nitty Gritty Dirt Band.