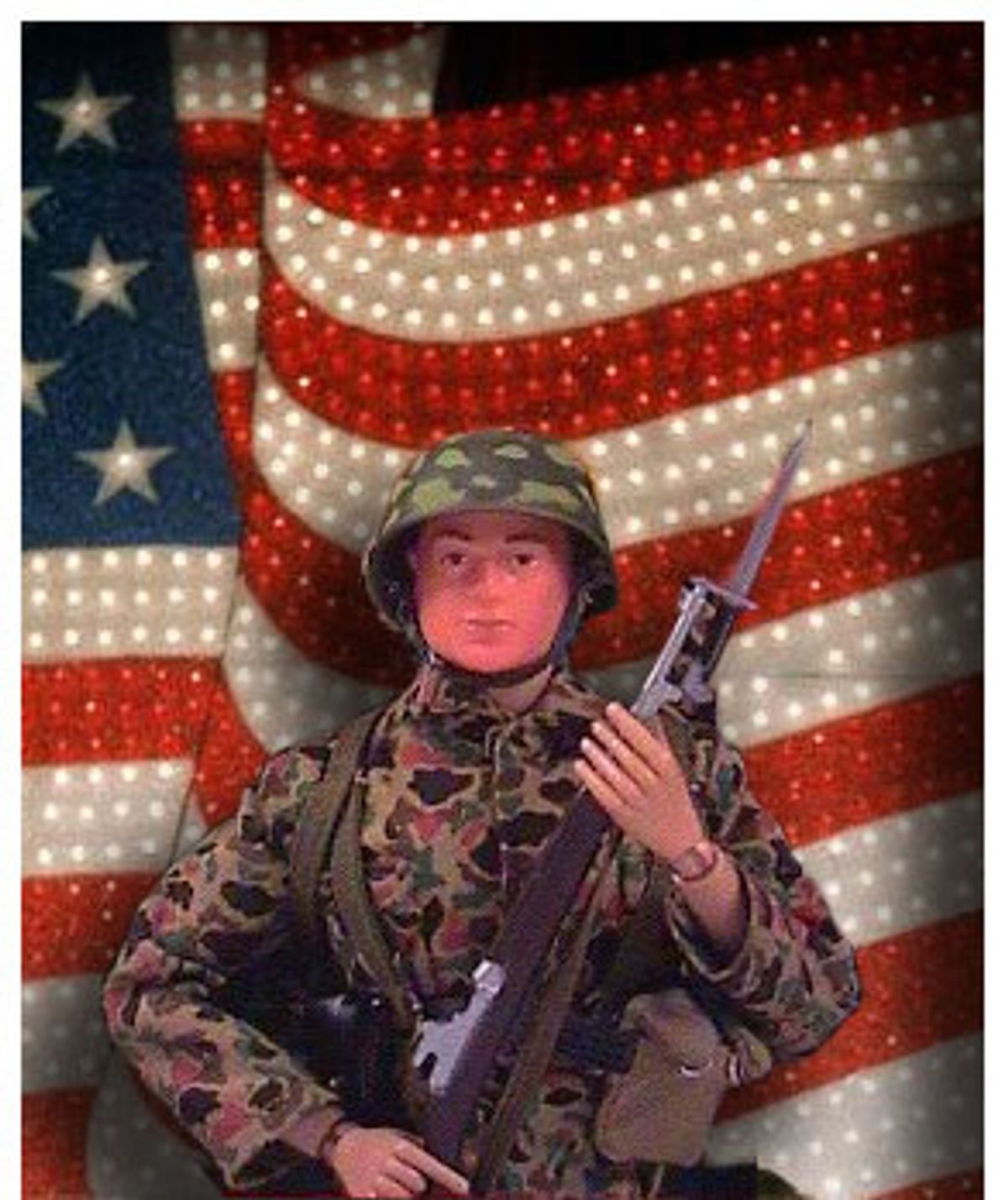 As G.I. Joe, the leader of America's daring, highly trained special missions force, celebrates his 40th anniversary this summer, a group of veterans has aired television advertisements attacking his military record. The ads, purchased by G.I. Joe Veterans for Truth, accuse Joe of lying about his war record and letting villains escape throughout the 1985-86 war against Cobra, Destro and the forces of evil.

In one 60-second ad, veterans of the two-year-long, completely televised war -- in which every weekday afternoon American troops fought Cobra, a ruthless terrorist organization determined to rule the world -- speak out about G.I. Joe. "I served with G.I. Joe," says one veteran, Thomas Ross. "G.I. Joe is no real American hero."

In interviews yesterday arranged by G.I. Joe Veterans for Truth, a nonprofit arm of a little-known think tank called Serpentine Enterprises, the veterans -- low-level G.I. Joe foot soldiers, all code-named "grunts" -- were unanimous in describing Joe as an incompetent leader unfit for command and not worthy of honor. Ross, a blue laser gunner 1st class, described the ordeal he was put through during the celebrated incident in which the entire male leadership of the Joe team was hypnotized by the Baroness and her Conch of the Sirens.

"Our entire platoon was ordered to attack Cobra base just to free all these addlepated G.I. Joes," Ross said. "We risked our lives to save the Joes -- not the other way around." During the pitched battle, Ross disarmed and captured three Cobra soldiers by shooting a nearby tree with his blue laser gun, causing the tree to fall on the enemy, trapping them. "I was dodging red lasers left and right," Ross added. "G.I. Joe said he'll fight for freedom wherever there's trouble. That was a lie."

Another veteran, G.I. Joe Air Combat pilot Matthew Albers, noted that his squad was called in as air support when G.I. Joe allowed Cobra to take over Fort Knox. "This Zartan fellow disguised himself as the general in charge of the fort," Albers said, "and G.I. Joe was completely fooled. We had to scramble a dozen planes to attack a United States Army base, just because Joe couldn't see through a dime-store mask."

Albers' F-14 was shot down by a Cobra red laser cannon; the pilot and co-pilot had only seconds to eject and parachute to safety before the plane exploded. "Luckily," said Albers, "we escaped with only minor injuries."

His eyes misted up as he recalled the carnage that terrible day. "Eleven American soldiers suffered minor injuries at Fort Knox," he said. "Was it worth it?"

After G.I. Joe retook Fort Knox, Albers added, every major Cobra officer escaped, including Zartan, Buzzer, Maj. Bludd, and Cobra Commander. "Didn't catch a one. We heard them cursing Joe's name, but they drove away in a Hiss tank. Is that never giving up or staying till the fight's won?" he asked. "No, it isn't."

In a press conference today, the public faces of G.I. Joe -- Hawk, Lady Jaye, Flint and Sgt. Slaughter -- assembled outside G.I. Joe headquarters. They were flanked by much of the Joe team, including the mysterious ninja Snake Eyes, silent and brooding, and the Native American tracker Spirit, feeding mice to his eagle Freedom in a dignified manner. (Joe himself resides in seclusion; the few glimpses the public has been offered suggest he is a giant of a man, up to four times as tall as the rest of his soldiers.)

"None of the grunts were present for G.I. Joe organizational meetings," Flint said. "We're grateful to them for all they've done for our country, but they simply don't understand the tough choices G.I. Joe has had to make to keep America safe over the past 40 years. He kept Cobra Commander from carving his face on the moon with a giant laser. He shut down Destro's Texas dude ranch. He stopped the Crimson Guard from replacing all the world's money with Cobra currency. G.I. Joe was there."

Asked about the number of times G.I. Joe let major international terrorists escape, Flint scoffed. "Let them escape? No way. These guys have escape plans, jet packs, submarines constantly at the ready. We're just trying to foil their plans while keeping all our men safe. That's why the 1985-86 Cobra war was the only war ever fought by U.S. troops in which no American or enemy soldiers died."

Flint stepped back as Sgt. Slaughter took the microphone, shouting that two of the veterans in the TV ad bought by G.I. Joe Veterans for Truth were obviously Crimson Commander twins Tomax and Xamot in disguise. Lady Jaye came to the microphone and gently dismissed Slaughter's accusation. "We are, however, worried that the ads might be secretly funded by Cobra," Jaye added. "You reporters should remember that politically motivated advertisements aren't always what they seem. Often, back in the shadows, the people pulling the strings might not be interested in telling the truth."

The reporters at the press conference, surprised, smiled and clapped each other on the back. "Now we know," said Rick Atkinson, a correspondent for the Washington Post.

"And knowing," said Lady Jaye, "is half the battle."