The insurgents in Iraq know that keeping its oil flowing is crucial to U.S. success in the war -- and they're doing all they can to muck things up. 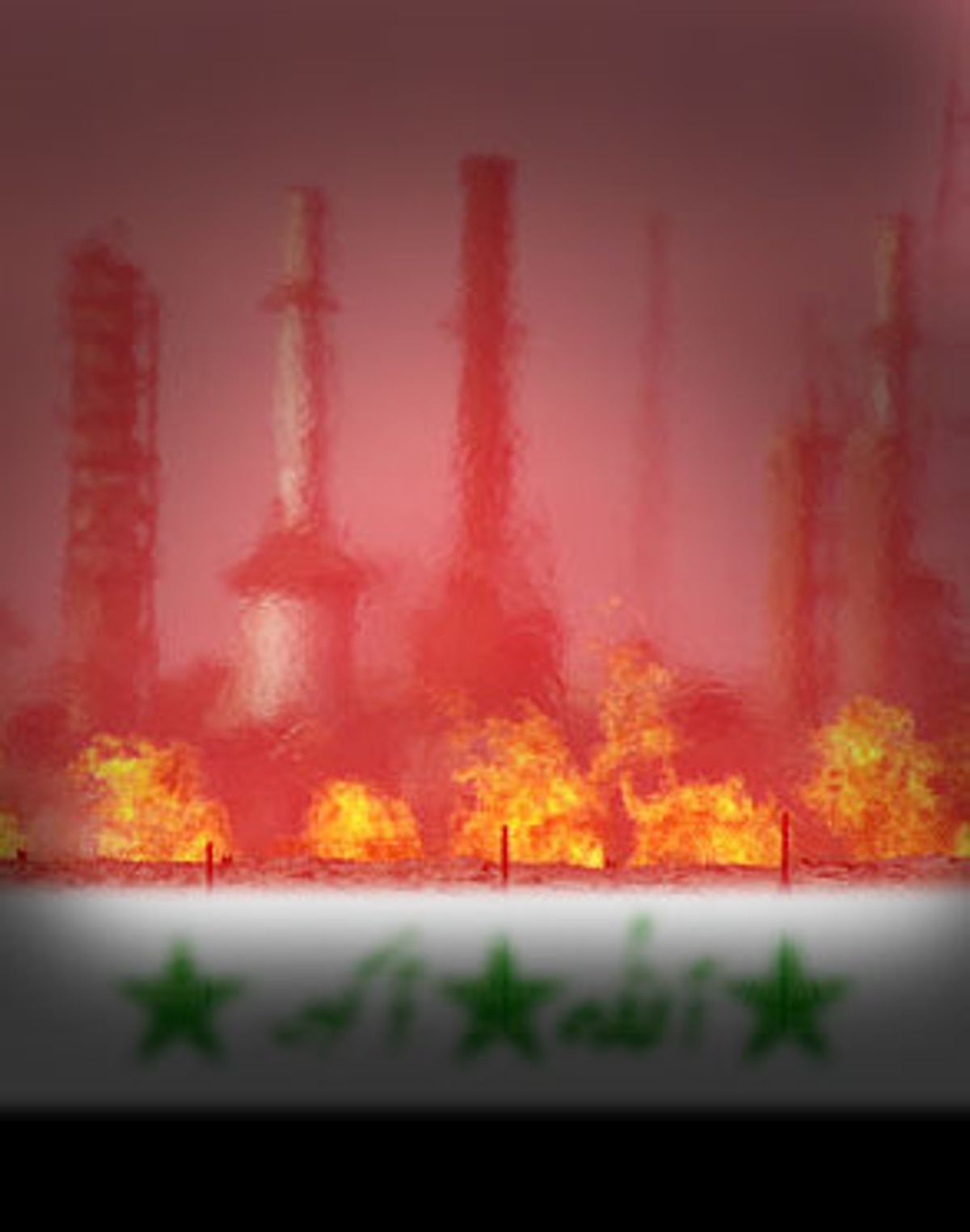 Last month, Defense Secretary Donald Rumsfeld assured Americans that Iraq "continues to calm down." But the bitter reality is that America is losing the war in Iraq. And it's not just because the interim Iraqi government can't stop the suicide bombers or prevail over the soldiers loyal to Shiite rebel leaders like Muqtada al-Sadr. It's also because neither the U.S. nor the interim Iraqi government can control the flow of Iraq's oil.

The bad news from the oil fields continued last week when men loyal to Sadr surrounded several Iraqi government buildings and threatened to attack pipelines and other oil facilities unless the government stopped pumping oil through the pipes that feed Iraq's oil export terminals in the Persian Gulf, Mina al-Bakr and Khor al-Amaya. (Mina al-Bakr was built by Halliburton for the new Baathist government in the mid-1970s, when the United States did not have diplomatic relations with Iraq.) The Iraqi government reportedly stopped pumping oil in an effort to stem unrest in Basra, a city that for months has been viewed as more pro-Western than other areas.

Saboteurs also bombed one of the two main pipelines that feed the terminals. Repair crews had the 48-inch line fixed by Aug. 11, but it was unclear when -- or if -- the pipeline would be put back into service. Every day that the Persian Gulf terminals are shut, it costs the Iraqi government at least $50 million in lost oil revenue.

The situation in the northern oil fields is even worse. The easiest way to move oil from the oil-rich fields near Kirkuk to market is through a pipeline that runs to the Turkish port at Ceyhan. But ever since U.S. forces invaded Iraq, that pipeline has suffered more hits than Mike Tyson. The pipeline has been bombed so frequently that Iraqi officials are openly talking about shutting it down.

Indeed, most of the news from Iraq's oil sector, despite some $2.3 billion in investment by the United States in the months since Saddam Hussein was deposed, has been bad. Recent figures show that oil production now approaches 2.3 million barrels of oil per day. Exports have reached about 1.9 million barrels per day -- a fraction of the amount Iraq was exporting in the days before the first Iraq war in 1991. Although the exports are far less than the Pentagon had hoped for, they are helping Iraq's nascent government stay afloat. And the new regime has been bolstered by record-high oil prices, which show no sign of abating anytime soon. On Aug. 13, prices for September delivery of light sweet crude hit a record high of $45.93 a barrel on the New York Mercantile Exchange.

"Whoever controls Iraqi oil controls Iraq's destiny," says A.F. Alhajji, an oil industry analyst at Ohio Northern University who closely follows the Persian Gulf. And now, says Alhajji, the insurgents are ensuring that Iraq's destiny is to continue in chaos. By strangling the country's oil exports, they are cutting off the lifeblood of Iraq's new government. Without reliable flows of cash from its oil industry, Iraq will not be able to rebuild. And the U.S. Congress is unlikely to fund the Iraqi rebuilding effort unless it shows some results quickly.

Since last June, insurgents have attacked various parts of Iraq's oil infrastructure at least 90 times. That figure is probably a fraction of the real number. Gal Luft, executive director of the Institute for the Analysis of Global Security, a Washington think tank that tracks energy issues, says the real figure may be twice as high. But the Pentagon is reluctant to talk about the attacks on oil targets. "Nobody really wants to provide information because it's a political hot potato," says Luft. According to IAGS's pipeline watch Web site, there were 90 attacks on oil targets between June 2003 and early August of this year. On Aug. 5 alone, there were three attacks, including an additional bombing of the Kirkuk-to-Ceyhan line. That same day, a bomb hit a gas pipeline that feeds an electricity plant in Bayji, north of Tikrit.

For the insurgents, pipelines are attractive targets. Some 4,400 miles of pipelines crisscross Iraq. The Kirkuk-to-Ceyhan line -- which, according to IAGS, has been bombed 11 times in the past 15 months -- has become the insurgents' favorite target. (Other sources say that pipeline is being bombed much more frequently -- at least once a week, sometimes more.) The ongoing cost of repairing the Kirkuk-to-Ceyhan line and the nearly impossible task of protecting it from further attacks are two reasons Iraqi officials have considered shutting it down, a move that makes sense to Alhajji. "It's not worth it anymore," he says, adding that the expense of patrolling the line, combined with the lost oil and repair costs, has made the pipeline expendable.

But shutting down the Kirkuk-to-Ceyhan line would have negative repercussions for both the Turks and the Kurds. The Kurds, who have been the most reliable supporters of the American invasion, are very concerned about losing the revenue that comes from the oil fields in northern Iraq. If that revenue stops flowing, the Kurds will lose a powerful voice at the bargaining table. The Turkish government, which is nominally pro-American, will be angered if the pipeline is shut down because the Turks are paid transit fees on oil shipped through the line. And there's another danger: Closing the northern export route would enable insurgents to concentrate all their disruptive efforts on the pipelines and pumping stations in the central and southern parts of the country, which feed the Persian Gulf oil terminals.

Furthermore, if the line is shut down, there is a real possibility that it could be looted, just as other parts of the Iraqi oil industry were looted in the weeks after American troops got to Baghdad. If pumps and other parts are stolen, the Iraqi government will be limited to exporting its oil through the Persian Gulf for months, if not years, after order returns to the country.

President Bush and his administration don't like to talk about Iraq's oil -- at least not in the context of a justification for the war. In November 2002, in an interview with Steve Croft on "60 Minutes," Rumsfeld asserted that the then-looming Iraq war had "nothing to do with oil, literally nothing to do with oil."

Despite Rumsfeld's pronouncement, it's clear that oil has always been the key factor in America's relationship with Iraq. During the Gulf War, George H.W. Bush kept to his script that the war was "not about oil." Yet his own secretary of state, James Baker, a Texan with deep ties to the oil industry, didn't get the memo advising him to stick with the script. On Nov. 13, 1990, Baker held a press conference during which he said that the "economic lifeline of the industrial world runs from the [Persian] Gulf, and we cannot permit a dictator such as this to sit astride that economic lifeline. And to bring it down to the level of the average American citizen, let me say that means jobs. If you want to sum it up in one word, it's jobs. Because an economic recession worldwide, caused by the control of one nation, one dictator if you will, of the West's economic lifeline will result in the loss of jobs on the part of American citizens."

The very first line of the recently declassified directive declared, "Access to Persian Gulf oil and the security of key friendly states in the area are vital to U.S. national security." It goes on to say that America "remains committed to defending its vital interest in the region, if necessary through the use of military force, against any power with interests inimical to our own."

Oil was a key factor in the second Iraq war from the get-go. The first combat took place on March 20, 2003, when several groups of Navy SEALs stormed the Mina al-Bakr and Khor al-Amaya oil terminals. By controlling the oil terminals, the Pentagon was able to ensure that it would eventually control Iraq's oil exports.

A week later, on March 27, Deputy Defense Secretary Paul Wolfowitz told Congress that the war wouldn't be overly expensive. "We're dealing with a country that can really finance its own reconstruction, and relatively soon." He continued, saying "the oil revenues of that country could bring between $50 and $100 billion over the course of the next two or three years."

A few weeks later, Wolfowitz compared America's reaction to the threat of nuclear weapons being developed by North Korea with the situation in Iraq. "Let's look at it simply," he said. "The most important difference between North Korea and Iraq is that economically, we just had no choice in Iraq. The country swims on a sea of oil."

Leaders of al-Qaida have been talking about the oil issue for years. In interviews with Western reporters a few years ago, Osama bin Laden repeatedly referred to what he called the "rape" and "plunder" of Saudi Arabia's oil by the United States. In 2002, after al-Qaida operatives bombed the French oil tanker Limburg off the coast of Yemen, the terror group released a statement that said, "The Mujahadeen hit the secret line -- the provision line -- and the feeding to the artery of the life of the crusader nation."

On April 24 of this year, three bomb-laden boats piloted by suicide bombers attacked both of Iraq's oil terminals in the Persian Gulf. None of the boats hit their targets, but the attacks killed two U.S. Navy sailors and injured four others. Two days after the attacks, al-Qaida leader Abu Musab al-Zarqawi issued a statement that said, "We tell you enemies of God, robbers of oil and riches and drug traders ... O snakes of evil, we will exterminate and debilitate you by land, sea and air until God makes us victorious or until we die."

The attempted bombings of the oil terminals were the first waterborne suicide attacks on American forces since 2000, when al-Qaida engineered the attack on the USS Cole in Yemen, which killed 17 American sailors. Al-Zarqawi reminded the world of the attack on the USS Cole, saying that his loyalists "have repeated this attack in a new garb and with stubborn determination by striking vital economic links of the infidel and atheist states."

One week after the attack on the terminals, Saudi gunmen killed two Americans, two Brits and an Australian who were working for ABB Lummus in the oil town of Yanbu, Saudi Arabia's most important port on the Red Sea. On May 29, al-Qaida assassins attacked an oil industry complex in Khobar, Saudi Arabia. That attack left 22 people dead. After the Khobar attack, al-Qaida leader Abdul Aziz al-Moqrin (now believed to be dead) said the attack was carried out because Saudi leaders have been providing "America with oil at the cheapest prices according to their masters' wish, so that their economy does not collapse."

The Iraqi government and the Pentagon are doing all they can to protect Iraq's oil infrastructure. More than 14,000 security personnel are now working for Erinys, a South African private security firm that has a $39 million contract to guard Iraq's pipelines, pumping stations, refineries and oil wells. But given the results so far, Erinys may need an additional estimated 14,000 guards.

Mike Ameen, a Houston-based oil executive, is not optimistic about the future of Iraq's oil economy. Ameen has spent decades working in the Middle East. He speaks, reads and writes Arabic and has recently worked as a consultant for the U.S. government on the Iraqi oil business. Ameen says that by targeting the oil infrastructure, the insurgents are making it far more expensive for oil field contractors to do business in Iraq. They are also preventing any major oil companies from even considering new investments in Iraq. "It's a gloomy picture -- it really is," says Ameen.