"End of the Century: The Story of the Ramones"

A heartfelt look at the four misfits from Queens who saved post-'60s American culture. 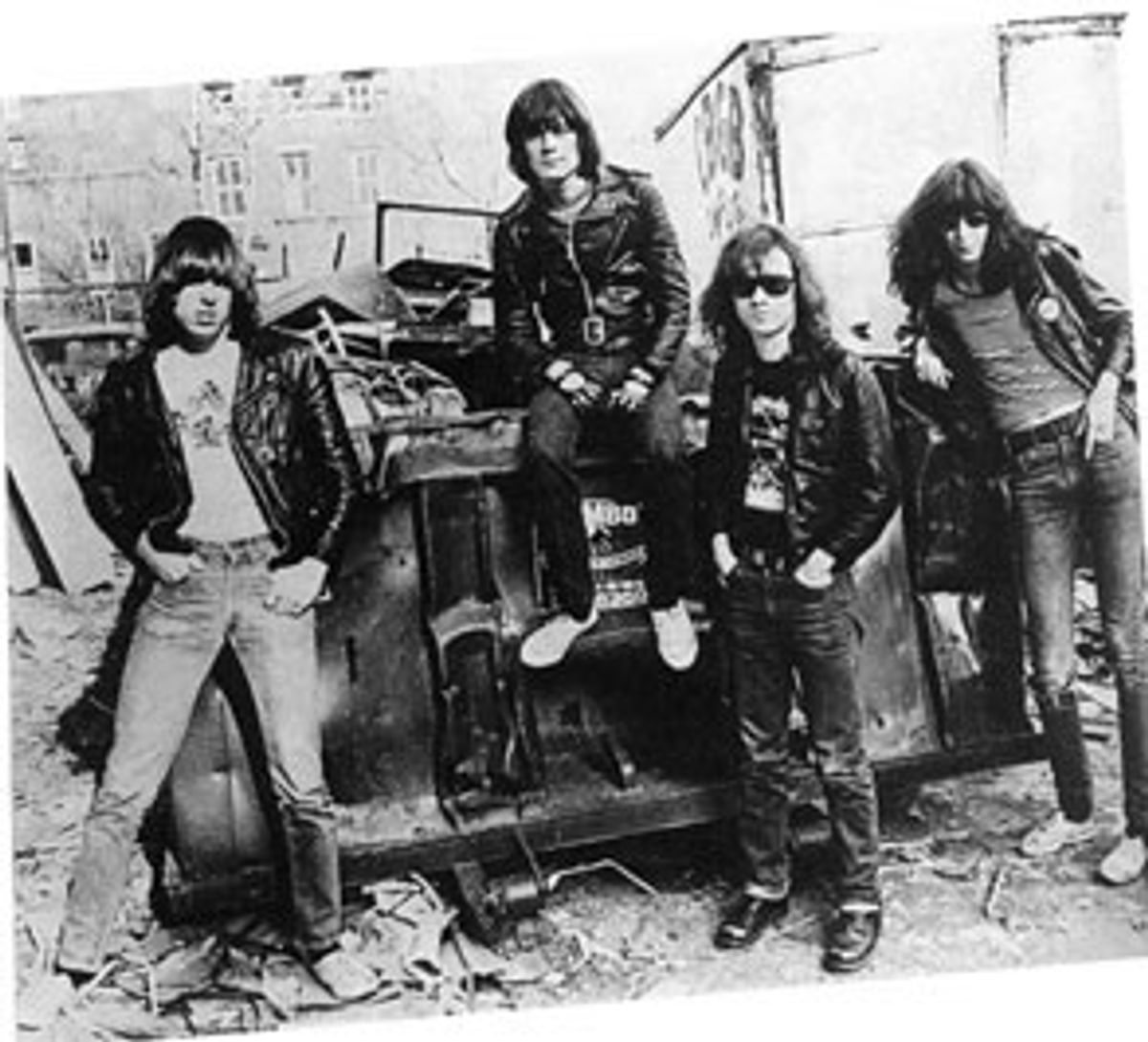 It's a shame there are no great Russian novelists -- at least not currently -- to chronicle the twisted, bloody, passionate relationships that take root within rock bands. Rock-band sagas are often the equivalent of family dramas in which sibling squabbles blossom into full-blown hatred, husbands and wives glare at one another over seemingly serene dinner tables, and mysterious interlopers appear out of nowhere to pit brother against brother (or sister against sister). Beatles biographer Philip Norman made the observation that the Beatles were closer than brothers, and although that statement can't be stretched to apply to all rock bands, musicians who work together constantly over a long stretch of time learn things about one another that they'd rather not know. The strength of the bond is the very thing that's terrifying about it.

Michael Gramaglia and Jim Fields aren't Russian novelists, but they understand the drama in the story of one of the world's great rock bands, the Ramones. The Ramones weren't just part of the mid-1970s New York punk scene; in their sneakers, leather jackets and limp, stripy T-shirts, with an exuberantly messy guitar sound cobbled together from oddly shaped driftwoody bits of '60s surf pop, they essentially carved it out. The original four members of the band, Joey, Johnny, Dee Dee and Tommy, used the same surname, as if they actually did belong to the same family -- no one ever even considered them by their real names, Jeffrey Hyman, John Cummings, Douglas Colvin and Tom Erdelyi, respectively. Four misfit kids from Forest Hills, Queens, they were united by their common love for Iggy Pop and the New York Dolls and perhaps not much else.

Then again, even if blood is thicker than water, it's not nearly as sticky as music. The Ramones got together in 1974 and stayed together for more than 20 years, surviving several tricky personnel changes even though, it seems, certain members of the original four could barely tolerate one another to begin with. Gramaglia and Fields piece the band's story together with interview footage of all four original members. (Joey Ramone died in 2000 of lymphatic cancer; Dee Dee died in 2002 of a heroin overdose, not long after the band was inducted into the Rock and Roll Hall of Fame. Gramaglia and Fields began making the movie in 1998, and, after years of working out legal details with various parties, are just now getting the picture released.)

Tommy Ramone, who often served as the band's chief spokesperson in its early days, now has a long mane of gray-frizzled hair -- he's more Woodstock than Lower East Side, and he comes off as alternately cranky and politely introspective. Dee Dee, slouching comfortably in a chair, is something of an affable, animated skeleton, and although he looks somewhat disconnected and fried, most of what he says about the band and its jangly mix of personalities feels firmly grounded in common sense. Gramaglia and Fields also interviewed the drummers who ultimately replaced Tommy (he left the band in 1978), Marky (Marc Bee) and Ritchie (Ritchie Reinhart, who, with his spanky haircut and faux-Hugo Boss suit, now appears to be working as a snake-oil salesman), as well as bassist C.J. (Christopher John Ward), who came aboard when Dee Dee left in the '80s to pursue a rap career.

But it's the contrast between Joey and Johnny that snaps the band's dynamic into the tightest focus. Joey was the most famous and the most beloved Ramone; he comes off reticent and sweet but still, underneath it all, resolute and tough-minded. But Johnny, who still wears the same bowl haircut, and who is probably single-handedly responsible for keeping the band together in any way, shape or form, is the charred-black heart of the movie. He's the ultraconservative father figure, the surly papa who crashes the raucous pajama party and booms, "You kids pipe down in there!" -- before turning off the electricity just for good measure.

The meek, thoughtful Joey Ramone we see in "End of the Century" is the Joey Ramone we expect. But even though all Ramones fans know that relations between the band's members were always fragile and strained, I wasn't quite prepared for the Johnny Ramone we see here: He's stingy with his snaggle-toothed, boyish smile, as if he hasn't yet figured out how to work it. At various points in the picture, other interviewees assert how controlling Johnny was in any matter concerning the band. And Johnny, although seeming a bit bewildered by the accusations, doesn't refute them. He freely admits, without a whiff of disingenuousness, to having been a really bad kid when he was growing up in Queens. And he's unapologetic to the point of blankness about how he went off with and ultimately married the woman Joey was dating in the early '80s. (They're still married. Joey and Johnny barely spoke in the years after the "girlfriend theft" occurred, and Johnny didn't even want to contact Joey before he died -- for reasons that, as he explains them in the film, seem almost horrifically honorable.)

It may sound like a contradiction to say that Johnny comes off as sympathetically repellent, but that's about the only way to describe the aura he throws off. And it's to Fields and Gramaglia's credit that they capture so much of Johnny's prickly thundercloud electricity. One of the many difficulties the filmmakers faced while they were making "End of the Century" was that Joey assumed they were fixated on Johnny's side of the story, while Johnny felt certain their sympathies lay with Joey. But Gramaglia and Fields clearly love the band too much to favor any one of its members: It's all or nothing in this particular family saga.

While "End of the Century" feels a bit straggly toward the end (the rise of the Ramones is exhilarating; their slow, unfair demise is a downer), and its chronology is sometimes a little vague, the movie captures the spirit of both the band and the era they helped shape. In the '70s, the Ramones were hugely influential in the U.K. (they inspired outfits like the Clash and the Sex Pistols), but Stateside, they were forced to scrabble to get gigs in crummy New Jersey clubs. They made terrific records that didn't sell; they toured, hard, through the '80s and half of the '90s just to make a living. They have always been revered in South America (the movie includes footage of elated Brazilan kids swarming around the Ramones' car). Toward the end of their career, they'd play huge stadiums there -- only to return home to the States to play tiny clubs in New Hampshire.

The passion of fans, unfortunately, doesn't always add up to actual dollars. But even if the Ramones never got to live like rock stars, there's no doubt that they were rock stars of the highest order. Fields and Gramaglia are never cavalier about the band members' fractious relationship. If anything, their movie is imbued with a sense of gratitude that the Ramones would suffer so much internal bitterness in order to give us, their fans, so much rock 'n' roll bliss.

The Ramones sprang to life after the overrated thrills of the '60s had petered out. In the movie, famous punk grandpappy Legs McNeil describes the post-'60s, pre-Ramones universe: "Everything was brown, everything was earth tones ... you couldn't get laid." And suddenly, four people who didn't really like one another that much bounded onto the scene -- the reward we'd been waiting for after suffering through the last, overscripted days of all that peace 'n' love crap. Fields and Gramaglia suggest, without having to twist our arms, that the Ramones helped change the course of our cultural history. They didn't just usher in the end of the century: They gave it its second wind.