Bill Cosby's tough-love attack on blacks who neglect education is still causing shock waves. And it might even help the kids who need it. 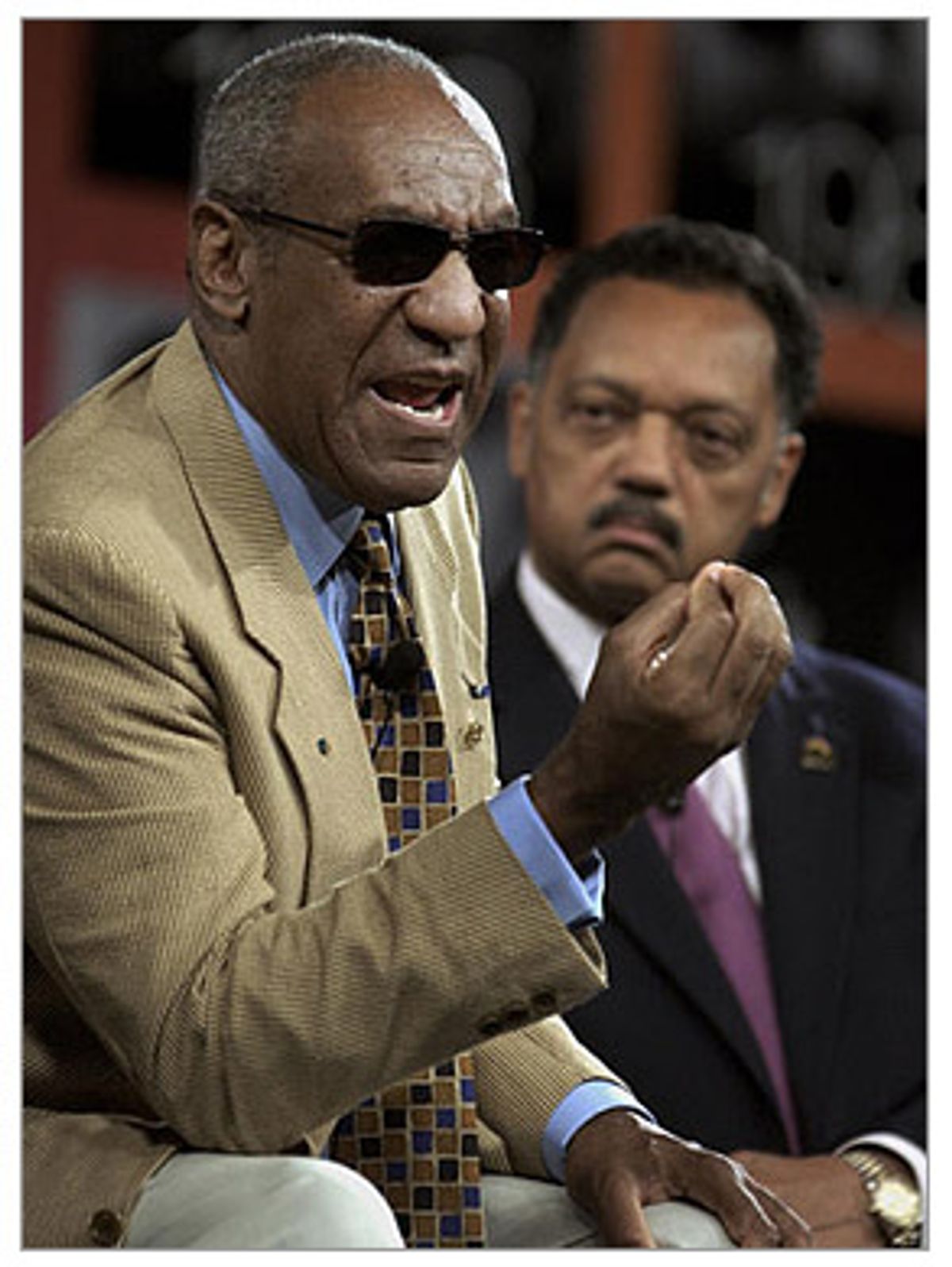 For two centuries, prominent African-Americans have regularly chastised black parents who fail to make education a top priority. Growing up, I listened to such complaints all the time. So when I first heard the remarks Bill Cosby made at the NAACP and Rainbow PUSH Coalition national conventions this summer, I thought, Amen ... and big deal. There was nothing terribly new in Cosby's comments. Yet his biting words provoked a firestorm of controversy that continues to burn -- and I'm tired of it.

The misrepresentation of Cosby's remarks by news reporters and commentators who should know better continues into the present. The Associated Press headlined one story: "Bill Cosby Has More Harsh Words for the Black Community," and characterized his remarks as a "tirade." Equally offensive was BET staff writer James Hill's headline "Bill Cosby Takes Black Folks to the Cleaners." Even progressive writer and syndicated columnist Earl Ofari Hutchison referred to Cosby's comments as a "demoralizing ... headline-grabbing yarn."

For those who somehow missed the details, Cosby accused some black people of neglecting their duties as parents and chastised them for buying expensive sneakers while refusing to purchase much needed educational tools. Probably his harshest remarks were about their poor use of English. "They're standing on the corner and they can't speak English ... I can't even talk the way these people talk: 'Why you ain't,' 'Where you is' ... And I blamed the kid until I heard the mother talk. And then I heard the father talk ... Everybody knows it's important to speak English except these knuckleheads ... You can't be a doctor with that kind of crap coming out of your mouth."

But it's wrong to characterize Cosby's statements as an attack on the black community. Cosby's goal was to point out a problem that needs correcting and to provoke action, and plenty of other black leaders have done the same in the past.

The explosive reaction to Cosby's critique may partly be due to our 24-hour news cycle and the limitless communication capability of the Internet. But the shock among both liberal and conservative whites actually reveals how divorced many white Americans are from currents of thought and debate within the black community. This is an age where liberal whites are generally uncomfortable with publicly criticizing the black community, so they were taken aback by Cosby's remarks, while white conservatives seemed to take comfort in a respected black public figure stating what they thought all along -- that black people are their own worst enemies.

But there was nothing in Cosby's remarks that put him outside the black political mainstream. In his comments I heard echoes of African-American abolitionist David Walker, who wrote in his "Appeal to Colored Citizens of the World" in 1830, "I pray that the Lord may undeceive my ignorant brethren, and permit them to throw away pretensions, and seek after the substance of learning." Translated into today's language, Walker is exhorting young people to quit focusing on acquiring the "bling-bling" and get an education. W.E.B. DuBois, a tireless advocate who co-founded the NAACP, declared famously that, "A little less complaint and whining, ! ! and a little more dogged work and manly striving, would do us more credit than a thousand civil rights bills." Malcolm X explained that "Black nationalism is not designed to make the Black man re-evaluate the White man, but to make the Black man re-evaluate himself. We ourselves have to remove the evils, the vices that are destroying the moral fiber of our community."

Although Rev. Louis Farrakhan is publicly viewed as someone who harshly criticizes whites, he convened his Million Man March in 1995 to preach about the failings of black folks, and called on black men to atone for their sins and take care of their families. And while the Rainbow PUSH Coalition is often seen merely as a liberal interest group calling for more government assistance, for more than two decades it has also called on parents to pledge to take their children to school, meet with their children's teachers, and make sure that they receive a progress report at the end of the semester that is discussed thoroughly with that child's teacher. Even rapper Kanye West, whose "College Dropout" CD bothered some blacks because of its sarcastic messages about education, criticizes those in the community who buy jewelry and fancy cars instead of houses, and who rap about sex but not spirituality.

So Cosby's remarks fit squarely within the African-American political tradition, in which those who are the most fervent critics of racism are often the harshest critics of black folks' own failings. This tradition cannot be claimed by liberals, integrationists, nationalists or conservatives alone. The message is an old one. Despite America's consistent failure to provide quality education to black America, through policies that first outlawed, then segregated and today still underfund public education, it is the responsibility of black people to overcome those barriers -- or else continue to suffer.

Although Cosby is both a comedian and actor, he is also an educator by profession and training. Like his recent statements, Cosby's humor has always been hyperbolic, creating extreme characters and images such as Fat Albert and "the Chicken Heart That Ate Chicago." He created the universally acclaimed "Cosby Show" in the 1980s with the goal of spotlighting a positive, professional black family that rose above the buffoonish characterizations that existed on TV up until that point. Cosby was not only the father for black America, but he became America's father figure as well. He has expressed his commitment to black people and American culture as a communicator, an entertainer and a philanthropist. Cosby has not given up on the black poor.

Black conservative commentators, such as Larry Elder or educator Thomas Sowell, thrilled to the frenzy over Cosby's remarks, because they have no problem with nonconstructive and mean-spirited criticisms of the black community. But these people lack widespread legitimacy. Most black people recognize the difference between the black conservatism of the past, as expressed by Booker T. Washington, Marcus Garvey and even Elijah Muhammad, and the new brand of Elder and Sowell. The old guard's black self-criticism grew not out of a desire to cultivate the love of the white right, but out of an age-old tradition of self-reliance. The new black conservatives are not Cosby's soul mates -- they perceive the problems he spoke of as solely the result of individual laziness and apathy. But Cosby's criticisms were not intended as a justification for cutting back government funding for education or urban development.

Certainly, there remain some liberals of every race who believe prominent blacks should only talk about the failure of America to educate African-Americans, never about the failings of black Americans themselves. Their fear is that Cosby's comments will be used to blame poor blacks for their predicament and further erode the programs that exist to help them. This perspective was crystallized by San Jose Mercury-News columnist Joe Rodriguez when he wrote that he "cringed" at Cosby's comments because the "wrong jokers will embrace the punch line." But many other people were comfortable hearing Cosby say publicly what they believe privately: Black America won't thrive until it gets help from within, not just from outside.

Cosby's comments may well be remembered for stirring up a new round of black community debate -- and white attention to it. They are still sparking discussion all over the country, from a Boys and Girls Club forum for African-American youth and leaders in Fort Lauderdale, Fla., to the syndicated comic strip "The Boondocks," which depicted the young and radical Huey P. Freeman and his grandfather in a humorous week-long discussion of Cosby's comments, to a discussion among black prosecutors, cops, politicians and young people about San Francisco's black homicide rate just last week. Next week Cosby heads back to Springfield, Mass., where he's already promised to pay the college tuition of four local high school graduates, for a community forum on crime, poverty and education.

"I don't know as much as the people coming to the meeting," he told a local paper. "I'm just a high-profile celebrity whose heart is broken because it appears that this community is not showing enough support for their children," he said.

Let's hope when we look back, we find Cosby's comments inspired all of that to change.

Karin L. Stanford is a writer and professor of Pan African Studies and African American Politics at California State UniversityNorthridge. She lives in Los Angeles.