Susan Sarandon, Bruce Springsteen and an army of lesser-known door-knockers converge on Ohio to swing it Democratic blue. 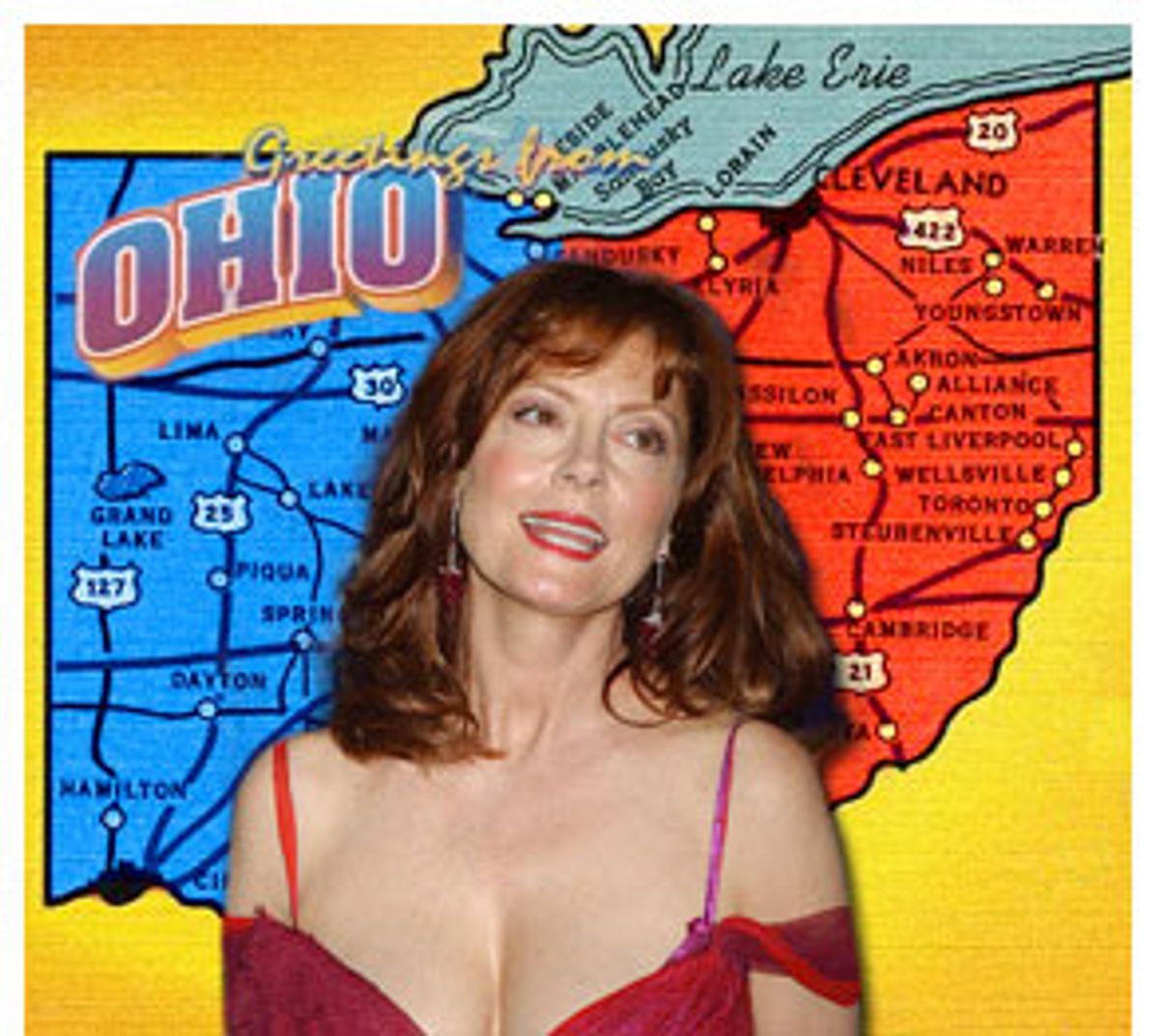 "You probably haven't been romanced quite so much before," Susan Sarandon told a crowd of about 300 Cleveland-area liberals at a fundraiser in Ohio last weekend. "Don't be let down if you're forgotten. It happens to the best of us."

Indeed, it's doubtful Ohio has ever been so romanced by celebrities, musicians, artists and activists. The state's motto, "Ohio: The Heart of It All," finally has a ring of truth to it, at least until Nov. 2, when American voters will decide what has been touted as the most important presidential election in our lifetime. Ohio is a critical swing state with 20 electoral votes that are up for grabs. The state narrowly voted for Clinton in 1992 and more decisively in 1996. Bush won Ohio in 2000 by 3.5 points with Nader taking almost 2.5 percent of the vote, a much closer election than Al Gore's campaign anticipated, considering he essentially pulled out of the state a month beforehand.

The Aug. 14 fundraiser -- attended by Sarandon, as well as Martin Sheen, Julianna Margulies, Chad Lowe (brother of Rob Lowe), Fisher Stevens and CNN humorist Andy Borowitz -- was organized by Bring Ohio Back, one of more than 33 different PACs and 527s (nonprofit groups whose tax status lets them engage in partisan campaigning, as long as they don't officially consult or coordinate with a candidate) working hard in Ohio to educate and register voters in hopes of unseating President Bush. But BOB, as it's affectionately known, is the only organization that is locally grown and is focusing almost exclusively on the Cleveland-Youngstown area. About half of the Democratic vote must come from this corner of the state in order for Kerry to win.

"Al Gore received 140,000 fewer votes in Northeast Ohio than Bill Clinton did," says Jeff Rusnak, a founder of Bring Ohio Back and a veteran political operative with the consulting firm Burges and Burges. "Gore lost the whole state by only 165,000 votes. So, while it's incredibly important what the big organizations like America Coming Together and MoveOn are doing throughout Ohio, the Cleveland-Youngstown corner of the state is critical. The way we put it is, Ohio is the most important state in this election, and Cleveland is the most important media market in Ohio. Therefore, Cleveland is the most important media market in this election."

Rusnak isn't the only one who seems to have reached this conclusion. In fact, the very same weekend BOB brought in celebrities to a leafy-liberal suburb of Cleveland, America Coming Together held its national convention in downtown Cleveland, and featured Howard Dean and the stellar Democratic candidate for the U.S. Senate in Illinois, Barack Obama. According to the Center for Public Integrity, ACT -- funded in large part by billionaire George Soros and progressive insurance millionaire Peter B. Lewis -- has spent more on field operations in Ohio than in any other state, an estimated $1 million so far.

Still, eking out a victory here will be no easy task. Despite 270,000 lost jobs in the last three years, the Republican-controlled state has focused on culture-war, wedge issues, such as a year-long debate to allow "intelligent design" to be taught in Ohio's public schools as an alternative to evolution; enacting one of the most far-reaching gay marriage bans in the country (which also prevents unmarried heterosexual state employees from extending benefits to their domestic partners); making it legal to carry a concealed weapon; and introducing a resolution to declare the Ten Commandments the moral foundation of Ohio's government. As one Cleveland city councilman told Cleveland Scene, an alternative weekly paper, "The Dukes of Hazzard have taken over Columbus. Next thing you know, we'll be installing outhouses."

Ohio Democrats wring their hands about how this state -- which once had two solidly Democratic senators, John Glenn and Howard Metzenbaum, and a majority in the statehouse -- came to be controlled by Republicans. Aside from Ohio's Supreme Court, there isn't a single Democrat elected statewide in Ohio and there hasn't been for years. For all the same reasons that Ohio is a microcosm of the country, it swung Republican in the early 1990s just as Newt Gingrich took over Congress. The Ohio Democratic Party was lackluster, there was no effort to build a farm team, and Ohio was allowed to Balkanize into urban, suburban and rural districts, with the latter two going largely Republican. But now with corruption investigations rocking top Republicans and Gov. Bob Taft's approval rating around 40 percent, Ohio Democrats are cautiously optimistic that the party will be able to revive itself by piggybacking onto all the activity here during the presidential election and making an issue of the state's horrendous economic performance.

"This is the largest and most sophisticated voter mobilization effort in history," says Sarah Leonard, who's with the national ACT organization in Washington. "We are sending canvassers to doors with Palm Pilots in hand. Throughout the conversation, data is logged into the Palm, and at the end of the night, when the canvasser is finished, they'll sync that info into a database. So if 'Judy Smith' is interested in education issues, that information is used to target messages to her and continue the dialogue. We'll send her information on a flier or through a phone call about education issues."

One suburban Cleveland woman, for example, was highly impressed when a young, earnest ACT canvasser not only seemed to have a handle on the issues affecting her neighborhood, but showed her a 30-second advertisement from her Palm Pilot. "We're marrying technology with grass-roots organizing. It's never been done at this level before," says Leonard.

Jess Goode, communications director for ACT-Ohio, says that over the past year, 250 canvassers have knocked on a million doors in Ohio and the goal is to knock on a million more by Election Day. "We're not just dropping off literature and never talking to people. We're returning two and three times to people's doors and engaging them in conversation about the issues that concern them. This is the seventh largest state in the country. It should be prosperous and it's not."

Not to be outdone, MoveOn and Bruce Springsteen recently announced they are teaming up to put on a dizzying number of concerts in Ohio on Oct. 2, the day before registration closes. Bands affiliated with Springsteen's Vote for Change will be playing all over the state that night, including the Dave Matthews Band, Pearl Jam, the Dixie Chicks, John Mellencamp, Bonnie Raitt and others.

MoveOn's PAC has also launched a major grass-roots organizing effort called Leave No Voter Behind. According to Josiette White, MoveOn PAC's Northeast Ohio field organizer, $5 million will be spent in swing states to bring out volunteers and register new voters. She doesn't know exactly how much of that will be spent in Ohio, but it's safe to say it'll be a good portion.

"We had an initial organizing meeting here in Cleveland," says White. "I was expecting about 100 people; 250 people showed up. There's this amazing synergy and energy. We're ready to take back our democracy in a true and literal way. People are constantly saying they've never been involved in politics before. I'm not willing to let Ohio come up red. Ohio is coming up blue this time, and everyone's going to be a part of it. Once the election is over, in a perfect world, there will be a whole new group of future progressive leaders that will emerge."

Among the projects concentrating on Ohio is a youthful arts-affiliated PAC called Downtown for Democracy, formed in New York City, which will be loading up buses full of volunteers in their 20s (many of whom have never voted before) to help rally the under-30 crowd in the Buckeye State. Everyone from designer Marc Jacobs to filmmaker Richard Linklater, along with seemingly every new bar, club and restaurant in New York City, is showering the organization with donations, time, space and cachet. This new group has teamed up with 21st Century Democrats/VoteMob in Ohio, which will do more traditional get-out-the-vote while D4D will entice kids to register by throwing DJ parties in Columbus, Cleveland and Cincinnati. In exchange for free beer and politically provocative T-shirts, e-mail addresses will be collected so potential voters can be informed about issues and reminded about where and when to vote.

Will this whirlwind of activity in Ohio give the Kerry-Edwards campaign an edge? A CNN/USA Today/Gallup poll of 761 registered Ohio voters, conducted between Aug. 13 and Aug. 15, showed Kerry at 50 percent, followed by Bush at 41 percent and Ralph Nader at 5 percent. When only likely voters are included, Kerry's advantage dropped to 47 percent to Bush's 45 percent with 4 percent for Nader. But MoveOn's Northeast Ohio field organizer doesn't think polls are terribly reliable at this point, as newly registered voters aren't included.

Economic trends, at least, do seem to herald bad news for Bush. Not only has Ohio hemorrhaged jobs, it's also losing more people with college degrees than any other state in the country, according to the New York Times. While other states worry about a housing bubble, real estate prices here are depressed. The Corporation for Enterprise Development gave Ohio's economic performance a D grade in its annual report card. A ballot initiative to provide seed money for economic development failed while the sales tax has been increased. Education funding has been drastically cut.

None of this, however, seemed to be on the minds of three Republican-leaning men sitting at the bar where Susan Sarandon and company had just, with impressive sincerity, beseeched people about the need to educate Ohio's voters. They said they were at the bar independently of the event, adding that they would be voting for Bush in November because of the war in Iraq. It wasn't necessarily a good thing to have gone to war, they agreed, but now that we're there, only Bush could bring this to a good conclusion. They view Kerry as a wishy-washy politician who would do more harm than good. One even claimed to have voted for Gore.

Another unsuspecting bar patron, however, offered one of the exhausted celebs a bit of encouragement. After Julianna Margulies emphasized women's issues in her halting but heartfelt speech, a young woman approached her and said she wasn't there for the fundraiser and in fact is a Republican. But she told Margulies she gets it now, and will be voting for Kerry.

In Ohio, it's one voter at a time.