It took the slow boat from China, but Zhang Yimou's dazzling martial-arts epic has finally come to American movie theaters. It was well worth the wait. 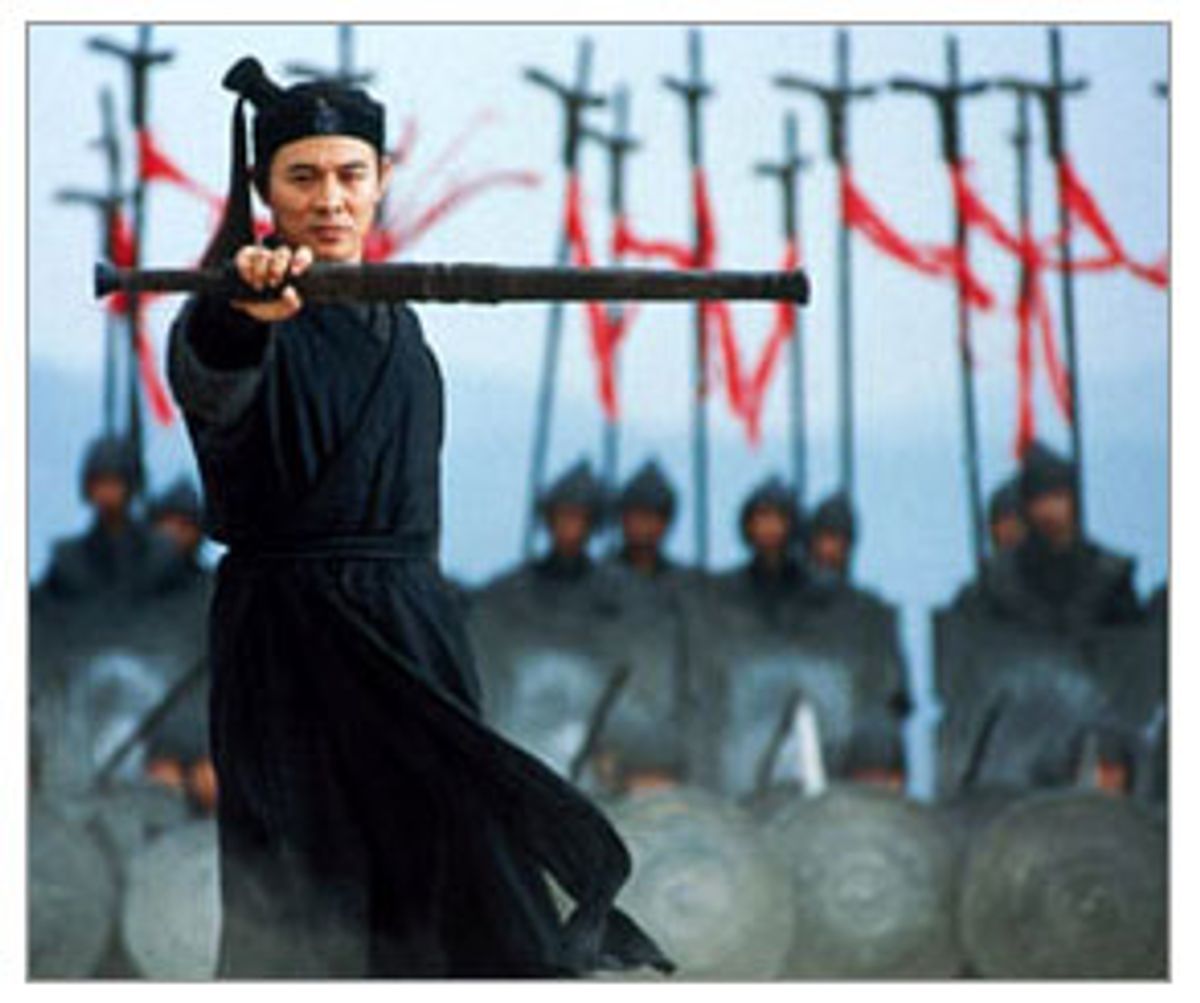 Adventure movies usually go by at much too fast a clip to be described as reveries. By applying that word to Zhang Yimou's martial-arts epic "Hero" -- finally, finally arriving on American screens after a two-year wait -- I don't want to give the impression that the movie is in the static tableaux-style that made Zhang's earlier movies like "Raise the Red Lantern" so lifeless. "Hero" may be more contemplative than visceral but I think you'd have to be dead not to be thrilled by it. It's not too much to say that "Hero" is one of the most ravishing spectacles the movies have given us.

A director who takes on a movie of this scale for his first foray into martial arts is setting himself a daunting task. The incredible speed of the great martial-arts performers requires a director who can keep pace, who can render the lightning-fast moves clear to the audience. There are sequences of one-on-one combat in "Hero" that feel as if they are whizzing by us while still imprinting every movement on our mind's eye. When Zhang and his editors Zhai Ru and Angie Lam intercut a fight between Jet Li and Donnie Yen with shots of rain dropping onto a chessboard, or a musician's hands strumming his instrument (each note counts in Tan Dun's spare score), everything on screen seems to be moving to the same enveloping rhythm. Perhaps more than any other martial-arts movie, "Hero" makes us feel what it means to experience the harmony that the genre's characters are always claiming they seek in their craft.

Zhang isn't afraid to take his time to set up a sequence. In one shot, Li runs in slow motion through raindrops that look as if they are suspended in midair. He can also thrust us into the middle of the sudden chaotic spectacle of Li and Maggie Cheung bursting through windows like whirling dervishes to fend off swarms of deadly arrows sent sailing through the skies by impossibly vast armies.

The tone of "Hero," austere and elegiac, is far removed from the self-parodic derring-do of Western adventure tales from Alexandre Dumas to Douglas Fairbanks and beyond. But the tone is appropriate for a Chinese filmmaker working in the long tradition of the wuxia (the Chinese martial arts genre) tale. And a Western viewer can't help but see the links between a performer like Li and Fairbanks -- even though Li is aided by process shots, they both delight us with the sheer physical improbability of their movements.

The story of "Hero," set in the third century, centers on Nameless (Li), a rural prefect who has been summoned to the palace fortress of the King (Chen Daoming, whose performance has a subdued sly wit) to be honored for defeating the assassins who have been out to kill the monarch for 10 years. What follows are three versions of Nameless' involvement with the assassins, Sky (Yen), Flying Snow (Cheung) and Broken Sword (Tony Leung), and Broken Sword's assistant Moon (Zhang Ziyi). Unlike "Rashomon," to which "Hero" has been compared, there is finally no ambiguity about what happens. The third telling of the story arrives at the truth. What the events mean is another matter.

In America, the main controversy surrounding "Hero" is why it has taken so long to open. There appears to be no real reason beyond Miramax's usual perfidy when it comes to dealing with Asian films, and the meddling of mogul Harvey Weinstein who's come to be known as Harvey Scisscorhands. At less than 100 minutes, "Hero" was reportedly still too long for Weinstein. The movie is appearing under the imprimatur of Quentin Tarantino, who apparently forced Weinstein to restore the cuts he had made. Asian film fans, fed up with Miramax setting premiere dates that came and went, went online to Chinese video stores to buy import DVDs (as they did with "Shaolin Soccer" and have done with the upcoming police drama "Infernal Affairs," which Miramax is opening here on Sept. 17).

Another controversy has been brewing since the movie's 2002 release in China (where it is not only the most expensive movie ever made but the most successful) and Hong Kong. Zhang's detractors accuse him of everything from making a movie that kowtows to power to one that embraces fascistic nationalism. In the film, the King explains that he intends to conquer all of China's provinces for the purpose of uniting them, and he says that sometimes the happiness of the individual has to be sacrificed for the good of the many.

Apart from the offensiveness of charging a filmmaker whose films have been banned by the Chinese government -- and who has been prevented from traveling to collect the honors those films have garnered -- of suddenly licking the government's feet, the anti-"Hero" arguments don't take into account that the film ends not in a surge of patriotic feeling but on a pronounced mournful note of contingency and skepticism. And they ignore how the movie forces the King to live up to the ideology he so glibly spouts about sacrificing the happiness of the individual for the good of all. In our final glimpse of the King, the man has been dwarfed by the trappings of his power.

The real shame of the political quibbling that has taken part in some quarters over "Hero" is that those arguments have nothing to do with how enjoyable the film is. Above everything, it's a great adventure tale with both scenes of individual combat and battle scenes whose grandeur and geometric formations of troops recall Akira Kurosawa and the Stanley Kubrick of "Spartacus." Zhang renders the martial-arts scenes lyrical without blunting their excitement. When Nameless and Broken Sword face off on a secluded lake, the camera goes underwater so we're looking up at the ripples their feet make as they gently disturb the surface. The finale of a showdown between Flying Snow and Moon is just as breathtaking, with a landscape of golden leaves turning a vivid red before our eyes.

Each section of the film is shot primarily in one shade -- red, blue, green, white. "Hero" suggests that -- after his work on "The Quiet American," on the current "Last Life in the Universe" and with Wong Kar-wai -- Christopher Doyle may be the greatest cinematographer now working. The movie is utterly gorgeous to look at but Doyle's work is never merely "pictorial." It always has the dramatic impetus of the scene in mind. He is a master of lighting, shading, hues and precise yet subtle camera movement and is one of the least fussy masters imaginable. And as dazzling as the landscapes are, the close-ups are just as beautiful. At times, "Hero" might be an essay in the art of the close-up. Doyle and Zhang bring us so close to the actors that we become privy to the tiniest gradations of mood.

During the last two decades, Asia has produced more than its share of genuine movie stars. For fans of Asian movies, the quartet of stars in "Hero" are a dream combination. For American audiences who haven't encountered them before, seeing them could be a revelation.

Li has the hardest role, requiring a stoicism and carrying the ambiguity of the movie's title on his shoulders. Leung (as he does in "Infernal Affairs") has the sort of understated masculine presence that we associate with the likes of George Clooney. Ziyi, as she's shown before, manages to combine moments of reticence with sudden firecracker eruptions. And Cheung is simply extraordinary. If this performance had been given in a silent movie, it would be legendary by now. For most of her screen time in "Hero," there's a profound stillness to her. She lounges with the indolence of a cat and her eyes are capable of transmitting hauteur, disdain, wounded eroticism and unutterable sadness. In "Hero" Cheung exudes a poetry and mystery that's Garboesque.

"Hero" took so long to be released here that Zhang's next film, "House of Flying Daggers," another martial-arts picture starring Ziyi, is finished and will be out here at Christmas time. Zhang's career is turning out to be a particularly interesting and varied one. After the subdued (too subdued for me) style of his early films, the gangster pastiche "Shanghai Triad" showed a fondness for melodrama that hadn't been evident. And two films that followed, "Not One Less" and "The Road Home," were the exact opposite -- exquisite pieces of humanist filmmaking in which Zhang removed all the barriers between us and the characters. "Hero" is yet another twist, the sort of crowd-pleaser no one seems to make anymore, which is to say one that doesn't dumb itself down in search of a wide audience. He hasn't just made a great, romantic adventure tale -- he's made a rare film that delivers gravitas with grace.