Diego Luna -- who seems to be everywhere since his simmering role in "Y Tu Mama Tambien" -- talks about fame, a city full of the GOP, and why a film star can't make a living in Mexico. 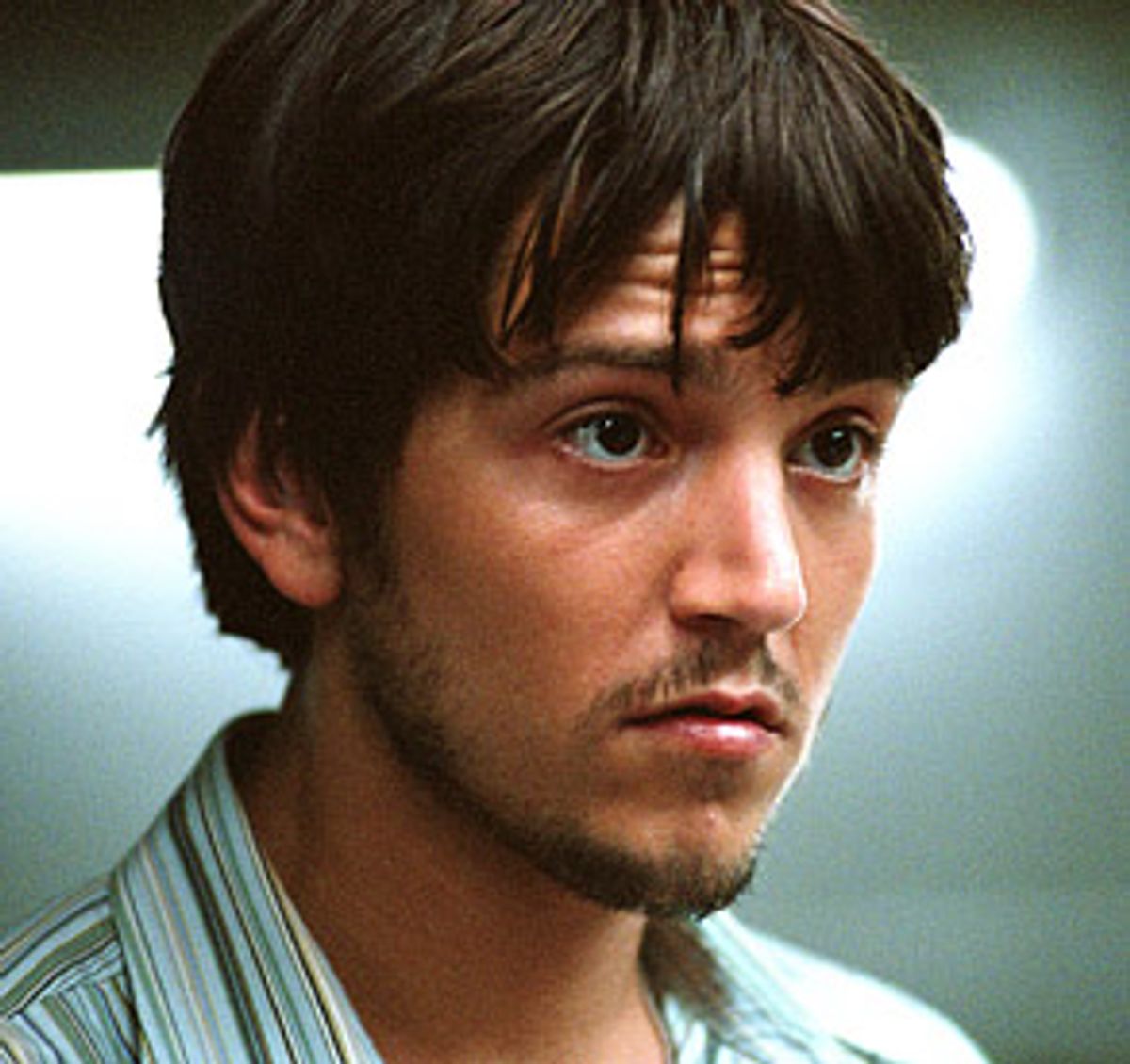 "Y Tu Mamá También" has become such shorthand for pure cinematic turn-on -- surf the Nerve personals and you'll find it referenced more than any other film when respondents of all persuasions name their "favorite on-screen sex scene" -- that it could prove either a great blessing or a terrible curse for the film's two male stars, Diego Luna and Gael García Bernal, who were both in their early 20s when the 2001 film launched them into international stardom.

Since then, Bernal seems to have decided to hover close to home, appearing in mostly Spanish-language films like the upcoming "Motorcycle Diaries" and Pedro Almodóvar's "Bad Education." Luna, on the other hand, has been sampling every cinematic morsel he can get his hands on. In the past three years, Luna not only appeared in a number of Mexican films (including the dark and smoky "Nicotina") but also dressed up (and stripped down) with Salma Hayek in the costume drama "Frida"; galloped across the Old West in Kevin Costner's "Open Range"; and gyrated his way into the American canon (of sequels, at least) with "Dirty Dancing 2: Havana Nights." Earlier this summer, Luna landed in multiplexes as part of the ensemble cast in Tom Hanks' Hollywood blockbuster, "The Terminal."

And now Luna, 24, is starring in "Criminal," a little film with big dreams that provides clues to Luna's future as an actor. "Criminal" is an adaptation of the Argentinian caper flick "Nueve Reinas." As he did in "Y Tu Mamá También," Luna will be sharing almost every frame of the film with a talented male costar (this time John C. Reilly). And as "Dirty Dancing 2" and "The Terminal" did, this film will expose Luna to Americans who are still just beginning to recognize him on the street. But unlike anything else he has done, "Criminal," which is backed by industry heavyweights George Clooney and Steven Soderbergh, could give Diego Luna what he seems to want most: more leading roles in American films. It could be the vehicle that carries him out of Mexico (where he's already a superstar) and into the American mainstream. However, he tells Salon, he's not planning on moving to Hollywood anytime soon.

When Salon met Luna in New York for coffee, he was dressed in a long-sleeve black T-shirt, broken-in jeans, blue suede sneakers and a very sleepy-eyed expression at the early hour.

So, are you familiar with Salon.com?

It's OK. I just wanted to explain, it's an online magazine.

No. Unfortunately, I don't think we have it in Mexico.

Yes, you do, if you have Internet access. You can go online and read it.

Yeah! I think so. Sing me the song.

Sing the song. The Salon song ... [Looks encouragingly at me.] I kind of remember it...

Hmm, there is no song. [Awkward pause.] So, what do you think of New York?

I love it! -- I just hate it while this [the Republican National Convention] is happening. It's not a nice time to be here.

The city has a weird vibe right now.

It has a very, very weird vibe.

Have you seen any protests while you've been here?

Yes! Well, just on the TV ... Oh, and I've seen all the guys running. The ones with the T-shirts, that say "Run Against Bush."

I know that group! You probably saw my boyfriend.

Really? That's so cool! Yesterday we were stepping into the hotel with all our stickers that said "Run Against Bush" and ... it was packed with people here, police guards and everyone. They were looking at us like, what are you doing? And they followed us to the room ... it was weird. Bad.

So are you comfortable talking about politics, as an actor?

I just hope that young people in America will start to be more critical and more politicized. If we really want things to change one day, it has to be the young people. And young people should be more aware of what's going on in the world. They need to know how much American politics affect the rest of the world. They have to be responsible and critical.

I promise I won't ask you too many questions about "Y Tu Mamá También." I've been doing research, and every single interviewer goes on about the film. Do you ever get sick of talking about "Y Tu Mamá" and the infamous ménage à trois with Bernal and Maribel Verdú?

No. I will never feel sick about talking about that movie. I feel proud of what we did in that movie. That's a very important movie for me in many ways, and I still love it. For me it's great to see how much people in the world care about that movie.

Since "Y Tu Mamá También," you've done a grab bag of different movies. Do you have in mind a specific direction where you'd like to take your career, whether it be Mexican films plus small American films, or do you want to move toward big Hollywood movies?

I've done just one really big American film ["The Terminal"] and I was only there for three weeks. That's the first time I've seen such a big thing going on, you know? So yeah, I'm still exploring. I want to do different things. I know I always want to be able to work in my language. I always want to have one foot in Mexico.

Just by being there. Because if you just leave Mexico and start to work ... if you don't make yourself time to work in Mexico, I'll never be back, you know? Because it's really tough to plan things in Mexico. For example, the movie I'm doing now, I've been wanting to do this project for the last two years. We just got the money three weeks ago when we started shooting. You can't go to another country and say, "OK, I'll be back! I have from February to March to go shoot in Mexico," and then leave. Because you come back in February and things are the same. You have to be there to make things happen. I want to always have the chance to do that. And also to work here in the States.

"Criminal" is closer to the movies I like. Of everything I've done in English, "Criminal" is definitely the closest to the movies I like and want to be in. But that doesn't mean that I'm not going to explore different things, and I'm not going to do a horror movie one day, or a comedy. Who knows? But this is the movie I like when it's all about the story and the characters. Basically, great stories bring fantastic people. Good scripts bring the best crews.

Are there a lot of opportunities for you in Mexico?

There's not too much opportunities in Mexico for anyone. Basically there are ideas, projects ... But from that point, to get the money together and start to shoot a movie, there's a big difference. The problem is that in Mexico, Mexican movies are not a business yet, for the people that invest money.

It's because the law. There's not a single law to protect producers, to protect filmmakers. Basically, every producer gets 15 percent of the money that the movie makes. Just 15 percent! These guys are the ones that invest maybe five years before the movie is released, they get everyone together, they pay everyone, they shoot a movie, they go edit, they have the movie ready, and then, that's when the distributors come to the table. And these guys get 85 percent. So basically, lots of people are getting rich before producers. Once the money starts to get to the producers...

I think that future of Mexican film is all the people in school now and finding out that they want to do movies. And I'm really glad because if I stay here, I'm going to be able to work with all this generation, the young people that doesn't even know they're going to make movies. They're coming and I'm 24, so I'll be there.

Do you still keep in touch with your childhood friend [and "Y Tu Mamá" costar) Bernal?

Yeah, as much as we can.

How often do you talk?

Oh, I dunno ... It depends on what's going on in our lives. Sometimes we talk every day of the week and sometimes we don't talk for a month.

What do you talk about? How hard it is to be a movie star, how hard it is having all these girls crazy around you?

Gael is doing a lot of films now, too. Do you feel that your careers are moving in the same direction?

No, very different directions. But they're moving, which is fun, and they're going forward. Basically, no one can ... you can't repeat a career. That's always the biggest mistake. You can have idols, you can have heroes, you can believe in people. In this business everyone has a different start, and if you try to plan it too much, then something always goes wrong. You know what I mean? We're doing different things, very very different things, but we're doing movies and that's what we love.

I saw your latest movie, "Criminal," the other night. Tell me what attracted you to that film.

Most of the movies, there's a kind of coldness about the characters. You don't really get to relate with them. They're so cold, and these guys are more real, they're not good or bad, just real. I like that about the movie. And I like that L.A. becomes a character in the movie. It's a chance to know a beautiful city where so many cultures live but they don't really mix. There are so many frontiers inside L.A.

There is no real good guy or bad guy. That's unusual for American movies. We like "heroes" vs. "villains."

Yeah, yeah. That happens a lot. I think all people have an evil side. The good movies are the ones that explore that part of people. That's the part I care about; that's the interesting part. But then again, I have to say that you can't really generalize, because there are a lot of very cool American films, very smart scripts and honest movies.

Like what? What American films have impressed you recently?

There's an important line in "Criminal" where your character says something like "I don't like to be without a woman." Is that true for you in real life?

Um ...[Clanks spoon against cappuccino cup.] I think the only reason we're here in life is to be happy and to make someone happy. When you're in love, everything in life seems to be better. Yeah, that's how things should be.

Are you making somebody happy now?

Well, I am really happy and trying to make someone happy.

How much time to you spend in the U.S.? Are you mostly full time in Mexico City?

I have the same problem that Hannigan [Peter Mullan's character] has in the movie. Do you remember that?

Yes, he has to leave the USA suddenly...

Who are some of the actors you admire? When you think about where you want to take your career, the movies you'd like to do, who comes to mind?

I noticed you selected some American actors, some Mexican and Spanish. Was that on purpose? Are you trying to blend your career to be a hybrid of styles?

What are the major differences between American actors and Mexican actors?

In the U.S. you can make money from movies. In Mexico, you have to do other things [like television] to make a living.