The eerie photos at the center of a "Six Feet Under" plot turn get an L.A. artist the audience he always wanted. But is Claire Fisher getting all the credit? 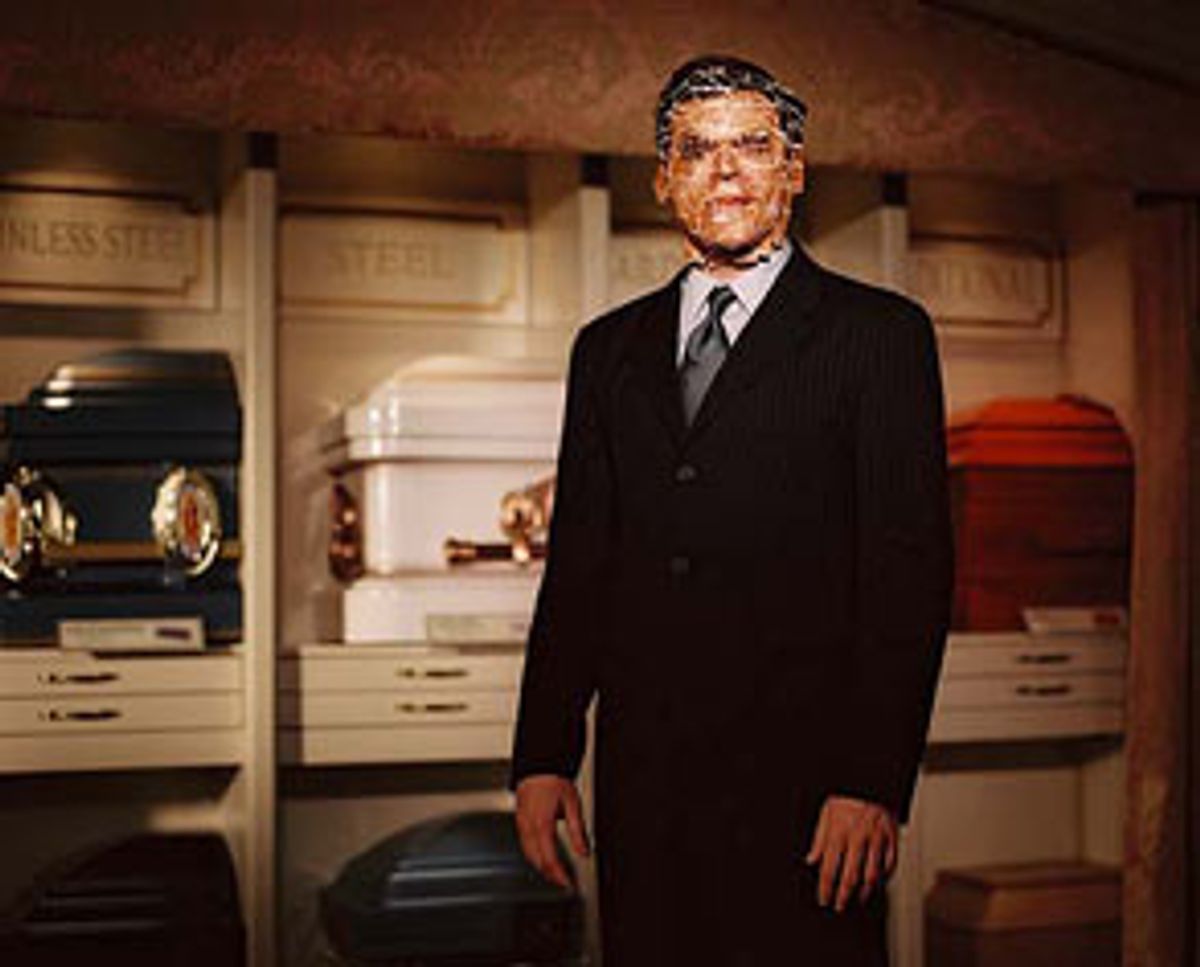 The denouement of this season's "Six Feet Under" (season finale Sunday, 9 p.m., on HBO) focuses on creativity itself. Claire (Lauren Ambrose) and her ex-boyfriend Russell (Ben Foster), both art students, are lounging around her apartment stoned. Russell rips out the eyes from a photo of Claire and places them on her lids. She asks him to take a picture, and a photographic concept is born -- one that gives Claire status and a gallery show, but leaves Russell unrecognized.

David Meanix, the Los Angeles artist responsible for the haunting and disturbing photo-collage portraits used in the show, is a real-life Russell. In a bizarre postmodern media twist of life imitating art imitating life, he has been glued to the television each week watching Claire get the credit for his brainchild. He admits to having the same fear as Russell: "I don't want to be unrecognized and have it be 'Claire's work.'"

But mostly, he's thrilled to have an outlet for his work. "I was a huge "Six Feet Under" fan," says the previously unknown Downingtown, Penn., native who pushed hard for his artwork to be on the hit program. "The minute they hinted that Claire was going to art school, fireworks went off telling me that my work should be Claire's work." For two years he hounded Emmy-nominated art director Suzuki Ingerslev.

She finally caved. He was commissioned to do portraits of David (Michael C. Hall), Nate (Peter Krause), Ruth (Frances Conroy) and Anita (Sprague Grayden) to be used on the show. The four-hour process began with Meanix photographing the actors with a 35-mm camera with a macro lens, shooting minute swatches of each part of the face, "focusing on the pores." He printed the photos in actual size, color-copied them, ripped them, and then plastered each paper shard back onto the face, creating the puzzlelike "mask." Each actor donned the dry mask to pose for a final portrait photograph. Krause was lucky that the props department already had a model of his face on hand (from another season's 'death fantasy montage' sequence), so he didn't have to suffer through the plaster facial.

Meanix hopes to do more, "that people will be daring enough to sit through the process to get their portraits done." Despite the hours of stillness involved, the artist says that his work is about motion and dimension. "I'm inspired by anything that captures the grace of movement, that brings photography into three-dimensional space," he continues, "Like dance and sports photography, and the work of Herb Ritts."

Meanix also cites British artist David Hockney as an influence. Ironically (or not?), on the show, Claire's teacher compares the artwork to Hockney's collage photography, yet back here in the school of hard knocks, Meanix admits, "No one's pounding down my door [to buy the work]."

But he has managed to create a cultish buzz around his work in L.A.'s hip inter-media circles. West Hollywood artist Jena Cardwell first encountered his art in a little gallery in the San Fernando Valley. As an avid "Six Feet Under" fan she was pleasantly shocked to revisit it in the show. "I was totally blown away. It's different than anything I've seen," she enthuses.

Meanix's process has also evolved from the rudimentary black-and-white versions of his collage portraits to the show's rich contextual color images (Ruth Fisher, for example, sits at the dinner table for her portrait). Beyond this, Meanix is trying to delve further into the realm of 3-D by creating photo-collage portrait busts. He explains: "My next thing is to focus on a new body of work," literally and figuratively. His latest piece, a 3-D body sculpture of a nude man, lies in the middle of the floor of his atelier, like a "human" pet.

Nevertheless, the "Six Feet Under" series of works is creatively raw, which is what makes it interesting as well as believable as the fabrication of a rookie artist. "I like the amateur feel of my work," Meanix says. He recalls coming up with his "photo-sculpture" technique in the early '90s, when he was "a big stoner too." Like Claire, he had started out doing a lot of more traditional self-portraits while studying interdisciplinary art at San Francisco State University. As he explored the collage concept, it developed into his senior project. But because he was late turning it in, he never got his official classroom critique.

Things have a way of coming full circle. Almost a decade later, Meanix sat in front of a TV set surrounded by friends, transfixed as a classroom of wide-eyed art students and a teacher investigate his creative work. "It was so weird. It was amazing," he recalls. "I feel like I finally got the great crit that I never had."