This stunning film from Taiwanese director Tsai Ming-Liang is virtually wordless, yet speaks volumes about what it means to love the movies -- and the cavernous theaters in which they once played. 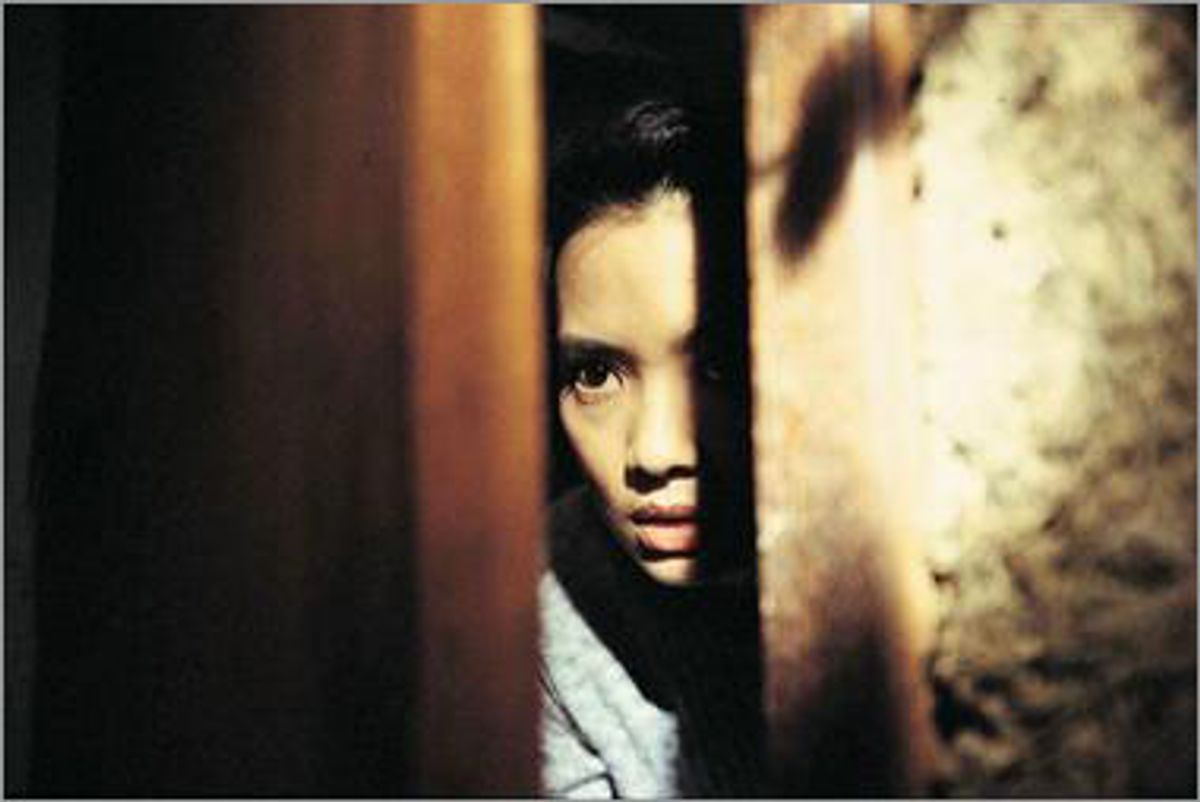 We often speak of moviegoing as a communal experience, a way of bonding with others over the images in front of us. But moviegoing is more like a very public kind of intimacy: When groups of us gather in a theater, we may be seeing the same images, but we're never seeing the same movie. The one-to-one relationship each of us builds with the picture in front of us may have its shadow twin in the viewer sitting right next to us, but it can never be identical.

Even so -- and despite the unassailable convenience of watching movies at home on DVD -- most people who love movies yearn to be part of the life of an audience, at least part of the time. Huddled together in our isolation, we're reminded how alone we are, and at the same time, that we're all in it together.

Taiwanese director Tsai Ming-Liang's stunning "Goodbye, Dragon Inn," which takes place in a faded, decrepit Taipei movie palace on the night of its last-ever showing, is a paean to the togetherness of isolation among moviegoers. There are two sets of characters in "Goodbye, Dragon Inn": those in the movie that's being shown -- King Hu's lush-looking 1966 swordplay classic "Dragon Inn" -- and those who sit in the seats as it unfolds before them, either romantically rapt or comically distracted.

Which group is more ghostly, and which more alive? There's no specific answer, the suggestion being that whenever we give ourselves over to movie images, in some ways we become ghosts ourselves, while the celluloid figures in front of us can seem more real than our flesh-and-blood neighbors.

If you've never seen a Tsai Ming Liang picture, you should be forewarned that there's no real plot in the 81-minute "Goodbye, Dragon Inn" -- only delicate traceries of feeling, conveyed by sound and images and actors' faces, that, by the end, become nearly overwhelming. Save for the snippets of dialogue that drift to us from the movie-within-the-movie, "Goodbye, Dragon Inn" is virtually wordless. Tsai tells us everything with his long, unbroken shots, capturing the essence of the theater as if it were a human character.

Cinematographer Liao Pen-Jung's camera shows us desolate corridors (graced by a scurrying, secretive cat or two) and cluttered storage rooms, a small corner of the projectionist's cramped lair, a lobby lined with brightly colored posters that might look garish if they weren't so inviting. These are all places that should be empty and silent while Hu's "Dragon Inn" is living its life on-screen -- like a rare insect that lives only while there's an audience to observe it -- and yet Tsai shows us how life spills into them even while the movie's running.

The ticket girl (Chen Shiang-chyi), a mousy but pretty young woman who walks with a limp, passes the time until the movie's over, at one point heating up a sweet bun in her rice cooker. She saves half of it and carries it to the projectionist (Lee Kang-Sheng, the marvelous actor with whom Tsai always works) in his room, and although he isn't there, she leaves it for him as a wisftul love token (although later, when she realizes he hasn't touched it, she sensibly reclaims it for herself).

Everywhere Tsai takes us, the theater is thrumming with near-silent life. A young Japanese man (Mitamura Kiyonobu) has wandered into the theater to take shelter from the pouring rain outside; he pays little attention to the movie in front of him -- he's more interested in cruising for a lover -- and yet he can't help noticing that one of the men he appraises in the audience (Shih Chun) bears a striking resemblance to one of the actors on-screen. And in another section of the theater, an old man (Miao Tien, who has appeared in several of Tsai's other pictures, including "The River," "The Hole" and "What Time Is It There?") sits with his young grandson, absorbing the picture before them as if it were sunshine.

The specifics of what happens in "Goodbye, Dragon Inn" are barely significant: What really sticks with you is the picture's aura of twilight vibrancy, and the deep pleasure Tsai takes in savoring subtle emotions that other filmmakers might not even register.

The theater in which Tsai filmed the movie -- it's called the Fu-Ho -- no longer exists. He found it while he was shooting 2001's gentle but ardent "What Time Is It There?" He was taken with it because it reminded him of the old theaters he remembered from his childhood in Malaysia -- his grandfather began taking him to the movies at the age of 3. After learning that the Fu-Ho was scheduled to be torn down, he rustled up the money to shoot "Goodbye, Dragon Inn" there.

The Fu-Ho isn't particularly lavish, but with its rows and rows of raked seats, it represents a confidence that's almost boastful. The Fu-Ho is a relic from the days when a theater had to be big to contain the masses who were eager to come out and see movies; its cavernousness is a kind of generosity, especially compared with the pinched, miniature shoe boxes that so many once-large movie theaters have been subdivided into. Our first look into the theater is startling: Beyond a drifting velvet curtain, we glimpse a sea of heads, brushed with beams of light from the projectionist's booth. It's pleasing to see such a big turnout for an old, ostensibly forgotten movie.

But that audience may be just an illusion. Before we know it, that hearty bunch has disappeared, leaving only a scattered handful of viewers, including that young Japanese tourist and a big-haired tootsie noisily eating peanuts and scattering the shells on the floor. A character in "Goodbye, Dragon Inn" remarks that the theater is said to be haunted, which leaves us to wonder: Was that earlier, packed audience we saw made up of ghosts -- ghosts from a time when people cared deeply about the pleasures that movies have to offer?

"Goodbye, Dragon Inn" hits some mournful undertones. We learn that two of the men who came out for this last Fu-Ho showing of "Dragon Inn" were stars in that very movie: They greet each other warmly in the theater lobby afterward. "No one comes to the movies anymore," says the older of the two, Miao Tien. "And no one remembers us anymore," responds Shih Chun (who was King Hu's lead acor, just as Lee Kang-Sheng is Tsai's). Their voices are redolent with a sense of loss, and earlier, Tsai's camera lingered on Shih's face as he watched the movie: It was almost expressionless except for the faint shimmer of tears welling in his eyes, tears devoid of sentiment but loaded with feeling.

"Goodbye, Dragon Inn" is openly elegiac, and yet it's far from depressing. Maybe that's because Tsai's movies are always less concerned with mourning the past than they are with connecting it to the present. The Fu-Ho shuts down once and for all: The projectionist pulls down its corrugated door with a mighty clang before taking off on his motorbike, and the ticket girl, who has been lurking in the shadows for a last glimpse of him, emerges into the rainy darkness to slowly make her way home.

But even then, Tsai gives us a twinge of hope that the two of them will see each other again. The projectionist has noticed that the ticket girl has left her rice cooker behind. He scoops it up and carries it off with him on his bike, perhaps to bring it to her.

Sometimes the end of a movie feels like, if not the end of the world, the end of a world. Tsai Ming-Liang always makes you feel that there's a world of life beyond his movies -- a world populated by ghosts that are as real as we are.