The "war is lost"

Military experts say they see no exit from the Iraq debacle -- and that the war is helping al-Qaida. 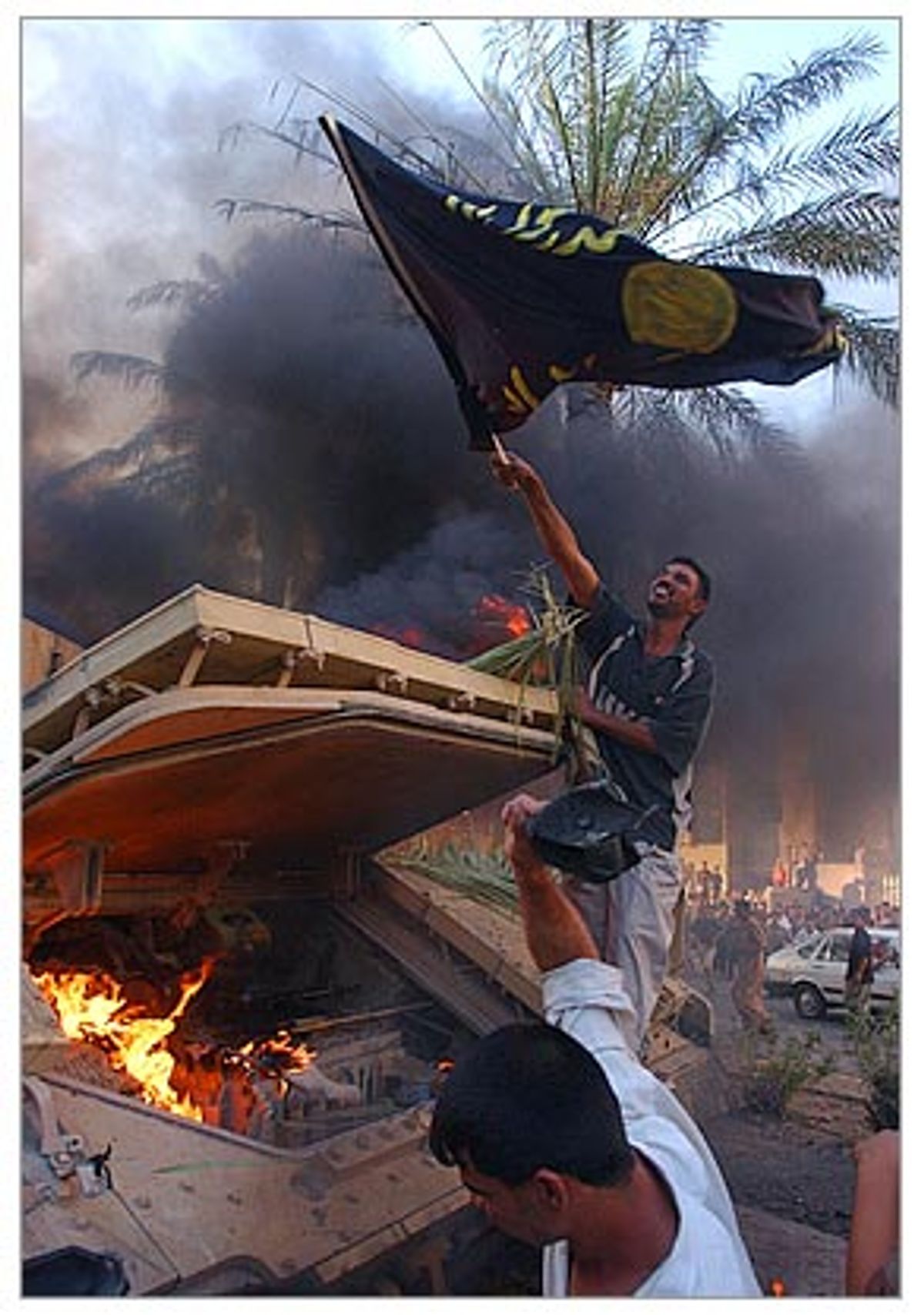 "Bring them on!" President Bush challenged the early Iraqi insurgency in July of last year. Since then 812 American soldiers have been killed and 6,290 wounded, according to the Pentagon. Almost every day in campaign speeches, Bush speaks with bravado about how we are "winning" in Iraq. "Our strategy is succeeding," he boasted to the National Guard convention on Tuesday.

But according to the U.S. military's leading strategists and prominent retired generals, Bush's war is already lost.

Retired Gen. William Odom, former head of the National Security Agency, told me: "Bush hasn't found the WMD. Al-Qaida, it's worse -- he's lost on that front. That he's going to achieve a democracy there? That goal is lost, too. It's lost." He added: "Right now, the course we're on, we're achieving [Osama] bin Laden's ends."

Retired Gen. Joseph Hoar, the former Marine commandant and head of the U.S. Central Command, told me: "The idea that this is going to go the way these guys planned is ludicrous. There are no good options. We're conducting a campaign as though it were being conducted in Iowa, no sense of the realities on the ground. It's so unrealistic for anyone who knows that part of the world. The priorities are just all wrong."

"I see no ray of light on the horizon at all," said Jeffrey Record, professor of strategy at the Air War College. "The worst case has become true. There's no analogy whatsoever between the situation in Iraq and the advantages we had after World War II in Germany and Japan."

"I don't think that you can kill the insurgency," said W. Andrew Terrill, professor at the Army War College's Strategic Studies Institute, the top expert on Iraq there. According to Terrill, the anti-U.S. insurgency, centered in the Sunni triangle, and holding several key cities and towns, including Fallujah, is expanding and becoming more capable as a direct consequence of U.S. policy. "We have a growing, maturing insurgency group," he told me. "We see larger and more coordinated military attacks. They are getting better and they can self-regenerate. The idea there are X number of insurgents and when they're all dead we can get out is wrong. The insurgency has shown an ability to regenerate itself because there are people willing to fill the ranks of those who are killed. The political culture is more hostile to the U.S. presence. The longer we stay, the more they are confirmed in that view."

After the killing of four U.S. contractors in Fallujah, the U.S. Marines besieged the city for three weeks in April -- the watershed event for the insurgency. "I think the president ordered the attack on Fallujah," said Gen. Hoar. "I asked a three-star Marine general who gave the order to go to Fallujah and he wouldn't tell me. I came to the conclusion that the order came directly from the White House." Then, just as suddenly, the order was rescinded, and Islamist radicals gained control, using the city as a base, al-Qaida ("base" in Arabic) indeed.

"If you are a Muslim and the community is under occupation by a non-Islamic power, it becomes a religious requirement to resist that occupation," Terrill explained. "Most Iraqis consider us occupiers, not liberators." He describes the religious imagery common now in Fallujah and the Sunni triangle: "There's talk of angels and the prophet Mohammed coming down from heaven to lead the fighting, talk of martyrs whose bodies are glowing and emanating wonderful scents."

"I see no exit," said Record. "We've been down that road before. It's called Vietnamization. The idea we're going to have an Iraqi force trained to defeat an enemy we can't defeat stretches the imagination. They will be tainted by their very association with the foreign occupier. In fact, we had more time and money in state building in Vietnam than in Iraq."

"This is far graver than Vietnam," said Gen. Odom. "There wasn't as much at stake strategically, though in both cases we mindlessly went ahead with a war that was not constructive for U.S. aims. But now we're in a region far more volatile and we're in much worse shape with our allies."

Terrill believes that any sustained U.S. military offensive against the no-go areas of the Sunni triangle "could become so controversial that members of the Iraqi government would feel compelled to resign." Thus an attempted military solution would destroy the slightest remaining political legitimacy. "If we leave and there's no civil war, that's a victory."

Gen. Hoar believes from the information he has received that "a decision has been made" to attack Fallujah "after the first Tuesday in November. That's the cynical part of it -- after the election. The signs are all there." He compares any such planned attack with late Syrian dictator Hafez al-Assad's razing of the rebel city of Hama. "You could flatten it," said Hoar. "U.S. military forces would prevail, casualties would be high, there would be inconclusive results with respect to the bad guys, their leadership would escape, and civilians would be caught in the middle. I hate that phrase 'collateral damage.' And they talked about dancing in the street, a beacon for democracy."

Gen. Odom remarked that the tension between the Bush administration and senior military officers over Iraq is worse than any he has ever seen with any previous U.S. government, including during Vietnam. "I've never seen it so bad between the Office of the Secretary of Defense and the military. There's a significant majority believing this is a disaster. The two parties whose interests have been advanced have been the Iranians and al-Qaida. Bin Laden could argue with some cogency that our going into Iraq was the equivalent of the Germans in Stalingrad. They defeated themselves by pouring more in there. Tragic."