Bernie Mac turns in one of the finest performances of any movie actor this year in this film about a baseball player determined to assume his place in the Hall of Fame. 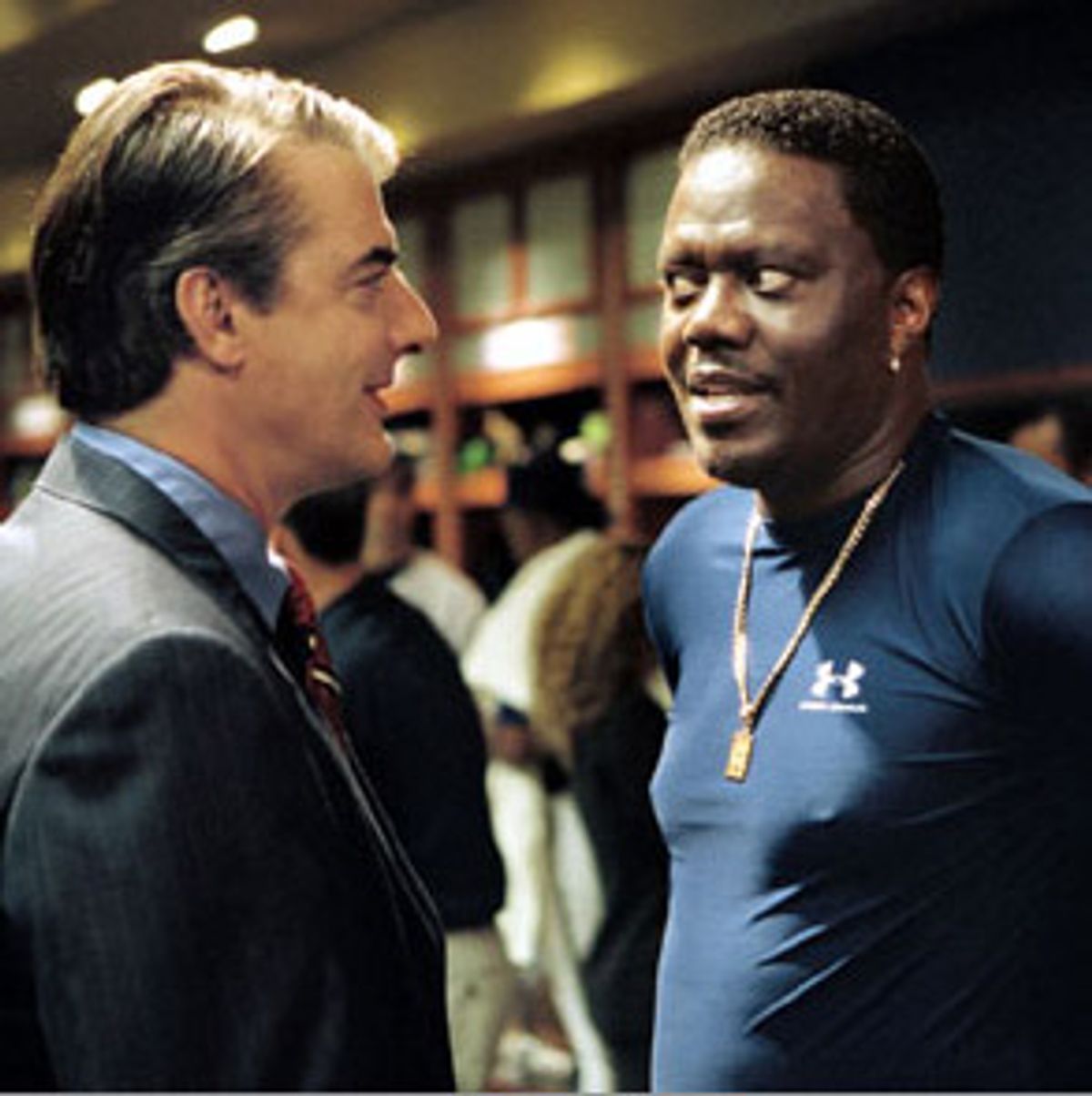 With the major Hollywood studios releasing more movies every year -- some terrific, some lousy, and many languishing in that tweedy middle ground of being just acceptably entertaining -- faithful moviegoers may sometimes have the sense that they're just watching a parade of product march by. Every Friday, there's a new set of movies being extruded through the Play Doh pumper.

It's not that the quality of mainstream Hollywood movies has necessarily fallen off in recent years; it's just that "more" isn't always necessarily better. Sorting through the available options on a weekend evening can be so daunting, it's generally easier to give up and stay at home. Critics generally don't have to sort through listings. But "Mr. 3000," the new picture by Charles Stone III -- the extraordinarily talented director of "Paid in Full" and "Drumline" -- almost makes me wish that I did, simply so I could have the pleasure of taking a chance on it and being thrilled beyond my wildest expectations.

"Mr. 3000" is a superb mainstream entertainment in the purest sense of the term: It's a picture made to please a wide audience without ever pandering to it. Bernie Mac plays Stan Ross, a pro ballplayer with a surly attitude. When he scores his 3,000th hit, he rushes into the stands to snatch the ball away from the happy kid who's caught it -- it's his souvenir, and he's not about to let anybody else walk off with it.

He promptly retires, leaving his team, the Milwaukee Brewers, stranded for the rest of the season. He uses his earnings to open a sports bar -- actually, he owns a whole mall, including a Chinese restaurant called "3,000 Woks" -- and sits back as he waits to be voted into the Hall of Fame.

But a statistics error reveals that this self-proclaimed Mr. 3000 is really three hits short of the record he's been bragging about for years. To finally get that coveted brass plaque in Cooperstown, he has to return to the game he left 10 years earlier, which means not only beating himself back into shape, but earning the respect of all the colleagues and fans he alienated with his snotty attitude.

If that sounds like your basic "Scrooge-type guy finds redemption" plot, well, you're 3,000 percent right. But "Mr. 3000" is so deftly written (by Eric Champnella and Keith Mitchell and Howard Michael Gould, from a story by Champnella and Mitchell) and so gracefully directed that you're never quite sure where it's going next -- and getting there is all the fun anyway.

It's also important to note that while "Mr. 3000" is largely about baseball, it isn't the kind of sports movie that demands that you understand the psychological (or technical) intricacies of the game from the start. Stone and his actors convey all that information beneath the surface, without clubbing us over the head with it. It's a great sports movie that effortlessly doubles as a romantic comedy.

Because "Mr. 3000" is unapologetically geared toward grown-ups, Bernie Mac gets to use plenty of foul language, often in front of children: While making an appearance at a school (the classroom is decorated with a banner declaring "Reading IZ Dope"), he lets loose among a group of innocent-looking tykes -- not surprisingly, it's the teacher who acts as if she's never heard a swear word before.

Mac is the kind of performer who has to be allowed the latitude of being improper -- it's the very thing that wins us over to his side. He's preening and self-centered, and we love him for it: At one point before his comeback, Stan struts before a stadium full of cheering fans and, catching sight of himself on the monitor, purrs, "Damn! I still look good." An articulate spokesperson for our collective id, Mac says things in polite company that most of us would only think.

But Mac's performance isn't just shtick, a collection of gags that he's able to carry off admirably. "Mr. 3000" reveals Mac (in his first starring movie role) as an actor who understands how to use his timing not just to get laughs but to build a wholly rounded character: This is one of the finest performances I've seen in any movie this year. Mac does justice to his costar, Angela Bassett, who plays Mo, the TV sports reporter he's crazy about, but who's reluctant to cement her on-again, off-again relationship with him.

In the course of her career, Bassett has gotten a few roles worthy of her gifts -- her portrayal of Tina Turner in "What's Love Got to Do with It" alone should have made her a major star. But in my estimation, one of Hollywood's gravest failings of the past 10 years is that it hasn't built great movies around her. Watching her with Mac here is blissful. Their scenes are deliciously sexy, never calculated or forced. And Bassett looks wonderful: Her character is well aware that as an on-camera commentator, the march of time and the pull of gravity are her enemies. When Mo casually mentions that fact, you almost laugh out loud: Bassett hasn't aged a whit in 10 years, perhaps partly a matter of having the most spectacularly chiseled cheekbones in the business.

Bassett and Mac are the kind of romantic-comedy dream team you get once a year, if you're lucky. Comic actors are sometimes so used to going for laughs that they can be clumsy when it comes to responding to a costar in a love scene. But even though -- or perhaps because -- Mac's specialty is a finely tuned brand of cranky acidity, his scenes with Bassett show an astonishing vulnerability. He's startlingly yielding with her, and Stone and cinematographer Shane Hurlbut keep step with him beautifully.

In one of the movie's most affecting scenes, Mo walks out on him after the two of them have just woken up from a spectacular night together. Mac, his lower half swathed in a blanket, stands at a plate-glass door and watches her leave; we can't see his face, but his stance alone tells us he's bereft. The camera, instead of bearing down on Mac, keeps its distance, as if allowing him his privacy. It's the kind of unshowy moment that represents the marvels filmmakers and actors can work when they're perfectly in tune.

Stone is a master of jazzy curlicues, and "Mr. 3000" teems with them. We get to watch the team warm up in long shot, their stretches and calisthenics choreographed to the "Dance of the Sugarplum Fairies" -- a witty touch that points up the relative daintiness of baseball uniforms. Stone hits every joke lightly on the button, instead of trying to hammer everything home. He barely shows us Mac's reaction when a Japanese teammate (Ian Anthony Dale) indignantly informs him, "You have hole in your ass!" -- he knows he doesn't need to. And all the supporting performers click, from Michael Rispoli as Stan's easygoing, tracksuit-wearing sidekick, to Chris Noth as the club's smooth-as-silk general manager, to Paul Sorvino as the team manager who nurses his grudge against Stan for just the right amount of time.

Directors are usually most highly praised when they break away from mainstream filmmaking to express some personal artistic vision that may or may not be brilliant or daring. But with "Mr. 3000," Stone pulls off something that I think is even harder. He's made an uncompromisingly grown-up comedy that any willing adult can see in any multiplex in the country.

"Mr. 3000" is smart, funny and shaped meticulously but seamlessly, an example of the great work that can come out of Hollywood when it puts the right people to work on the right material. Stone instinctively understands the difference between reaching out to an audience and stooping to it. His movie feels like a present, not a product. It makes the multiplex feel like home again.