Not quite enough A.J. Liebling

The man who brought journalism into the modern age enjoys another revival. But why is some of his best writing buried, while his worst writing is celebrated? 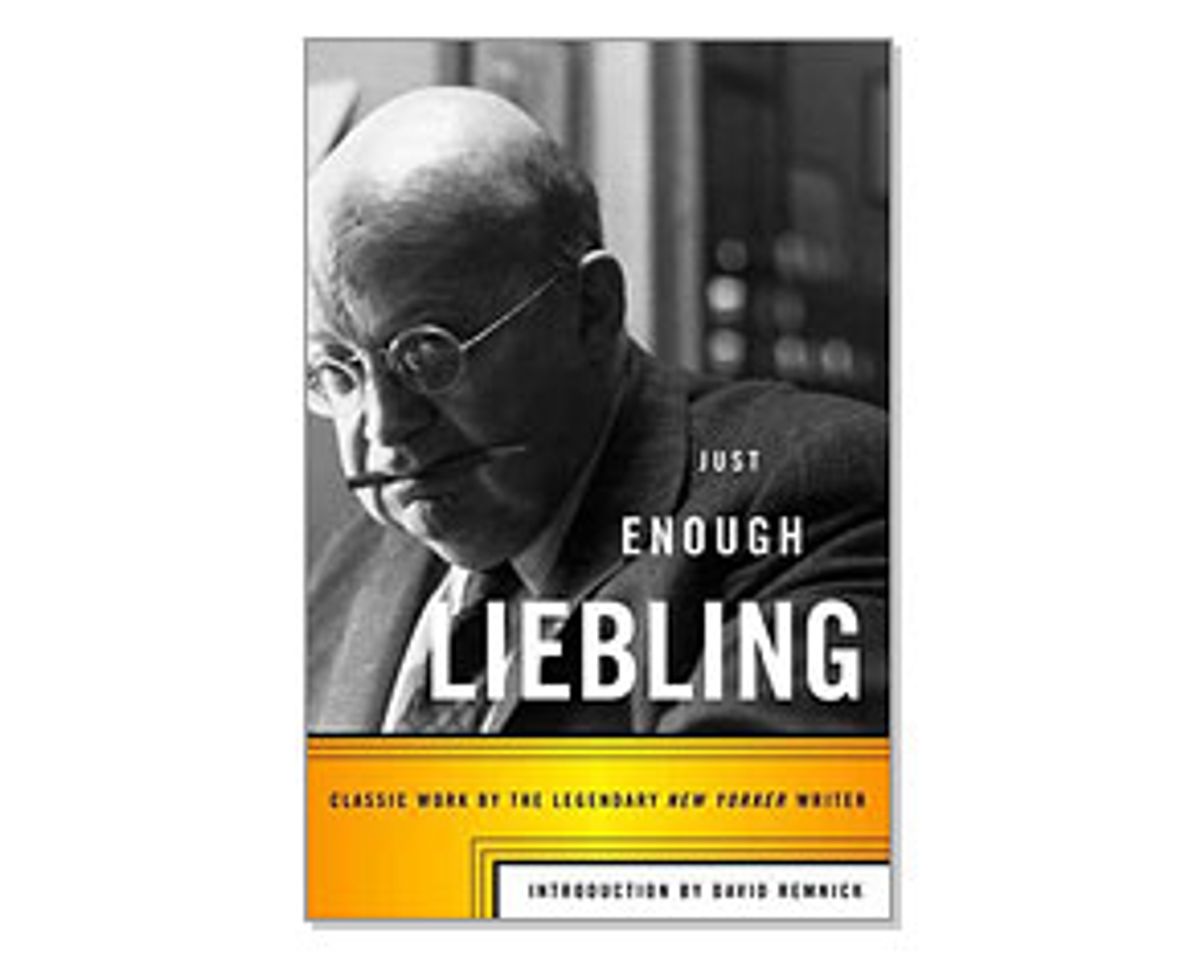 If, as Octavio Paz once said, literature is journalism that stays journalism, is it time to acknowledge that A.J. Liebling made literature?

The titles of Liebling's many classics -- "The Sweet Science," his collected boxing pieces from the New Yorker; "Chicago: The Second City"; "The Press," his collected press columns in the New Yorker; "The Earl of Louisiana," his fan's note to Louisiana Gov. Earl Long; his collected food writing pieces, "Between Meals"; his war correspondence, "Mollie and Other War Pieces" and "The Road Back to Paris"; and at least half a dozen others -- are all familiar to writers and journalists of my generation, the generation that came of age influenced by the writers Liebling influenced. Tom Wolfe, for instance, who famously and generously credited Liebling with kicking off what came to be known as "new journalism."

Unfortunately, you need a bigger audience than writers and journalists to stay in print, and Liebling, in all his reincarnations, has never truly found one. His audience at his peak in the mid- to late 1950s was fairly big for a journalist, but most of his readers had already read his stuff in the New Yorker by the time the collections were published between covers, with the result that most of Liebling's books were destined for secondhand bookstores -- which is where I and my friends found them -- even before they arrived in retail bookstores.

Happily, though, every decade or so somebody thinks to reprint a handful of his titles and kick off another Liebling revival. The latest includes "Chicago: The Second City," with the original New Yorker drawings by Saul Steinberg, and "Mollie and Other War Pieces," both from Bison Books (University of Nebraska Press), "The Telephone Booth Indian" from Broadway Books, and "Between Meals" and "The Sweet Science," both from North Point Press.

The book that will probably get more attention than any of these is "Just Enough Liebling: Classic Work by the Legendary New Yorker Writer," which describes itself as being "more like a capacious single work than an anthology," though the distinction between what North Point Press has done, taking long sections from books and grouping them under various subjects (food, boxing, war, press, etc.), and an anthology escapes me.

Capacious or anthology, "Just Enough Liebling" is a bit of a disappointment -- it's actually less Liebling than we were offered in the last Liebling comeback 20 years ago. Is the title meant to be ironic? If so, then why not take the volume's 536 pages and do what Playboy Press did back in 1982 and '83 in two volumes, "Liebling at Home" and "Liebling Abroad" -- simply reprint several of the unavailable books in their entirety? One I'd especially like to see is the nearly forgotten "Where I Came From," about growing up in pre-World War I New York. What reader would want as much Liebling as "Just Enough Liebling" offers and not want more? David Remnick's introduction, too, is a bit of a letdown -- high on the How I Discovered Liebling and How He Influenced Me side, short on the How Liebling Influenced Modern American Journalism side.

Then again, Liebling's influence gets harder to pin down with each passing decade, even as the journalists he influenced continue to evoke his name. Not only has the world, mostly the New York, he wrote about vanished, there hasn't been much of interest to replace it. Are there still fast-talking confidence men on Broadway with fake offices? Maybe, but who wants to read a book about cellphone Indians? Boxing is even more marginalized now than in the early 1950s, when Liebling or anyone else could conceivably show up at the arena an hour before fight time to see Archie Moore, Rocky Marciano or Sugar Ray Robinson. Today, even the sporting public doesn't notice boxing more than once or twice a year for so-called superfights. (You can't just show up at a Las Vegas casino to catch Oscar De La Hoya.) Press criticism today is either partisan or viewed as partisan by partisan readers, and more readers than ever are partisan.

If Liebling were alive today, what would he write about and for whom would he write it? It's tempting to say that cable TV news or NASCAR or Thai food might inspire him, but if so, who are the A.J. Lieblings writing about these things now? The truth is that Liebling really didn't leave any disciples, though that doesn't prevent press critics everywhere from making judgments in his name. (In August, Slate press critic Jack Shafer, in a tribute to Liebling, used the occasion to praise and damn several other press critics around the country. Precisely how Shafer knows which writers Liebling would approve and disapprove of was not explained.)

His methods, no matter how many people have claimed them as an influence, were too arbitrary, and his temperament too personal and idiosyncratic, to leave a pattern for greatness that others would follow. In truth, despite the frequent comparisons to his friend Joseph Mitchell, there really wasn't anyone much like Liebling back in the '40s and '50s. Liebling was always much better than those who claimed to be influenced by him, including Wolfe, who finally gave up chasing Liebling's ghost to pursue John O'Hara's -- not exactly a trade up. As Herbert Mitgang pointed out, reading Stendhal's "The Red and the Black" turned out to be better preparation for covering World War II than the apprenticeship served by some of his fellow war correspondents in the press boxes of professional football games.

If Liebling actually had a philosophy as a writer, it could probably be summed up in three brief tenets, which run through all his books. 1) Know your subject really well. 2) Don't ever force the humor; always look for it and you will find it. And 3) Spar with the little guys, but put on the eight-ounce gloves when taking on the big shots. The last one was his main point.

It was as a press critic that Liebling made his greatest impact and left his most important legacy -- his most quoted line is still "Freedom of the press belongs to the man who owns one." Which is why it's so disappointing to find just 50-odd pages given to his press writings in "Just Enough Liebling." It might have been a greater service to simply reprint "The Press."

There's a school of thought that contends that Liebling's best work was not his press criticism. This is not only wrong, but it misses the real significance of Liebling. Everything Liebling wrote is worth reading and rereading, but the modern viewpoint tends to gloss over the shortcomings of most of his books. I have no interest in food writing -- to me, reading about food is like semaphoring about sex, so I'll make examples of three other Liebling books.

Moreover, there was something about Liebling's boxing writing that, however enjoyable it might be, is never entirely satisfying. In 1982, while working for the Village Voice, I interviewed Norman Mailer prior to the Larry Holmes-Gerry Cooney fight, and we touched on the subject of Liebling. "He was wonderful on politicians and many other matters," said Mailer, "but when it came to fighters, he did have a New Yorker attitude that was fatal. A sort of, 'Oh, let's look at these quaint brutes' stance.'" Mailer was exaggerating, I think, but the point survives the exaggeration: Great fighters are thrilling, and Liebling's jaunty, informative prose never truly thrills.

It has often been lamented that Liebling died before he had a chance to write about Muhammad Ali. (He did cover an early Cassius Clay fight, before he became champ.) I'm not so sure this was a tragedy; as much as I enjoy "The Sweet Science," there's nothing in the book that makes me confident that Liebling would have known what to do with a subject larger than boxing itself.

Liebling's much celebrated "Chicago, the Second City" -- he didn't invent the term, but he popularized it -- is one of his most entertaining books, but it's also one of his shallowest and most mean-spirited, an unrelieved diatribe against Chicago, the main and in fact only criticism being that it isn't New York. The book has not dated well, if indeed some of the criticism was valid then. Liebling found so little to enjoy in Chicago, one wonders if his real subject wasn't his inability to find enjoyment anywhere that wasn't New York. God was merciful in taking him before he could see the decline in New York. "Plays at Chicago theatres," he writes, "are always locally assumed to be inferior versions of New York productions." This was before the Goodman and Steppenwolf began staging productions that, when they finally arrived in New York, were seen to be superior to anything New York theater had to offer.

As for "The Earl of Louisiana," that slice of forced folksiness about Huey Long's brother, Gov. Earl Long, the less said the better. No one reading it today would derive a real indication and understanding that the civil rights movement was about to explode in the Deep South in a very ugly way. You get the feeling that Liebling regarded Earl Long as just a corn-pone version of the gregarious, backslapping political bosses he grudgingly admired in New York. So little serious attention is given to the increasingly heated race relations in Louisiana that you get the impression you're reading an account of Southern politics written before World War II, rather than in 1960.

Liebling's press criticism, though, jumps off the page at you with more relevancy than most of this morning's accounts of the news. No one has matched his ability to combine anger and withering irony while avoiding cynicism. Liebling has sometimes been glibly dismissed as an ideological liberal. He was, or at least he was more a Franklin Roosevelt than a Teddy Roosevelt man. But what he really was was a liberal as defined by Webster's, meaning "tolerant of views differing from one's own," "unorthodox" and "favoring reform, specifically political reforms." In a word, he was progressive.

What press critics would be worth reading who were not liberal by such definitions? Liebling was particularly harsh on those who weren't, particularly the pompous Washington Post and, later, New York Journal-American columnist Westbrook Pegler, whom Liebling nailed as "a courageous defender of minorities -- for example, the people who pay large income taxes."

While some of the casts, crews and controversies of Liebling's famous press essays have changed, "The Press" remains gravid with contemporary appeal: "No newspaper, anywhere in the nation, has had a kind word for the working man since about 1936," he writes. "[O]n this point the press is not lopsided, but unilateral, monolithic, solidary, and unanimous." I don't know if "The Press" qualifies as literature, but it sure as hell is journalism that has stayed journalism.