This Hong Kong hit from 2002, starring Andy Lau and Tony Leung and just now being released here, is one of the truest American gangster films of all time. 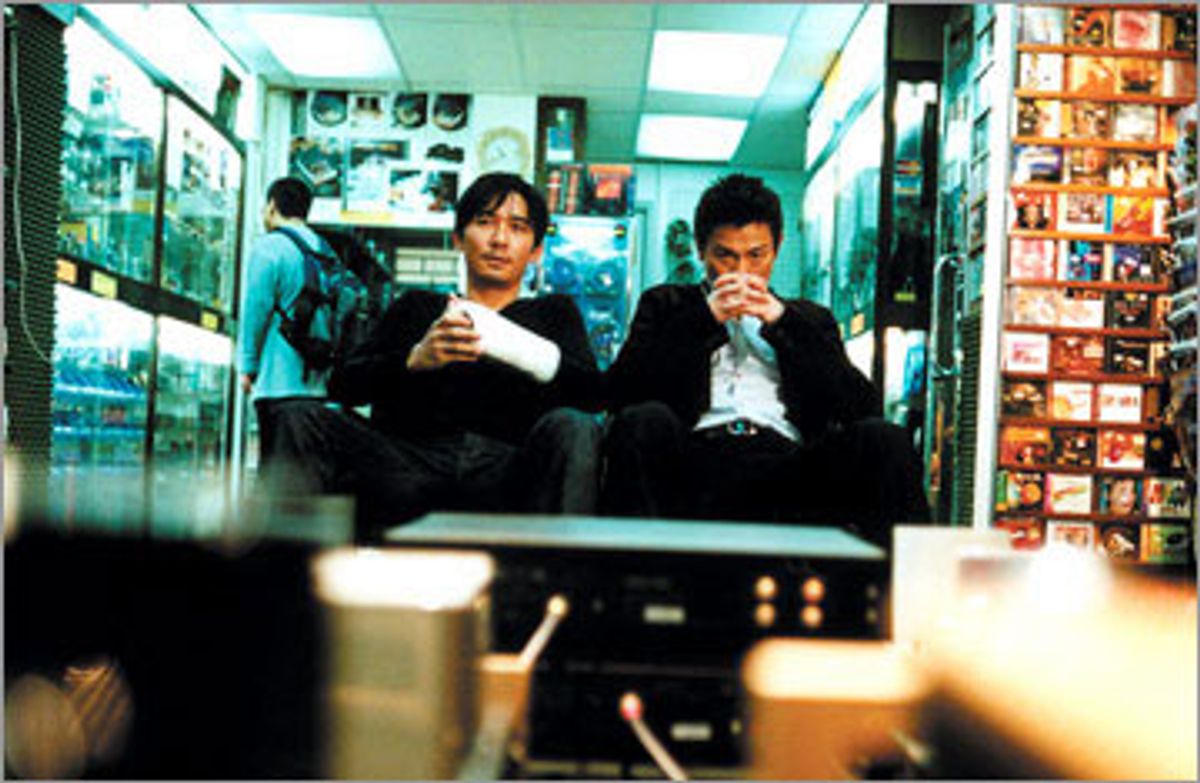 The Hong Kong hit "Infernal Affairs" -- a picture made in 2002 by Andrew Lau and Alan Mak that's just now reaching these shores -- is one of the truest American gangster films of all time. Although Hollywood churns out a a new cop thriller just about every other week, we've forgotten how to make true gangster films, a genre we consider quintessentially American to the point where we feel we no longer have to work at it.

No matter how many times filmmakers from other countries -- from Jean-Luc Godard to John Woo -- have grabbed the gangster film away from us and returned it to us, reinvented and reinvigorated, we continue to be lax in rising to the bait. There have been notable exceptions (within the last 11 years or so, "Carlito's Way" and "Donnie Brasco," to name two). But even though many of our cop thrillers feature gangsters of one sort or another (and even though they often make big money, worldwide), so many of these pictures clump together into a generically dull ball. It's gotten to the point where we need Hong Kong to remind America who it is.

"Infernal Affairs" just does that. Lau (Andy Lau) is a Hong Kong cop assigned to find a mole in his department: The traitor, whoever he is, has been feeding information to a powerful gangster outfit led by a beefy thug named Sam (Eric Tsang). Chan (Tony Leung) is an undercover cop who has been working with Sam's gang for years -- the only person who knows his true identity is his boss, Wong (Anthony Wong). The twist is that Lau is the mole (a plot detail that's revealed early in the picture, so no spoiler alert required).

The setup -- a good guy pretends to be a bad one, while a bad guy masquerades as good -- is classic, but what Andrew Lau and Mak do with it makes all the difference. "Infernal Affairs" takes many of its cues from American cop movies like Michael Mann's "Heat": The story is cut together from stylish shards that are distinctly Mannish, and even its daytime scenes have that desolate city-at-twilight feel, a vibe that Mann has been so adept at capturing. (The picture's cinematographers are Lai Yiu Fi and Andrew Lau. And to clear up any potential confusion: Andy Lau, the movie's star, is no relation to the movie's director. But the director and the cinematographer are indeed the same person.)

But while one of the great pleasures of watching "Infernal Affairs" lies in seeing how Andrew Lau and Mak use stylistic, compact dots and dashes to fill in the myriad details of the complicated story (smartly written by Felix Chong and Mak), the heart of the picture is the shadowy relationship, and contrast between, its two main characters, Chan and Lau. If you're already seeing visions of that blinking neon sign spelling out "Duality!" don't run away just yet. For my money, the concept of duality is the biggest yawn in movies. I suspect that, at least as far as it's been explored in the movies, the idea that two characters are very different on the surface yet -- get this! -- actually very similar deep down was invented by and for movie critics to show how smart they think they are.

There's no phony duality setup -- no brothers-under-the-skin crapola -- in "Infernal Affairs." Although both Chan and Lau are cops, they're distinct versions of very different things, and the movie never lets us forget it. Andy Lau's Detective Lau wears narrow, trimly tailored suits, and his gait is so elegantly studied that it actually appears relaxed. Lau, as a bad guy in cop's clothing, would wear impeccably tailored suits as part of his disguise.

But Andy Lau's performance is so tightly controlled that it fits into that suit with room to spare. His character is almost shockingly cool -- we never see him ruffled, at least until close to the movie's end. Andy Lau never does anything obvious to telegraph the turmoil shivering beneath the surface of his character. Yet somehow, we never have any doubt that it's there.

Lau has the face of a grave elf. In scene after scene and shot after shot, we see him taking in information, processing it, filing it in the appropriate mental slot so he'll know how to use it later. But even though Detective Lau is an almost placidly still character (in fact, "Infernal Affairs" has very few shootouts and relatively little graphic violence; it builds all the excitement it needs through simple suspense), he gives off the sense of being constantly on the run. There's something distressingly unsettled about him -- it's as if the whole performance were inspired by the fierce but barely perceptible beating of an insect's wings.

But as terrific as Andy Lau is, "Infernal Affairs" is Leung's movie. Audiences with even a cursory familiarity with Hong Kong movies -- from John Woo's "Hard Boiled" and "A Bullet in the Head" to Wong Kar-Wai's "Chungking Express" and In the Mood for Love" to Zhang Yimou's justifiably exalted "Hero" -- will probably recognize Leung's face. Leung has been one of my favorite Hong Kong actors for years, and his performance here is one of the finest I've ever seen him give. His Chan has been working undercover for some 10 years. When he meets with Wong, who seems to be his only friend, he transmits the weight of his burden without exactly spelling it out. He's exhausted and despairing not because he lives a dual life, but because he lives only one: No one but Wong and, later, the police psychiatrist he flirts with in a few duskily muted romantic scenes, knows he's a cop. Everyone who knows him, knows him as a gangster, and he barely knows himself anymore.

Leung explains all of that with a few lines, but he tells us even more with his carriage (there are hints of physical exhaustion beneath its raffishness) and with the nearly drained-dry glimmering darkness of his eyes. As with Lau, all of Chan's despair is internal. He shields it from the world, as if it were a fragile creature that needed to be protected -- and it does, because it's the only thing that makes him feel human.

Leung's finest moment comes when Chan runs into an old girlfriend on the street, a woman he hasn't seen in six years. She has a little girl with her, her daughter. The two make awkward, emotionally charged chitchat for a few minutes. Chan asks the woman how old her little girl is; she tells him she's 5. After Chan walks away, the little girl tugs on her mother's sleeve and reminds her emphatically that she's 6. In other words, she's Chan's child.

That's the kind of moment that we might laugh at if we saw it, hamfistedly executed, in an American movie. But the scene is played with such weightless tenderness that it works. Hong Kong action films are often marked by a certain kind of sentimentality that "sophisticated" American audiences often find corny. And even "Infernal Affairs" has a few moments where string music swells beyond what we may feel comfortable with. Yet that music suits the tenor of the scene in which it's used -- it's one of the most deeply emotional moments in the picture, and it's fitting that it should be enveloped in an operatic bubble.

Andrew Lau and Mak keep most of "Infernal Affairs" so dry and taut that when they succumb to deep emotion, it actually means something. Chan and Detective Lau don't meet face-to-face until late in the movie, which means that through most of the story, their relationship is simply implied. Even so, it's always the center of the film, the unbreakable knot around which the whole thing revolves.

The themes of honor and loyalty, those old workhorses that pull many of the great gangster movies (Asian and American ones alike), are present here, but Lau and Mak skate around them lightly. The truer theme of "Infernal Affairs" is that brotherhood often has finite limits; a state of isolation is in some ways preferable -- at least you always know whom you're dealing with.

"Infernal Affairs" works as both a piece of entertainment and a solid genre exercise. But like the best of its kind, there's enough going on beneath the surface to stay with you. (Its fans will be happy to know that two sequels, one of them actually a prequel, have already been made.) "Infernal Affairs" also inspires us to ask ourselves what, aside from the country of origin, makes a picture distinctly "Asian" or "American"? There's no simple way to answer that question, but the simple truth is that "Infernal Affairs" gives us the best of both worlds.