Lefties demanding their Che or the highway may be disappointed, but this portrayal of the mythic revolutionary resounds with minor epiphanies. 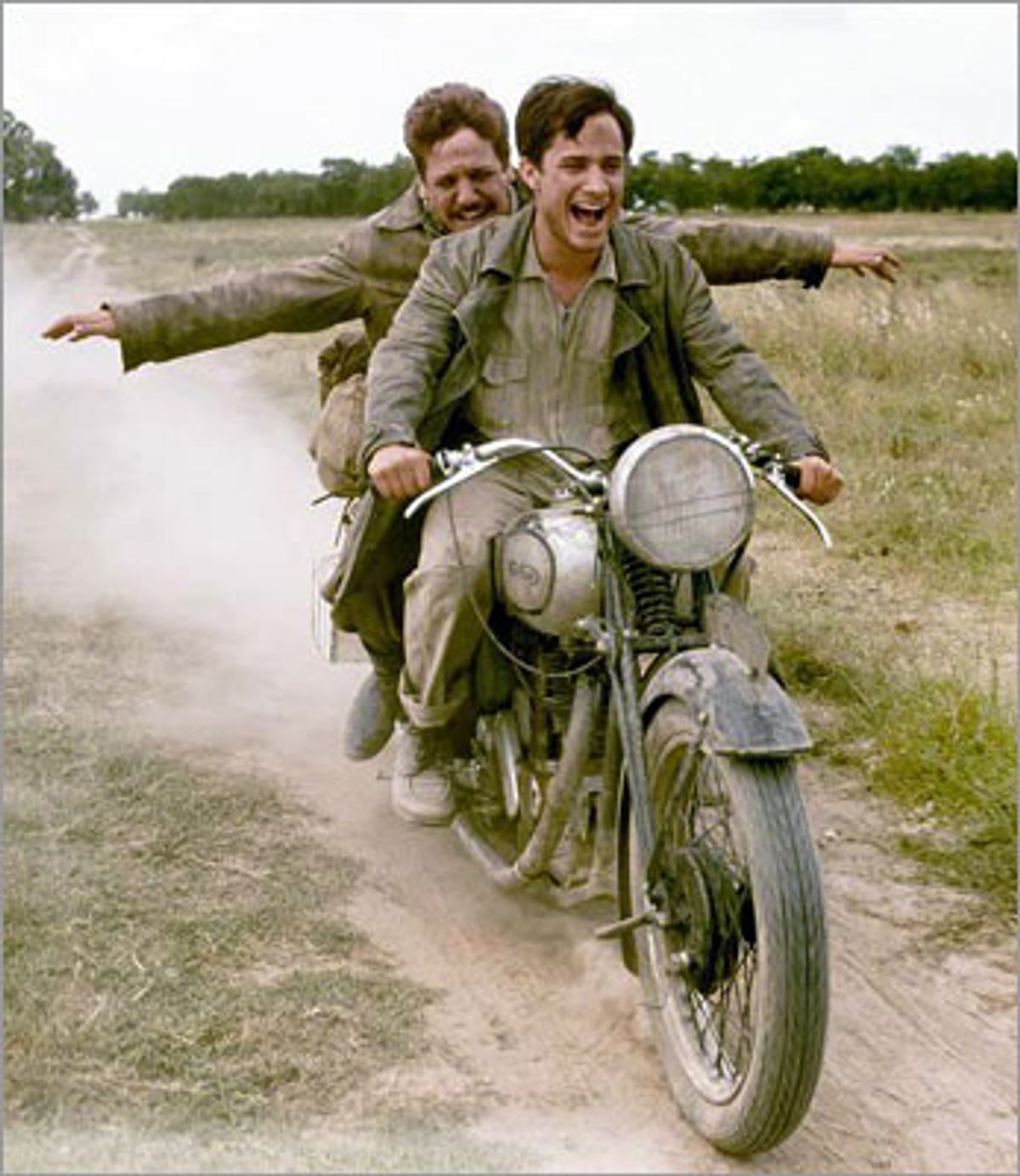 If the handsome young Mexican actor Gael García Bernal goes any further into playing shy, awkward, slightly damp characters as they discover the world, somebody in Hollywood is going to have to revive the "Revenge of the Nerds" franchise. The fact that the 23-year-old character he plays in Walter Salles' new film, "The Motorcycle Diaries," would become a person of enormous political and cultural significance is interesting enough. In the context of the film, though, it doesn't matter as much as perhaps it should.

"The Motorcycle Diaries" is a paradoxical affair. How could it not be? The man whose story it tries to tell is one of the most conflicted symbols of our age. I imagine that North Americans and Latin Americans will encounter quite different "texts" -- if you'll forgive the horrible jargon -- when they watch it. On the one hand, that's a tribute to Salles and screenwriter José Rivera's delicate handing of their subject. On the other, it's a testament to the chasm between our continent -- our world, one might better say -- and theirs, which half a century of capitalism and "development" have done surprisingly little to bridge.

This is a quiet, gently good-humored and tender road movie. If it reminds you of the film that showcased Bernal's breakthrough role, Alfonso Cuarón's "Y Tu Mamá También," it's mostly by way of contrast. That was also a story of two young men in the hinterlands of Latin America, where the personal met the political. But where that film seemed to burst with color and all but explode with sexuality, this one is more detached, a fair bit cooler and a lot sadder. Even in a small town in Chile where the local girls seem bored and willing, our hero -- whose face will later emblazon the T-shirts of a million American college students -- can't get laid.

From the perspective of Hollywood movies and American literature, "The Motorcycle Diaries" feels like a familiar story of Kerouac-style rebels on the open road. It's an exotic travelogue and a fable about growing up. Sure, these guys on their 1939 Norton 500 have ideals and dreams of a better world, but they seem to belong to the "Easy Rider" tradition of individualism, iconoclasm and almost metaphysical transformation. This is the story of Che Guevara -- for that's who we're talking about -- divorced from politics and history, rendered as a young American.

For viewers from any country between the Mexican border and Tierra del Fuego, regardless of their political affiliation, "The Motorcycle Diaries" is likely to possess a different significance. Ernesto Guevara de la Serna (Bernal), the naive, asthmatic Argentine medical student who sets out to travel 8,000 miles of South America in the summer of 1952, is both an individual and an emblem of an entire continent's painfully emerging self-consciousness, one still not at peace five decades later. This too is a portrait of Che Guevara as a young American -- but in the broader, hemispheric sense of that word, a meaning not at all divorced from politics or history.

I suspect some leftists will lament that "The Motorcycle Diaries" isn't political enough, while some less political filmgoers may find it too sober, a bit short on the supposedly intoxicating spirit of Latin American narrative. There is a balancing act at work here that sometimes makes the film seem too careful, but I found it a lovely and supremely moving experience, a haunting symphony in a minor key if not a knock-your-socks-off masterpiece. Salles (the Brazilian director who made "Central Station" and "Behind the Sun") and his crew follow the route taken by the young Guevara and his Sancho Panza-like companion, Alberto Granado (played with élan by the Falstaffian Argentine actor Rodrigo de la Serna), shooting the film in sequence and almost entirely on the actual locations visited by the duo 50 years earlier. This quasi-documentary approach -- most of the extras are local townspeople, and some of the dialogue is improvised -- lends an agreeable, unforced quality to the journey.

Voice-over narration is rarely desirable in a feature film, but it's hard to avoid when you're adapting a literary memoir. (Rivera's screenplay is based on both Guevara's famous book "Mi primer gran viaje" -- which really means "my first big voyage" but has always been known in English as "The Motorcycle Diaries" -- and on Granado's "Traveling With Che Guevara.") Bernal comes in and out as a narrator, sometimes to lend context and sometimes for comic effect. "I'm glad we have left civilization behind and are a little closer to the land," Guevara intones as the bike roars out of Buenos Aires into the Argentine countryside, just before spinning out and sending the riders, their gear and Guevara's little dog into a roadside ditch filled with muddy water. (Everybody's OK.)

From the gargantuan manor house belonging to the Anglophile family of Guevara's beautiful but self-absorbed girlfriend Chichina (Mía Maestra) to windswept Andean villages, the colonial port city of Valparaíso, the emptiness of the Atacama Desert and the glorious Inca ruins of Machu Picchu, Guevara and Granado -- but not their beloved Norton, alas! -- travel downward in class, and in some sense backward through history, across South America. The scenery is amazing, but if this film occasionally looks like a National Geographic special, it's one that comes with an uneasy conscience.

Salles and Rivera never get out the message hammer to whack you with it, and in fact there is very little overt discussion of politics in this film, and none at all of Marxism or revolution. But when Guevara meets a couple of peasants who have been forced off their land and into dangerous jobs for the notorious Anaconda Mining Co., or notices that the Indians on the Amazon must travel on a dingy, overcrowded scow towed behind the ferryboat where light-skinned passengers like him ride, the point is made clear.

"The Motorcycle Diaries" is a movie of little epiphanies, not grand ones. When they arrive they do so mostly in the travelers' down time, at the dances Guevara and Granado attend in village halls wherever they wind up. In rural Chile, a misunderstanding with a horny married woman leads to our two travelers desperately fleeing a vicious mob, eager to kill the hated Argentines. But by the time they reach the end of their voyage together, at a leper colony deep in the Peruvian Amazon where they work as volunteers for three weeks, the local dance becomes a delightful communal celebration. (Even if Guevara still can't dance the tango, the mambo or anything else.)

Is there a big, unanswered question hanging over this movie -- the enigma of a charismatic young writer and thinker who picked up a gun, a man who came to stand for liberation, for populist uprising against imperialism, but who is also implicated in the rise of Fidel Castro's sclerotic regime? Sure there is, and Salles' film makes no attempt to resolve it. Che is back as a campus T-shirt icon -- if indeed he ever went away -- not because of a rise in doctrinaire leftist thinking (although that may be happening too) but because he's the rock star of revolution, an ever young symbol of the possibility of human transformation. Whether you want to see "The Motorcycle Diaries" as entirely a personal story or as social and political allegory, it captures a far different and far more vulnerable Ernesto Guevara than the one we think we know. In this story he is not trying to transform society but himself. There is no messianic grandiosity to his quest; his travels help him draw a little closer to the human race around him, which has always seemed, he confesses, "extraña para mi." Strange to me. Yeah, to me too. Probably to everybody.