"The Plot Against America" by Philip Roth

In his most believable novel in years, Philip Roth imagines a 1940s America where Charles Lindbergh unseats FDR and the nation descends into vicious anti-Semitism. 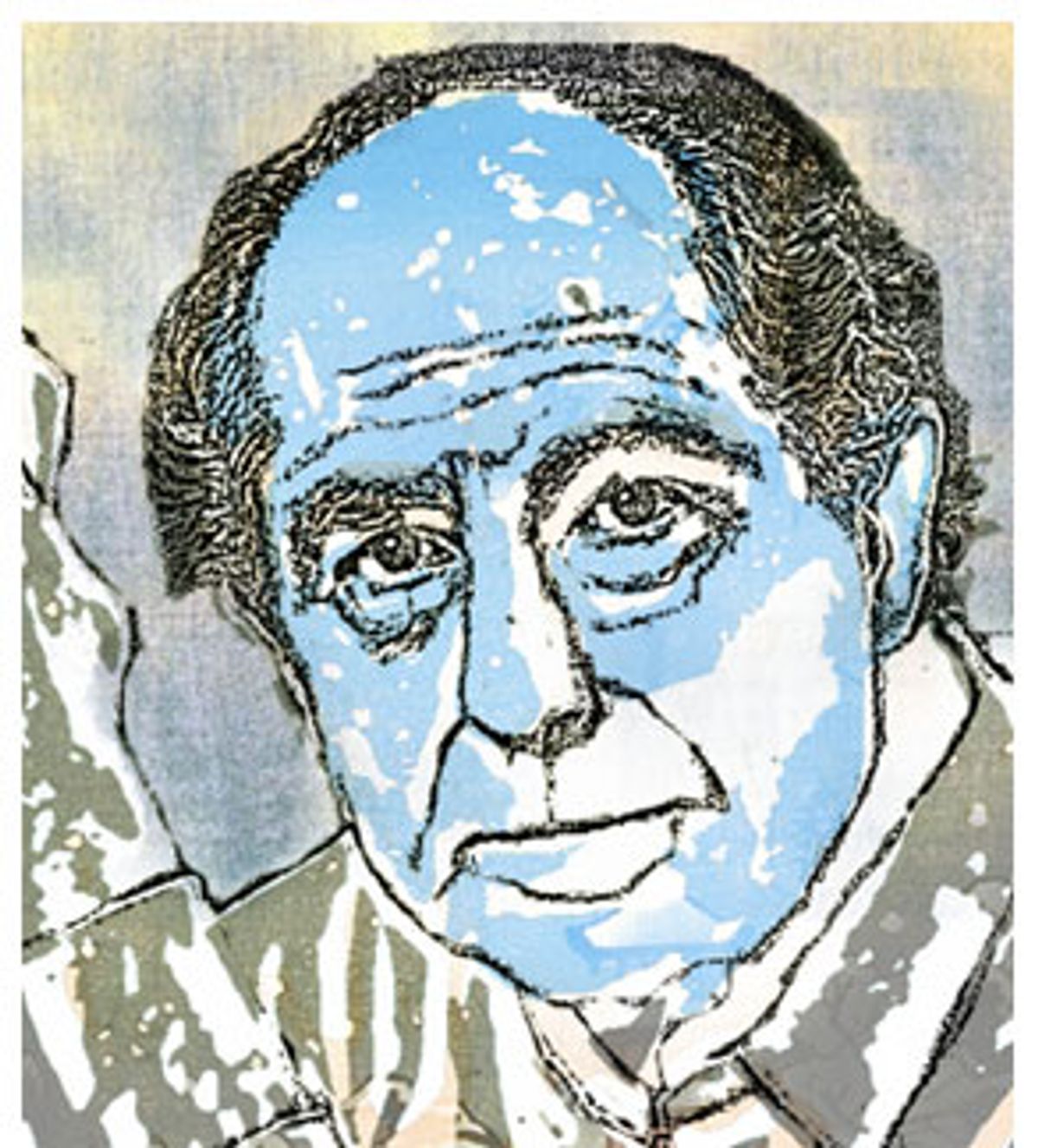 When, in 2002, Philip Roth won the National Book Foundation's medal for Distinguished Contribution to American Letters, the most august lifetime achievement award he's likely to receive unless he's called to Stockholm for a Nobel Prize, he devoted his acceptance speech to a long and cranky argument about his right to consider himself an American writer rather than a Jewish writer. This is Roth's oldest gripe -- that as an artist and a man he's been subjected to unfair claims on his loyalty and identity. And while it may seem regressive for a writer of Roth's renown to be swatting away such ancient reproaches (does anybody still make them?), his ability to keep old grievances alive is what fuels him.

Roth's feelings of persecution have been the engine of much of his fiction, and for his readers it's always a complicated balancing act: Is the thrill of being swept up in his stormy wrath worth the suspension of common sense that's often required? The tirade about the Monica Lewinsky scandal that kicks off "The Human Stain," for example, has a certain Swiftian magnificence, but as a description of what happened in America in 1998 it is dead wrong. The nation was not caught up in a puritanical witch hunt; rather, Americans largely refused to be whipped into such a frenzy, in defiance of the best efforts of right-wingers and certain media figures. (Wallowing in a gleefully smutty gossip-fest about Bill and Hillary Clinton's private lives is another matter -- that's still going on, to judge from the covers of supermarket tabloids.)

Sexual persecution is the specter that really winds Roth's watch, but in an era of gay marriage and openly polyamorous households, it's hard to find a situation in which a heterosexual male of conventional proclivities can feel truly ostracized as a result of his sexuality. As a result, Roth has had to contrive some pretty preposterous scenarios, populated by an assortment of straw-man oppressors, in order to maneuver his main characters into a position in which they can be unjustly tormented. You can see all the strings and gears here, as in "The Human Stain," in which Coleman Silk is given a wife solely so that she can be hounded unto death by a university's administration and thus provide sufficient justification for Silk's foaming hatred of that administration.

With "The Plot Against America," we're asked to believe something far more dramatic: that our country could, under the right circumstances and under the influence of powerful demagogues, degenerate into hate-stoked rioting on the level of Nazi Germany's notorious Kristallnacht. Yet -- a dismal thought -- this is more plausible than the propositions Roth has been presenting us with lately. Roth's handling of the story is sober, considered and subdued, another surprise. Roth's fire-and-brimstone eloquence has hypnotized many a reader who might, in a less persuasive fictional climate, reject the paranoid fantasies he concocts. Here, where the threat is real (however speculative the "history" may be), he has abandoned his fury.

For "The Plot Against America" is a book about fear. "Fear" is the very first word in it, and for Roth fear is the natural companion of love, the secondary subject of the novel. The book is a tribute to his parents, Herman and Bess, and the tender order and fierce integrity of the life they created for their two sons, Sandy and Philip, in mid-20th century Newark. Roth seems unaware of the vast and lively fictional genre of alternate history, but this novel belongs to the small subset of it that is less interested in the unfolding of global events than in the way those events affect the most intimate experiences of the people who live through them.

From the moment Lindbergh offers himself as a Republican candidate opposed to intervention in the war in Europe, he becomes the villain of the Roth household. This puts Herman at odds with such rich, assimilated Jews as Rabbi Bengelsdorf, a Newark macher renowned for his public speaking, horsemanship and "several books of inspirational poetry routinely given as gifts to bar mitzvah boys and newlyweds." Bengelsdorf is a marvelous creation, part object lesson in the perils of collaboration and part meticulous parody of self-important men everywhere: "'Newark has the best drinking water in the world,' the rabbi said, and said it as he would say everything, with deep consideration."

But while the desperate rabbis of Europe might have cooperated with the Nazis in hope of somehow lessening or managing the devastation awaiting their communities, Bengelsdorf is merely a fool. Like everyone else in the novel, he's in thrall to a notion of America; the novel's most ferocious battles ultimately boil down to a collision of contradictory Americas. For the rabbi and his "wealthy, urbane, self-assured" friends, America is their own success story, in which they, the tiny first generation of Jews to attend Ivy League colleges, "mingled with the non-Jews, whom they subsequently associated with in communal, political and business endeavors and who sometimes appeared to accept them as equals."

To the Roths, America is the set of constitutional and governmental protections that allows them to live unmolested in Jewish neighborhoods. What they share with their neighbors is not a particularly Jewish culture but simply a blessed relief from the prejudice that, anywhere else, made them feel like outsiders. "It was work that identified and distinguished our neighbors for me far more than religion," Roth writes -- and there is a powerful sense that the neighborhood and family depictions here are largely autobiographical. "Nobody in the neighborhood had a beard or dressed in the antiquated Old World style or wore a skullcap either outside or in the houses."

Philip and his family know they are Jews, and that this threatens to set them apart (early in the novel, Herman rejects a promotion that would require moving to a gentile neighborhood), but they identify as Americans. Philip, "steeped in an American English that sounded more like the language spoken in Altoona or Binghamton than like the dialects famously spoken across the Hudson," revels in the Fourth of July and Thanksgiving, and finds the bearded stranger who goes door-to-door collecting donations to establish a Jewish homeland in Palestine bewildering. "We'd already had a homeland for three generations ... Our homeland was America."

Lindbergh's presidency splits the Roth family. Bess' sister, Evelyn, marries Rabbi Bengelsdorf, who is appointed by Lindbergh to direct the Office of American Absorption. They lure Philip's older brother, Sandy, into an OAA program with the sinisterly wholesome title of Just Folks. Just Folks sends urban children to heartland farms for the summer, with the ostensible aim of "encouraging America's religious and national minorities to become further incorporated into the larger society." Sandy becomes a partisan of Evelyn's view that "the greatest fear of a Jew like her brother-in-law was that his children might escape winding up as narrow-minded and frightened as he was."

Sandy and the Bengelsdorfs are woefully mistaken about the ultimate ends of the OAA, but until its true nature emerges, they espouse many of the same ideas Roth himself has voiced. You could see "The Plot Against America" as an act of contrition, a concession allowing that the fears of his parents' generation represented, if not a present reality, then at least a potential one. In other words, it can happen here. The Jews of Newark are always merely a step away from panic, dogged by "an atavistic sense of being undefended that had more to do with Kishinev and the pogroms of 1903 than with New Jersey 37 years later." Previously, like Sandy, Roth called this paranoia. But in this novel, Newark's Jews are not so terribly off the mark.

The young Philip Roth in "The Plot Against America" is a child who has soaked up the ambient fear around him and attached it to everything from the cellar (haunted, he thinks) to the cousin who returns from fighting with the Canadian army against Hitler minus a leg. He cherishes his stamp collection, which somehow comes to stand for all the American ideals he and his family are about to see shattered. (Later on, his mother will urge his father not to send a letter to the gossip columnist Walter Winchell, who has become the most outspoken opponent of the Lindbergh administration, because someone might intercept it. "Never. Not the U.S. Mail," Herman replies.) Philip has a recurring nightmare that his series of stamps showing national parks have been overprinted with swastikas, and that the presidents' faces have been replaced with Hitler's.

Much of "The Plot Against America" consists of the child Philip's relatively ordinary boyhood experiences -- adventures with a mischievous friend, efforts to decipher the mysteries of the adult world, the slow revelation that his parents are mere human beings, and the trials of having to play with a geeky family friend, a boy to whom Philip will ultimately do a terrible wrong. The voice is an adult's, but not intrusively so. And meanwhile, underneath it all, the hum of menace grows louder and louder, until the disaster stalking Philip's America becomes indistinguishable from the routine disasters of growing up, and then suddenly eclipses them.

The novel's hero is Herman Roth, an insurance salesman who lacks the killer instincts of his entrepreneurial brothers. This leaves him more vulnerable to the anti-Semitic machinations of the government, and sometimes the book feels like a defense of him to a younger version of Roth who mistakenly saw Herman as weak. The uncles and other Jewish businessmen in "The Plot Against America" crackle and leap from the page -- the passages about them have the immediate feel of stories traded across the dining room table, full of rants and jokes and gestures, full of life. By contrast, the modest, industrious Herman might seem bland.

The nightmare of the Lindbergh presidency becomes, for Roth the novelist, a way of applying a brutal pressure to his father and mother, an experiment that reveals, in extremis, their true worth. At the moment of greatest crisis, each of them is called upon to act, and each shows the clarity of genuine courage, mobilized by their most deeply held ideals. "There were two kinds of strong men," Roth writes, "those like Uncle Monty and Abe Steinham, remorseless about their making money, and those like my father, ruthlessly obedient to their idea of fair play."

But while "The Plot Against America" concedes (after a fashion; the book has a rather gratuitous "secret" revealed at the end) that the rise of a murderously anti-Semitic regime is possible, even in the U.S., it is not his Jewishness that spurs Herman Roth's defiance of that regime, but his Americanness. Roth has not strayed so far from his old ways after all. To be Jews, for Herman and his friends, is "neither a mishap or a misfortune or an achievement to be 'proud' of." It is rather "in the nature of things, as fundamental as having arteries and veins, and they never manifested the slightest desire to change it or deny it." To insist on a place in this country no matter what the "nature of things" might be, this, for Herman Roth, and eventually for his son Philip, is to be American.