Does George Bush even know what science is?

A new political advocacy organization, Scientists and Engineers for Change, is pretty sure the answer is no. And so they're going on the warpath. 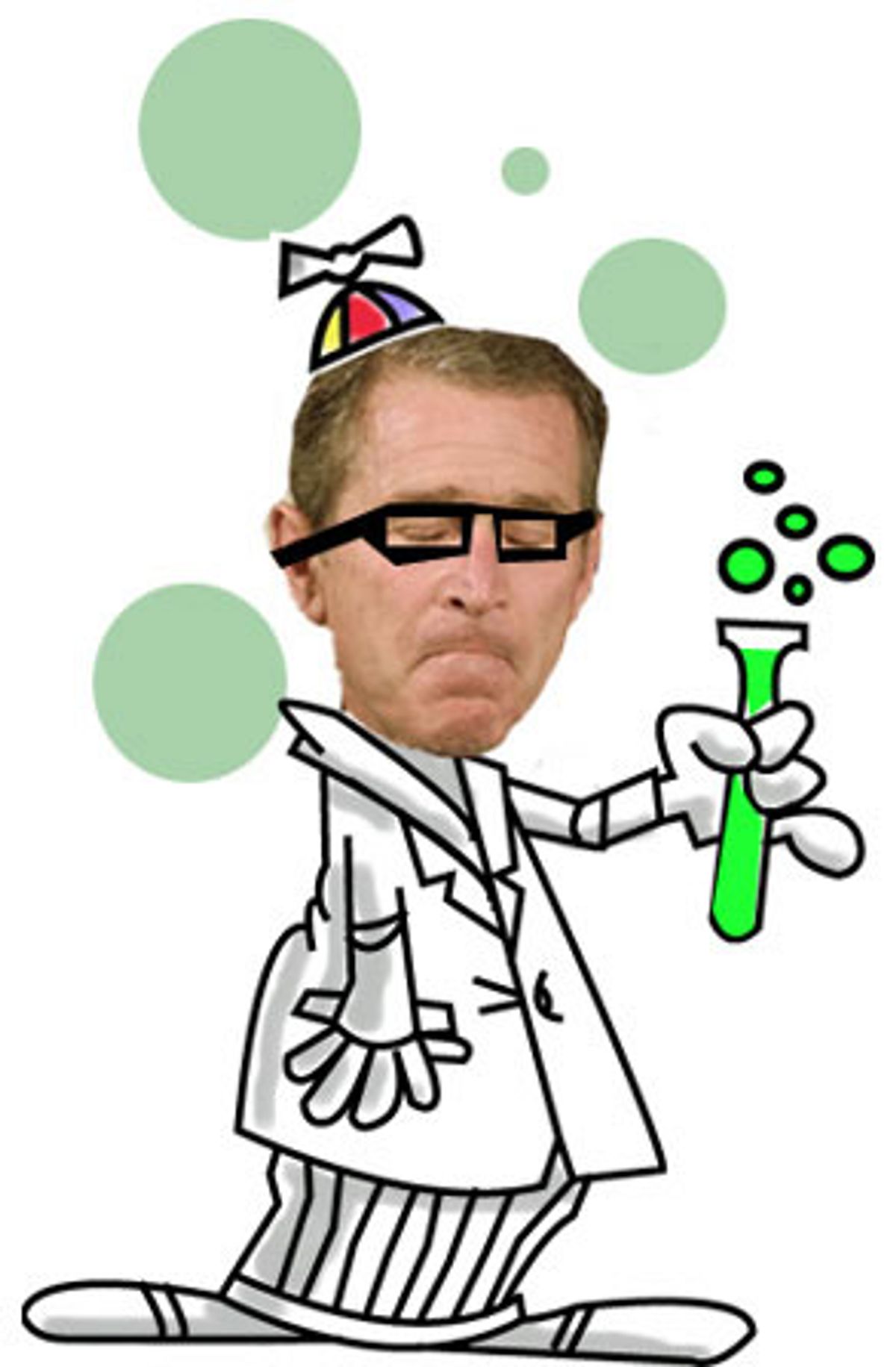 The Bush administration is dead set on encouraging American citizens to believe that having an abortion can lead to breast cancer, that abstinence is the only way to prevent sexually transmitted diseases, and that the verdict is still out on global warming.

These are just a few of the notions that the Bush administration has promoted by stripping out facts that disprove those theories from documents produced by such federally funded agencies as the National Cancer Institute, the U.S. Agency for International Development, the Centers for Disease Control and Prevention, and the Environmental Protection Agency.

If this kind of ideological takeover of public policy makes you see red, imagine how the nation's scientists feel. Bush hasn't just figuratively kicked them out of the Oval Office, he's literally done it: demoting his own top science advisor and moving the Office of Science and Technology right out of the White House.

Politicians have always been choosy about what they want to believe, for purposes of playing to their constituencies, but this administration has set a new standard, says Margaret A. Hamburg, M.D. Having worked under both Democratic and Republican administrations, Hamburg has served in the U.S. Department of Health and Human Services and was the commissioner of health for the city of New York.

"We've seen the intrusion of ideology much more forcefully into policies and programs," she says. "In biomedical research, healthcare services, public health, but also across a range of other domains -- environment, agriculture, education, missile defense -- you can see this intrusion of political philosophy into the evaluation and application of science."

For four years, scientists in the United States have become increasingly outraged. Now with just weeks to go before the election, one group is fighting back, launching a political advocacy and fund-raising organization called Scientists and Engineers for Change.

On Tuesday, the organization marked its creation by kicking off a speaking tour at the University of Oregon in Eugene headlined by Douglas Osheroff, a Stanford physics professor who won the 1996 Nobel Prize in physics. Osheroff was also one of the first recipients of the prestigious MacArthur "genius" award and is among the 48 Nobel laureates who've endorsed Kerry.

Osheroff, whose usually devotes himself to the study of quantum fluids and solids, told Salon why he felt compelled to go out on the stump to speak out against Bush.

How has the Bush administration demonstrated its disregard for science?

When it comes to energy policy we have an administration that has very sharp conflicts of interest. It's not just that these guys have made most of their money in the oil business, but it's that they have so many friends in the oil business.

What they've done is really tend to distort scientific evidence by picking and choosing those things that they like, that support the idea that we should continue to burn fossil fuels and let future generations worry about global warming.

There's been a pretty serious downgrading of the input that the administration gets from scientists ... You get the impression that George Bush doesn't understand what science is. You can't pick and choose. The administration commissioned the National Academy of Sciences to do a study of global-warming greenhouse gases. And they said among other things that there is very clear evidence that human beings are generating part of that problem: CO2. The other thing they said was: Look, the models are simply not good enough for us to predict what is going to happen. The administration ignores the first statement, and they seize on the second.

Government employees who are working on energy issues -- not just energy, but health issues, too -- are basically being silenced. They're not allowed to speak. Members of the National Institutes of Health are not allowed to visit the World Health Organization without permission weeks in advance. This is amazing.

How do you feel that energy policy would be different if they were listening to their scientists?

First of all, when George Bush became president he decided very quickly to deep-six the Kyoto accord by not supporting our participation in that. This was basically the first effort to constrain our emissions of CO2 worldwide, and I'm fairly certain the reason he didn't support it is that the accords put fewer controls on developing countries, particularly China.

If we had a different president who felt very strongly that we weren't on a level playing field he might have gone back and said, Let's negotiate this thing. But George Bush has provided no leadership in this at all.

Tony Blair recently said that global warming is the world's greatest environmental challenge. It's interesting that it has somehow not become a political issue in this election.

Certainly, Kerry does have an energy policy statement, and you can go read it on his Web site. I can tell you that after giving these talks yesterday that I would say that I swayed rather few voters, which is to say that few people are putting that near the top of their priorities. My guess is at this point global warming is probably not at the top of anyone's agenda. I, personally, am more concerned about what is going on in the Middle East right now. But that's a short-term thing, and I think we have to start planning for the future. The real problem is not with the developed countries.

I think through what ought to be a relatively easy focus on conservation and increased efficiency -- for instance, of automobiles -- we would be able to probably stay at the current level of production of greenhouse gas.

But you've got developing countries like India and China and Indonesia, and they're going to start doing two things: one is competing with the U.S. for oil. And we don't have the oil in the United States, despite what Bush says. Drilling for oil in Alaska will definitely provide a little bit of additional oil, but it's not going to solve the problem at all. And they're going to start emitting huge amounts of greenhouse gases -- CO2.

I think that is bound to happen. Right now, if you look at the CO2 levels in the atmosphere based on the ice-core samples both in Greenland and Antarctica, the highest level, typically, was not more than 300 parts per million.

We are now 375 parts per million. We are above what was geologically a historically high number.

The other thing is, petroleum is pretty limited. We can see the end of petroleum, particularly if you make what are plausible assumptions about the demand that's going to come out of India and China. I think that we need to be thinking right now about how to replace petroleum.

If you were going to ask a question of the presidential candidates in the debate Thursday night, what would the question be?

If I was going to ask a question about energy, I would simply say, What during your administration will you do to cut the emission of greenhouse gases?

In what other areas has this administration harmed science?

Certainly, stem cell research. What an opportunity we have! The idea that this undifferentiated cluster of cells is a human being is nonsense.

Here, Bush is basically caving into the religious right. You can ask the question: Can these undifferentiated cells think or respond, except chemically, to the environment around them? It's clearly not a human being. And I think that we're not talking about cloning human beings. I'm certainly against that.

Getting back to energy, isn't there an economic argument for it producing renewable energy?

A reasonable fraction of our balance-of-payments deficit is because of our importing foreign oil. I think that 60 percent of the oil that we use in this country is imported. Now, it's not all being imported at $50 a barrel, because there tend to be these long-term contracts. But this could go on for a long time, and frankly, I don't think that anyone sees an exit from Iraq. Cheney is talking about we need to be there for 10 years. Well, by that time, God knows what the cost of petroleum is going to be.

But getting back to the conflict-of-interest issue, Cheney and his friends make money when there is instability in the oil market.

That is the ultimate conflict of interest.

In any court of law, even at a university, this conflict of interest, the parties involved would simply have to recuse themselves from the decision-making process.

But quite the contrary happened. Dick Cheney was the one who formed our energy policy with input from people whose names we can't even get.

This is amazing because this is not a national security issue. Why on earth the American public is not allowed to know who contributed to our energy policy is absolutely beyond me. I find it amazing that the press hasn't made a big thing about this.