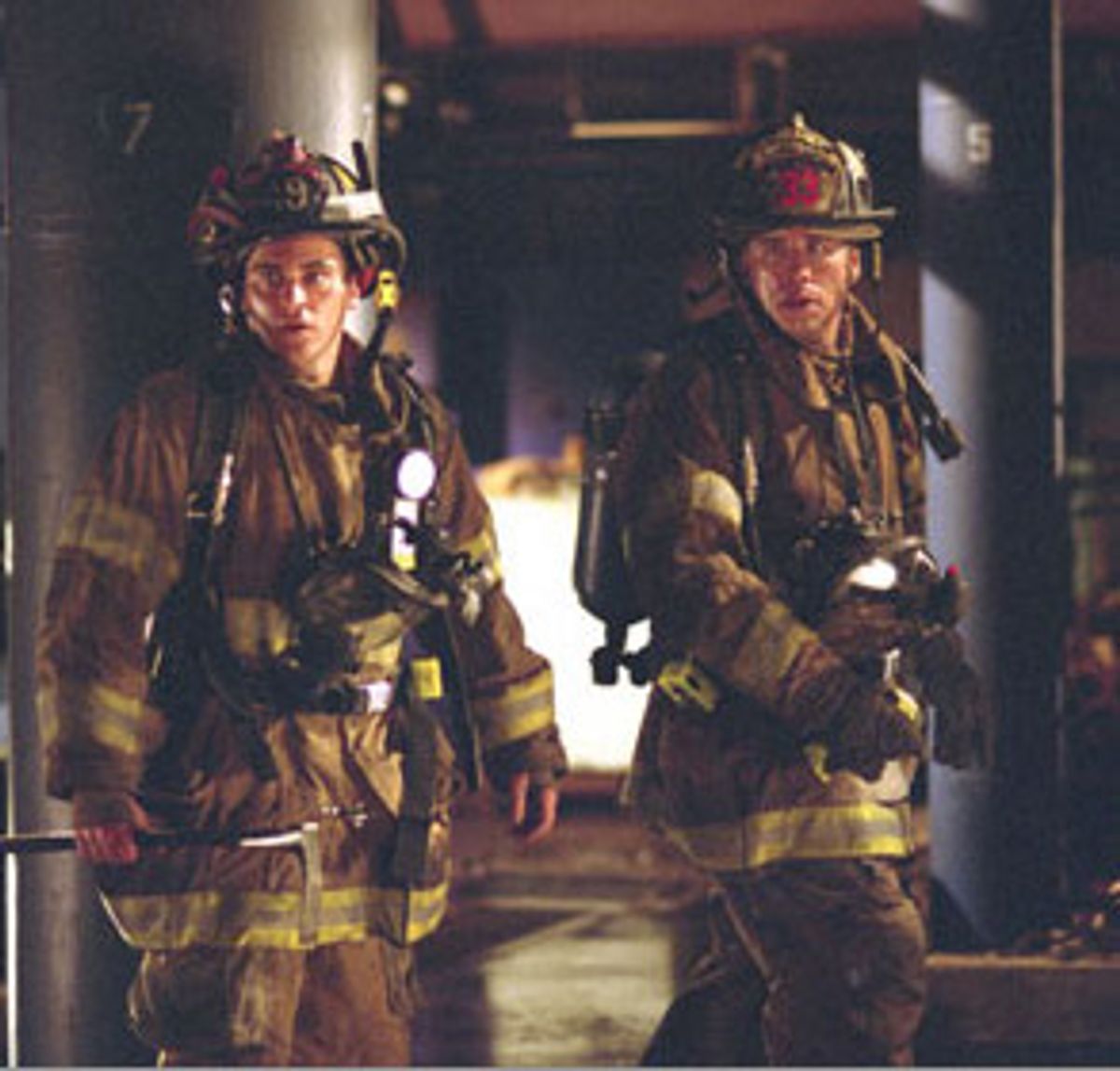 When you make a movie like "Ladder 49," about the day-to-day lives of firemen, almost anything you do runs the risk of being exploitative. It's hard to know the right way -- or even if there is a right way -- to show firemen cringing and crumpling as flaming beams crash down around them, or screaming in pain as their skin is seared by a burst of steam.

Jay Russell's "Ladder 49" does feel inexcusably exploitative in places. Other times, it's just predictably pedestrian -- in the way William Ross' score gets really, really big when the guys are putting out a massive fire, or the way whimsical, Irish-y pipe music plays when they're having fun.

But "Ladder 49" is impossible to dismiss for one big reason: Joaquin Phoenix plays Jack Morrison, a firefighter who, when the movie opens, has been on the job for years. After rescuing a panicky citizen from a high floor of a burning building, he's injured when a portion of the building collapses. He lies there, injured, unsure of his location in the building, which means that although his radio still works, he can't tell his colleagues how to find him.

As he waits, the movie flashes back on his career, beginning with his first day on the job and the practical jokes his captain (John Travolta) and fellow firefighters play on him. (At one point, they stuff a live goose in his locker.) His first fire; his first date with Linda (Jacinda Barrett, in a quiet, nicely controlled performance), the woman who will become his wife; his wedding and the birth of his children; the death of his best friend, search-and-rescue vet Dennis (Billy Burke), on the job: Jack's life unfolds before us even as we wait, nervously, to find out if he's finally reached the end of it.

Phoenix is astonishing here. He never resorts to actorly heroics as he forges through a slim doorway wreathed in flames, or, suspended by a set of cables and pulleys, dangles against the side of a building, clutching the waist of the terrified person whose life he's trying to save. This isn't Tom Cruise we're watching here, stoically and mechanically grinding his way through exceedingly dangerous tasks. Instead, Phoenix plays fear as an intuitive kind of intelligence: If you want to stay alive (and, just as important, save the lives of others), you also need to stay attuned to what you're up against.

When Phoenix sees a wall of flames spring up before him, we see a flicker of fear in his eyes: That small revelation is fleeting, but it's also devastating. Phoenix plays vulnerability as the root of heroism -- a suggestion that the very thing that makes us most human may be the main source of our strength. This is a delicate, passionate performance, shaded with subtle gradations of color.

In his first conversation with Linda, he learns she works in a store, where she helps people make their own jewelry. "So," he asks haltingly, knowing he's out of his element but desperate to plunge in anyway, "what's that called? Are you, like, an artist?" It's a wonderfully realistic line, and Phoenix plays the moment so we understand its subtext perfectly: A beautiful woman can be almost as terrifying as a burning building.

Phoenix never missteps, even when the script and the story let him (and his fellow actors) down. In one scene, he hesitates before entering the room of a wounded colleague (played by Morris Chestnut). The skin on the man's face has been seriously burned; he'll survive, but his face (which Russell films carefully, in shadowy light) won't be the same. Jack peers through the door of his friend's room, where a nurse is changing his dressings. He decides he can't go in -- what will he say? Another nurse takes charge of his doubts and fears (as great nurses often do): "Aren't you going to go in and see him?" Jack composes himself and faces his buddy, forcing himself to make casual conversation that, as if by sheer force of will, really does seem to become casual.

The scene begins to disintegrate when Chestnut's character breaks down: Understandably, he doesn't want his kids to see him this way. But when he has to deliver the clunker of a line "I was their hero," he's forced to reduce this character's complex, masculine fragility in the face of his injury to a screenwriter's cliché.

Still, Chestnut and Phoenix carry the scene beautifully. "Ladder 49" is less interesting for its noisy, aggressively dramatic firefighting scenes than it is for the way it suggests the texture of a firefighter's daily routine. We see the guys hanging around the firehouse, flipping through magazines or playing Ping-Pong, or out doing the grocery shopping, dressed in those big pants and boots, their suspenders drooping around their knees. Somehow, the sheer ordinariness of that aspect of their jobs makes the risks they take seem that much more affecting.

By its end, "Ladder 49" may make you feel as if you've been milked dry; it puts the squeeze on our emotions, and not always in a way that seems honest and clean. But Russell's instincts aren't always wrongheaded, particularly in the latitude he gives Phoenix. "Ladder 49" might have been an oversized Hollywood dazzler. Phoenix keeps it firmly and modestly on a human scale. He forges his way through fire, but never with the intent of impressing us. He's just doing his job.