"I love you, Security Mom"

A U.S. diplomat who quit his job over Iraq urges mothers to resist the Bush administration's fear-mongering. 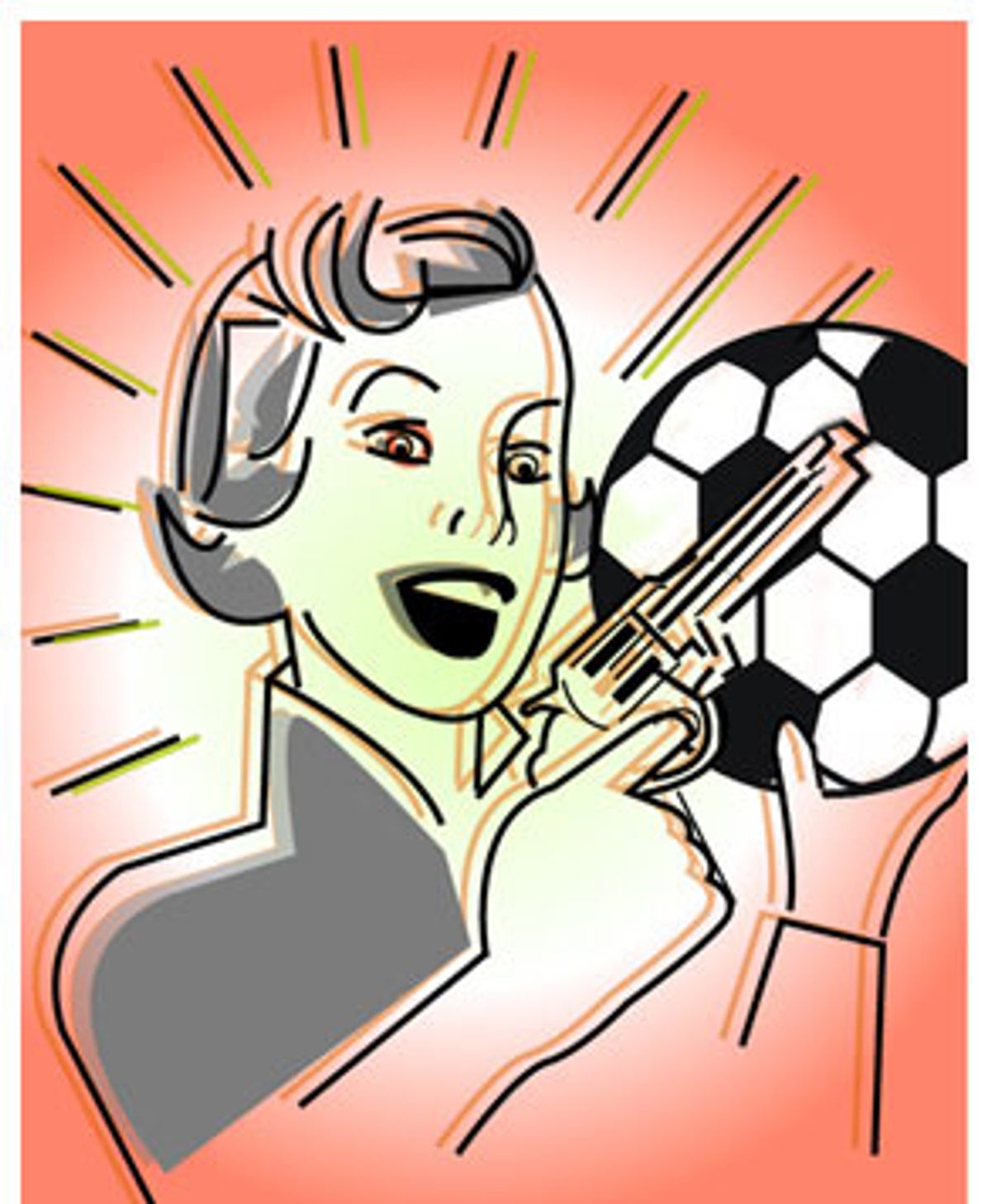 I just returned from traveling overseas to read that I am supposed to call you "Security Mom" now. Is this true? Newspaper columnists said the world had become so dangerous that you were buying yourself a handgun and would vote for the presidential candidate who said he was strong enough to kill terrorists. Is there any way I can talk you out of this?

I love you, Security Mom. In doing what you did to keep a home and a family together you kept America together. Every time I came back from a diplomatic posting, from Athens or Casablanca or Tel Aviv or Yerevan, you reminded me why I was so proud to be representing America to the world. America's suburbs and small towns were a fantastic place to live, thanks to the community you built. Each overseas embassy I served in put up a miniature version of that, not just to make us less homesick but also to remind us what a fine thing we were protecting, working as diplomats on America's front lines.

Keeping a country or a community going is hard work, just as the president said. You knew without question why that work was necessary. There is nothing on earth more precious than our children and their future. Children do not raise themselves. They need a family and a community, they need values, and they need protection from the dangers of a dangerous world.

Because of you, the city council built sidewalks and fixed the playground and hired the crossing guard. Because of you the school didn't lay off teachers or close down the library when the budget crunch hit. You raised money, reached out to your friends to help you, fought when you needed to fight. You complained about the dangerous potholes and the drug dealers. And you found the time and money needed to give your kids the chance to succeed: Sunday school, music lessons, soccer practice, the sacrifices required to put kids on the track to happiness as good citizens.

But now they tell you that everything has changed. It's no longer enough just to make sure your kids do their homework and don't do drugs and don't get pregnant. Now you're supposed to check your mail for anthrax and keep a supply of duct tape because bearded strangers want to kill your children.

I was a U.S. diplomat for 20 years, one of the best jobs in the world. I talked to foreigners and persuaded them to do what America asked. You've probably heard that foreigners hate America, that they hate our freedom. It's not true, any more than it was true the time your daughter said, "I hate you, Mom." It's a punch in the stomach to hear it, though.

I wish I could take you with me tomorrow to get the real story. Whether you went to Rome or Ramallah on the West Bank (a grim place these days), people would be polite and genuinely happy to talk to an American mom. They don't hate you, or your husband, or America's freedoms. Though they might not admit it to their friends, a lot of them would sneak out for a hamburger at McDonald's if they could.

But what about the public opinion polls that show that foreigners think we're a threat to world peace? The image of the American government is indeed the worst it has ever been during the country's 60 years as a superpower. Iraq has been a terrible public relations nightmare, with Guantánamo and Abu Ghraib, and Iraq isn't the whole story.

Foreigners get their image of the United States from the president. They still love John F. Kennedy. They liked Bill Clinton. They respected George H.W. Bush for the way he brought the world together to liberate Kuwait in 1991. Ronald Reagan's character was attractive even when his policies were not. But the current president projects a different image.

His face and voice and swagger reassure many Americans, but they make him a political liability for our allies. Nothing this president says now can repair the world's image of an ignorant, selfish, irresponsible America, especially after he let his neoconservatives tell the world America has no use for the United Nations or treaties or international law.

America used to be the biggest, bravest, most responsible kid on the international playground, the natural leader. But nothing we diplomats said or did could stop the erosion of that leadership after 2001. We were still the biggest, but suddenly also the meanest. We tell our kids they have to stand up to schoolyard bullies. That's what our foreign friends tell their kids too, and currently they're talking about standing up to us. This is not good for us, and it's not good for the world.

The biggest difference between Europeans and Americans is our sense of fear. European politicians need to keep their budget deficits low. To cut military spending, they are willing to admit to their people that the military threat is gone. If Europeans can feel safe, Americans should feel doubly safe. No one can touch us militarily -- not Russia, not China -- and no one wants to. If we choose to spend our money on high-tech military hardware, that's our business. Europe wonders, however, what we plan to do about the real threats: economic stagnation, climate change, illegal immigration, disease, environmental degradation. And terrorism.

Three years ago some 3,000 people died in New York and Washington, victims of 19 fanatics who believed God had ordered them to strike at America's global dominance by whatever means necessary. The U.S. government had dropped the ball on terrorism. It was busy with Washington politics as usual, and lost sight of the real world outside. The terrorists got lucky, and proved to the world that even the superpower is vulnerable.

Our reaction was normal and appropriate. We went into Afghanistan and destroyed al-Qaida as an organized force. We would have done a better job if the secretary of defense hadn't had his heart already set on Iraq. Still, the terrorist training camps are gone.

There will always be fanatics who think the American government is an enemy in the wars they are fighting. You and your family and your hometown, however, are not the terrorists' targets, not then, not now, not in the future. Attacking the American people violates common sense and basic survival instincts, not just their morality and ours. We are too strong to be defeated by any outside force, a fact the terrorists know very well.

Al-Qaida's goals are political, and much closer to home. One of them, which was to weaken American influence on the Islamic world, unfortunately has been achieved -- not by the 9/11 attacks but by the president's mistake in invading Iraq. By misreading the Middle East, the United States lost much of its ability to help countries like Pakistan and Saudi Arabia, whose war on terrorism is genuinely a matter of national survival. American soldiers and diplomats and businesspeople across half the planet are in deadly danger now because their president is oblivious to the politics that drive terrorism.

Getting Iraq wrong was forgivable, maybe. I was so certain that Iraq would be a disaster for America that I quit my career to be free to speak out publicly. Realists were in the minority, however. Most of the experts found it prudent to ignore the evidence that Iraq was not a threat to the United States. One reason they kept silent, I learned from former colleagues more senior than I, is that Bush does not forgive subordinates who offer advice he does not want to hear.

As a superpower we can afford some mistakes. But did the president learn anything from the Iraq fiasco, anything at all from the more than 1,000 American men and women who have died so far? He has no regrets, he says, even now. Are you confident that he will ask the opinion of the real experts at the CIA and State Department before he launches another war, or will he misread someone else as a madman the way he misread Saddam Hussein and his imaginary weapons of mass destruction?

President Bush is strong, his speechwriters maintain, because he does not shrink from sending American soldiers to die. It may seem strange to you, but it takes little political courage to send American soldiers to war. Americans have never turned down a president who invited them to battle.

True moral courage recognizes that there is no automatic connection between killing foreigners and defeating America's enemies. You've been encouraged to forget Vietnam. President Nixon knew Vietnam was lost from the moment he took office in 1969. He preferred to sacrifice 20,000 more American lives and kill 2 million additional Vietnamese rather than risk losing your parents' vote by admitting defeat. Nixon was brave enough to make some tough economic decisions, at least. What moral courage has President Bush shown? He never vetoed a single piece of legislation, never said no to a spending bill, never fired anyone, not till CIA director George Tenet lost control of his angry intelligence experts and had to step down this summer.

But the president's most terrifying weakness was his loss of control over his Cabinet and the budget. No strong president lets his secretary of state get outmaneuvered every time by his secretary of defense. No strong president allows defense contractors to dictate his military spending: Our troops on the ground in Iraq die needlessly because Defense Secretary Donald Rumsfeld considers them an expensive nuisance and preferred to give the money to Lockheed and General Dynamics.

It's easy to become popular in Washington by spending money, just as it's easy to become popular in your hometown by buying your friends fancy dinners. You must have at least one friend who maxed out the credit cards and had a wonderful time. What happened to that family? Now think of the United States. The president put a few thousand dollars back in your pocket by cutting taxes. He didn't cut spending to pay for the tax cuts. On the contrary, he allowed the U.S. bureaucracy to bloat again after President Clinton had painfully cut it back. The deficit is the largest in our history, with no plan in sight to keep it from growing indefinitely.

Deficits don't matter, Vice President Cheney said. But your kids are going to spend the rest of their lives paying back, with interest, the money we are borrowing from our Chinese friends to make up for this government's extravagance. President Bush says he won't give foreigners a veto over U.S. security. But he already has. All they have to do is stop buying our Treasury bills.

Oil has hit more than $50 a barrel. Two billion Chinese and Indians intend to drive cars the way we do, and it isn't going to get better. The rest of the world saw this coming and is investing in renewable energy and conservation. I can't figure out what the president has in mind besides praying that our buddies in Venezuela and Nigeria and Saudi Arabia keep pumping. We can get only six months' worth of oil by opening up Alaska's remaining wilderness to Exxon. Better than nothing, I suppose, but six months isn't a long time in your kids' life.

The world is a less scary and more manageable place when moms are looking after it. If you don't vote for a candidate who understands that, life in America could soon become as frightening as Bush tells you it already is. And please, please, lock the handgun somewhere your kids can't get at it. You will never need to shoot a terrorist. But the soccer team needs your kids.

Brady Kiesling was the first of three U.S. diplomats who resigned publicly in February and March 2003 to protest the looming war with Iraq.