Down, dirty and dull

Dick Cheney and John Edwards came out swinging, but the only people they knocked out were in the audience. 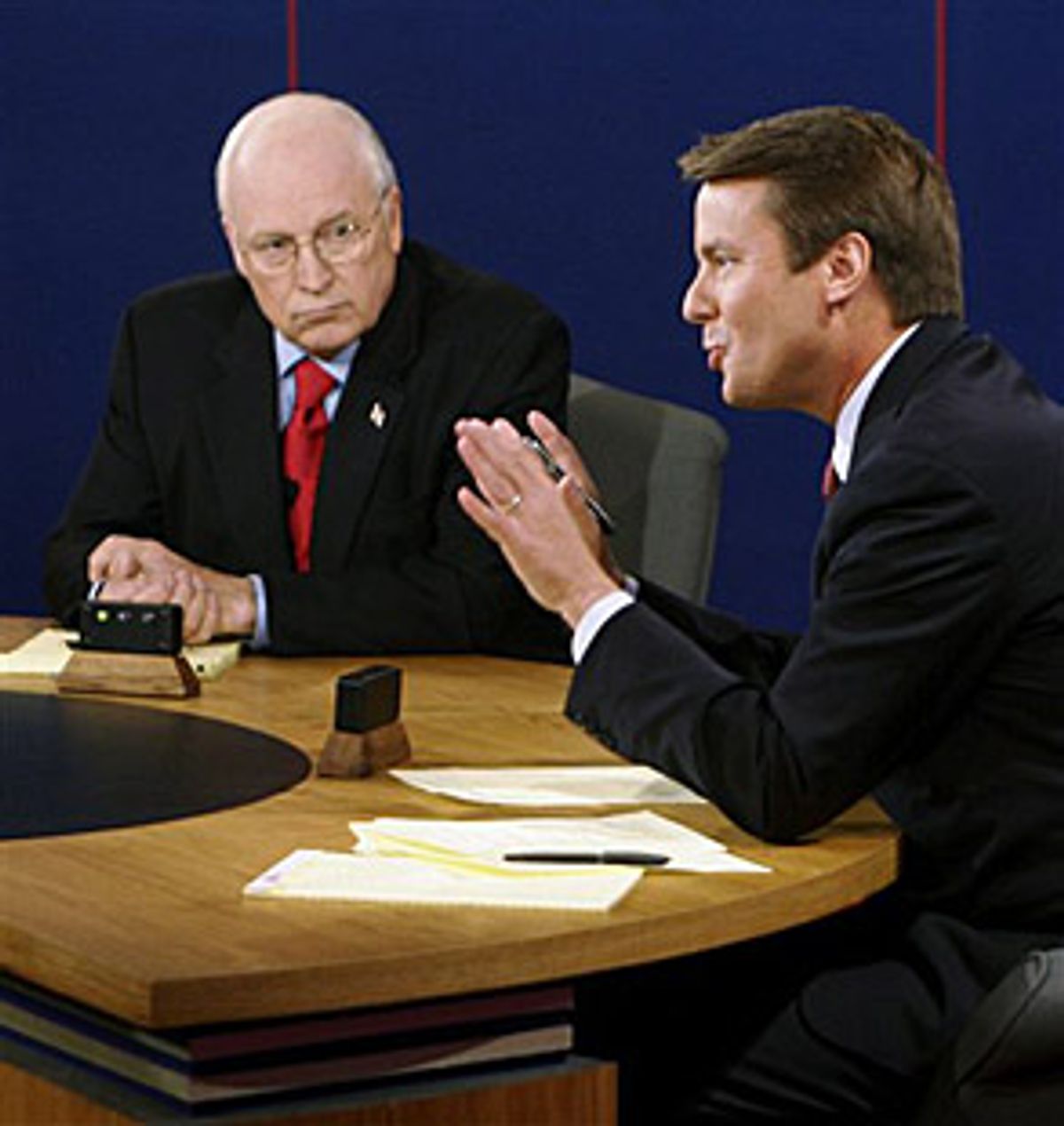 Here's how bad it was Tuesday night. Fifteen minutes before the end of the vice-presidential debate -- with Dick Cheney still talking about the terrorists who want to kill us, with John Edwards still trying to circle back to some prior question -- the spinners for the two candidates came barging into the press room like rodeo clowns trying to save a fallen cowboy.

They were too late.

Dick Cheney and John Edwards debated for a little more than 90 minutes Tuesday, but the snippy, sordid and yet somehow sleepy affair seemed to stretch on for days. It was a dispiriting debate, and it left both men diminished. Edwards repeatedly missed chances to defend his ticket; in a moment that was at least a little Dukakis-esque, he let Cheney get away with claiming that he had dishonored Iraqis killed in George W. Bush's war. Cheney simply declined to answer questions he didn't like.

Who won? Who knows? While it was immediately clear last week that John Kerry won the first presidential debate, reaction to the vice-presidential debate was mixed. A CBS insta-poll has Edwards winning decisively; ABC, in a poll weighted heavily to Republicans, has Cheney on top. And except for Georgia Sen. Saxby Chambliss -- who said that Cheney "took John Edwards out to the woodshed" -- even the spinners were a little subdued. Democrats called Edwards youthful and energetic; Republicans said Cheney was steady, experienced and clearly in command.

Will any of it matter? Probably not. Even decisive vice-presidential debates don't alter the outcome of elections -- remember Vice President Lloyd Bentsen? -- and this one wasn't decisive. While each side claimed victory Tuesday, neither predicted that the debate would change the race. "These things are temporary," said Bush-Cheney's Ken Mehlman, "but I think this was good because it showed substance over rhetoric, and substance wins." Kerry-Edwards advisor Tad Devine countered: "Dick Cheney's job tonight was to stop the momentum, and he didn't do it."

Both Edwards and Cheney had their moments. Early on, before he ran out of steam, Cheney came off as confident and clear, even as he defended the Bush administration's misadventures in Iraq. "What we did in Iraq was exactly the right thing to do," Cheney said in his first response. "If I had it to recommend all over again, I would recommend exactly the same course of action." Edwards was all over him. "Mr. Vice President," he said, "you are still not being straight with the American people."

Cheney took a few direct shots at Edwards, too. When Edwards vowed that he and Kerry would defend America aggressively, Cheney shot back: "Your rhetoric, Senator, would be a lot more credible if there was a record to back it up. There isn't."

But as their exchanges dragged on, the candidates missed their targets as often as they hit them. Edwards frequently seemed a half-step off. When Cheney defended the reasons for starting a war, Edwards blasted him for misrepresenting the current conditions in Iraq. When Cheney talked up current conditions in Iraq, Edwards knocked him for linking Saddam Hussein to Sept. 11. When Cheney characterized Kerry as weak on defense, Edwards answered by saying that a "long résumé does not equal good judgment." It was a good line, but by the time Edwards really needed it -- late in the debate, in a response to a question about his relative inexperience -- he'd already wasted it.

Edwards' attacks sometimes seemed forced; he mentioned Halliburton at least a half-dozen times, sometimes stretching hard for a way to tie it into the conversation. And in a discussion on gay marriage, Edwards volunteered the fact that one of Cheney's daughters is gay and praised the vice president for loving her anyway. It was gratuitous and weird, and it might have been disastrous if Cheney's response hadn't been every bit as strange. Given 60 seconds to respond to Edwards' descriptions of the real-life problems facing gay couples, Cheney said: "Let me simply thank the senator for the kind words he said about my family and our daughter. I appreciate that very much."

It wasn't the only odd choice the vice president made. When Gwen Ifill asked the candidates about Israel and the Middle East, Cheney passed on a chance to answer. Edwards launched a withering attack on Cheney's record in Congress, noting that he'd voted against Head Start, against a prohibition on plastic weapons that can pass through metal detectors, against the Department of Education, against Meals on Wheels, against a holiday for Martin Luther King and against a resolution calling for the release of Nelson Mandela. Cheney's response: Edwards' "record speaks for itself. And frankly, it's not very distinguished."

When Edwards made an extended attack on Cheney for his Halliburton work -- alleging that Halliburton, under Cheney, did business with Libya and Iran and was forced to pay fines for providing false information "just like Enron and Ken Lay" -- Cheney responded by pointing to a "fact check" from the Annenberg Public Policy Center. But Annenberg's work didn't deal with the charges Edwards made; it dissected an ad in which the Kerry campaign took Cheney to task for his ongoing financial relationship with Halliburton. Annenberg's central point: While Cheney continues to draw deferred compensation from Halliburton -- $1.4 million two days before he took office and about $400,000 since then -- that money isn't contingent on the company's current work in Iraq.

Cheney's best line came midway through the debate. It just happened to be false. Minimizing Edwards' political experience, Cheney said: "The first time I ever met you was when you walked on the stage tonight." Edwards didn't call Cheney on it -- another missed opportunity -- but his wife did. Before Cheney left the debate stage, Elizabeth Edwards told the vice president that he had indeed met Edwards before, at a Senate prayer breakfast. Minutes after the debate ended, the Kerry-Edwards campaign circulated a photo showing Edwards and Cheney at the breakfast together.

Cheney offered up a few other falsehoods. He said, for example, that he has never "suggested there's a connection between Iraq and 9/11." In fact, Cheney has "suggested" it constantly and said it outright at least once: In a 2003 appearance on "Meet the Press," Cheney said that Iraq was the "geographic base of the terrorists who have had us under assault now for many years, but most especially on 9/11."

On style, the advantage probably went to Edwards, but not by much. Cheney wasn't charming, but neither was he the dark lord that he sometimes seems to be -- even if the loudspeakers in the press center gave his heavy breathing an unmistakable Darth Vader quality. The vice president actually looked up now and then, and his matter-of-fact style fit the advance billing from the Bush campaign: Cheney would be straightforward and gimmick-free. Predictably, Edwards was the more TV-ready of the two, but in his effort to match Cheney in knowledge, he seemed to cede some of his heart. Until his closing statement -- when he spoke of watching his father teach himself math to better his career -- Edwards offered little of the hopeful emotion that makes him so appealing. His "Two Americas" stump speech may be overdone and trite now, but it was hard not to long for it. Still, Edwards' closing was far more appealing than Cheney's; it would be hard to find a clearer contrast between messages of hope and fear.

For all the contrast, the debate wasn't the knockout punch that either side might have hoped for. Both sides came loaded for bear. The Democrats shipped in three governors, two senators, a handful of former Cabinet secretaries, the Rev. Jesse Jackson, former U.N. Ambassador Richard Holbrooke, former Air Force Chief of Staff Gen. Merrill McPeak, DNC chairman Terry McAuliffe, and almost a dozen Kerry-Edwards campaign advisors to help them spin the debate. The Republicans countered with campaign advisors Mary Matalin and Matthew Dowd, RNC chairman Ed Gillespie, former Wyoming Sen. Alan Simpson and a host of other GOP notables.

But press interest was tepid; the gymnasium set aside for reporters was less than half full, and many of the campaign surrogates found themselves wandering without takers through the gym's "spin alley." Former Deputy Treasury Secretary Roger Altman looked bored, standing alone under a huge sign that bore his name. The Rev. Jesse Jackson watched CNN for a while, told a reporter that Edwards had "more energy" and "better command of his information," then switched the subject to the future of Iraq and the suppression of the black vote in the United States.

If Cheney and Edwards want to feel better about their performances Tuesday night, they can take solace in this. As bad as they were, moderator Gwen Ifill was even worse. She lost track of the order of questioning at one point, then cut off Edwards mid-sentence in order to correct her error. She suggested -- in a bizarre non sequitur -- that Kerry and Edwards were "trying to have it both ways" by opposing gay marriage when Kerry comes from a state whose highest court backs gay marriage. She claimed, falsely, that Kerry "changed his mind about whether to authorize the president to go to war." And she imposed -- and then actually enforced -- a silly rule prohibiting the candidates from mentioning their running mates by name while talking about their own qualifications.

Those running mates will be back on the main stage Friday night, when they meet in St. Louis for a town hall meeting. The vice-presidential sideshow will be over, and not a minute too soon.