The increasingly strange behavior of Republican Sen. Jim Bunning has led to speculation that he is suffering from some kind of dementia -- and tightened a race he once had in his pocket. 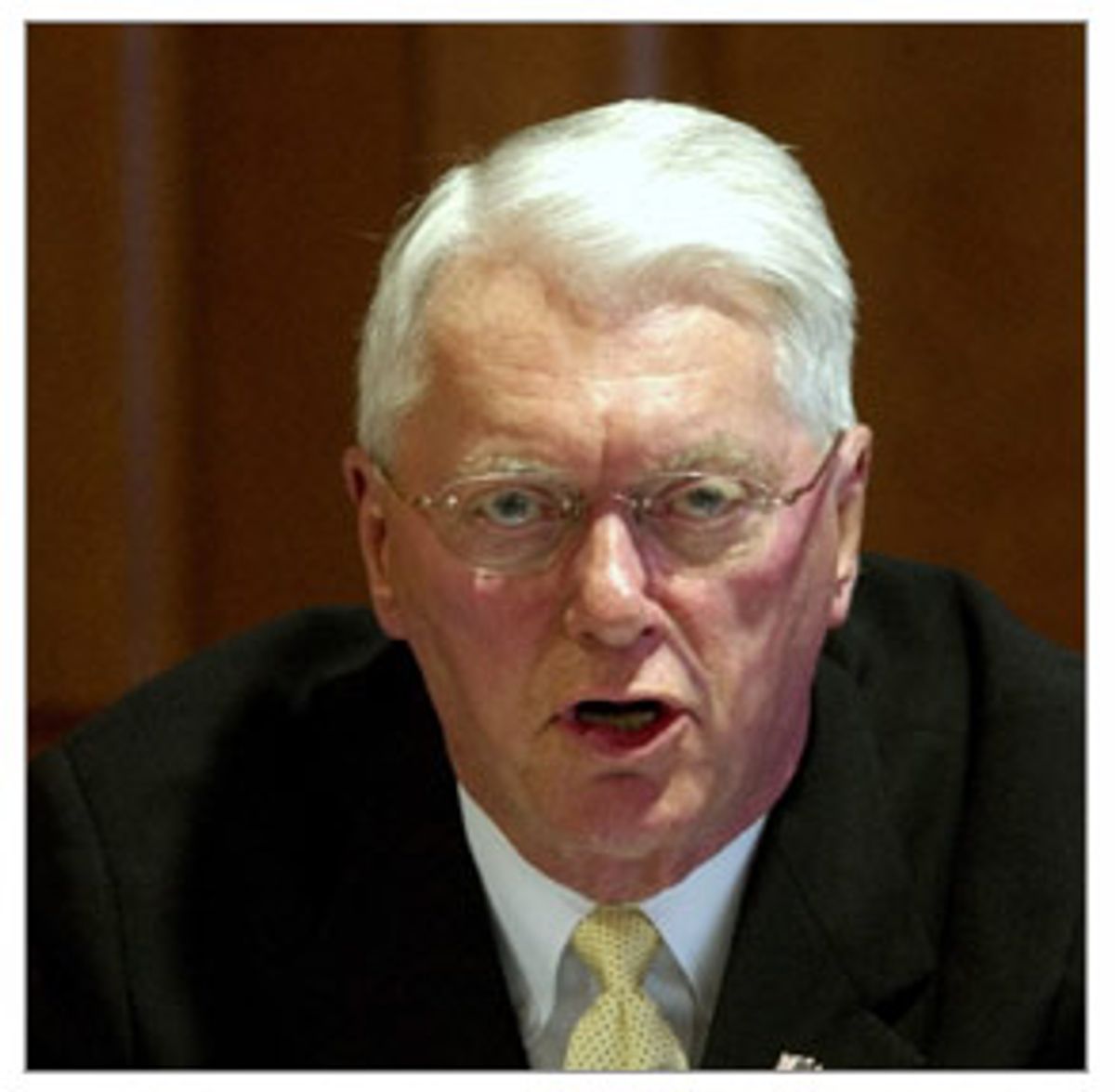 It's no secret in Kentucky that Sen. Jim Bunning, a Republican who was expected to coast to reelection on Nov. 2, has been acting strange. Over the past few months, Bunning has angrily pushed away reporters, exchanged testy words with a questioner at a Rotary Club and stuck to brief, heavily scripted remarks at campaign events, delivered in a halting monotone. The former major league baseball star now travels the Bluegrass State with a special police escort, at taxpayer expense. His explanation? Al-Qaida may be out to get him.

More substantively, the incumbent would agree to only one debate with his Democratic challenger, state Sen. Daniel Mongiardo. And the rules Bunning negotiated were bizarrely rigid: The encounter could not be live; the taping has to occur in the afternoon, not the evening; no audience could be present in the studio; and, under threat of legal action, Mongiardo could not use any sound clips or video of Bunning's debate performance in campaign advertisements.

This apparent fear of the spontaneous has spurred rumors in Kentucky that Bunning, a member of the Baseball Hall of Fame, is suffering from some sort of dementia, perhaps Alzheimer's. Bunning has declined to release his medical records. But until now, there was nothing hard to suggest that the one-term Republican senator was anything but a crotchety, occasionally confused, or arrogant old man.

On Monday, however, Bunning -- who turns 73 this month -- abruptly retreated behind yet another barrier, in an action so inexplicable that it appears likely to bring the rumors about his health, now referred to obliquely in Kentucky news reports, into open discussion. It may also mark a turning point in a race that, against all expectations, has been tightening recently.

Saying falsely that he was needed in Washington this week for Senate votes, Bunning tore up his own carefully crafted debate agreement and refused to return to Kentucky on Monday for his one scheduled debate with Mongiardo. It was to have taken place at 2:30 p.m. Monday in the Lexington, Ky., studio of WKYT-TV. Instead, Bunning insisted on "debating" via satellite from the womblike conditions of the Republican National Committee headquarters studio in Washington.

The senator refused to allow a member of the Kentucky media to be present at the RNC studio to monitor whether Bunning was receiving assistance with his answers, according to Mongiardo campaign manager Kim Geveden and WKYT news director Jim Ogle. And Bunning refused to engage reporters via satellite in a previously agreed upon post-debate news conference, insisting instead that his 15 minutes of answering questions occur by telephone, without accompanying video footage.

"The people of Kentucky are very smart. They can put two and two together," Bill Garmer, chairman of the Kentucky Democratic Party, told me by telephone Tuesday.

Garmer and former Kentucky Gov. Julian Carroll, a Democrat, called on Bunning last month to release his medical records, and Kentucky news reporters have also sought the records, all to no avail. A spokesman for Bunning, David Young, did not respond to phones calls and an e-mail from Salon seeking comment.

Mongiardo campaign manager Geveden said Bunning is "clearly afraid" of debating. "For six months we have been pursuing debates with Jim Bunning, and all he does is hide. He's hiding from the people of Kentucky, he's hiding from the press corps, and when he does on occasion travel into the state, he surrounds himself with bodyguards. Now he's hiding behind a satellite dish in Washington," Geveden said in a telephone interview Monday.

The full political impact of Bunning's debate maneuver won't be known until after Wednesday, when WKYT plans to air the debate in Lexington and on its sister stations in Hazard and Bowling Green. The broadcast is slated for 8 p.m., right before the third presidential debate. To symbolize Bunning's retreat from the public square, WKYT's Ogle said he planned to leave the screen blank when airing the audio of Bunning's post-debate news conference. He said he would not fill the empty visual with a photograph of the senator. "We'll do that just to make the point, with a lead-in" that Bunning abruptly changed the rules, Ogle said.

Until recently, the Kentucky Senate race was shaping up to be an easy home run for Bunning. In mid-August, a Survey USA poll conducted on behalf of two Kentucky television stations showed the incumbent with a 24-point lead over Mongiardo, a surgeon from Hazard, Ky. Bunning had raised a vast amount of money, with $4 million in the bank in June, compared with the Democrat's $300,000. The race was considered so over that the Democratic Senatorial Campaign Committee, the campaign arm of Senate Democrats, wasn't spending any money in Kentucky, preferring instead to channel funds to races where Democrats appeared to have at least half a chance.

Then, slowly, the dynamic began to change. At first, Bunning's gruffness with reporters, odd statements and apparent discomfort with public appearances merely sparked gossip. Then the incidents began making news. In February, he "shocked many Louisville civic leaders," as the Louisville Courier-Journal put it, by declaring at a chamber of commerce luncheon that one of two new bridges the city had expected to build with federal funds would be delayed because northern Kentucky needed the money more. Not only was Bunning's statement factually wrong, but it forced the Louisville-area Republican who had worked to secure the bridge funding, U.S. Rep. Anne Northup, to scramble to reassure business leaders. Bunning was "confused" and "mistaken," she told reporters. Bunning at first denied he had made the remark, then admitted he had after he was told his talk had been recorded.

Likewise, Bunning at first denied in April that he had said at a private Republican Party event that the dark-complexioned Mongiardo looked like one of Saddam Hussein's sons and "even dresses like them, too." He admitted making what at best was a bad joke, at worst an ethnic slur, only after realizing it had been videotaped.

But August was the real meltdown month for Bunning. At an annual Kentucky political event called Fancy Farm, Bunning was captured on videotape stalking off from a TV reporter after a Mongiardo supporter waved a campaign sign in view of the camera. The reporter gaped in surprise, her microphone still extended, as Bunning disappeared into the crowd.

A videotape provided to Salon by the Mongiardo campaign shows Bunning at another campaign event reading slowly from written remarks before quickly turning the stage over to Kentucky's senior senator, Mitch McConnell. McConnell, a Republican, did the heavy lifting of telling the crowd why Bunning should be reelected.

Then Bunning's security detail became a campaign issue when the Paducah Sun, citing local police sources, said in August that the senator was concerned about the possibility of an al-Qaida attack. Bunning warned ominously in an interview with a Paducah television station: "There may be strangers among us." When pressed, the Bunning campaign said it had requested extra security for Bunning upon the advice of the Senate Sergeant at Arms Office. It turned out, though, that the sergeant at arms had simply suggested that senators in general remain alert. There had been no specific threat against Bunning.

After the Kentucky Fraternal Order of Police endorsed him in August, Mongiardo used the occasion to poke fun at Bunning's large security detail, ribbing him for voting against extra police funding while requesting extra protection for himself. "Someone should ask Senator Bunning what is more likely: [that] Al-Qaida is waiting for him at the Quilters Museum in Paducah or that another Kentucky school child will be approached by a drug dealer?" Mongiardo said, according to the Associated Press.

Also in August, Bunning got into a testy exchange with a longtime member of the Rotary Club of Paducah about military force readiness. Chick Ward, a Republican and a 27-year veteran of the Navy, challenged Bunning's assertion that U.S. forces were not stretched too thin with the deployments in Iraq and Afghanistan. Bunning, apparently unused to such challenges, got red-faced and bristled. The club later asked Ward to resign, saying he had embarrassed the senator, according to the Paducah Sun and the Rotary Club's newsletter.

As newspaper editorials drew attention to Bunning's gaffes and strange behavior, the Republican began releasing a barrage of negative attacks on Mongiardo -- which seem to have backfired. In one ad, Bunning shows a luxury home and airplane that he implies belong to Mongiardo, whom the ad ridicules as a "Medicaid Millionaire" who gamed the federal healthcare program for the indigent. Problem is, the home and airplane didn't belong to the Democrat. And the ad neglected to mention that Mongiardo worked as a doctor in one of the poorest areas of Kentucky, where Medicaid is prevalent, and his billings were for more than a decade's worth of treating patients. Mongiardo deftly turned the attack back on Bunning, saying he was proud to have never turned away a patient just because he or she wasn't wealthy.

All this has translated into momentum for Bunning's younger and more energetic challenger. Sensing new opportunity, the Democratic Senatorial Campaign Committee last week gave the Mongiardo campaign a much-needed infusion of cash. The amount was described as in the "tens of thousands" of dollars, but it was less than the $466,000 that federal rules allow the national party to pump into a Kentucky Senate race, a committee spokeswoman told reporters.

Meantime, a new Survey USA poll conducted Oct. 6-8 showed that Bunning's once commanding lead has been cut in half, to 11 points. The Mongiardo campaign's private polling shows the race even closer, to an eight-point difference. Then on Saturday came the news that Bunning would not appear with Mongiardo at the Lexington debate.

WKYT news director Ogle told me that the Bunning campaign had phoned the station on Saturday saying the senator would be tied up in Washington all week and unable to travel back to Kentucky for Monday's 2:30 p.m. debate taping. (The "tied up in Washington" explanation turned out to be a lie: The Senate's last recorded vote of the week took place at 12:30 p.m. on Monday. There are no more recorded votes for the week, the Senate Republican cloakroom confirmed.)

Negotiating through Ogle, the Mongiardo campaign offered to reschedule the debate. Bunning said no. Mongiardo offered to fly to Washington to accommodate the senator. Bunning said no. Then, when Bunning insisted on appearing via satellite from the RNC headquarters, Mongiardo asked him to allow a neutral observer from the Kentucky news media to be present to ensure that Bunning didn't receive assistance with his answers. Bunning said no.

"I've worked in this business for 25 years, and I've never run into this kind of situation, so locked in stone," Ogle said. "They [the Bunning campaign] say it's got to be at 2:30 p.m. Monday. And that's it."

The debate was taped Monday and will air Wednesday evening, but only in Lexington and in Bowling Green and Hazard, where WKYT has sister stations; the rest of Kentucky will have to read about it in newspapers.

This incident will surely dog Bunning in the last three weeks of the campaign. In his closing and opening statements, the senator's eyes appeared to be scanning text, prompting reporters to ask in the post-debate news conference whether he was using a teleprompter. Bunning declined to answer, saying only that he has stuck to the rules, apparently referring to the original agreement that he himself violated by appearing from Washington. That agreement said the candidates could use "notes" during the debate.

Kentucky's Democrats are unlikely to let the issue lie. "He's sure using every flimsy excuse to keep away from Kentucky voters," said Garmer, the state Democratic Party chairman. Does he think Bunning is suffering from an undisclosed medical condition? "Well, it is certainly the obvious question to ask," Garmer said.