Bush gets that sinking feeling as a steady and presidential Kerry sweeps the series. 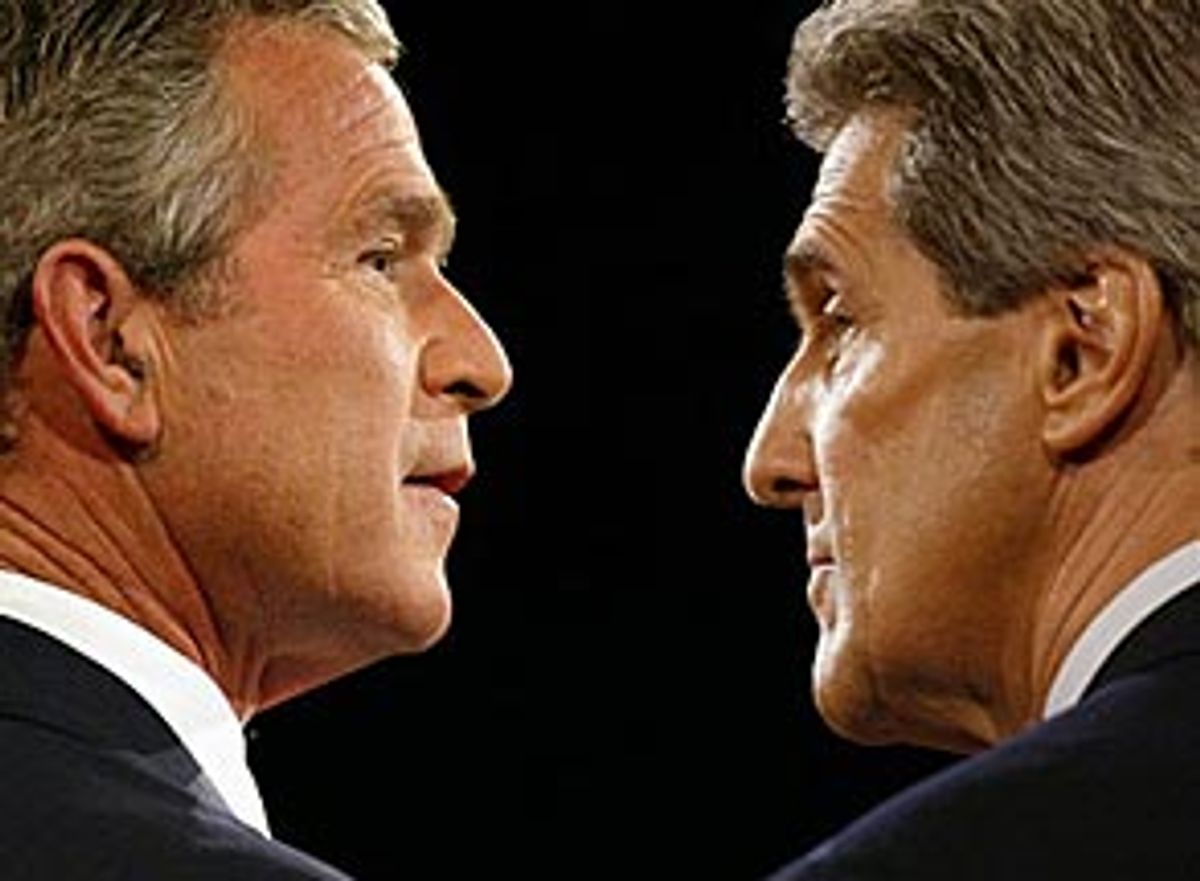 Can George W. Bush feel it slipping away?

It is early -- things can change -- but the momentum in this race has turned against the president. George W. Bush and John Kerry met for their third and final debate Wednesday night. It wasn't a Kerry blow out like the first one. It couldn't be. But for third night in the row -- four if you count the Cheney-Edwards debate -- the challenger went face-to-face with the incumbent, and the challenger got the better of it. A Gallup Poll of debate watchers gave Kerry a 14 point win; a CBS News poll of uncommitted voters gave it to Kerry by 14 points; and ABC called it a tie but said "bragging rights" go to Kerry because the ABC poll over-sampled Republican voters.

Over in a quiet corner in the press hall an hour after the debate ended, Karl Rove said it wasn't so. He said he still believes Bush won all three debates, even that disastrous first one. He said that anybody who believes the post-debate instant polling is "kidding yourself." The momentum belongs to Bush, he said, and "the wind's at our back."

There may be something on Bush's back, but it's not the wind. Bush needed a decisive victory Wednesday night to stop his sudden and now steady slide in the polls. He didn't get it. Bush wasn't bad Wednesday; his performance was plainly the best of his three. He was clear and focused, and he offered buckets of the good ol' boy Texas charm that seemed to be AWOL for the first two debates. He didn't scowl and he didn't stumble. He scored points on taxes -- looking directly into the camera and telling workers how he put more money in their pockets -- and he came off as utterly reasonable on religious freedom and gay rights.

But Kerry was right there. He passed the presidential test in the first debate, and he did less than nothing to hurt himself in the second two. The man may not have been scintillating in St. Louis and Tempe, but he was steady. Again and again Wednesday night, Bush wandered off into some tangent or tall tale. Again and again, Kerry calmly reined him back in and set the record straight. Asked about jobs -- a topic that hurts him in swing states like Ohio, and one for which he has no real answer -- Bush segued quickly into an answer about education. Kerry called him out. "I want you to notice how the president switched away from jobs and started talking about education," he said. It was a small point, but it was effective. When Bush tried to steer a job discussion to education again later in the debate, every viewer must have seen exactly what he was doing. "Listen," he insisted, "the No Child Left Behind Act is really a jobs act when you think about it." You could almost hear people saying, "Sure it is."

When he wasn't keeping Bush in check, Kerry was helping himself. He proved himself surprisingly agile at questions of faith. He spoke eloquently about the balance between his religious views and his public life -- quoting the Bible along the way -- and then still had enough in reserve on the subject to answer it anew the second time it came up. Bush parked a question about what he's learned from the women in his life -- he even had Kerry laughing at his jokes about how the first lady sets him straight -- but Kerry answered back with a response about "marrying up" (to ketchup heiress Teresa Heinz, of course) that was funnier, and a story about a conversation with his mother just before she died that was more moving. Kerry came off as likable then. Earlier in the night, when he said swapping after-school programs for tax cuts for the rich "not in my gut" and "not in my value system," Kerry seemed both human and strong. It turns out he's not Michael Dukakis.

Bush tried hard to tag Kerry as a tax-and-spend liberal -- he accused him of sitting on the "far left bank" of the mainstream -- but the attacks were often so over-the-top that they probably missed their mark. And with the mainstream media finally rising to its role as debate fact-checker, it's hard to think that too many viewers were fooled by the familiar falsehoods Bush peddled again Wednesday night. Kerry "voted to increase taxes 98 times"? No. "Three-quarters of al-Qaida leaders have been brought to justice"? No.

When Kerry knocked Bush for flip-flopping on Osama bin Laden -- first saying he wanted him "dead or alive," then saying that he wasn't "that concerned" about him -- Bush claimed that he'd caught Kerry in a lie. "Gosh," the president said, "I just don't think I ever said I'm not worried about Osama bin Laden. It's kind of one of those exaggerations." Only it wasn't. As every major media outlet will report Thursday, Kerry quoted Bush exactly right.

Kerry stumbled on the facts a few times Wednesday night. He said that Bush had never met with the Congressional Black Caucus, when in fact he had. He said the minimum wage, when adjusted for inflation, is the lowest it has been in 50 years. In fact, it was bit lower in 1989. But Kerry's factual errors weren't aimed at obscuring larger truths -- Bush has an unhappy track record with the Congressional Black Caucus and African-American groups more generally, and the minimum wage is awfully low. Whichever statistics you choose -- the private sector numbers Kerry favors, the overall numbers Bush likes to cite -- the country has suffered a net loss of jobs on Bush's watch.

Bush's misstatements -- when they're not accidental, like his goof last week about the timber company he didn't know he owned -- almost always aim at overselling his accomplishments, downplaying his shortfalls or trashing John Kerry. Democrats think the cumulative effect of it all is beginning to have a cumulative effect on voters.

"The president's charges are so specious they're not likely to cause any political harm," Kerry spokesman Tad Devine said just after the debate. "When the president launches into these attacks, people just don't listen to them anymore. They've seen so much of it. I think it's a failed strategy. If it worked, the incumbent president of the United States wouldn't be sitting here with a 47 percent job approval rating in the Gallup Poll, with a horserace number in almost every national poll below 50. He'd be ahead. He's the incumbent. He needs to be ahead right now to win. And I think the failure of his strategy is demonstrated by his position in this race."

The Kerry campaign left Phoenix Wednesday bullish on the race but a little lukewarm about the debate. Kerry had won, Kerry aides said, but there was none of the euphoria that exploded around them two weeks ago in Miami. "The first debate was such a decisive blow-out, I don't think we're likely to see that for several more election cycles, never mind in the rest of the debates," Devine told Salon Wednesday night. Still, if the first debate was the "pivot point" in the race, Devine said the second two built on the first. "We've got the momentum we need to close out the race," he said.

The Bush campaign paints a different picture, of course. Under giant orange signs emblazoned with big Ws, the Bush spinners poured out into spin alley and argued hard that the president had won again and won "decisively." Bush-Cheney campaign manager Ken Mehlman said the final debate had drawn clear lines between the president and his challenger, clear differences on taxes and terror, on strength and weakness, and that it would play well with both the Republican base and undecided voters.

Still, Mehlman also acknowledged that the race was tight, even if he danced around the question of whether the race had tightened. Last week, Mehlman told reporters that he thought Bush was ahead by 2 points nationally. Wednesday, he said that the number was now 1. But Kerry hasn't really picked up voters, he insisted. He has just "energized" what was once a "dispirited Democratic base."

With the debates over, both campaigns will now focus on the nuts-and-bolts work of the final days: getting out the vote, fighting -- or perpetrating -- voter fraud, and setting the stage for the legal fights that will surely come. Democrats are spilling over with stories of vote suppression, vote fraud and other electoral skullduggery from Florida to Ohio to Wisconsin to Minnesota. Republicans like Mehlman are warning about voters who have registered multiple times, and they're repeating the GOP mantra: "Our goal is to make sure that every eligible voter can vote." Both sides seemed to be setting the stage for arguments they will make later: the other guys are stealing the vote.

Both sides are also bracing themselves for last-minute developments that might sway the race as much as the first debate did. Developments in Iraq could move voters, as could the pre-election terrorist attack that the administration keeps predicting. And then there's the question of dirty tricks. Karl Rove and the Bush family have a history of playing dirty late in tough campaigns -- against Ann Richards in Texas, against John McCain in South Carolina, against any number of local candidates who have found their lives turned upside down after running against Karl Rove. Rove wasn't laying out his playbook Wednesday night, but the Democrats were getting ready nonetheless. "We're ready for anything," Kerry advisor Joe Lockhart told Salon Wednesday. "There is a Bush family tradition: When you get behind, when your back is behind the wall, you do anything to win and to hold onto power."

Bush's back might not be against the wall yet, but three debates have pushed him awfully close to it. There are 19 days left until Nov. 2.