A Bush spokesman tells Salon there is nothing to the story. But as the final presidential debate looms, speculation grows about the mysterious bulge. 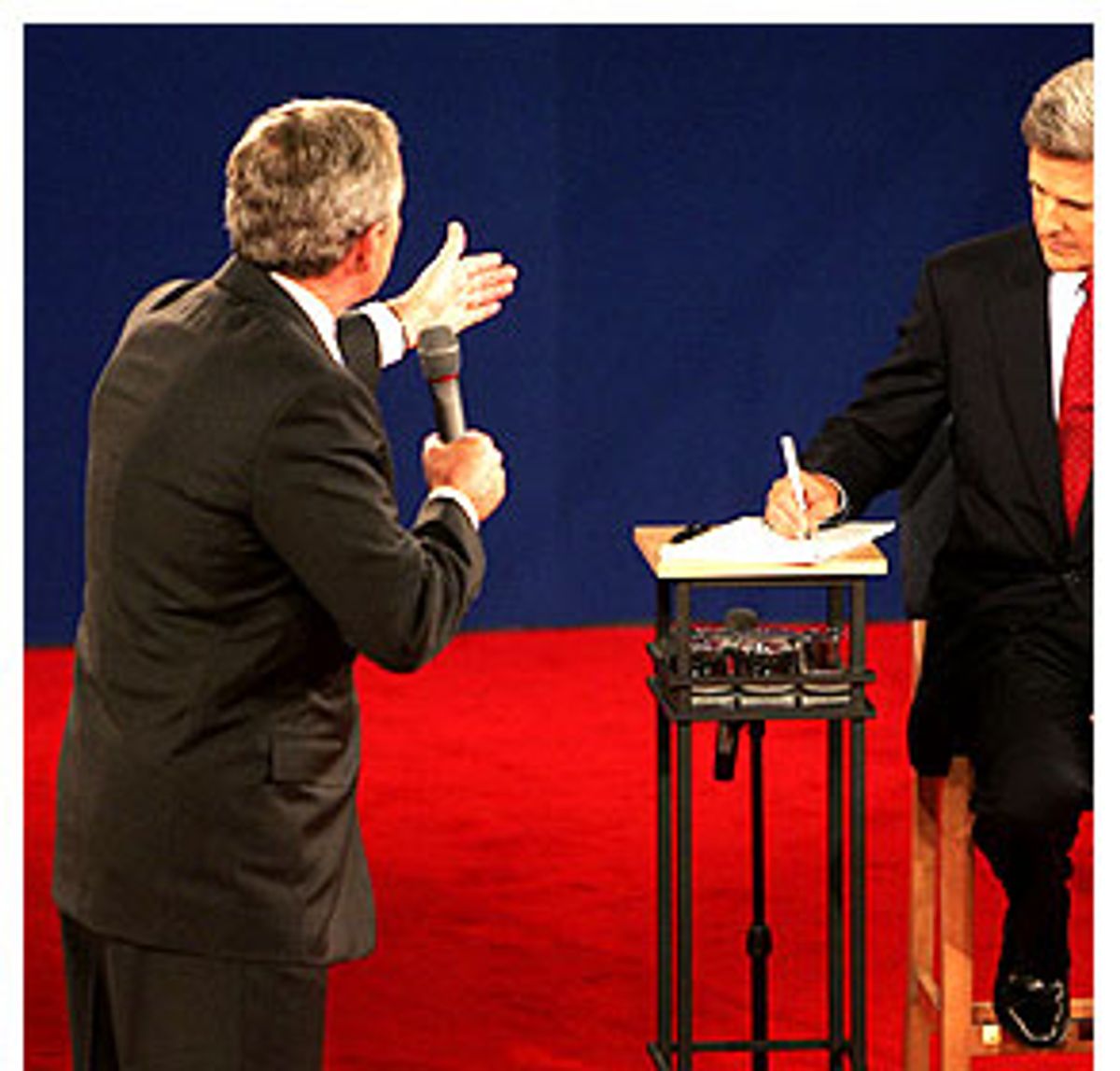 Speculation continues to run wild about President Bush's mystery bulge. Since Friday, when Salon first raised questions about the rectangular bulge that was visible under Bush's suit coat during the presidential debates, many observers in the press and on the Internet have wondered aloud whether the verbally and factually challenged president might be receiving coaching via a hidden electronic device.

Now a technical expert who designs and makes such devices for the U.S. military and private industry tells Salon that he believes the bulge is indeed a transceiver designed to receive electronic signals and transmit them to a hidden earpiece lodged in Bush's ear canal.

"There's no question about it. It's a pretty obvious one -- larger than most because it probably has descrambling capability," said Alex Darbut, technical and business development vice president for Resistance Technology in Arden Hills, Minn. Darbut examined photographs of the president's back taken from the Fox News video feed at the first presidential debate in Coral Gables, Fla., as well as 2002 photos of the president driving and working in a T-shirt on his Crawford ranch, which were posted on the White House Web site.

Darbut speculates that the device the president wears is provided by the Secret Service, noting, "They're not going to have him driving around the countryside on his ranch without being in instant contact with him."

No one in the White House or Bush campaign, however, has offered such an explanation. In fact, the Bush camp has shed little light on the mysterious protuberance, turning aside questions with dismissive humor or rising tones of exasperation. The president is "a regular guy," White House chief of staff Andy Card told Salon before the second debate last week. "Maybe his suit had a little lump in it or something." Campaign spokeswoman Nicolle Devenish took the same line with the New York Times on Saturday: "It was most likely a rumpling of that portion of his suit jacket, or a wrinkle in the fabric." But Devenish, the Times dryly noted, "could not say why the 'rumpling' was rectangular." Campaign spokesman Scott Stanzel brushed aside a questioner in a Washington Post chat session by saying, "I think you've been spending a little too much time on conspiracy Web sites."

On Tuesday, in response to repeated questions from Salon, the Bush camp finally issued a flat denial. Campaign spokesman Reed Dickens denied that Bush has ever used an electronic device to aid his public speaking, insisting the president was wearing "nothing during the debates." When asked about the pictures taken at the Bush ranch, Dickens said the president has never used any devices except for cutting tools and earplugs to protect his ears from the high-decibel chainsaw. Nor has the Secret Service outfitted Bush with a hidden communications device, according to Dickens: "He doesn't need something like that because the Secret Service is always with him. They ride in the truck in the back. Wherever he goes, they're with him."

Despite the official denials, the bulge brouhaha is still ballooning. On Tuesday, the New York Daily News produced a master tailor named Frank Shattuck who, after viewing photos from both debates, confirmed, "There's definitely something there, in between the shoulder blades. I can't say what it is, but it's not hidden very well. They should have come to me. I can hide a pistol under the breast."

In Orlando, Florida, TV station WFTV polled its viewers, asking, Do you believe the accusations that President George W. Bush was wired during the presidential debate? Of 35,000 respondents, only 42 percent answered no, while 36 percent replied yes, and 22 percent said possibly.

Meanwhile, blogs, chat rooms, bulletin boards -- and Salon's letters pages -- continue to buzz with discussion about Bush's possible electronic enhancement. Reports are flying around the Web about earlier televised events where audio glitches allegedly permitted TV viewers to hear someone directing what Bush to say, including his public remarks at the Sea Island G-8 summit meeting in June, his D-day anniversary speech in France, and a New York speech following 9/11.

One thing is certain: During the final presidential debate in Tempe, Ariz., on Wednesday night, all eyes will be on Bush's back.