Democratic Red Sox fans are asked which they'd choose: A World Series or a Kerry White House. The question gives them nightmares. 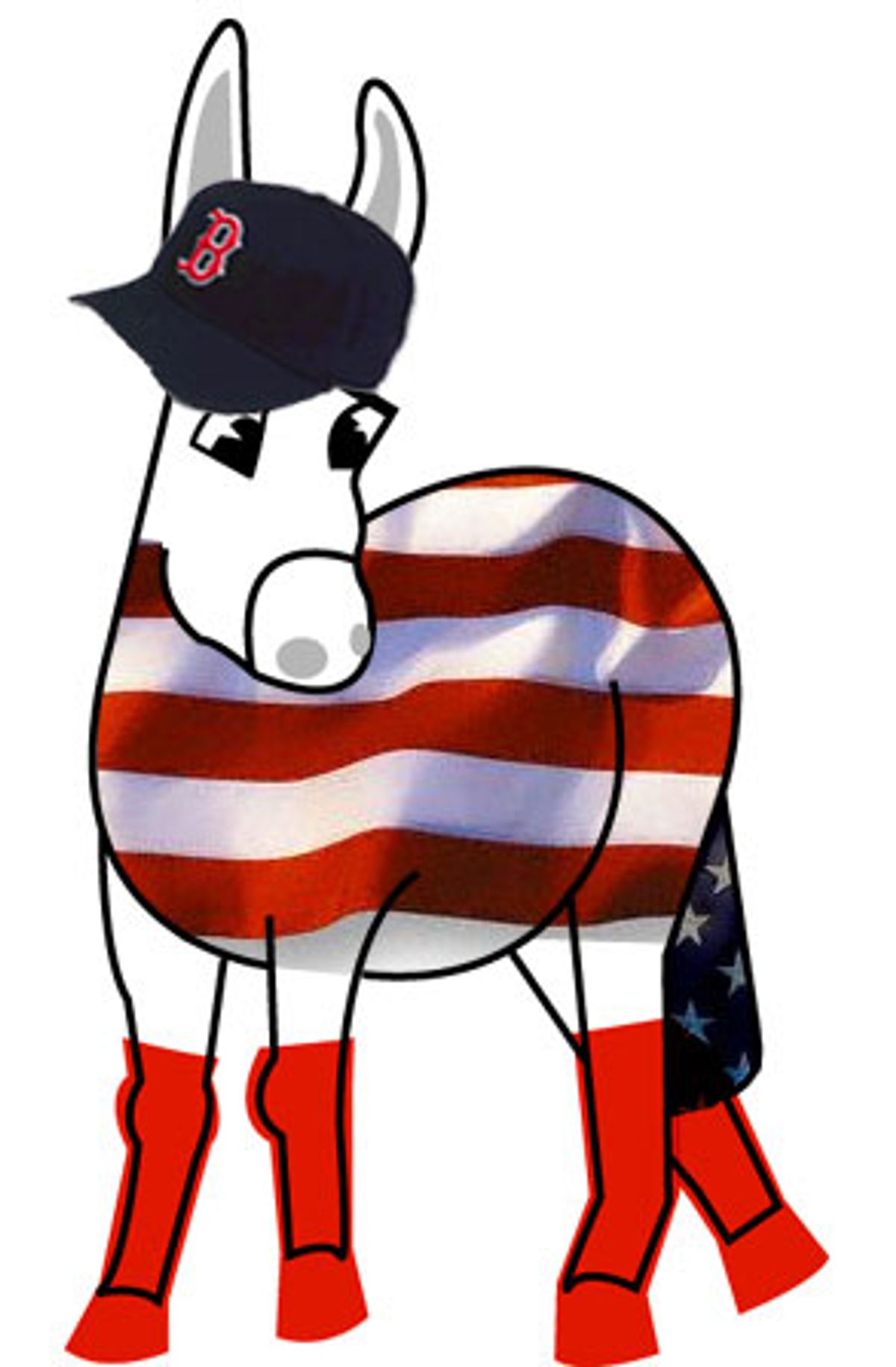 The cool October nights aren't providing much relief for those sweating through the anxieties of the season. Just before we hit the sack, we are pummeled by presidential debates, recent polling numbers, the Yankees-Red Sox playoff games.

To those already sneering at the comparative psychological tolls of a presidential election and a game played by grown men with sticks, I say: You have never been baseball fans, never known the gnarled poses of supplication. Defeat. Despair.

Yes, the upcoming election may be the most important of our lifetime. Civil rights, the planet's resources, America's place in the world, and thousands of lives hang in the balance. But the Red Sox have not won a World Series since 1918. Not long after that, they sold Babe Ruth to the Yankees and have been paying the accursed price in flameout losses to them ever since.

The final lap of a major election, like the hours before a baseball game, comes down to blind, zinging hope that too often gets bludgeoned till it's dead. This binds the nausea of baseball fandom to the queasiness of political investment; on game days and Election Day, those who care wake up with butterflies, knowing by day's end (depending on Florida) some higher power will have etched another hatch mark in their personal win/loss columns.

So with that in mind, we called up those at the crux of the thing: dedicated Democratic Red Sox fans. In the spirit of the metaphysical deals we strike -- "I will not have another sip of this beer if we get out of this inning," "I will never complain about my in-laws again if they vote for Kerry in Cleveland" -- we asked them to make a choice. If this year they were allowed only one victory -- a Red Sox World Series or a John Kerry presidency -- which would it be?

"Oh God, you can't do this to me," was the first response of director Ken Burns ("Baseball," "The Civil War"), and he was not alone. There was a lot of moaning and groaning, mostly because, as several respondents admitted, exactly this type of Faustian proposition had already crossed their minds, and none relished the idea of addressing it.

"For a dyed-in-the-wool Democrat and a Red Sox fan since 1938 at the age of 4 and a half, that is an impossible choice," said Michael Dukakis, the 1988 Democratic presidential candidate and now a Northeastern political science professor, via e-mail. "I want them both to win, and I believe they will."

Presidential historian and baseball memoirist Doris Kearns Goodwin took a night -- the night of Game 1, which New York won 10-7 -- to consider the question. Because she is a television political commentator, she weighed the impact of a Red Sox victory against the impact of a presidential election, without specific reference to John Kerry. "From the moment I'm fully awake until the end of the day, I know the choice of president is more important than a Red Sox victory," she said. Goodwin's son, a Harvard graduate, joined the Army after Sept. 11, spent a year in Baghdad, and is now in Germany; he still has 15 months to serve. But, she continued, "I would suspect if the question were asked me when I first woke up in the morning or was falling asleep at night, when I'm guided by my unconscious rather than my reason, I would say that the Red Sox victory was primary. It's that moment, before you come into full consciousness..." Goodwin trailed off and then laughed. "I have dreamed for so many years about what it would be like to wake up in the morning and know we had won the World Series."

Once he'd regained his composure, Burns also chose the election. "I care most about my Republic," he said, "though the Red Sox are a passion. I woke up at 2:30 this morning, so depressed." When I told him that Goodwin too had connected the restlessness of baseball despair to the groggy divide between sleep and wakefulness, he said, "Yes, it is the waking thought. The waking moment goes to [the Red Sox]."

Burns continued, "It's interesting that you ask this question, Somehow I knew you were going to ... When I woke up at 2:30 there was just this pit in my stomach about baseball, and then I began to worry about the election as well, so they are clearly completely intertwined in my unconscious." But he maintained that rationally, there should be no comparison. "Baseball is a psychic release valve. To worry about the Red Sox is to have a healthy response to the terror of the moment, and I don't mean terrorism, I mean the terror of being alive. None of us are getting out of this alive. But sports and the continuity they represent help to mitigate impending doom. Politics is our attempt in our still-functioning democracy to actually affect the course of human events with political action. One has an abstract palliative nature; the other is a direct correlative to how we live and breathe and continue. So in the end I have to choose the political one, while my heart is all about the metaphoric one."

New Yorker writer Roger Angell was considerably brighter. "Well, I'm more of a Yankee fan these days, but Kerry really needs to win so I guess that's your answer," he wrote in an e-mail.

And through his representative, Boston author Dennis Lehane ("Mystic River") sent this response: "Unlike Fortunate Son, when Derek Jeter was drafted, he actually showed up at Yankee Stadium for duty and honored his whole contract, so I've got nothing against him (except for that scowling-ferret thing he does when he steps up to bat). Also the Yankees only screw Boston, not the whole country. So I'd take Kerry winning the Presidency any day."

And Democratic political consultant Jen Bluestein responded to my query with an immediate, "That's easy." "In my life, I have known Kerry to win, even, to be more precise, known him to be a good closer -- to keep me guessing right up until the last minute and then make it happen," said Bluestein, a Massachusetts native who lives in Brooklyn. "I have never had this experience with the Red Sox in my lifetime. So it's easier for me to give up the possibility of a Sox win this year in the hopes of having a Kerry presidency, because a Kerry victory seems possible, while a Red Sox victory is historically improbable, despite my prayers."