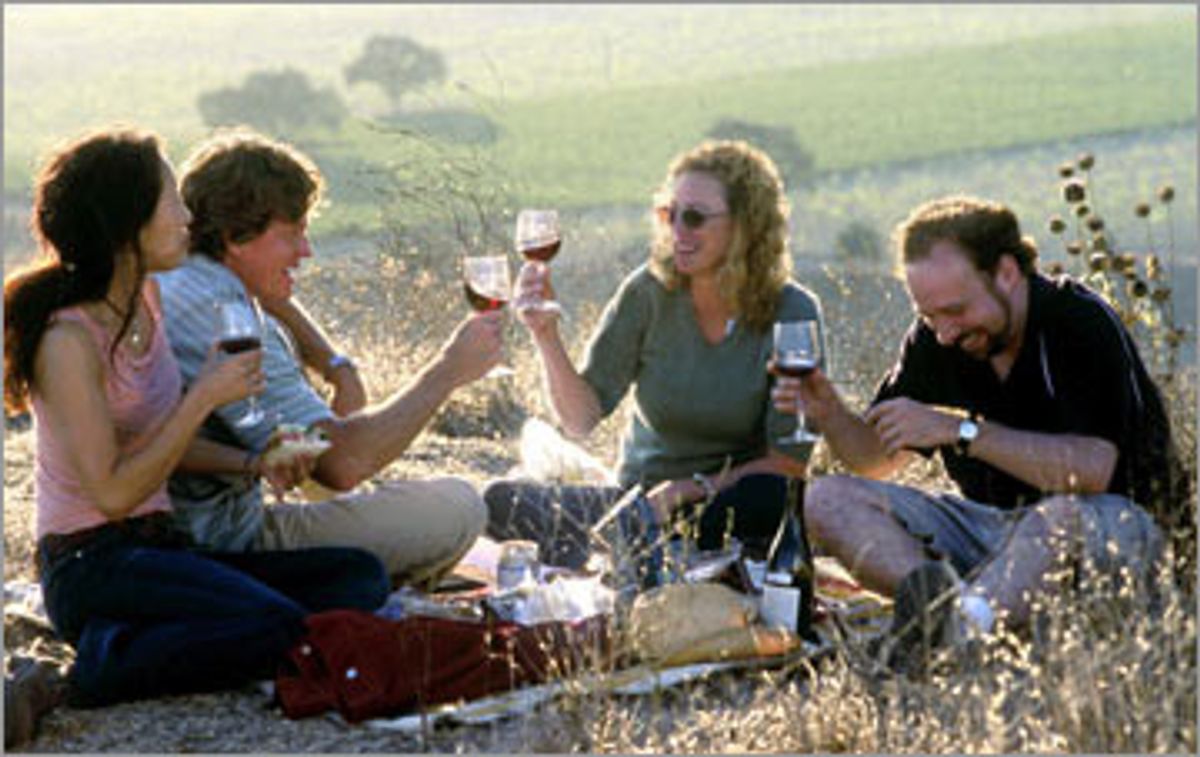 Alexander Payne's new movie, "Sideways," makes you feel like you're trapped at dinner with a wiseass who's trying to convince you what a sensitive guy he is. The film, which opens theatrically next Wednesday after closing this year's New York Film Festival, isn't as overtly contemptuous of the people on-screen as was Payne's last movie, "About Schmidt." I'm sure that Payne even believes he's showing them compassion. But except for a few of Paul Giamatti's moments -- and everything Virginia Madsen and Sandra Oh do -- "Sideways" consists of Payne scoring points off his characters.

Payne has hit on a foolproof method for getting away with his cheap shots: He disguises them in the sheep's clothing of "observational" comedy. "Sideways" isn't a bash. It's not loud or raucous, and since it appears to be about something -- how people who've been bruised choose not to give up -- it can fool audiences into thinking it's an adult comedy. That's how Payne gets away with his juvenile superiority -- and even the fat-girls-like-it-up-the-ass jokes that would be called raunchy and gross (as they are) if they appeared in a teen comedy. Payne has such an adolescent fixation on what is and isn't phony that the movies may at last have found the filmmaker capable of bringing J.D. Salinger to the screen (that isn't a compliment).

The chief phony here is Paul Giamatti's Miles, a junior high English teacher and aspiring novelist whose only confidence in life comes from his knowledge of wines. He can go on and on about his disdain for cabernet, or why pinot noir is a white wine, but let him give the smallest description of his novel -- he calls it an autobiographical account of his father's stroke that devolves into a Robbe-Grillet mystery -- and you know the thing will never be published. Miles' best friend, Jack (Thomas Haden Church), is a self-absorbed actor (is there any other kind in comedy? Couldn't someone write an actor as a decent person for a change?) whose career has gone from soap opera to commercial voice-overs. Jack is about to get married, and Miles, his best man, plans a farewell-to-bachelorhood trip for the two of them through California's wine country.

Jack makes it clear early on that he intends to use the trip to sow his last wild oats and settles on Stephanie (Sandra Oh), whom he meets in one of the vineyards he and Miles visit. Miles feels understandably scummy being party to his friend's deception (Jack isn't deceiving just his fiancée but also Stephanie, telling her he's in love with her), but he's too traumatized by his divorce to even consider getting lucky himself, even though Maya (Virginia Madsen), a waitress at one of Miles' favorite restaurants, clearly likes him.

Some of the details in "Sideways" verge on the painfully accurate, from Miles' cramped and cluttered divorced-guy's apartment to the stilted small talk he makes with Jack's prospective in-laws to the stilted small talk he makes on a date with Maya. Miles is more embarrassing when he tries to be a regular guy than when he's showing off his wine knowledge. But Payne and his writing partner, Jim Taylor, who adapted the film from Rex Pickett's novel, hold themselves at a distance from Miles and Jack. And there isn't any pleasure to be had in watching people whom you haven't been made to care about making fools of themselves.

The film needs more moments like the silly, enjoyable scene where Miles and Jack go after a cranky old golfer giving them trouble on the fairway. For a few seconds, the movie cuts loose and Payne embraces the childishness of his characters, gives them some free comic rein. But Payne's schematic approach particularly hinders Church's performance, which depends on our finding Jack's lantern-jawed horniness incorrigibly funny.

Payne's directorial style holds everything in finicky check. Whether that's because it's easier to make fun of these middle-aged failures (as it was to make fun of the elderly failure Jack Nicholson played in "About Schmidt" or the young failure Matthew Broderick played in "Election") than to explore what he might share with them, who knows? But as a filmmaker Payne is awfully pleased with himself. His method is a mixture of smugness and the sort of "good taste" that kills comedy.

Payne and Taylor's script is full of flossy motifs about wine as a metaphor for life. Miles, the eternally disappointed fussbudget, likes pinot which, as he declaims in a speech, is difficult to nurture and sustain; unless all the variables go just right, it's a disappointment. If that doesn't strike you as a precious conceit, or if you don't feel you're being played watching Miles alone and miserable in a fast-food joint guzzling the rare vintage he's been saving for a special occasion, then "Sideways" might be for you.

But there's something depressing about the work of Alexander Payne being held up as one of the bright spots in contemporary American movie comedy. Payne seems uncomfortable with the casual nature of American movie comedy, with the empathy that, in pictures like Preston Sturges' great comedies, has made us feel like kin to the native eccentrics, screw-ups and fantasists on display. Payne combines the worst of late Eric Rohmer with the worst of early David Letterman -- he's a rarefied wiseguy. And his depressive side seems to convince people that he's serious.

Like "About Schmidt," "Sideways" is visually dreary and smeary. Phedon Papamichael has shot the California wine country as if it were just as washed-out as the strip malls and suburban tracts in that film.

Payne's attitude toward his characters is similar to the belief some of us had as kids that touching a person with a deformity will make it rub off on us. Making jokes about their sad lives and baseless ambitions is what passes for understanding with Payne. He doesn't bother to hide his disgust when he uses the sight of a fat waitress and her trucker husband's nude, out-of-shape bodies and pigsty of a home for laughs. They're no-hopers, so he doesn't have to pretend to feel anything for them.

Given that Paul Giamatti has made a career out of making us care about the characters we might have dismissed as losers, Payne is exactly the wrong director for him to work with. Giamatti burrows inside his characters, puts us inside their pudgy, sweaty, nervous skins. Scene by scene, what he does here is fine, but Payne's sensibility stunts him, puts his work in an unflattering context.

Payne, however, can't touch Virginia Madsen and Sandra Oh. Oh brought a welcome deadpan tartness to last year's single-gal travelogue "Under the Tuscan Sun." Here she's got the kind of flirty, sassy presence that movie audiences have loved in generations of independent, capable, smart-talking women. And Madsen is spectacular.

In her first movie appearances, when she was in her 20s, Madsen seemed a pretty, empty shell. Now, at 41, she seems to have gained confidence in her acting -- and perhaps in herself -- and is not only more attractive than ever but also comes across as completely real. Madsen has perhaps the movie's worst speech -- Payne and Taylor's most extended wine-as-life metaphor -- and she manages to make it sound not like the screenwriters' affectation but the way Maya actually thinks and talks.

Madsen shows up what's phony about "Sideways." She suggests experience where Payne suggests a set of adopted attitudes. It's a measure of how badly Payne misjudges "Sideways" that both Madsen and Oh drop out of the movie about three-quarters of the way through it. Did he honestly think that his two child-men were enough to hold our attention, or did he suddenly apprehend that the two women shame the movie they're in every second they're on-screen?