Dick and Lynne Cheney screamed foul when the Democratic candidate mentioned their gay daughter. But for gays and lesbians, what is most outrageous is the Cheneys' outrage. 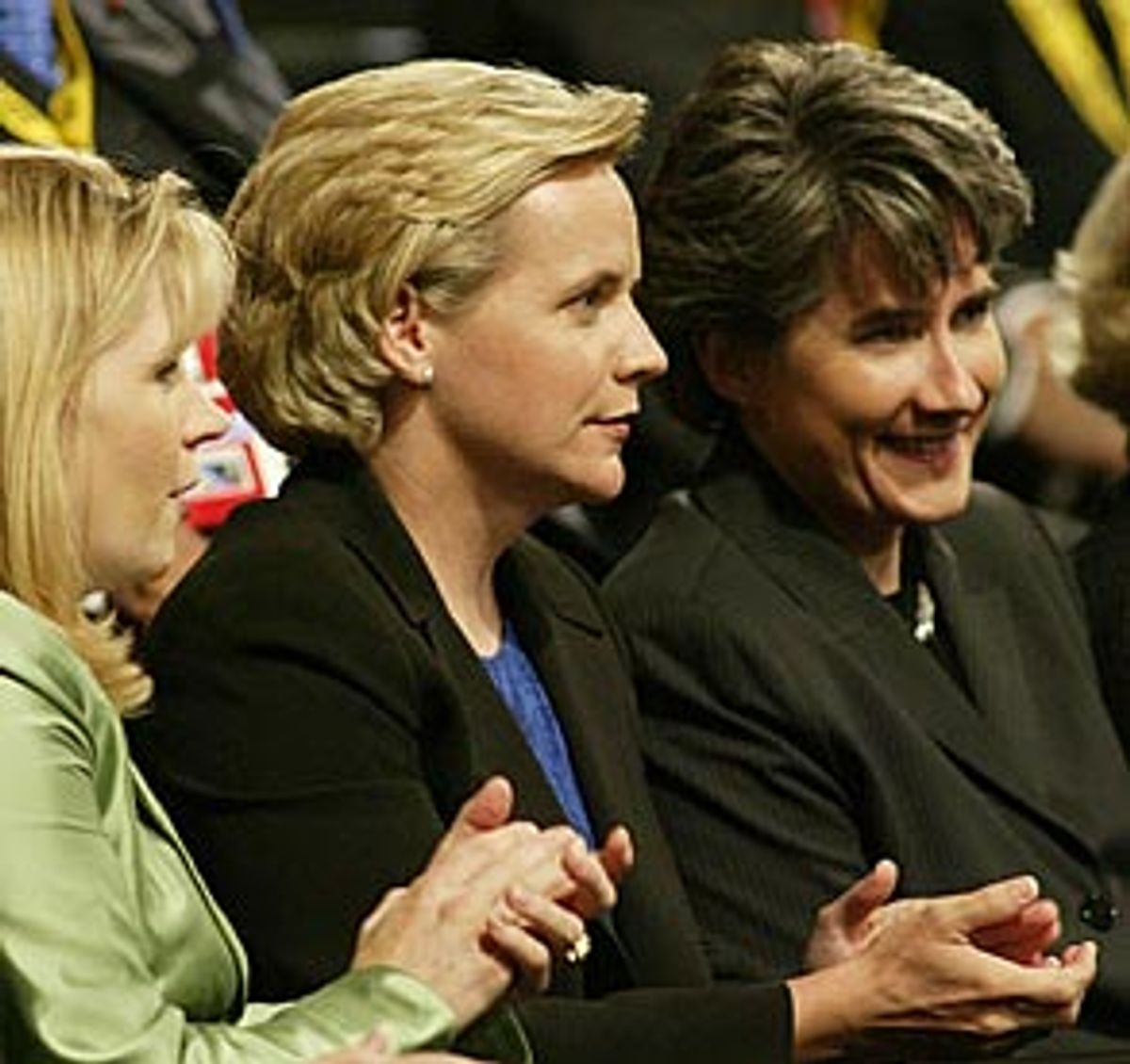 America's most notorious lesbian is back.

In the final presidential debate, John Kerry responded to a gay-rights question with a reference to Vice President Dick Cheney's gay daughter. The vice president's wife, Lynne Cheney, immediately went ballistic, condemning Kerry in her most moralistic tones as "not a good man" for the "cheap and tawdry political trick." By Thursday morning, it was all over the news networks, with the vice president also impugning Kerry's character and describing himself as "a pretty angry father." CNN's Wolf Blitzer gravely speculated that the controversy could dominate the entire post-debate landscape. Well, yeah, if the Cheneys -- supposedly outraged by the violation of their daughter's privacy -- get their way and keep the issue burning brightly in the public eye.

How incredibly sad for Mary Cheney, the lesbian in question. And not for the reasons that her parents and the pundits have been screaming about.

First, let's dispense with the comic aspects of the parental indignation:

Maybe Dick's indignation began later that night watching "The Daily Show." Jon Stewart poked fun at Edwards for opportunistically screaming GAY DAUGHTER! GAY DAUGHTER! to any homophobe out there who still hadn't heard about it.

It didn't go much further, but twice in one week was apparently too much -- for the Cheneys and for the media. The conservative cable clones began piling on. Even some liberals have been squeamish about the Democrats invoking Mary's lesbianism so shamelessly.

But they just don't get it. Much of the gay population is incensed. At the media.

Let's get one thing straight. It is not an insult to call a proudly public lesbian a lesbian. It's an insult to gasp when someone calls her a lesbian. That's how all the gays I have spoken to the past 24 hours perceived the press response. You're embarrassed for us. And it's infuriating.

Consider the way a paraplegic or a blind person feels when you act just a little too sympathetic about their "plight." We don't want your pity! Can you see how insulting it is?

The only thing offensive about Kerry's statement to us gay people was that he had to pause mid-sentence and gulp and sputter the terrifying word out: "Dick Cheney's daughter, who is ... a lesbian ..."

It's not a dirty word, John. And why is the press reacting like he exposed a breast?

The most outlandish exchange I've seen came in a scholarly Fox News debate Thursday -- seriously, it happens -- over the candidates' linguistic styles, of all things. The conservative guy, Eric Dezenhall, charged that "the invocation of Vice President Cheney's daughter's lesbianism was sort of a radioactive concept. The words lesbian in a presidential debate -- even if you don't mean it to be mean -- came across as off the grid, and very, very shrill."

Is he serious? If it's innocent little gay people you think you're protecting here, listen up! Gay people do not consider the invocation of our existence radioactive. It's the comparisons to plutonium that drive us nuts. We are not toxic.

A gay reader e-mailed to lament that, "I've heard my own mom say that she wished there was a 'nicer' word" than "lesbian."

At least he didn't have Lynne Cheney for a mom.

Her response was truly deplorable. If Mary Cheney is distraught this morning, it's likely her mother is the cause. And it's perplexing to millions of gay Americans today why the press has not grasped how horrible she acted toward Mary Wednesday night.

Maybe it's understandable. Most of you out there have never been a homo. Let me share a personal story to illustrate how this works for a gay person. I came out to my parents when I was in my 30s -- they were shocked, then understanding, but also a little queasy about it. The queasiness was much less about them accepting me as it was their friends accepting them.

That's the part that stings. No matter how old you get.

What rips your heart out is when someone close to you denies your sexuality in public. Or shudders at the mention of it, so you can see how desperately they want to.

It may sound like a subtle implication to a straight person -- clearly it does; even the most liberal straight pundits appear oblivious to it -- but a gay person hears it scream out loud and clear. You people still feel there's something to be ashamed of here.

One of the happiest days of my life came when one of the old ladies at my mom's Catholic bridge club mentioned what a nice young husband I'd make. My mother, in her 60s by then, laughed it off. "I don't think that's going to happen," she said. "He's gay."

I was stunned when I heard the story. It had taken her years to get to that point. And it meant everything to me. She didn't care what the bridge ladies thought. She cared more about me.

I doubt very much that Mary Cheney gives a rat's ass if some church lady in Idaho knows she's gay. But her mother cringing at the church lady knowing -- that's gotta hurt like hell.