This documentary sequel to David O. Russell's "Three Kings" was dropped when Warner Bros. refused to distribute it, but you can still see it -- and you should. 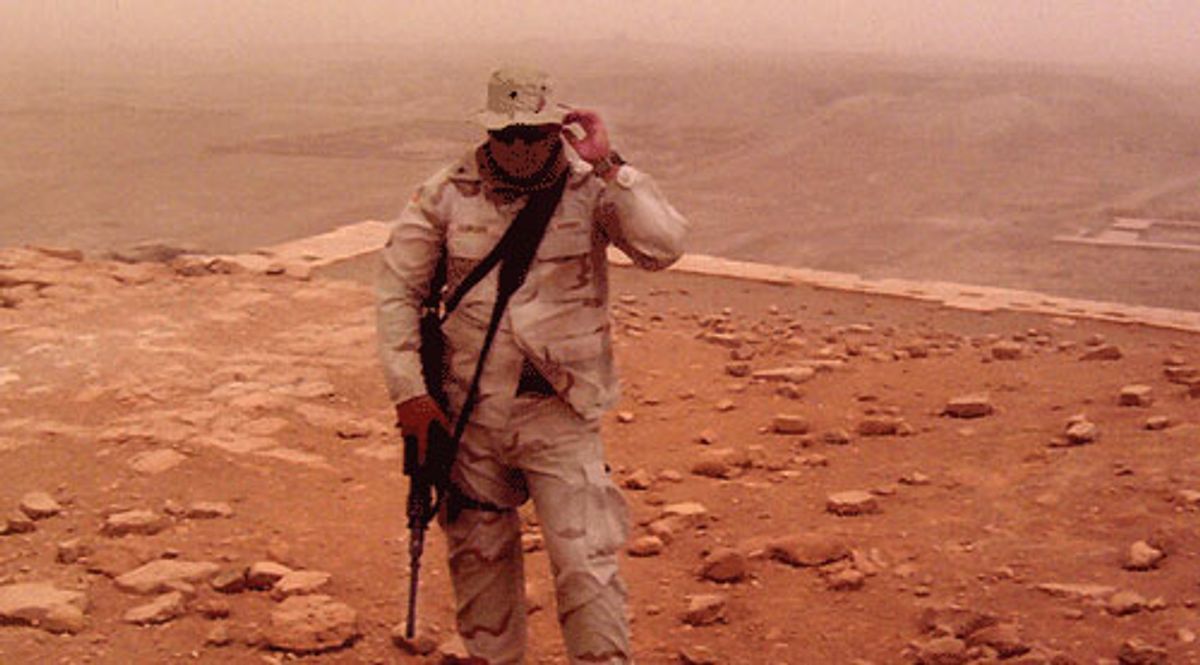 There's next to no visual imagination in David O. Russell's "Soldiers Pay," which patches together a series of interviews with veterans of the current Iraq war and various of the war's civilian defenders and attackers. There's also little attention to composition and no narrative playfulness, all of which make this 35-minute documentary seem like an abandonment of everything Russell is known for.

On another level, though, "Soldiers Pay" is a profoundly revealing document. Not so much because it offers a low-key indictment of the confused, chaotic and mismanaged Iraq conflict; no viewer of Russell's epoch-making Gulf War I comedy "Three Kings" will be surprised to learn that his views are antiwar in general and anti-Bush in particular. Rather, this film feels like a confession of sorts, an insistence that when the chips are down content trumps form and the medium is not -- at least not entirely -- the message.

"Soldiers Pay" briefly became the subject of news stories after Warner Bros., displaying that combination of moral courage and sound financial judgment unique to Hollywood studios, first gave Russell $200,000 to make a war documentary and then declined to distribute it (as part of a rerelease of "Three Kings," long planned to follow the opening of Russell's latest movie, "I Heart Huckabees"). It's hard to imagine what the company expected -- a salute to Our Troops with music by Clint Black? -- but the final product, which in fact draws no political conclusions and is about as rigorously balanced as such things get, was apparently not found pleasing. So "Soldiers Pay" was returned to Russell and you can now see it (in a half-dozen or so major cities) as the curtain-raiser for Robert Greenwald's devastating "Uncovered: The War in Iraq," which is, peculiarly, reaching theaters (in an extended form) almost 11 months after premiering on DVD. (It will now be rereleased on DVD, paired with "Soldier's Pay.")

This isn't a scientific analysis, but it seems as if more film and video footage, and more prose, has been devoted to the cause of defeating George W. Bush than has ever been expended, pro or con, on any other presidential candidate in the history of American politics. Maybe the right started this by building an entire hysterical publishing empire around Bill Clinton, who was apparently guilty of every imaginable crime up to and including the personal delivery of Pearl Harbor maps to Adm. Yamamoto. But it's the American left, pinioned between an amorphous and inscrutable populace and the soul-deadening institutional caution of the Democratic Party, that has found its Bush-era outlet by cranking out movies and books by the fistful. Whether these have had any practical effect is unknowable, but at the very least they should provide historians of the future -- if there is any more history, or any future -- with a treasure trove.

"Soldiers Pay" is not among the most memorable works in this genre, but its deliberate lack of artifice and its stitched-together quality possess an undeniable power. Russell and his younger co-directors, Tricia Regan and Juan Carlos Zaldívar, create no illusion of seamlessness: Sometimes you can hear the filmmakers' questions to the interviewees, sometimes you can't. "Mistake" shots, in which the subject is so severely backlit you can't see his face, are left in. (No one in the film is anonymous, so this wasn't deliberate.) Sound values are sometimes too loud (or "bright," in engineering terms) and sometimes too quiet.

The point of all this, as I read it, is to draw us closer to the young soldiers who tell their stories to Russell and his collaborators, and then to suggest that these true stories of real war are every bit as surreal as the Mephistophelean comic vision of "Three Kings." The protagonist of "Soldiers Pay," if you want to put it that way, is a former supply sergeant from the 3rd Infantry Division named Matt Novak, who was involved in a real-life incident that oddly echoed the plot of Russell's earlier film.

Handsome in a faintly disreputable way -- he looks like the kind of small-town guy who dropped out of high school but has read some surprising books and knows where to find Jamaican weed -- Novak is definitely a movie character in the making (perhaps to be played by Billy Zane or Jake Gyllenhaal). The filmmakers shoot him entirely in his bedroom, where he reclines to tell the tale of how he and several other soldiers came across a mysterious cache of cash in Baghdad that amounted, he says, to several hundred million dollars. As seductive as this tale is, Russell means it to be illustrative of a larger equation -- which is that the entire war was philosophically incoherent and incompetently managed, and the ordinary guys who did the fighting wound up being blamed for that.

If the film's most compelling antiwar voices are New York Observer columnist Nicholas Von Hoffman (who has a son serving in Iraq) and retired Marine Corps Maj. Gen. J. Michael Myatt, who visibly chokes up when talking about the Marines who died under his orders, Russell does not avoid the complexities of the Iraq conundrum.

His principal pro-war spokesman is Rep. David Dreier, the quasi-outed California congressman who's slicker than frozen Brylcreem. But there are also two of Russell's "Three Kings" actors, Kurdish Iraqi immigrants who now run a convenience store in the United States, who invite antiwar activists to live a month under Saddam Hussein and then report back on how they feel. Right there in front of the rack of Newports and Winstons, one of them talks about his arrest as an Iraqi student activist, after which he was hung from a ceiling fan, stripped naked and whipped with electrical cords.

In fact, the most surprising thing about "Soldiers Pay," for all its clutter and inelegance, is that it refuses to simplify or seek easy answers to a situation that offers none. More than any other work on the Iraq war, including "Fahrenheit 9/11" (which I enjoyed tremendously) and "Uncovered," this film captures the sense that the U.S. has wandered down a dark alley and now finds itself with no way out. As one antiwar activist observes in the film, Iraq is almost certainly better off without Saddam Hussein. But the world is worse off because of the half-buffoonish, half-tragic war that toppled him.