Would you drink this water?

NEWater looks like any other glacier-clear bottled H20. Except it gushes from the toilets of Singapore instead of a bubbling spring. 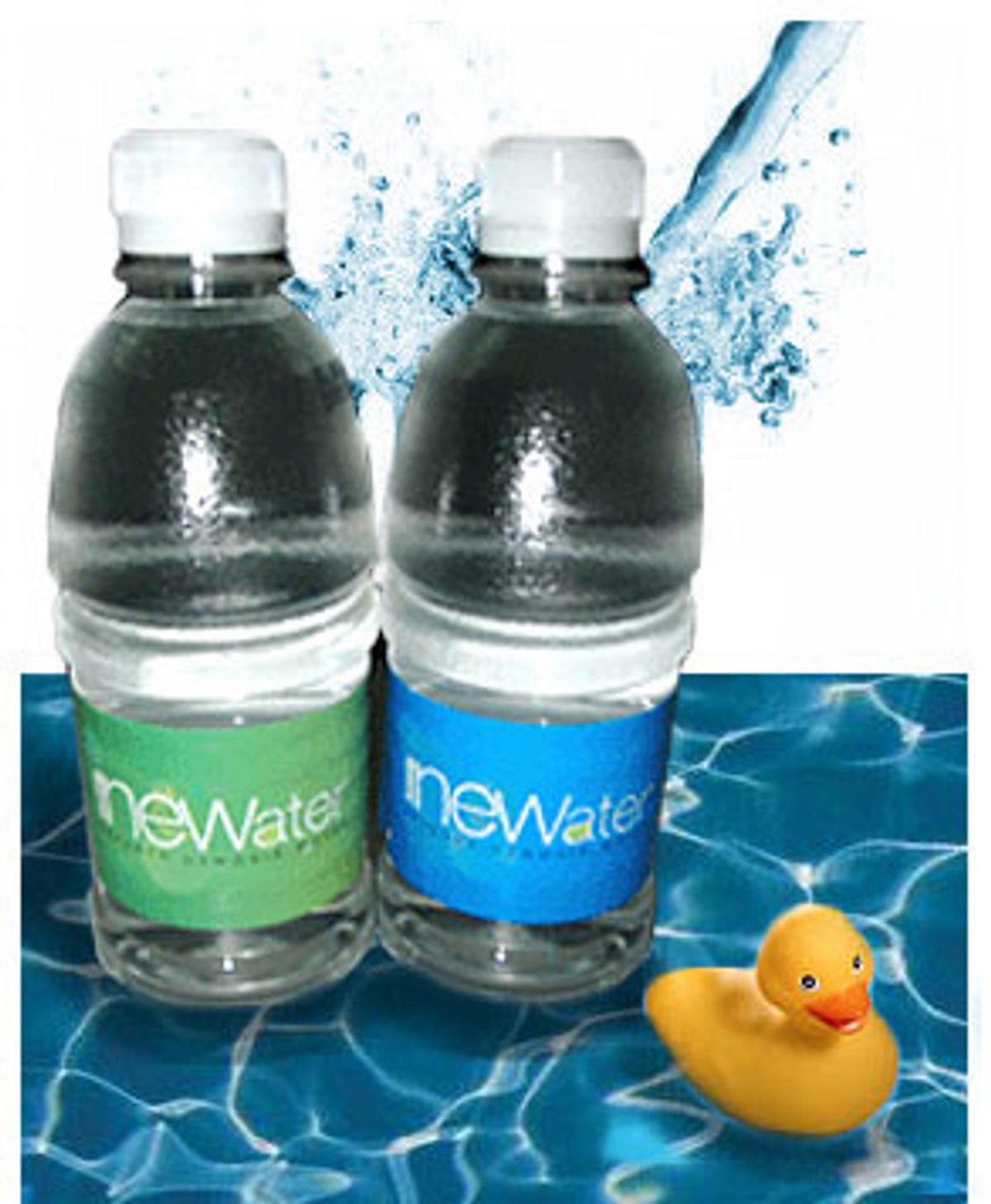 The promotional bottle for Singapore's NEWater looks like any other bottled water, right down to its snappy name and bright label. And it tastes the same as other premium bottled-water brands -- maybe even better, if you prefer the metallic edge of Evian to the airy sweetness of Poland Springs. But while NEWater is transparent, its story is not, and it's frankly not terribly appetizing.

NEWater is the product of Singapore's new water-treatment system, and it is wastewater that has been purified through advanced synthetic membranes called ZeeWeed. That's right: The crystal-clear NEWater that gushes through the country's faucets isn't gurgling from a mountain spring. Most recently, it was flushed from a toilet.

The water is first treated in a traditional water plant before going through a three-stage purification that uses high-quality ZeeWeed membranes, which filter out even the most microscopic bacteria. By the time it's processed, NEWater meets all the drinking-water standards specified by the U.S. Environmental Protection Agency and the World Health Organization.

Don't panic. There is no plan to bring NEWater -- or anything like it -- to the United States anytime soon. "It's unacceptable to [U.S.] consumers to drink their own waste stream," acknowledges Ashok Gadgil, an Indian-born environmental physicist who works at the Lawrence Berkeley National Laboratory (though he quickly points out that astronauts use the technology in long-term outer-space trips).

The great promise is that this and other new technologies can, in some way, help solve an increasingly dire global water crisis. Nearly 20 percent of the world (1.2 billion people) does not have easy access to clean water -- 400 children die every hour from water-borne causes, according to Gadgil. And even in developed countries like the United States, fear of tainted water is on the rise -- and not just the non-kosher copepods that sneaked through New York's filtration system this summer, worrying Orthodox Jews.

In the United States, sand filtration systems have traditionally been used to remove particles and sediment from our surface water, which is then treated with chemicals like chlorine. But some strains of bacteria, including Cryptosporidium, have started to develop immunity to chlorine. In 1993, the microscopic "crypto" parasites spread through the municipal water systems of southeastern Wisconsin, causing an outbreak of a flulike disease that affected more than 400,000 people and killed approximately 100. While the outbreak has been linked to the inadequate treatment of drinking water taken from Lake Michigan, no specific source of the Cryptosporidium was ever identified. The Centers for Disease Control and Prevention says that in the past 20 years, crypto has become recognized as one of the most common causes of waterborne disease within humans in the United States.

While the CDC assures us that the American drinking-water supply is normally safe, and that it has been taking precautions to handle outbreaks like the one in Wisconsin, it issues a reminder on its Web site that disease that spreads through water is still a very real problem. Crypto may be found in drinking water and recreational water in every region of the United States and throughout the world.

Membrane technology may also help the United States protect itself from terrorist attacks on the nation's water supply. Some membranes could act as a reliable barrier to contaminants such as sarin and anthrax. However, membranes can screen only water that goes into the treatment plant. Once it leaves the plant on its way to individual homes, water again becomes vulnerable, which is why government researchers stress that a viable water-security strategy must consist of two parts: treatment and monitoring.

ZeeWeed -- the illustrious membrane that processes NEWater -- is just one of the successful new technologies used to purify water of bacteria. But it's so captivating a product that it is developing a cultlike devotion among futurists and sustainability nuts. A proprietary technology from the Canadian company Zenon Environmental, it's even made its way into an art museum. Designer Bruce Mau, the curator of "Massive Change," a show about the future of design at the Vancouver Art Gallery, features ZeeWeed membranes and NEWater as two examples of the thousands of ways that design is radically changing the way we approach life on earth.

Mau mentions the ZeeWeed name with the same reverence with which other designers might talk about the flat-screen TV or the Toyota Prius. He is one of the few North Americans who has sipped NEWater.

"It really doesn't taste like much, except for maybe like particularly pure spring water," he says. "I think they even have to add back in some of the 'water' taste."

ZeeWeed consists of plastic fibers in the shape of thin tubes with billions of microspores. When a little suction is applied to the top of each tube, the resulting action is similar to sucking water out of a straw that's been pinpricked with holes -- except that these holes are small enough to screen out even viruses. Air bubbles at the bottom of the tubes make them sway under water like long, thin stalks of seaweed, which knocks off any debris that may stick to the membranes. Independent tests, including ones conducted by BioVir Laboratories of Benicia, Calif., found that the Zenon filter reduces 99.99999 percent of bacteria and 99.7 percent of viruses.

It is predicted that ZeeWeed membranes (and comparable membranes from competitive companies) will become widespread as additional North American water-treatment plants upgrade to better technologies. The Pennsylvania communities of Lancaster and Charleroi, which use surface water as a drinking-water source, as well as an Ontario city, have each placed orders for $30 million worth of membranes from Zenon. According to Zenon, 440 wastewater and drinking-water treatment plants worldwide (including more than 200 in the U.S.) are already using or are under construction to use Zenon technology. Zenon is also unveiling a high-end product, Homespring, for homeowners bored with their Sub-Zero freezers. Its retail price is around $2,800.

Understandably, these new membranes are prohibitively expensive -- and too complicated -- to keep up in a developing country, which is why a relatively wealthy country like Singapore can experiment with the technology but others have not. And that is why the technology Gadgil created, UV Waterworks, has proven so effective.

A small lightweight unit that disinfects water through ultraviolet light, the Waterworks purifies four gallons of water every minute at an estimated cost of 5 cents for every thousand gallons. One unit is intended for a community of about 2,000 people. Gadgil says more than 300 units are functioning around the world, mostly in developing countries.

Gadgil developed his invention -- and became committed to the cause of pure drinking water -- after a tragic outbreak in 1992 of the "Bengal cholera" in his native India. In one month alone, nearly 10,000 people died from the disease, spread through drinking water. Today, Gadgil says, "science is making substantial advances -- you see more practical applications emerging (like membranes, for example) that are very desirable and very positive. However, there is still a huge gap in terms of socially responsible businesses bringing the latest scientific advances to the bottom of the economic pyramid. Scientists, engineers and researchers still need to work with business entrepreneurs to come up with something that not only solves problems, but is also financially viable."