From the missing munitions to a ballooning war bill, John Kerry seizes on bad news out of Iraq, putting George W. Bush on the defensive. 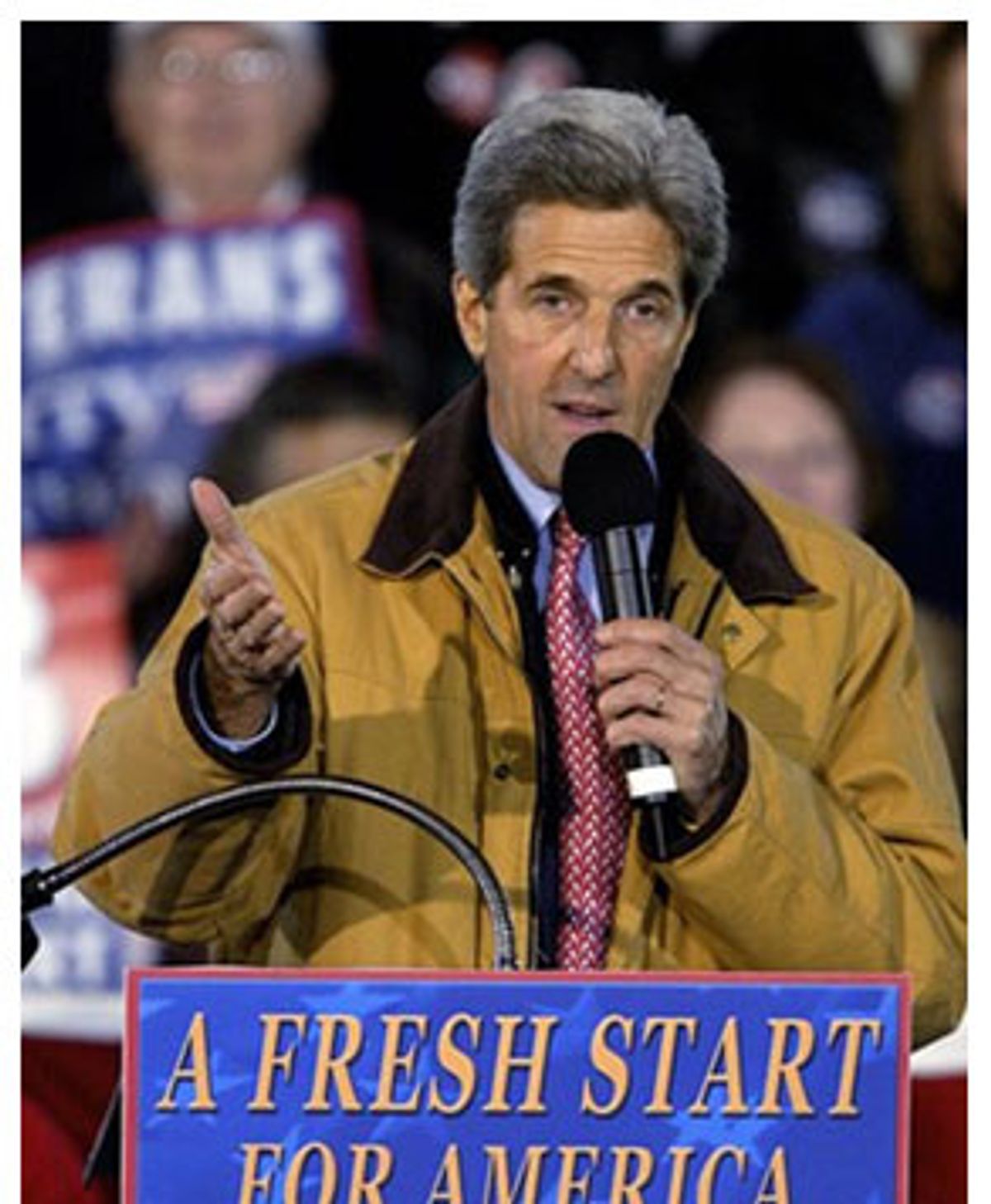 For John Kerry, the report arrived Monday morning like a Christmas gift wrapped in newsprint: The Bush administration, which went to war in Iraq ostensibly to prevent weapons of mass destruction from falling into the hands of terrorists, has apparently allowed 380 tons of conventional weapons to disappear into the dangerous chaos of Iraq. If Kerry's speech here this morning is any indication, the missing munitions will be a gift that keeps on giving.

In an early morning foreign policy address aimed at controlling the day's news cycle, Kerry used the latest bad news from Iraq to underscore his larger point: Bush has consistently made "wrong decisions" that have made America less safe. And, Kerry said, Bush has intentionally tried to hide the truth about his decisions -- and the risks created by them -- until after next Tuesday's election.

"He has stood in front of the American people day after day, telling us how much progress we are making in Iraq and how much safer we are under his leadership, without ever mentioning the loss of these deadly explosives," Kerry said in a speech inside a gymnasium in Green Bay. In exactly the sort of critique Republicans frequently aim at him, Kerry blasted the administration for offering differing explanations for why the weapons got away. But he saved his sharpest words for Bush, who's been silent on the munitions.

"What did the president have to say about the missing explosives? Not a word. Complete silence. Despite devastating evidence that his administration's failure here has put our troops and our citizens in greater danger, George Bush has not offered a single word of explanation," Kerry said. "Mr. President, what else are you being silent about? What else are you keeping from the American people? How much more will the American people have to pay?"

The last question was a reference to another bit of news on which the Kerry campaign has seized: A report that the Bush administration will seek another $70 billion next year for Iraq and Afghanistan, bringing the total cost of the war to nearly $225 billion. Just a few weeks ago, Republicans -- and independent fact-checkers -- took Kerry to task for claiming that the war in Iraq had cost $200 billion already when the amount spent to date was actually lower; with Bush's new request, $200 billion will soon be in the rear-view mirror.

Kerry's critique of Bush's war policies has grown sharper at each campaign stop over the last few days. Monday morning in New Hampshire, Kerry said that Bush "talks tough and brags about making America safer," but that his administration has exhibited an "unbelievable blindness, stubbornness and arrogance" and has "failed to do the basics" in Iraq.

Late Monday in Green Bay, Kerry homed in on the report about the missing munitions. "They're missing, they're unaccounted for, they don't know where they are," Kerry said, his hoarse voice rising with what sure appeared to be indignation. He said the missing explosives may be in the hands of terrorists now. "The very thing we went over there to do -- to prevent weapons of any kind of destruction from falling into the wrong hands -- this president, this administration failed to do. Now our troops are less safe, the American people are less safe, and the president has failed to fulfill the responsibility of the commander in chief."

Bush has known about the missing munitions for weeks, but neither he nor his administration made any public mention of them until The New York Times came calling for its Monday story. Bush himself still has said nothing about the explosives -- and Kerry spokesman Joe Lockhart today demanded Bush break his "completely unacceptable" silence. Meanwhile, Bush's political advisors have flown into defense mode. Bush-Cheney spokesman Steve Schmidt called Kerry's charges on the munitions "baseless," and Karl Rove accused Kerry of "Monday-morning quarterbacking." The Bush-Cheney campaign has dismissed Monday's Times story on the munitions as "false," and seized on an NBC News report to suggest that the munitions might have been gone before U.S. troops arrived at the base shortly after Baghdad fell -- a claim Lockhart called intentionally misleading. And in a conference call this morning, Lockhart said Bush-Cheney's claim that the Times is false is "nearing the point of desperation." The administration "didn't take the time to do what they should have done in Iraq, and now they're running around hurling around ridiculous charges and impugning and distorting the work of journalists," Lockhart said.

Whatever the truth of it, the charge that Bush's war plan may have put the explosives in the hands of Iraqi insurgents or other "enemies" plainly has the White House on the defensive. Terrorism and Iraq are supposed to be Bush's turf in this campaign, and the polls continue to reflect that Bush has an edge over Kerry on those issues. But in debates and on the stump, Kerry is strongest when he prosecutes Bush for his handling of the Iraq war. The polls reflect that, too. Despite the fact that voters say they trust Bush to do a better job in Iraq, they also seem to like Kerry more when he's on the offensive about it. Kerry stopped his summer slide when he amped up his war critique in September, and his dominating performance in the first debate, the one focused exclusively on foreign policy and national security, brought Kerry back into a dead heat with the president. It was the third debate, the one that focused on the domestic policy issues where Kerry is supposed to be stronger, that allowed Bush to stop his own slide.

So it was that on Tuesday morning in Wisconsin, a state that has lost tens of thousands of manufacturing jobs in the last four years, Kerry delivered a speech that focused almost exclusively on the war in Iraq and what he said was the president's lack of candor about it. "When the president is faced with the consequences of his own wrong decisions, he doesn't confront them, he tried to hide from them," Kerry said. "The truth is, the president has never leveled with the American people about why we went to war, how the war is going, or what he is doing to put Iraq on track."

As his comments suggest, Kerry is now questioning publicly, if a little obliquely, whether Bush's stated reasons for going to war were actually the ones that drove his decision. Kerry contrasted the administration's decision to protect oil fields rather than the munitions supplies in Iraq, with the fact that the United States "allegedly" -- and he stressed the word -- went to war to keep weapons of mass destruction from falling into the hands of terrorists.

Kerry will continue to hit Bush on both the war and the economy as he campaigns this week in Nevada, New Mexico, Iowa, Wisconsin, Ohio, Minnesota and Florida. The pivot point in his stump speech -- the moment where he switches from the war to the economy -- has become one of its most important moments. "We need a president who can do two things at the same time," Kerry says. It's a dig at Bush's agenda but also his intellect, and Kerry's crowds love it.

Kerry still has those Kerry moments on the campaign trail, particularly at late-night rallies when his voice grows a little raspy and his exhaustion begins to show. Just before midnight in Green Bay Monday -- a day that began at dawn in New Hampshire -- Kerry stumbled over his words a few times, and his speech lost the blunt crispness that it has in his better hours. But the night seems to bring out something else in Kerry, too -- a rising sense of anger built on disbelief that Bush has handled the war in the way he has. Maybe Kerry always feels that way. Late at night, he actually shows it.

And at all the stops, Kerry is making his charge just a little more personally. Monday night in Green Bay, Kerry turned the knife on Secretary of Defense Donald Rumsfeld, a man whose firing Kerry had advocated for months. After explaining the horrors that 380 tons of explosives could bring, Kerry reminded his supporters of Rumsfeld's infamous "stuff happens" remark from 2003 downplaying post-invasion looting in Iraq. Pantomiming a "whaddya gonna do about it?" shrug, Kerry said of the missing munitions, "Well, looting happens."

It isn't the only imitation Kerry tries on the stump. In his stump speech now, Kerry slumps his lanky frame over the lectern in a spot-on re-creation of the president at the first debate, and he says, over and over again, "It's hard work, it's hard work." He says he's ready, and, in an awkward Kerry embellishment, "impatient," to "relieve the president of that hard work."