The unmaking of the president

Why the incumbent who should have won in a cakewalk is headed for defeat next week. 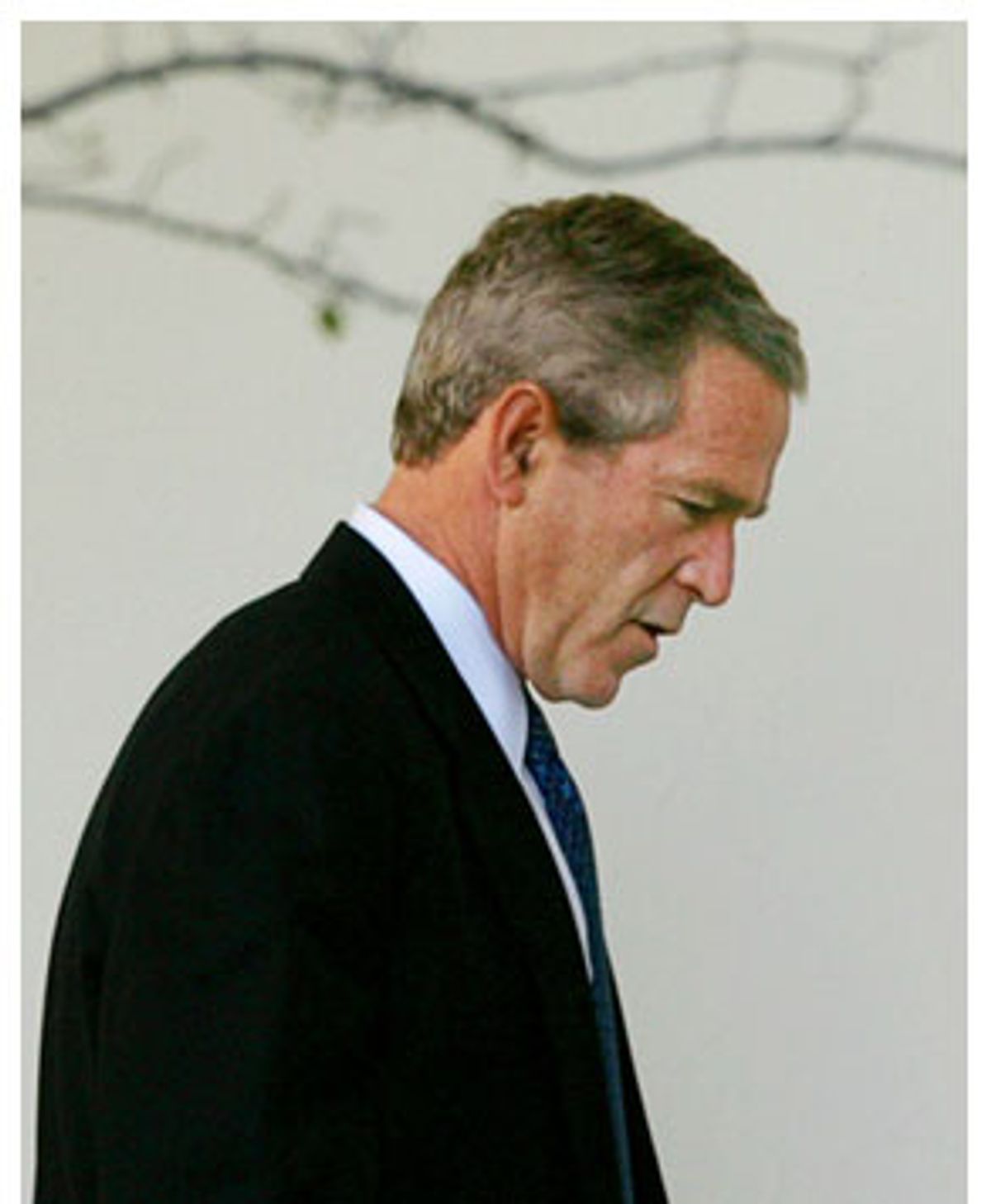 The unmaking of the president 2004 began on Sept. 11, 2001. By Sept. 10, George W. Bush's poll numbers had reached 50 percent, the lowest of any president at that early point in his tenure. Having lost the popular majority in the 2000 election and been delivered the presidency by a 5-4 Supreme Court decision, Bush operated as though he had triumphed with a full-throated mandate. "From the very day we walked in the building," Vice President Cheney remarked, "a notion of sort of a restrained presidency because it was such a close election, that lasted maybe 30 seconds. It was not contemplated for any length of time. We had an agenda, we ran on that agenda, we won the election -- full speed ahead."

From the start Bush ran a government based on secrecy, handed over departments and agencies to more than 100 industry executives and lobbyists appointed to key positions, and exhibited belligerence toward anyone who raised a question about his right-wing imperatives. His bullying prompted Republican Sen. James Jeffords of Vermont to cross the aisle, throwing control of the Senate to the Democrats. In just months, Bush's incompetence and arrogance had induced paralysis. His presidency had already run his course.

"Never did I dream I'd hit the trifecta," said Bush after Sept. 11. As his poll numbers soared he wrapped his radical agenda in the cloak of commander in chief. Now he would attempt to implement Karl Rove's ambition of a one-party state and the neoconservatives' plan for an American imperium. Bush believed he had permanent political capital to forge a factional partisan political realignment. The war in Afghanistan, almost unanimously supported in the country, solidified his popularity and certainty.

The conservative wish list came off the shelf. Civil liberties were curtailed with the passage of the PATRIOT Act, extremists nominated as federal judges (one candidate even opposed the inclusion of the Bill of Rights in the Constitution), environmental protections ravaged and resources shifted from the Afghan war theater to prepare for Bush's ultimate objective -- Iraq. After the summer, the pressure for invasion mounted. "From a marketing point of view, you don't introduce new products in August," said White House Chief of Staff Andrew Card at the time.

The midterm elections of 2002 ratified Bush's hyper-radicalism. In the face of the "war president," members of the congressional Democratic leadership demonstrated political ineptitude, division and confusion, and the Republicans tarred them as unpatriotic. Bush's belief in his inevitability became more intoxicating.

After the Iraq "cakewalk," Bush landed on an aircraft carrier wearing a "Top Gun" uniform, proclaiming "Mission accomplished." At home, he encountered no checks and balances from Congress. The fourth estate conducted press conferences as though suffering from aphasia; it was intimidated, self-censoring and discredited through complicity in the orchestration of disinformation.

Only the lonely voices of the Sept. 11 widows demanded an accounting. Bush opposed the creation of a commission to investigate the governmental failures that had helped make possible the terrorist attacks. But the widows, the "Jersey girls," carried the prestige of tragedy that made their insistence irresistible. The testimony of Richard Clarke, former counterterrorism chief, that the Bush administration had been indifferent to terrorism shattered the atmosphere of silent obedience. His truth-telling surfaced the simmering revolt of professionals throughout the national security bureaucracies -- the CIA and other intelligence services, the senior officer corps of the military and the State Department. Then the rationales for the war crumbled when no WMD were found, and the cakewalk turned into a bloody quagmire.

Suddenly, the Democratic presidential party came to life, providing a forum and focus for outrage against Bush's policies. At first, the movement gathered around Howard Dean as an emblem of resistance, not only for verbalizing criticism of Bush but for standing apart from the enfeebled Democratic leadership. But the Democrats saw that with his stumbles Dean was not the man for the mission. Bush had counted on the Democrats once again picking an earnest but easily defeated candidate like George McGovern or Michael Dukakis, but they turned instead to John Kerry.

Beginning in March 2004 through the early summer, Bush's campaign spent more than $100 million on negative commercials trying to disqualify Kerry. Yet, Kerry remained even and with the Democratic Convention pulled slightly ahead. In a typical Bush operation, he outsourced the smears to a group that filled the airwaves with lies about Kerry's record of genuine war heroism in Vietnam. The media, mostly cable TV, acted as conduit for Bush's falsehoods, and Kerry was tarnished. At the Republican Convention, speaker after speaker stressed the Democrats' effeminacy -- "girlie men" -- and hailed Bush as all-wise commander in chief. Once again, Bush believed he was impregnable.

All he had to do was finesse the debates. But he was humiliated in all three. Kerry, however, demonstrated clarity, intelligence and maturity. Bush's response was a new ad, featuring wolves about to leap through the TV screen. But the projection of fear only exposed his vulnerability.

The war president has fallen victim to his own hubris. As Thucydides wrote: "To conceive extravagant pretensions from success in war is to forget how hollow is the confidence by which you are elated. For if many ill-conceived plans have succeeded through the still greater fatuity of an opponent, many more, apparently well laid, have on the contrary ended in disgrace."

Meanwhile, the people's own mobilization has produced new voter registrations in the millions, and hundreds of thousands of activists have spread in the past week across the battleground states. The Republicans desperately cast out ploys to suppress these voters, many of them African-American. In the end, the American people refuse to be frightened into becoming an unrecognizable nation that disdains, as the Declaration of Independence said, "a decent respect to the opinions of mankind."