Too much ado about Iowa

In an election as close as this one, does the "smart crowd" behavior in electronic markets really mean anything? 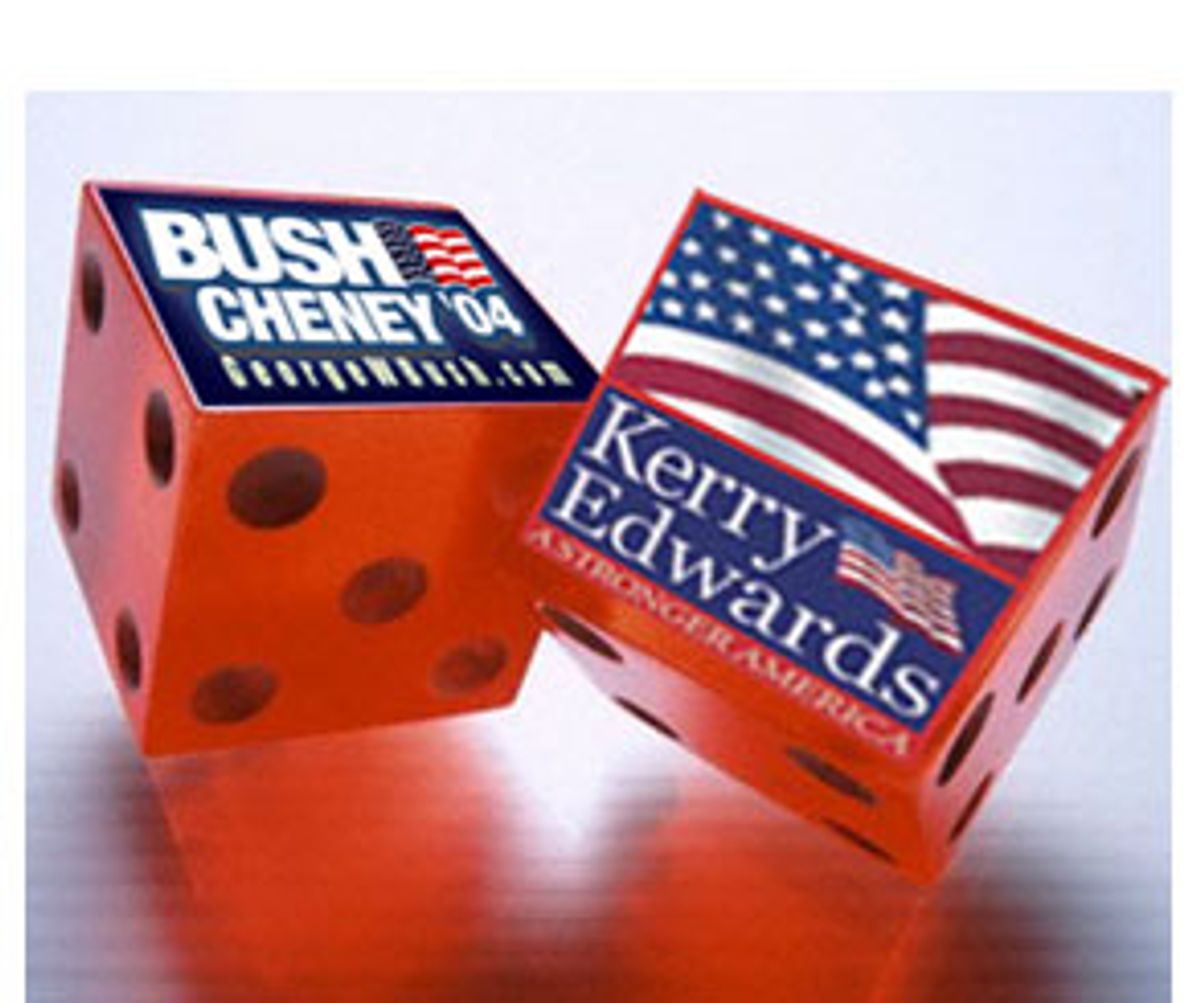 According to just about every measure we have, the presidential race right now is coming as close to a photo finish as any election in living memory. While most national polls show George W. Bush beating John Kerry by a slight inside-the-margin-of-error lead, many of the same polls also indicate that if the election were held today, undecided voters would probably choose Kerry. Battleground polls, meanwhile, show the candidates exactly tied or very close in key states. And -- for whatever it's worth -- most pundits agree, too, that at this point, barring any major gaffes or an October surprise, the race is shaping up to be a dead-even fight to the end.

With the contest stuck in this maddening 50-50 rut, why are traders on the Iowa Electronic Markets putting Bush's chance of winning at closer to 60 percent? The IEM -- a real-money, Web-based system in which people place bets on real-world events such as presidential elections -- has been predicting a Bush win since it began last summer. As I've written in several pieces since June, when I began playing the market, that prediction seemed reasonable for a long while. But as the polls show, in the weeks following the debates, the presidential race tightened considerably -- except on the IEM. Why? Does Bush really have a 6 in 10 chance of winning next Tuesday? Is the market right, or is it broken? More importantly, in such a tight race, is the IEM helpful -- can you glean any important information from the daily movements of Bush or Kerry shares on the IEM, or is watching the online trade just as useless as (if more fun than) watching an hour of "Crossfire"?

After playing the market for a few months, my feeling is that the IEM right now is wrong. Or, at least, I believe that the IEM's "winner takes all" market -- in which traders simply predict the probability of a Bush or Kerry win rather than predicting each candidate's final share of the vote -- is off. The IEM's vote-share market, which shows a much, much closer race but which is far less popular than the winner-takes-all market, is probably on the mark, but because that market is more difficult to play I've pretty much ignored it all along.

Let me stress this -- it's my personal feeling that Bush doesn't have a better than 50 percent chance of winning the race. This is not to say that I don't believe Bush can win; as I've written before, I think he can. He's got many advantages over Kerry -- of incumbency, of running at a time of an expanding economy, not to mention his consistent, very slight lead in the polls. But looking at the polls, and looking at the news of record voter registrations and the Democrats' plans for a very sophisticated get-out-the-vote operation and the independent and undecided voters' apparent swing toward Kerry and the daily horrors from Iraq and the continuing signs of the Bush administration's incompetent pursuit of the war on terrorism ... suffice it to say, I think Kerry's chances are just as good as Bush's.

But if you're playing the market, you've got to bet on someone. It's somewhat pointless to play the IEM if you're unwilling or unable to hazard a guess about who will win next week. All along so far, when making this guess in my trading decisions, I've tried to work "objectively," "rationally," according to what I believed the "fundamentals" of the race between Bush and Kerry were pointing to. This amounts, generally, to following the news closely and guessing how you think it'll "play." But what do you do when the fundamentals suggest a close race, and when every other piece of news that comes along seems to point in a different direction, stubbornly refusing to form any kind of trend?

Here's why I think the IEM winner-takes-all market is wrong: When things are this close, you've got to in some sense go with your gut. And my gut is partisan; I don't want Bush reelected. For much of this campaign, I've looked on the possibility of a Democratic win rather pessimistically. Now, though, I see it as a good chance, and while I'm worried, I'm also optimistic. Kerry can win. To be honest, my gut, actually, thinks Kerry will win. So if I'm going to bet with my gut, I'm going to go with Kerry. I think Bush supporters make a similar calculation when they trade on the IEM. They, like me, first attempt to make some kind of rational calculation about where the race is going, but they too feel it's pretty much deadlocked. So they look within themselves, and based at least partly on their partisan leanings, they decide that Bush will probably win. And in the end, because Republicans likely outnumber Democrats on the IEM, what you get in the market when many people work out their trades based on partisan gut instinct is ... well, you get what we see now, with Bush's unreasonable lead in the market.

I have to say that I have no evidence for this. It's just a theory based on how I've been thinking when I make my trades. But one of the reasons I like this theory is that it explains the IEM winner-takes-all market's failure of 2000, when it predicted by a two-thirds margin that Bush would win the popular vote count. That race, too, was extremely close; could traders' decisions have been colored then by their partisan leanings?

To see if my theory held any water, I called up James Surowiecki, the New Yorker magazine's financial columnist and the author of "The Wisdom of Crowds," the book that initially sparked much media interest (including my own) in the IEM. Happily, Surowiecki agreed with my sense that the IEM winner-takes-all market's prediction seemed off, especially when you consider the IEM vote-share market's prediction of an extremely close race. Why were traders on the winner-take-all market showing Bush with such a high chance of winning if traders on the vote-share market (possibly the very same traders) believed that he would win, if he did, only by a very small point spread? "I agree with you that on a visceral intuitive level it doesn't seem right," he said. Still, he said, he -- and I, and the pundits -- could be wrong. Maybe the collective wisdom of the crowd of traders was correct in its prediction that Bush had a better chance of winning than Kerry. "After all, I wrote an entire book about how individual intuitions are nowhere near as good as the group's."

But Surowiecki also pointed to the difficulty of really ever determining that the market is broken. What the IEM is saying right now is that Bush has a 60 percent chance of winning -- so if Kerry wins, does that mean the IEM was wrong? No, because it also predicted a 40 percent chance for Kerry. Only if you look at many elections over time can you tell if the market works. (If the market is wrong this year, though, its consecutive failures won't amount to a very good record, even though it was right in 1988, 1992, and 1996.)

Surowiecki graciously allowed that I could be on to something with my idea that partisanship is coloring traders' judgments in this close race. "It could be that the polarization in the electorate is spilling over to the market, insofar as you'd say that a large percentage of traders would be Republican. So it may very well be that what you're seeing here is a reflection of that." But Surowiecki is more careful about coming to conclusions than I am, and he pointed to many other reasons for the IEM's love for Bush.

Most important, Surowiecki noted, is that the market this year is, thanks to books like his and articles like this one, much more popular than in previous years. About 65,000 contracts a week, on average, are now traded on the IEM, compared with about 10,000 per week four years ago. Moreover, the IEM is now routinely discussed as a reliable indicator of where this race stands. "How does having a market become a part of public attention change the nature of the market?" Surowiecki asked. Many readers of Salon have suggested the possibility that Republicans are gaming the market to convince gullible journalists like me that a Bush win is inevitable. The "Karl Rove minion theory," in which Rove's surrogates are spending small amounts to buy up Bush shares online, "does not seem implausible to me," Surowiecki said.

How useful is the market, though? For some of the problems I've mentioned here so far, Surowiecki doesn't believe that the IEM winner-takes-all market is very useful at all. But he's got faith in the vote-share market, where today you can buy a Bush share for about 51 cents, and Kerry share for about 49 cents (which means the market thinks Bush will win by 51 to 49 percent of the two-party popular vote). In other words, a very close race, with a slight lead for Bush.

Of course, you probably already guessed that that's how the race would end up.