"I believe in the promised land"

Bruce Springsteen takes the moment into his hands -- and joins John Kerry for a massive Wisconsin rally. 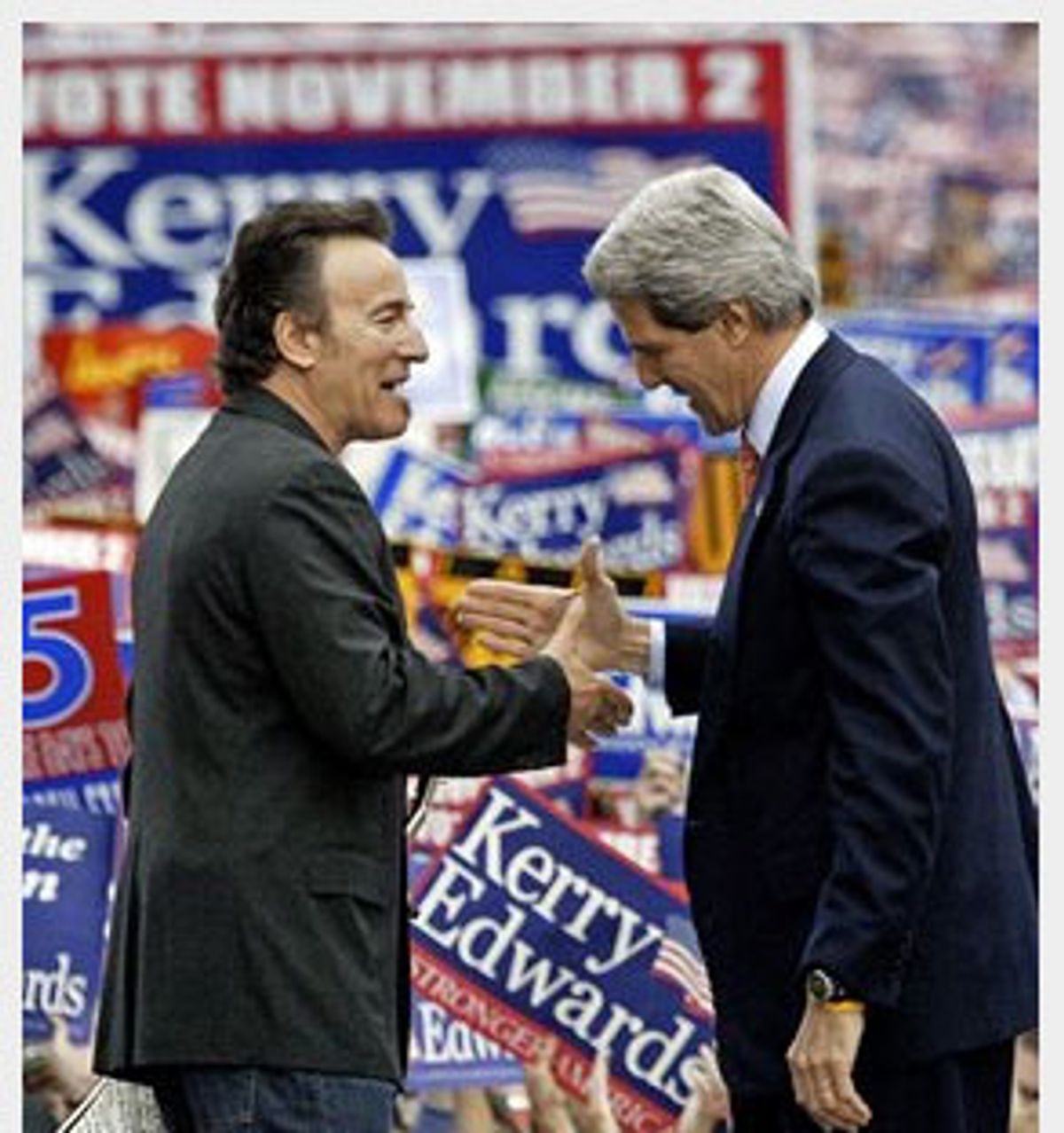 The presidential campaign comes rushing toward you in a million shrill words, a noisy, cross-country game of tit-for-tat played through TV feeds and the sharp remarks of a hundred sniping surrogates. It's loud and it's relentless, or at least it was until Bruce Springsteen stepped onto a small stage here Thursday afternoon.

With 80,000 people and the future of the nation in front of him, Springsteen played a wistful, acoustic version of "The Promised Land" then quietly offered the most eloquent stump speech of this long presidential race. "I've been writing about America for 30 years," he said. "I've tried to write about who we are, what we stand for, what we fight for. I believe that these essential ideals of American identity are what's at stake on Nov. 2."

Springsteen talked about the choice facing America on the recent "Vote for Change" tour benefiting America Coming Together, but this time he delivered his remarks with much more of the world watching. Hundreds of journalists from around the globe hung on Springsteen's every word. And with people jammed through the streets leading to Wisconsin's State Capitol, the city of Madison literally stood still to listen.

Springsteen ticked off a long list of the things that matter: economic justice, a living wage, a "sane and responsible foreign policy," civil rights, and "the protection and safeguarding of our precious democracy here at home." He said: "I believe that John Kerry honors these ideals. He has lived our history over the past 60 years, and he has formed an adult view of America and its people. "

Quietly strumming his guitar as he spoke, Springsteen said Kerry understands that people are not infallible, that struggle and heartbreak are an inevitable part of the human experience. "That's why we need each other," he said. "That's why 'United We Stand' ... and 'one nation indivisible' aren't just slogans. They need to remain the guiding principles of our public life."

As the huge crowd grew quiet, Springsteen quoted the late Sen. Paul Wellstone -- "The future is for the passionate" -- and he said the time to act is now. "That's why I'm here today to stand alongside Senator Kerry and to tell you that the country we carry in our hearts is waiting." When he was done, Springsteen reached for his guitar and leaned into "No Surrender," the song that opens every Kerry campaign rally. As autumn leaves fell around him, Springsteen reinvented the song. The anthemic rock 'n' roll song became a meditation on promises made and hopes held tight, and he dedicated it to John Kerry.

The largest crowd -- ever, for anything -- in Madison's history exploded in applause. When Kerry took the stage a few minutes later, he fed on the energy. While he'll never match Springsteen's poetry, Kerry's Madison speech was strong and sharp and carried all the passion that Paul Wellstone or Bruce Springsteen could have asked of him. He hit Bush hard for ignoring reality in Iraq, for putting American troops at risk, for turning his back on the middle class in favor of the big corporations that support him. Somewhere in there, the usually humor-challenged Kerry got off a good line that underscored the cultural divide -- and so much else -- between the candidates: When Bush heard that "The Boss" was performing in Madison, Kerry said, "he thought we meant Dick Cheney."

Kerry's aides were overjoyed. Kerry spokesman Mike McCurry has been unusually serious and quiet over the last two days. In Madison Thursday afternoon, he was beaming. As Kerry began speaking, he said: "It doesn't get any better than this."

Springsteen will appear with Kerry again tonight at Ohio State University in Columbus. The Midwest focus is intentional, of course, and not just because Springsteen's working-man sensibilities play better in big cities here than they would in a condo complex in Palm Beach. Kerry can win without Florida if he can hold on to upper Midwest states like Wisconsin, but it's hard to conjure up any calculation that gets Kerry to 270 Electoral College votes if he loses both Florida and Ohio.

On the press plane Thursday morning, Kerry spokeswoman Allison Dobson said the campaign believes Kerry is up by about 2 points in Ohio now. And a new Los Angeles Times poll puts Kerry ahead there by 6. But both campaigns are treating Ohio as anybody's to win. Bush will be in the Buckeye State Friday with Arnold Schwarzenegger. Kerry will return Monday night -- if not sooner -- when Springsteen will appear again with the candidate at an election-eve rally in Cleveland.

Springsteen isn't the first rock star to open for Kerry, but he's the biggest. Patti LaBelle sang the national anthem in Philadelphia Monday, Sheryl Crow opened for him in Las Vegas, and Carole King performed before Kerry arrived in Rochester, Minn., Wednesday. Jon Bon Jovi travels from rally to rally on Kerry's chartered 757. After performing an acoustic version of "Livin' on a Prayer" -- it's better than it sounds -- he exhorts fans to make a difference in what he invariably calls "these United States."

Kerry played in a rock 'n' roll band as a kid, and his personal assistant, Marvin Nicholson, is responsible for hauling the candidate's acoustic guitar off and on the plane each time the traveling campaign stops for the night. Kerry rallies begin with a recorded version of Springsteen's "No Surrender," and they usually end with U2's "Beautiful Day." At a rally Thursday morning in Toledo, the sound man paid tribute to the Red Sox' World Series win, cueing up Boston's "More Than a Feeling" as Kerry finished speaking.

For all the excitement over the Springsteen appearance, the Toledo rally was actually Kerry's best of the week. The University of Toledo's Savage Hall may be the ugliest auditorium in America, but an electrified crowd lit it up. Kerry took the stage wearing a Red Sox cap and soon had a few thousand supporters screaming in a foot-stomping frenzy. The resulting rumble was so loud that Kerry likened it to the "rolling thunder" he once heard in Vietnam.

As with all his stops, Kerry's Toledo rally offered up made-for-TV sound bites and a localized pitch to the home-town folks. Kerry spent a few minutes reveling in the Red Sox' win -- "It's a great American story," he said -- and then vowed that he'd root for the minor league Toledo Mud Hens from here on out. In a slightly more substantive appeal, he vowed to return to Ohio for a jobs summit if he is elected.

For the national TV news, Kerry had a few fresh words but no new thoughts on the 380 tons of munitions missing in Iraq. Kerry aides believe the issue is playing well for them now, particularly on television, and they're going to keep pushing it. With the munitions story, the Democrats seem to have taken a page from the Republican playbook: Paint the story with big strokes, don't get bogged down in the details, and get all the surrogates -- from Joe Biden to Wes Clark -- attacking on the same points all at once. Six months ago, Kerry would have proceeded cautiously on the story, carefully documenting every question about his charges even as he made them. Not so now. "The bottom line," Kerry said Wednesday, is that "the weapons are not where they're supposed to be."

The Kerry assault has kept the Bush campaign on the defensive. Just as the Mary Cheney flap knocked Kerry's message off the air for several days after the third presidential debate, the munitions story is keeping Bush from getting his message out now. After checking in on the evening's news shows Wednesday night, a satisfied Mike McCurry told Salon: "We won the day."

Thursday wasn't looking much better for the Republicans. The Bush-Cheney campaign dispatched Rudy Giuliani to the morning news shows in the hopes of killing off the story, but Mr. 9/11 botched the job. He said any blame for safeguarding the weapons lies not with the president but with the troops on the ground. It was exactly the sort of "denigrating" of the troops that Bush had accused Kerry of doing, and the Kerry campaign pounced on it, immediately circulating a transcript and a video clip to reporters covering the race. The Bush-Cheney campaign responded by reminding reporters -- just in case they had forgotten -- that John Kerry voted for the $87 billion before he voted against it. In an e-mail to reporters, Bush-Cheney spokesman Steve Schmidt said that Giuliani is a trusted leader in the war on terrorism, and he offered some advice for John Kerry: "Mind the stature gap, Senator."

After his rally with Springsteen in Columbus tonight, Kerry will fly to Florida to prepare for a full day of campaigning there Friday. He returns to Wisconsin Friday night for what aides say will be the start of "intensive" campaigning through Election Day. Kerry aides aren't saying -- if they know -- where the candidate will be after Wisconsin Saturday morning. Safe bets are probably Iowa and Minnesota, where Kerry campaigned earlier in the week, and Pennsylvania, where a new poll shows the race tied but Kerry aides insist he's in good shape. Democrats are nervous about Hawaii, but such a long trip isn't in the cards with so little time left. Arkansas could appear on Kerry's schedule, and there is sure to be at least one more trip to Florida.

The only immovable objects on Kerry's schedule are the election-eve rally with Springsteen in Cleveland Monday and a "victory" party in Boston Tuesday night. Whether it's much of a party -- and, as Springsteen said, so much else -- depends on what happens between now and then.