Ralph Nader's new pamphlet prompts this revelation: Between the Uranian right and bourgeois left, Nader may be the moral choice, but he's still the wrong one. 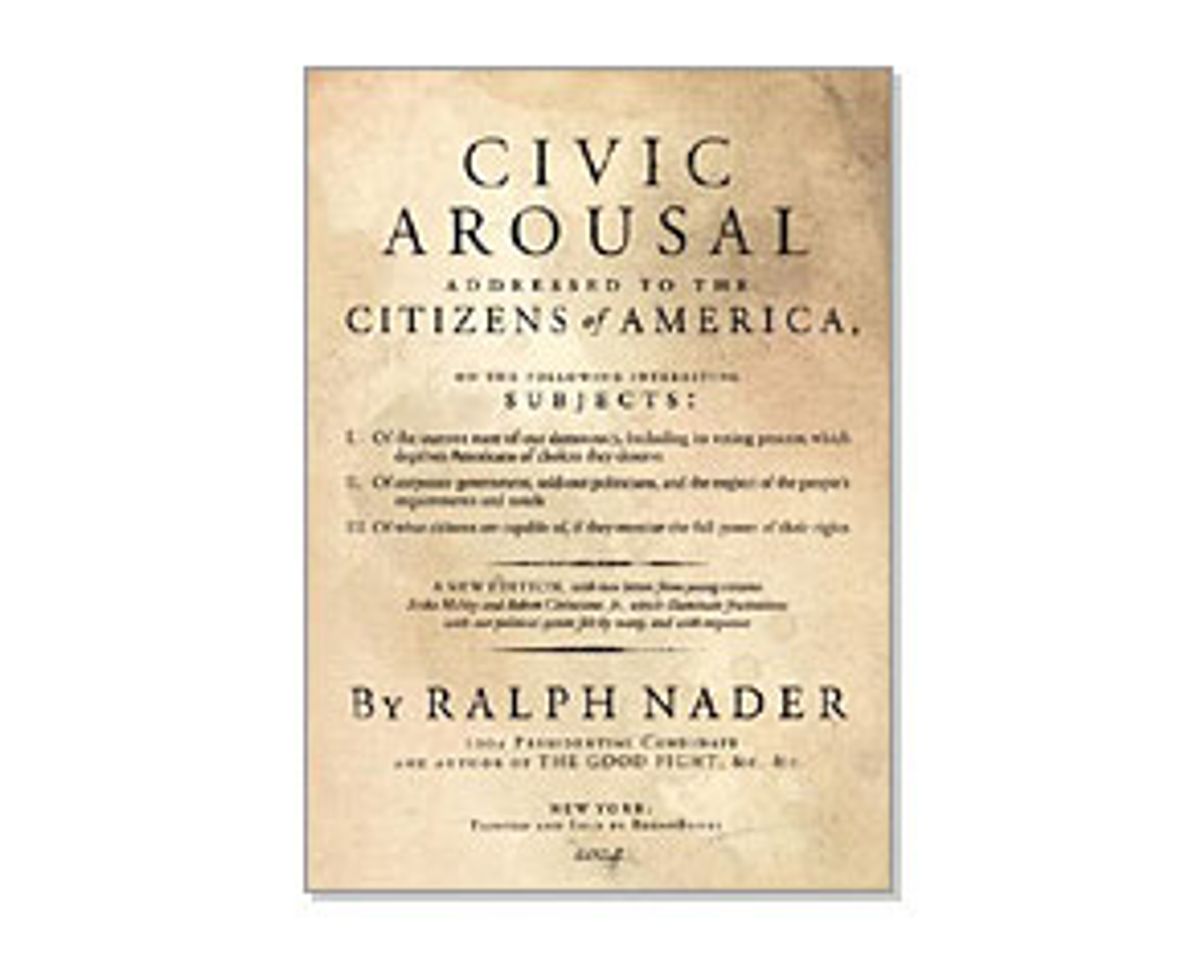 In his new Tom Paine-manqué pamphlet, "Civic Arousal," Ralph Nader answers your letters. No, these aren't letters like: "Dear Asexual Awkward Consumer Advocate: My boyfriend is acting so weird!" That might be entertaining, or at least jolly -- things Nader has never allowed himself to become. This is about as jokey as Uncle Ralph gets, when he for some reason begins contemplating bird-watching amid his response to a bewildered waitress from Tallahassee, Fla., named Erika McVoy:

"Well, that is a nice, healthy, outdoors hobby, certainly one to be enjoyed while there are still different species of birds around. But I was possessed by a musing. What if, oh, what if that bird had flown down to Washington, D.C., and alighted on the Capitol dome of the U.S. Congress, followed by a rush of birders? Imagine if some of them then switched from bird-watching to Congress-watching ... oh well, just dreaming."

Yes, "Civic Arousal" bugs me, on a lot of levels. It's preachy, condescending and pretty much tone-deaf (none of which will surprise veteran Nader-watchers). It reflects no awareness on Nader's part that in 2004 the nation faces an exigent emergency that demands compromise even on the part of those who feel that the two-party system has become more blackened with disease than the valves of Dick Cheney's heart (and I share that belief). If Nader can't see that this year's election is basically Chirac vs. Le Pen, American-style -- a conflict between a more-or-less legitimate politician and a coterie of wacked-out zombies from the Seventh Planet, with the added complication that the Uranian undead actually hold power in this country -- then he's wandered off into his own private moral universe, following a keening radio frequency no one else can hear.

But I don't want to pile on Ralph Nader unnecessarily; this publication has done an excellent job of that, as it happens. There's something almost pathological about Democrats' fascination with Nader. As loopy as he has become, he still haunts their party like some combination of bad conscience and repressed Freudian desires. Virtually everything Nader says about the institutional Democratic Party's corruption, its soullessness and its abandonment of its roots is true. Furthermore, most Democrats to the left of Zell Miller know it's true at some level, and it is endless, self-lacerating torture for them.

Here is Nader, excoriating those "liberal-progressive Democratic Party adherents" who agree with him on the issues but urge him to shut up this time around: "These partisans are hostages to our electoral system, starting with the atavistic electoral college to a winner-take-all structure in which the two major parties find reassuring comfort. Apparently, instead of fighting against this ossified structure that strips huge numbers of actual voters of any representation" -- which means you and me, by the way, unless we live in one of the 10 or 12 states still being contested in this election -- "these partisans focus their ire on any small candidate who they feel may tip the balance. To compound the ironies, they want to silence the exercise of campaign speech by the very small candidates who can speak out and start a movement to rationalize distorted elections, so that those who win the most votes, as Al Gore did ... win the presidential election."

I suspect that one reason so many Democrats refuse to let go of the Nader-brought-us-Bush argument is because that narrative possesses an awful karmic justice. We sold our souls for power, we abandoned our alleged principles (they tell themselves) and became the other, wimpier party of Big Corporate Bucks -- and we still didn't win! It must be the doing of that lone weirdo out there on the left flank, the one who drones on and on about integrity and democracy and makes us feel so bad. A sort of dream-logic wish-fulfillment is at work: We deserved to lose, and Nader was the one who pointed that out.

It's time to come clean: I voted for Nader in 2000, more to support the idea of building up the Green Party than out of tremendous enthusiasm for the guy himself. While I personally have nothing to apologize for (I live in a state that hasn't been in play since 1984), those of us who argued that there was really no difference between Bush and Gore look pretty stupid now. None of that reflects especially well on Al Gore, by the way; it simply wasn't evident at that early date that the then-Texas governor was the real-world version of Greg Stillson, the born-again, world-destroying future president in Stephen King's "The Dead Zone."

Furthermore, fellow former Nadernauts, there's no point pretending that Ralph's presence on the ballot did not affect the results last time out. I was convinced of this by no less an authority than Bill Moyers, a political independent who has little time for the current Democratic Party. He says he told Nader that running as a third-party candidate in 2000 was assuming too large a historical responsibility, and that Nader's role ought to be organizing a grass-roots conquest of the party, in much the way that core Republican activists captured their party in the '80s.

So go back to your angry Democratic relatives this Thanksgiving and tell them they were right about 2000. The apology I suggest is: "Yes, given the fact that Gore ran a crappy campaign and represented a fatally compromised party buried in corporate sleaze up to its Hair Club for Men implants, and that he used the word 'lockbox' repeatedly and had the most irritating scold in the history of the world as his running mate and generally came off like a grumpy vice-principal and seemed eager to capitulate when the Republicans disenfranchised thousands of black and Jewish and elderly voters and stole the election -- once you accept all of that and the hanging chads and the Rehnquist court as natural and inevitable, then, yes, the 40,000 or so Nader votes in Florida that would have otherwise gone to Gore (leaving aside the question of the 800,000 or so Florida Democrats who voted for Bush) cost the Democrats the election." That ought to promote some healing around the holiday hearth.

As Nader points out in his response to McVoy's letter, if the Democrats pushed for electoral reform, and if we had something like the proportional-representation or instant runoff voting system used in several European countries, the spoiler effect of third-party candidates would be neutralized. Under such a system, Gore would presumably have won in 2000, even with Nader and Pat Buchanan and your raving libertarian granddad and whomever else on the ballot. But that's even more of a pipe dream than Nader's goony Capitol Hill bird-watching fantasy. In the current, corporate-dominated system, the oligarchies of both parties thrive on low levels of citizen participation.

By Thanksgiving we will know -- dear God, let us hope we will know -- who won this year's election, which ought to dictate the tone of that frank chat around your family fireside. If Bush wins, the Democrats will find a way to blame Nader. Take that to the bank. If John Kerry wins, much of the credit will belong to the independent left groups (most entirely unconnected to the Democratic Party) who have worked so hard to register young voters, African-Americans, recent immigrants and other disenfranchised groups, and motivate them to participate.

That's exactly the sort of civic engagement Nader's new pamphlet -- and his life's work -- calls for and exemplifies. As Ralph himself fades into oddball irrelevance, the perma-candidate of the perennially disgruntled, his final legacy may be a host of younger activists, both in mainstream politics and street-level direct action, who are fighting a last-ditch battle for democracy.

Personally, I hold out little hope for Kerry and the Democrats. Oh, Kerry may be elected, and I'll be appropriately grateful if that happens. (If I lived somewhere in the 10 percent of America where counting the votes actually matters, I'd even vote for him.) I'm told he's an intelligent man, and likable when you get to know him. But here's his platform as I understand it. On Iraq: More war. Lots more war. In fact, let's dig ourselves into an LBJ-style nightmare and let President John McCain get us out of there in 2009. On gays and lesbians: Love you guys! But please shut up. On healthcare: My complicated new government program is not a complicated new government program!

Yes, yes, yes, yes, yes: Kerry is a lot better than Bush on the environment, abortion, civil liberties and judicial appointments. Again, it's a comparison between that good-looking real estate guy who only gouged you a little and Chucky, the devil doll from the "Child's Play" movies. It's possible to draw these distinctions, and to see the almost apocalyptic importance of getting rid of Bush and Ashcroft and Cheney, while still holding in your head Nader's idea that the current system stinks, and that American democracy will die (if it hasn't already) unless it's reclaimed by citizen action, in daily life and at the ballot box.

For all his hectoring, all his puritanism, all his near-total disconnection from contemporary culture, Nader is still capable of striking eloquence. In his letter to Robert J. Cirincione Jr., a recent college graduate from Hagerstown, Md., he waxes almost Hegelian about the social control corporations now exert, such that the values young people now absorb in adolescence are those of corporate capitalism, not citizen democracy. Big business has been a profoundly anti-democratic force in American history, he says, and a government that privileges big business over ordinary people is paving the way toward fascism.

Greed and lies have disenfranchised almost an entire generation, Nader writes, who have absorbed the lesson that no one can be trusted and everything is for sale. We need to resist the effects of "growing up corporate," so that "we are free to see the present as reality rather than a bundle of myths, deceptions, tinsel temptations, and ideological rigor mortis." This seems to echo Marx's famous "all that is solid melts into air" passage from "The Communist Manifesto." But even Marx, driven by dreams of a distant social transformation that would never come to pass (at least not the way he imagined), was far too hard-headed to seek to undermine a mainstream "bourgeois" reformer in a campaign against a blood-drinking neo-imperialist zealot.

As today's other great advocate of citizen participation, Marshall Mathers, might put it, I'm still feeling you, Ralph. You're right about the big picture, and I'll always appreciate the way you filled people like Joe Lieberman and Al From with Kierkegaardian self-loathing. But all those people who hate you are also right, this time around: You're kind of acting like a creep. The house is on fire, as in right now, and your pissing and moaning isn't going to put it out. Or at least not the moaning.