Keep going after Bush, the way the president should have pursued bin Laden at Tora Bora. 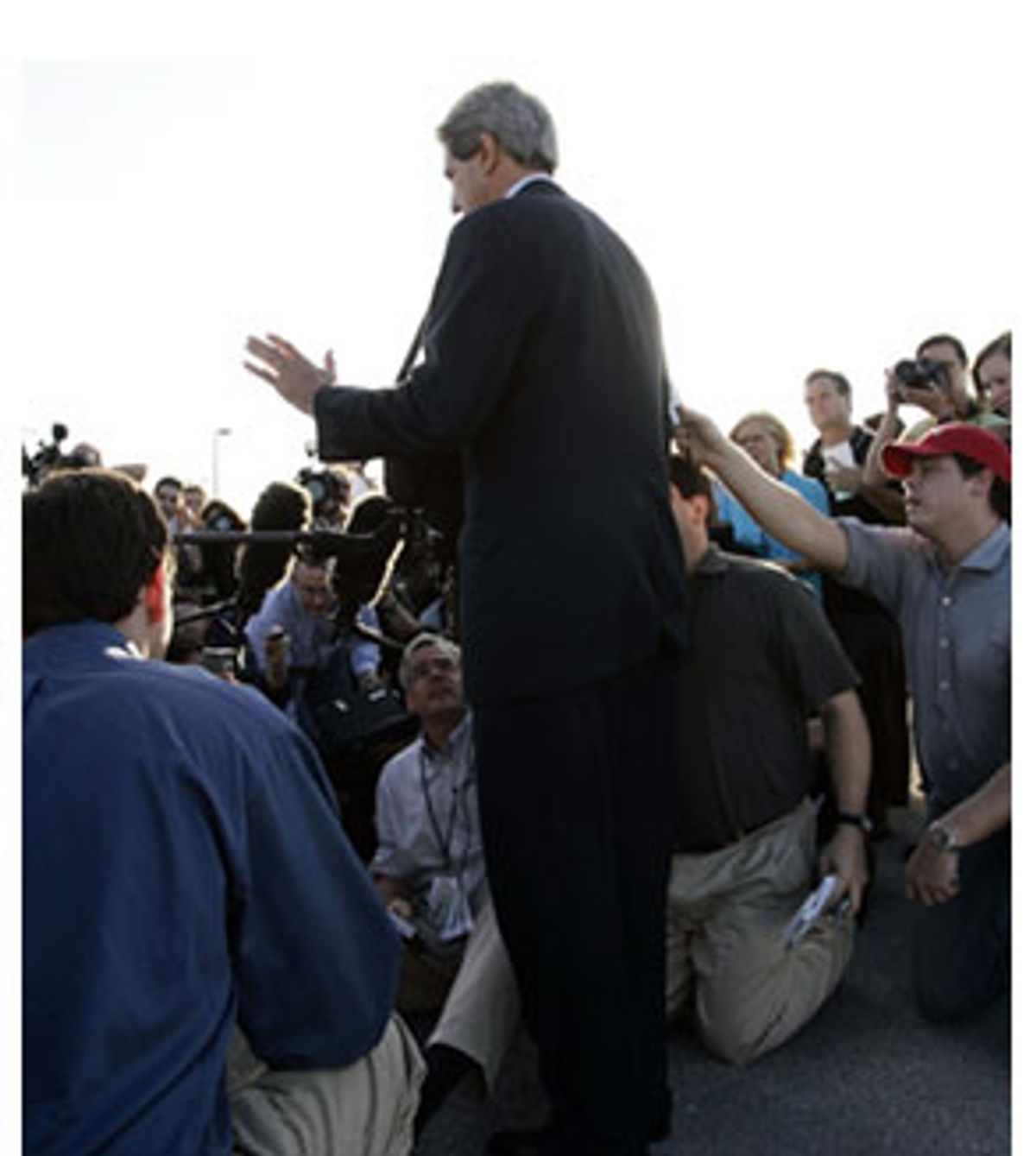 Sure, paranoid liberals have worried for months that Osama bin Laden would be the October surprise in this presidential election. But it was supposed to be a captive Osama, dragged in chains to Crawford, Texas, shorn and humbled like Saddam after being extracted from his spider hole. What to make of swaggering Osama in his golden robes, hectoring President Bush about his behavior the morning of 9/11, warning Americans of more terror to come just four days before the election?

I watched excerpts of the video with a sinking feeling, at first, that Video Osama could help Bush almost as much as an Osama in an orange jumpsuit. Like most Americans, I hate even looking at him. He brings out my patriotic fury. I can't stand the idea of the Saudi fascist trying to shame Bush with a garbled version of the president's "The Pet Goat" moment, when the president continued listening to a child read that apparently riveting story after learning that the second tower had been hit. (Osama clearly hasn't had time to rent "Fahrenheit 9/11" to get the accurate version of what happened.) Even though I still wonder why Bush stayed in that classroom, hearing bin Laden taunt him with the memory of the people trapped in those towers, people whose murders he now admits to planning, is revolting.

Clearly bin Laden's appearance can help Bush by bringing back the horror of that September morning, by making swing-state voters angry at the unprovoked attack on Americans and nostalgic for the leadership Bush showed briefly in its aftermath -- after a wandering Air Force One finally brought him back to the White House. But the al-Qaida leader could help Bush even more if his emergence rattles John Kerry in these closing days of the campaign, and brings back the tentative, cautious candidate-persona Kerry left behind with the debates.

After stumbling in the Swift boat summer, Kerry has made this a thrilling race in the last month because he finally found his voice, settled into his skin, and faced up to the fact that he had to confront the president directly for his terrible failures over the last four years. Struggling to defend his own early, complicated stance on Iraq -- especially in the face of the Bush camp's droning taunt of "flip-flopper" -- Kerry lost the momentum he had coming out of the Democratic convention. His delay in hitting back after the Swift boat smears hurt more. But in the days before the presidential debates he stiffened his spine and the American people began to see a new John Kerry -- sober, resolute and determined to fight back.

Kerry soared in the first debate when, ironically, given Friday's developments, he attacked Bush hard for letting Osama slip away after he'd been isolated in Tora Bora. "We had him surrounded, but we didn't use American forces, the best-trained in the world, to go kill him," Kerry said then. "The president relied on Afghan warlords that he outsourced that job to." Bush was on the ropes immediately. Kerry kept the line a staple of his message in the weeks afterward.

But on Friday, when Kerry issued a brief statement about bin Laden's reappearance to his press entourage on the tarmac in West Palm Beach, there was no message about Tora Bora. "In response to this tape from Osama bin Laden, let me make it clear, crystal clear. As Americans, we are absolutely united in our determination to hunt down and destroy Osama bin Laden and the terrorists. They are barbarians. And I will stop at absolutely nothing to hunt down, capture or kill the terrorists wherever they are, whatever it takes. Period."

An "unusually somber" Mike McCurry later told reporters, according to a pool report, that he didn't know yet whether Kerry would keep the Tora Bora line in future speeches. "I'm not going to talk about politics in connection to this," he said, adding, "We gave the reaction right now to you that he wanted to give."

I'm a huge Mike McCurry fan, and I understand why he's unusually somber, but I hope Kerry keeps the Tora Bora line -- and plenty more aggressive lines just like it -- in his speeches this weekend. Kerry can't win unless he reminds Americans why bin Laden is still around to taunt the president and threaten our safety. I was happy to see Kerry -- before his canned statement to the press corps -- use his Tora Bora thrust in a brief interview with a Wisconsin television station (broadcast on CNN). After the usual boilerplate about "all of us are completely united -- there's no such thing as Democrats and Republicans" in our disgust for bin Laden, he did add, "I regret that [Bush] didn't choose to use American forces" to capture bin Laden, but instead "outsourced the job to Afghan warlords in Tora Bora."

Kerry's been on a roll in the last month. His appearances with Bruce Springsteen Thursday were the high point of the campaign. If I were a really paranoid liberal, I'd say Karl Rove shipped the Osama tape to al-Jazeera yesterday just as the Kerry campaign peaked, with American icon Springsteen giving one of the best political speeches I've ever seen, praising Kerry as a fighter for the people and ideals the singer has sung about for 30 years.

"He's shown us, starting as a young man, that by facing America's hard truths, both the good and the bad, that's where we find a deeper patriotism," said Springsteen of Kerry. "That's where we find the power that is embedded only in truth to make our world a better and safer place."

Kerry has to help Americans face yet another hard truth: That we're led by a president who has mired us in nightmarish war and doesn't know how to make us safer. And before the ruthless and desperate Bush campaign can use the bin Laden tape to sow more panic among the American people -- the only way it can scratch out a victory on Tuesday -- Kerry must use the sinister video as one more exhibit in the case he has been forcefully making for Bush's incompetence.

It was fine for Kerry to sound a "we're all Americans at times like these" note, at least in his initial public reaction. But if he keeps singing it, he's in trouble, because that's Bush's song. Americans want reassurance that Kerry will be a forceful commander in chief. There is no better way to do that in these last days of the campaign than by going after the current, hapless commander in chief. "The country we carry in our hearts is waiting," as Springsteen told us. But we won't get it if Kerry doesn't fight for it.