Stars try to shine the way in Ohio

Paul Newman, Steve Buscemi, Matt Dillon and a cast of dozens dazzle Cleveland with a door-to-door drive to get out the vote. 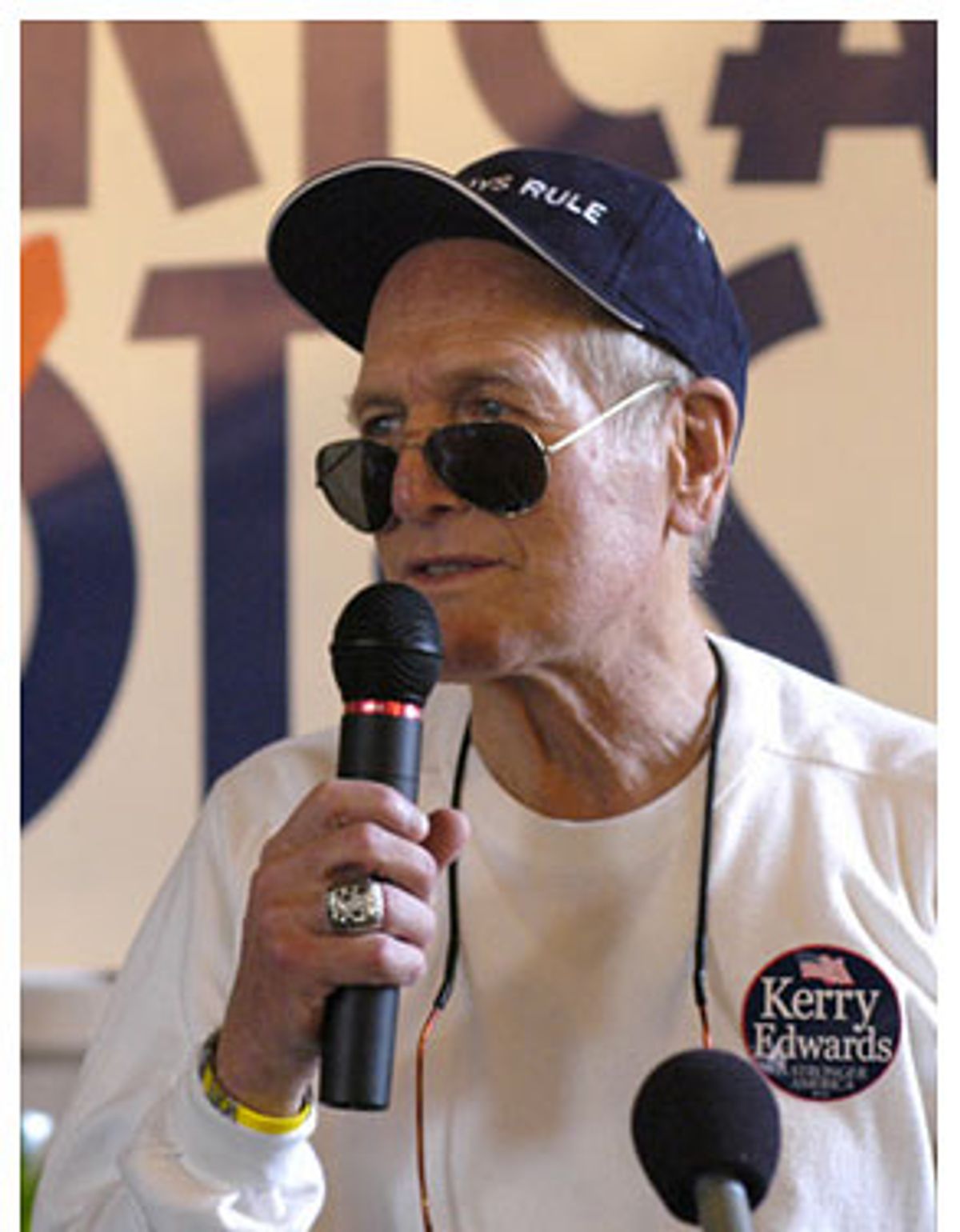 A silver-haired woman walked outside in her pink robe Saturday morning to find a cluster of actors on her driveway and TV cameramen everywhere. Actors Steve Buscemi and Chad Lowe, Rob Lowe's less-famous brother, spoke to her while Timothy Hutton walked down the street knocking on doors, urging Democrats to get out and vote and Republicans to reconsider. Next door, Paul Newman, wearing a white sweater with a Kerry-Edwards sticker on his breast, stood on the front porch of a lovely Tudor house. It was his childhood home, a place he hadn't been back to in decades, and he was there to canvass the new owners.

It was a spectacularly sunny day, and the leafy street in the affluent, liberal enclave of Shaker Heights was carpeted in auburn leaves. It all looked a bit like a movie set, a backdrop of archetypal fall suburban splendor. The trick was in figuring out whether the unfolding scene was inspiring drama or farce. Throughout the day on Saturday, as a busload of celebrities traveled through Ohio to rally Democrats to get out the vote, it was a little of both.

As the presidential campaign careens toward its world-altering climax, Ohio feels like the improbable center of the universe. Besides the candidates and their relatives and surrogates, hordes of political celebrities and Hollywood stars are descending on this resolutely unglamorous state. "The Lord of the Rings" star Viggo Mortensen campaigned along with Howard Dean on Saturday. Michael Moore gave several speeches. The right has less star power, but Arnold Schwarzenegger appeared with Bush on Friday, and Sean Hannity and Oliver North are in Akron today.

Meanwhile, battalions of progressive volunteers have come from all over the country, here to make sure that every Ohio voter is visited multiple times, often with literature specifically tailored to his or her particular concerns. Sometimes it feels like a circus, but sometimes it's beautiful, a political moment when everyone wants only to do all they can.

The celebrities were touring the state as part of a campaign called Bring Ohio Back, which has been organizing celebrities to get out the vote in Ohio. They spent the weekend traveling by bus, visiting offices of America Coming Together, the country's largest progressive get-out-the-vote operation, handing out pro-Kerry fliers at high school football games and supermarkets, and going door to door to talk about the election with voters somewhat dazed by the surreal spotlight shining on them.

The day began with a breakfast reception for ACT volunteers in Cleveland Heights, held in a lovely hall hung with chandeliers and Turkish carpets. Bagels and coffee were served in one corner, near a long table where new volunteers could sign up for duty. People wandered in and asked, "How do I get hooked up with a group?"

Many had taken time off from prestigious jobs to volunteer at the grass roots. Paul Spencer, a New York City advertising copywriter and Cleveland native who worked closely with Bill Clinton on his 1992 presidential campaign, was in town knocking on doors in the area where he grew up. "I called all my old high school friends," he says, as well as a high school teacher from 30 years ago. They formed a team of 13. "I feel like I've gone from the officers' club to leading a bunch of grunts through the trenches. I kind of like this better."

Paul Newman spoke only briefly to the group. "You guys are doing all the heavy lifting and I get my picture taken," he said. Someone in the crowd called out, "Bless you, your record speaks for itself."

Afterward, Newman told a small scrum of reporters, "This is the most important election of my entire life." Reports of voter disenfranchisement and harassment in the state had him especially worried. "If you can't have free and fair elections in America, where can you have them?" he asked.

Then the Bring Ohio Back bus -- along with lots of local reporters -- headed out to Newman's old neighborhood. At this stage of the campaign, the idea is to turn out Democratic voters, but while most of the actors went to homes with Kerry signs on their lawns, Timothy Hutton rang the bell of a house with four Bush signs. The man inside had printed up 50 photocopies of Osama bin Laden's recent remarks, which he planned to hand out that day, apparently because he felt they demonstrated that the arch-terrorist wants a Kerry victory. Hutton talked to him for a while, and by the end of their conversation, the man said he hadn't completely made up his mind who to vote for.

Perhaps he was simply cowed by being confronted with a movie star first thing in the morning. Still, Hutton said, "Why preach to the converted?"

Todd Stevens, a management consultant who grew up in the neighborhood but lives in Los Angeles, was walking his family's dog and looking around quizzically at all the commotion. "This is very funny," he said. "It's comedy." Politically Stevens is on the actors' side -- in fact, he was in Ohio for the weekend volunteering with the Kerry campaign. But the whole spectacle on Saturday struck him as preposterous. He pointed at Joe Pantoliano, who played Ralph Cifaretto on "The Sopranos," and said, "You can't wear what the Sopranos guy is wearing -- his shoes cost more than most people's mortgage! I can't believe this is happening in my town."

One Canadian reporter seemed to be thinking much the same thing when she asked Newman whether the stars' efforts might backfire. "I don't give up my citizenship just because I'm an actor," he said.

Many Ohioans seemed fine with that. Before Saturday, I thought locals might react like Stevens, or worse. Would swing voters really appreciate Eliza Dushku -- "Buffy the Vampire Slayer's" Faith -- or Hillary Swank trying to influence their choice? What would the parents at the high school football game in Massillon, Ohio, make of Julianna Margulies' T-shirt, which juxtaposed a woman's crotch and the president's face and the words "Good Bush/Bad Bush"?

In fact, they loved it. Massillon, near Canton, is an area with lots of steel mills and union men, and it's been hemorrhaging jobs. At a tailgate party before the Tigers game, a long line of people waited for the actors to serve them hot cider. A few of the locals wore Bush-Cheney stickers, but many more wore Kerry-Edwards buttons, or buttons that called the administration Asses of Evil. One girl's T-shirt showed Bush in a tall cowboy hat, with the words, "Idiot Son of an Asshole."

Fifty-year-old Carol Carpinelli said she was grateful that the celebrities were out campaigning for Kerry "when they've got movie star stuff to do." She was there with her boyfriend, 50-year-old Pat Dieffenbaugher. Their own story had a touch of Hollywood to it. High school sweethearts, they went separate ways after graduation, married other people, and didn't see each other for 27 years. Six years ago, when they were both single again, Carpinelli's father died, Dieffenbaugher saw it in the paper and sent her flowers, and they've been together ever since.

But the threat of unemployment hangs over their happy ending. "Our plant could close any time," said Dieffenbaugher. "I have two brothers who lost their jobs at Republic Steel." His sister's boyfriend, who works for Timken, another steel company, is now helping it set up a new plant in China. "It seems like we work better under Democrats," he said.

Republican attempts to label Democrats as the party of coastal elites clash with their real-life experience. "I find the people we know who are better off than us want Bush," says Carpinelli. "The working people are backing Kerry," Dieffenbaugher adds. One need only look at Timken's CEO, who's raised $600,000 for Bush at the same time the company is making plans to eliminate 1,300 local jobs.

There were a few Republicans around, but even many of them seemed pleased with their celebrity visitors. One antiabortion activist muttered angrily, "I can't believe they have to trot these actors out," but other Bush supporters waited in line for autographs.

"I've been a fan of yours since way back!" 24-year-old Dan Studer, a beefy guy with a crew cut and a football jersey sporting a Bush-Cheney sticker, said to Steve Buscemi. Studer and his identically dressed friend threw their arms around the actor for a photograph, and then listened intently as he asked them, "Are you happy with the way things are going in this country?"

Speaking of Kerry, Studer said, "I just don't like the way he won't take a stand on anything. He flip-flops."

In his famously wry voice, Buscemi replied, "You know what, it's the media." He proceeded to explain how Kerry's words have been distorted. As they talked, Studer nodded a few times and said, "Yeah, that's true." Buscemi gave him a flier and said, "Anyway, just think about it." Studer hugged him. "I'm a huge fan," he said. "It's great to meet you."

As he walked away, Studer said he still believed in Bush, but Buscemi "had some valid points," and said he thought some people who were undecided might be swayed by the celebs.

Meanwhile, a deputy sheriff was deep in conversation with Matt Dillon. "My wife and I went back and forth," he said. "I'm afraid of the U.N. If it was any other time..."

Dillon gave him a flier and said, "Just take a look at this." The sheriff said, "I don't want to abandon what our kids have sacrificed for over there." Then he looked at Dillon and said, "I respect what you guys are doing."

Back on the bus, Dillon seemed fairly humble about what he was doing, and aware that it might seem absurd. "I don't normally come out," he said. "I don't get that politically involved. I've not really been an activist." He seemed genuinely worked up about the economy in Ohio, though. Bush voters there "are going to be voting against themselves," he said. "I can't stomach the low minimum wage -- and now Bush wants to cut overtime! Personally, I feel strongly about John Kerry. This guy is great."