Winning on fear itself, the GOP is ready to take the country even farther right. 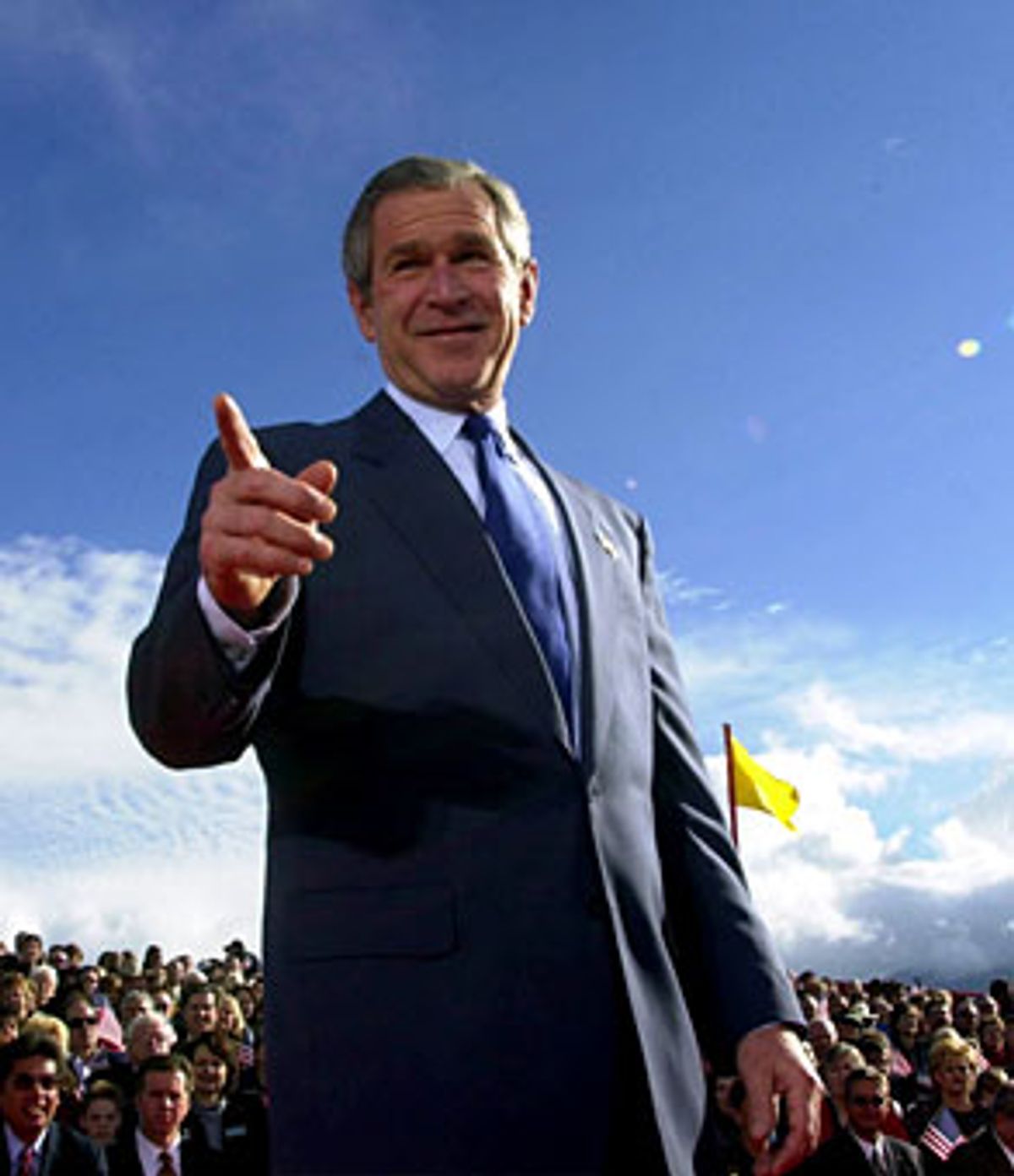 "This country is going so far to the right you are not even going to recognize it," remarked John Mitchell, President Nixon's attorney general, in 1970. Mitchell's prophecy became the mission of Nixon's College Republican president, Karl Rove, who implemented the strategy of authoritarian populism behind George W. Bush's victory.

In the aftermath, Democrats will form their ritual circular firing squad of recriminations. But, finally, the loss was not due to their candidate's personality, the flaws of this or that advisor or the party's platform. The Democrats surprised themselves at their ability to raise tens of millions of dollars, inspire hundreds of thousands of activists, spawn extensive new organizations, attract icons of popular culture and present themselves as unified around a centrist position. Expectations were not dashed. Turnout vastly increased among African-Americans and Hispanics. More than 60 percent of the newly registered voters went for John Kerry. Those concerned about the economy voted overwhelmingly for him; so did those citing the war in Iraq as an issue. But the surge of the Democrats was more than matched.

Using the White House as a machine of centripetal force, Rove spread fear and fused its elements. Fear of the besieging terrorist, appearing in Bush campaign TV ads as the shifty eyes of a swarthy man or a pack of wolves, was joined with fear of the besieging queer. Bush's announcement that he favored a constitutional amendment to ban gay marriage was underscored by referendums against it in 11 states, including Ohio -- all of which won.

The evangelical churches became instruments of political organization. Ideology was enforced as theology, turning nonconformity into sin, and the faithful, following voter guides with biblical literalism, were shepherded to the polls as though to the rapture. White Protestants, especially in the South, especially married men, gave their souls and votes for flag and cross.

The campaign was one long camp meeting, a revival. Abortion and stem cell research became a lever for prying loose white Catholics. (Rove's designated Catholic leader, his own political pontiff, had to resign in disgrace after being exposed for sexual harassment, but this was little reported and had no effect.) To help in Florida, a referendum was put on the ballot to deny young women the right to abortion without parental approval, and it galvanized evangelicals and conservative Catholics alike.

While Kerry ran on the mainstream American traditions of international cooperation and domestic investment, and transparency and rationality as essential to democratic government, Bush campaigned directly against these very ideas. At his rallies, Bush was introduced as standing for "the right God." During the closing weeks of the campaign, Bush and Cheney ridiculed internationalism, falsifying Kerry's statement about a "global test." They disdained Kerry's internationalism as effeminate, unpatriotic, a character flaw and elitist. "You can put lipstick on a pig, but it's still a pig," Vice President Cheney derided in every speech. They grafted imperial unilateralism onto provincial isolationism. Fear of the rest of the world was to be mastered with contempt for it.

These emotions were linked to what is euphemistically called "moral values," which is actually social and sexual panic over the rights of women and gender roles -- lipstick traces, indeed. Only imposing manly authority against "girlie men," girls and lurking terrorists can save the nation. Bush's TV ads featured digitally reproduced crowds of cheering soldiers, triumph of the leader through computer enhancement. Above all, the exit polls showed that "strong leader" was the primary reason Bush was supported.

Brought along with Bush is a gallery of grotesques in the Senate -- more than one of the new senators advocating capital punishment for abortion, another urging that all gay teachers be fired, yet another revealed as suffering from obvious symptoms of Alzheimer's.

The new majority is more theocratic than Republican, as Republican was previously understood; the defeat of the old moderate Republican Party is far more decisive than the loss by the Democrats. And there are no checks and balances. The terminal illness of Chief Justice William Rehnquist signals new appointments to the Supreme Court that will alter law for more than a generation. Conservative promises to dismantle constitutional law established since the New Deal will be acted upon. Roe vs. Wade will be overturned and abortion outlawed.

Now, without constraints, Bush can pursue the dreams he campaigned for -- the use of U.S. military might to bring God's gift of freedom to the world, with no more "global tests," and at home the enactment of the imperatives of "the right God." The international system of collective security forged in World War II and tempered in the Cold War is a thing of the past. The Democratic Party, despite its best efforts, has failed to rein in the radicalism sweeping the country. The world is in a state of emergency but also irrelevant. The New World, with all its power and might, stepping forth to the rescue and the liberation of the old? Goodbye to all that.