Believe it or not, a dazzlingly gaudy Vegas light display actually represents a major step forward in energy conservation. 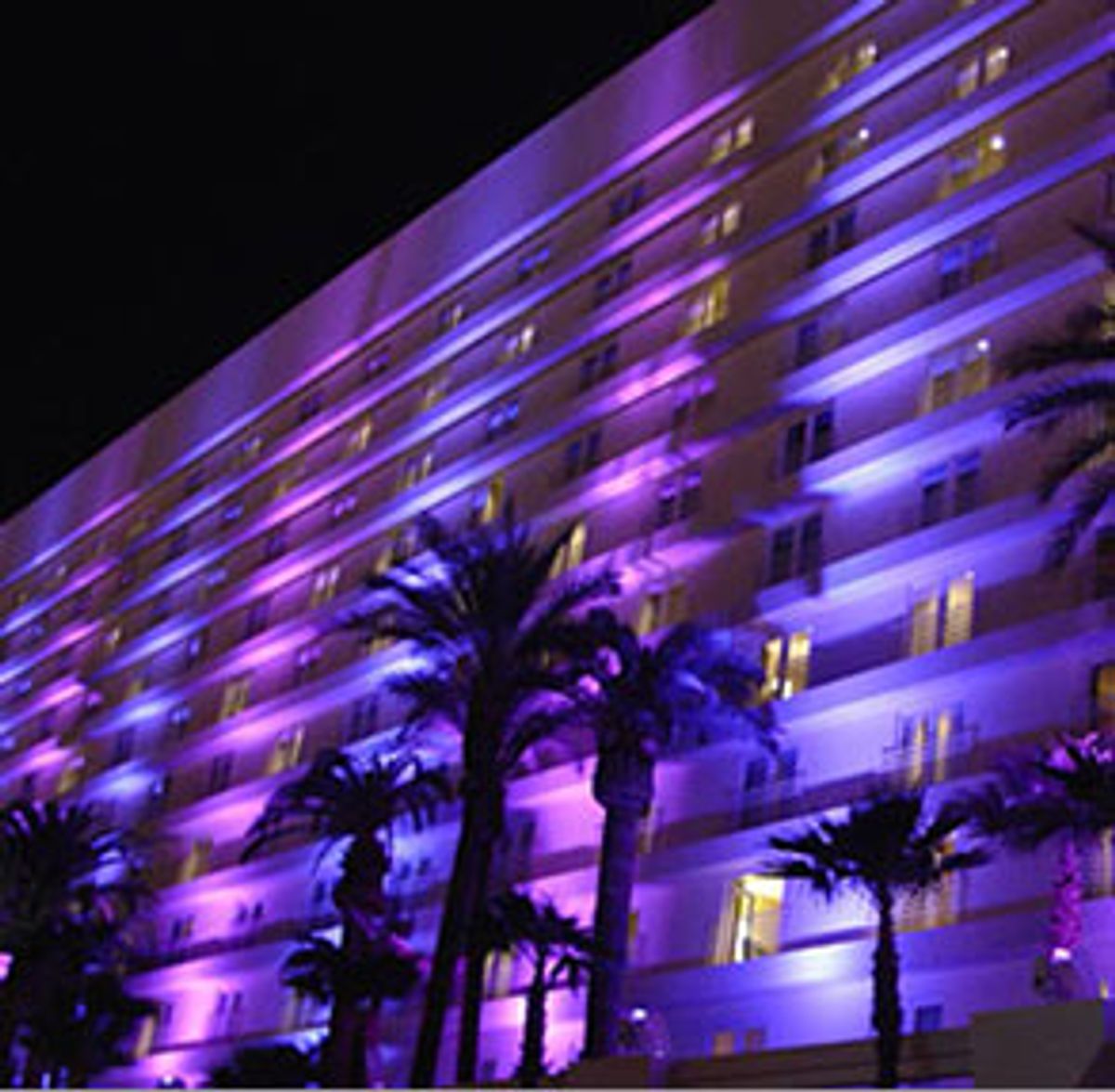 The gaudy allure of Las Vegas lies very much in its conspicuous consumption, its flagrant abuse of resources. Entire buildings are drenched in dazzling displays of color, like the 10-story façade of the Hard Rock Hotel & Casino, striped with an array of lights capable of producing 16.7 million colors. Throughout the day and night, customized light shows advertise special events and attractions in beacons of extravagance.

But the design technology behind the Hard Rock lighting is easy not just on the eyes but also on the wallet and conscience. While the original decade-old exterior lighting system racked up maintenance costs, this new lighting system is lit with light-emitting diode technology that will save the resort $41,000 per year in operational costs; an ecologist's delight, the cost of electricity for the LED system is approximately one-eighth the cost of the older system.

For those unfamiliar with the LED, it has long been the great hope in creating a more energy-efficient light bulb, but the technology has never been manipulated to create the pure white light necessary for widespread residential use and the resultant energy savings. But the technology has made leaps forward -- and its environmental virtues exploited -- by designers who are beguiled by the easy-to-manipulate light source, and it is showing up in various high-end homes and well-funded public spaces, from Boston Symphony Hall to the Grand Ole Opry and Manhattan's massive new Time Warner building.

The LED was invented in 1962 by Nick Holonyak Jr., while he was working for General Electric. "I told Reader's Digest in the 1960s that incandescent bulbs would ultimately vanish," Holonyak says today. He's not surprised that hasn't happened yet -- " science is a slow process that takes time and effort" -- but he's dazzled by the new use for his simple semiconductor diode.

The LEDs he created were used for "indicators, numerals, letters on instruments. You know when you get on the bus, and you see those little red lights flashing? I'm the person who made those. That primitive version of mine is still being used because it's so cheap to make." Everyone, of course, probably has been woken by an alarm clock with a dim red LED display. Last spring, Holonyak was awarded the Lemelson-MIT Prize for his work with diodes. Of the new uses for LEDs, he says, "It's a magnificent thing."

A designer writing in the New York Times last month proclaimed enthusiastically that recently "LEDs became the Paris Hilton of lighting, popping up everywhere" so "that interior designers like me are racing to catch up." Diode displays, not wholly unlike multicolored Vegas casinos, are lighting up shelter-magazine dining rooms, hip Manhattan restaurants, and pulsing to the beat in the country's most exclusive clubs. The Times piece also mentions that ubiquitous trend-meister Karim Rashid "embedded L.E.D.'s in the floor of Morimoto restaurant in Philadelphia" and at the Smiramis Hotel in Athens, where he "installed L.E.D.'s in the floor outside the rooms. A guest can type a message ('do not disturb' for example) on a keyboard in the room, and it will appear outside."

But LEDs aren't used just for aesthetic purposes. Virtually all companies that produce light bulbs are trying to find a way to manipulate LED technology, specifically trying to develop a white light for wide use. LEDs produce only one color, which comes in handy when a single, unfiltered color is needed -- say, for stop lights (60 percent of which are now LEDs). They tend to last longer (instead of going out every 8 to 14 months, some LED traffic systems haven't been replaced since 1996), and are 90 percent more efficient than incandescent technology. Should they be able to create a pure white light, the energy savings will be enormous.

In the meantime, the Canadian nonprofit organization Light Up the World already uses LEDs to provide light for homes in the developing world. The organization has brought its LED-based home lighting systems, which are powered by renewable energy sources, to more than 3,500 homes in Nepal, Sri Lanka, India, Pakistan, the Philippines, the Dominican Republic, Guatemala, Bolivia and Mexico, among other countries. No, it's not perfect light -- not white enough for Western standards. But the LED sources often replace kerosene lamps, which are known to cause pollution and damage the environment.

On its Web site, Light Up the World notes that lighting consumes 20 percent of the world's electricity and predicts that the LED revolution could "halve lighting-related electricity demand, massively reduce maintenance requirements and change lighting design philosophies forever." Not to mention light up a killer living room.

RESOURCES:
Lighting up at home

GELcore Tetra LED strip: While this product is mainly for commercial use, a consumer version of Tetra lighting costs about $25 and is available at several retail stores, including Wal-Mart.

For mood lighting or color-changing systems:
Color Kinetics offers "intelligent lighting systems," or LED displays that are digitally controlled. Many of these products are best suited for industrial or commercial use. Color Kinetics products for home use include:
iColor Cove: LED color and color-changing lighting effects for alcoves and accent areas.
iColor MR g2: a color-changing lamp that generates saturated bursts of color from most standard MR16 fixtures and sockets.

LightTro: an Edison-mount color-changing lamp that replaces traditional lamps in standard light fixtures, producing colors and mood-setting lighting effects (like Sunset, a wash of reds, yellows and oranges, and Eclipse, a mix of twilight blues and purples).

LightWasher: a plug-in access light to cast a changing color wash onto walls.

For information about LED Christmas lights from the U.S. Department of Energy:
Go here.

To buy LED Christmas lights (and to view an energy calculator on their waste):
Go here

This excellent industrial design blog, IDFuel, has a lighting section with consumer information, testimonials, and "where to buy" details.