The future of America is blue 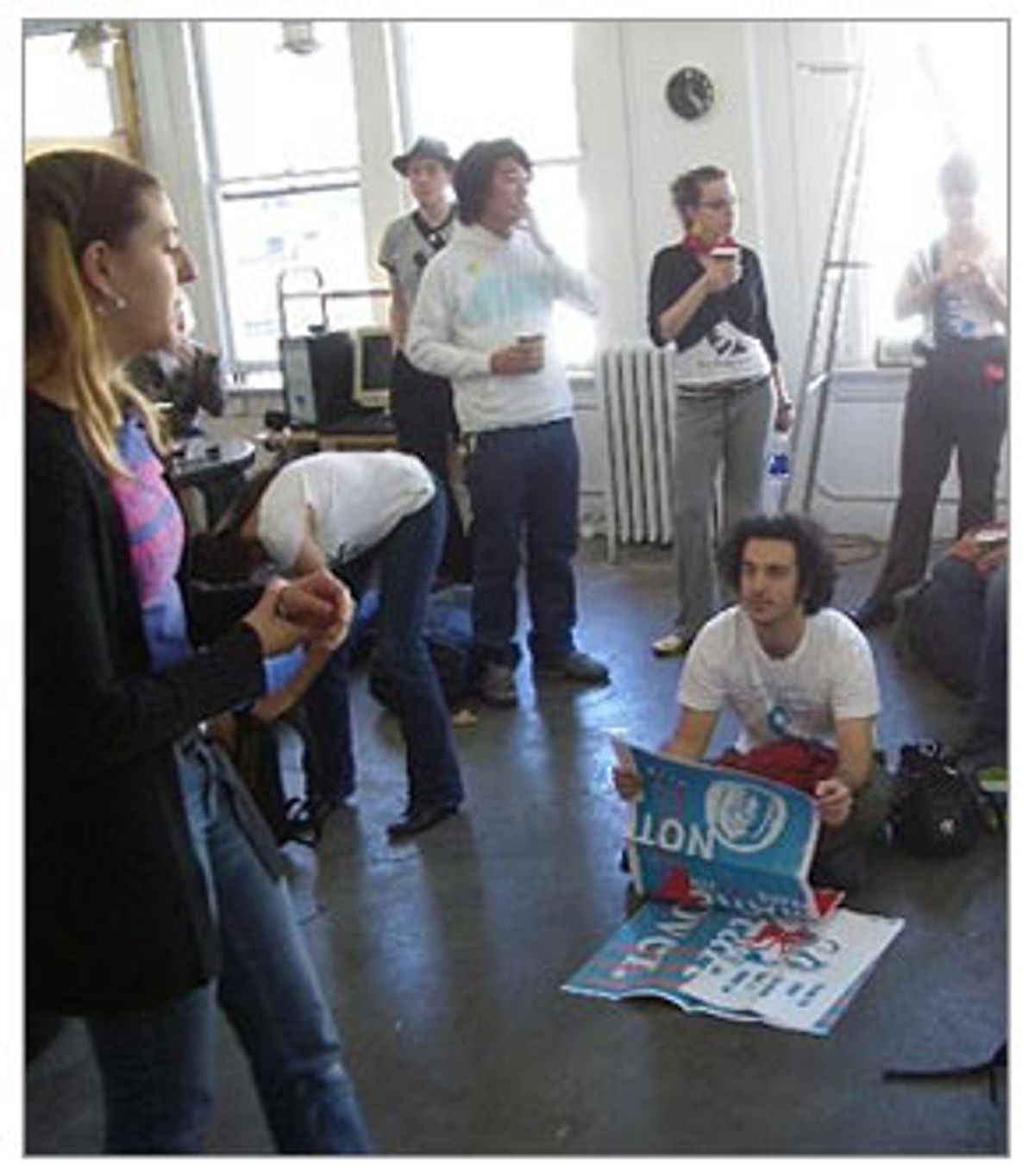 Back in the hopeful days of August, a small group of newly minted political activists gathered in an apartment on St. Marks Place in New York's East Village -- the same street where Abbie Hoffman hatched the yippie movement and Andy Warhol opened the Electric Circus. Downtown for Democracy -- an arts-affiliated political action committee staffed mostly by people in their 20s and backed by New York's cultural glitterati -- was only a year old and just getting started. The activists were discussing big plans to get out the youth vote by loading up buses of volunteers and driving to Ohio to throw DJ parties and give away free T-shirts in exchange for voter registrations and contact information. Nearly everyone in the room had never been politically active before, and some had never voted.

Conventional wisdom has it that GOTV efforts by groups like Downtown for Democracy were for naught. An Associated Press story using exit poll data circulated shortly after the election reported that as a share of the electorate, the youth vote stayed at about 18 percent, the same as in 2000. Despite the predictions of record turnout among voters ages 18 through 29, observers said, they did not go to the polls in the expected numbers. Some bloggers even blamed them for John Kerry's loss. As was the case throughout this long, excruciating election, the conventional wisdom turns out to be wrong.

According to a report by the Center for Information and Research on Civic Learning and Engagement (CIRCLE), almost 5 million more young people voted in 2004 than in 2000, an increase of 9.3 percent. The reason the youth vote as a percentage of the electorate stayed the same is simple: More people in every demographic group voted in 2004. Looking at the youth vote merely as a percentage of the overall vote to gauge their effect on the election is misleading.

"The report that young voters didn't turn out is just so wrong," says Kelly Young, executive director of 21st Century Democrats, an organization that has been working to get out the youth vote since 1985. Having started with a mere $8,000, the group is now the 13th largest PAC in the country. "The youth vote was up nationally, but that's not really the best way to measure it. In swing states, where the youth vote was really targeted, it was up even more." Some estimate it was up there by as much as 12 percent.

Although the final tally has yet to be fully dissected, 21st Century Democrats has dramatic numbers from Franklin County, Ohio, which includes Columbus, home to Ohio State University. In the precincts where the group focused most intently, the youth vote accounted for upward of 85 percent of the total vote, and Democratic turnout in those areas jumped by 128 percent. In the same precincts, the Republican turnout was up only 6 percent. "What it shows is that young voters contributed substantially to the increase in the Democratic vote. Lines at 6:30 a.m. were already an hour long, so students had to really stick with it to vote. The main voting place at Ohio State closed at 7:30. People were still voting at 9:30."

Indeed, the youth vote is the only demographic bloc that went decisively for Kerry, both nationally and in swing states. According to exit polls, young people nationwide voted 54 percent for Kerry.

Young estimates that 21st Century Democrats spent $2 million in Ohio, Minnesota, Oregon and Nevada to build a database of more than 200,000 young voters. That might seem like a lot of money per vote, but Young believes that when all the dust settles in this billion-dollar election, the youth vote will prove to have been the cheapest to get. "We spent no money on media or direct mail. It was all peer-to-peer contact. If you add up the media budget with any other demographic, I'm quite sure those votes will prove to be a lot more costly. It's been shown that the only thing that really influences a young person to vote is peer-to-peer contact, and that's relatively inexpensive."

Perhaps more important, Young believes, is that once people are engaged in the process, they'll stay engaged. "I think we've literally changed a generation," says Young. "So many people voted in this election. Once you've voted, there's no going back. What's more, it's not just those who voted, but all these great young people who are now trained organizers; once that's learned, you don't forget it."

One hopes the new activists won't be discouraged by early press reports suggesting their hard work to get peers to the polls was wasted. "There [have] been a lot of misinformed statements in the media," says Hans Reimer, Washington director for Rock the Vote. "The story came out early that young people didn't vote as expected, and people jumped on it. And that story was up for a long time when no election analysis was out yet, so it filled a vacuum. When we came along the next morning to correct it, the train had left the station. I never expected we would find ourselves spinning against the media after exceeding our goals."

Rock the Vote's goal this year was to get the youth vote back up to where it was in 1992, a high-water mark achieved by Bill Clinton, who played his saxophone on the "Arsenio Hall Show" and gamely answered the question "Boxers or briefs?" The total number of young voters this year didn't just match the number in 1992, it was up by 4 percent over that election. Reimer is concerned that the media's spin on what should have been touted as an unqualified success may lead to cynicism among the people his organization spent so much time and effort engaging in the electoral process. Reimer says Rock the Vote spent $5 million this year, expanding a database of 15,000 e-mail addresses to one with more than 700,000.

"They felt like they were excited and everywhere they looked people were voting, and then to have the media say they didn't vote, they'll feel like the whole thing was phony. But it was real. They said they were going to vote, and they did. And the skeptics are saying that they didn't. And that's a tragedy. It's one thing to be cynical about the media. It's another thing to be cynical about your peers."

With the ramifications of Bush's win just starting to sink in, organizations involved with mobilizing youth may face challenges keeping them involved. While the leaders all talk about taking their organizations down to the local level, the urgency of "the most important election in our lifetime" clearly has passed.

"Honestly, we've been saying all along this is a process," says Alexis McGill, executive director of Citizen Change, which harnessed the cachet of P. Diddy and other celebrities emblazoned with the "Vote or Die!" slogan. The newly formed group spent $4 million on its GOTV efforts, employing unique tactics, such as organizing DJs and getting their message out on mix tapes. "What we do know is that the youth vote really made the difference for Kerry's campaign," adds McGill. "The youth vote helped keep it close. I'm sure some young people will be disenchanted that he lost. But Citizen Change is going to continue. We have built an infrastructure that we're going to keep building on. We're in it for the long term."

One active volunteer with Downtown for Democracy doesn't think Kerry's loss or the media spin will deter him or the people he's worked with in the future. "I had an opportunity to work with some really amazing people," says James Ryang, a 25-year-old photographer who went on five bus trips to Ohio. "They were so motivated. I probably talked to 1,000 people, just me personally. Our organization is pretty small by comparison, and we talked to 25,000 people. I think I'm in the middle of something special with young people and politics. People who have never been involved were really passionate about changing the course of this country. And I don't think that's going to stop."