America's patrician journo-novelist goes back to college and finds -- surprise! -- the halls of academe strewn with beer cans, pizza boxes and used condoms. 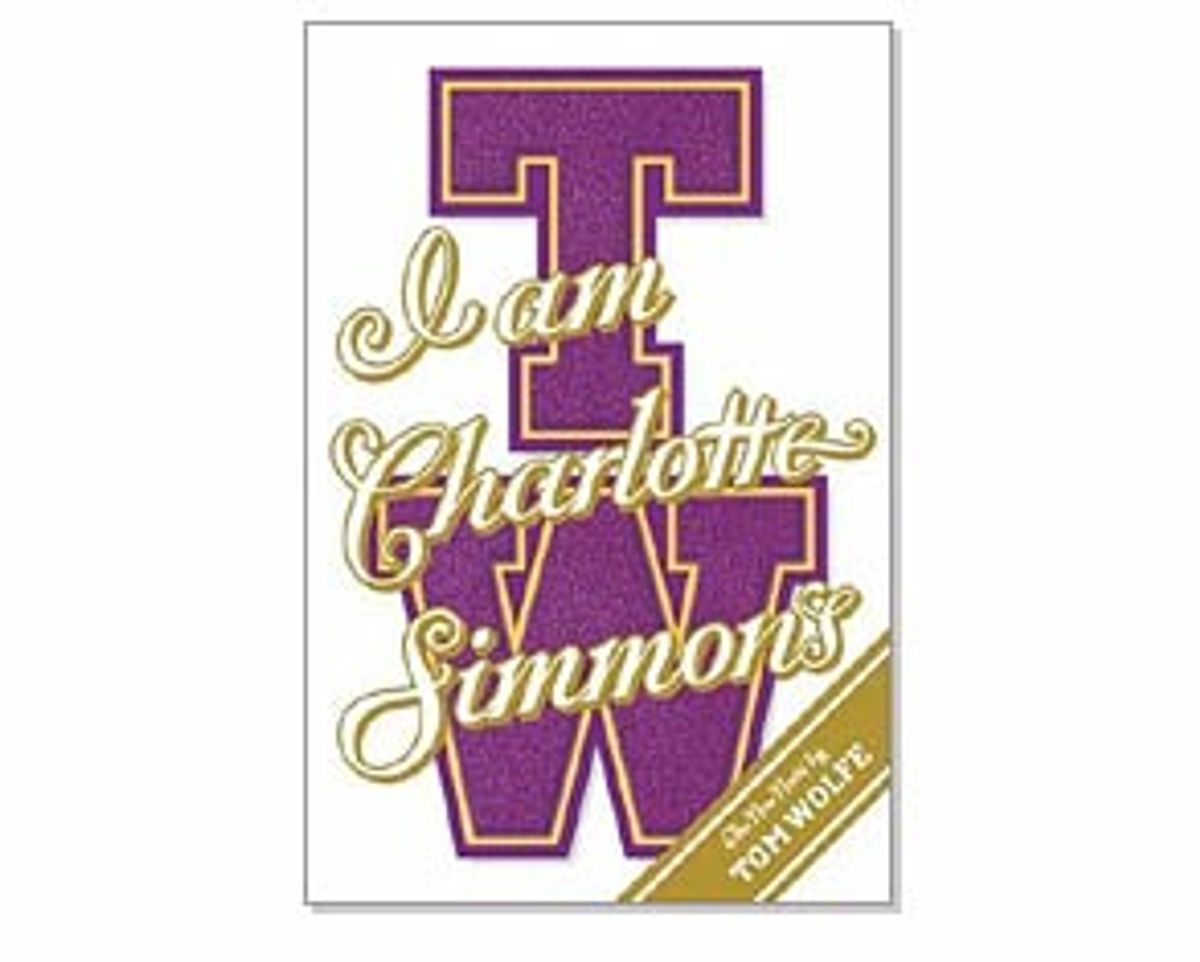 News of Tom Wolfe's latest novel started circulating long before the release date was announced; mostly, the reports contained lines like this one from the Tallahassee Democrat: "During the research phase for the novel in the late '90s, Wolfe ... ended up at 'a lot of frat parties' at the University of Florida." The image that conjures up -- of the 70ish writer in a high-collared shirt and white suit hanging against the wall at a late-night college booze fest, scribbling in his reporter's notebook while 18-year-olds did keg stands -- is not easy to get rid of once it lodges itself in your brain. (To be fair, Wolfe apparently changed into a navy blazer for his undercover missions.) And it certainly raised some doubts about the book in question. How would he ever convince his subjects to "act natural" in front of him? And what idea of collegians would he come away with?

To Wolfe's immense journalistic credit, the college experience he renders in "I Am Charlotte Simmons" is actually pretty accurate. The book is an amalgamation, of sorts, of "Animal House," "Revenge of the Nerds," "PCU" and "Old School," minus the comic pratfalls and with a heavy dose of angst. We get the "whining diversoids" turning every remark into an instance of sexism or racism, the thick-necked musclemen who live at the gym, the puking tailgaters and, most of all, the banal conversation stylings of party kids ("how-drunk-I-was stories, guy's-such-a-loser stories, can-you-believe-what-a-slut-she-is stories"). The action plays out through the scrim of Wolfe's pet theory that social pressure trumps free will, and that in college, having sex is the greatest social pressure of all.

The eponymous heroine of this tale is a freshman from Sparta, N.C., a Podunk town in the Blue Ridge Mountains. Charlotte Simmons, daughter of a devout evangelical mother and a stoic mountain-man father, star pupil and the pride and joy of her entire county, wins a scholarship to Dupont University. She is strong and proud ("I am Charlotte Simmons" is her mantra, reminding her that she is destined for great things) and filled with dreams of living "the life of the mind" at Dupont. She's also a teetotaling virgin who has never so much as seen an issue of Cosmo. It doesn't take long for us to realize that Charlotte is doomed to fall off her pedestal of purity.

The fictional Dupont itself is more Harvard or Duke than University of Florida. Situated in a grove in the middle of a slum town in Pennsylvania, it's an Eden of gardens, gazebos and majestic old buildings and statuary. It's a picturesque setting of academe, but also one of privilege, and the other girls that Charlotte first encounters, including her roommate, are rich and snotty, and they look down on her Southern accent and innocent mountain ways. Poor Charlotte is mortified by the coed bathrooms in her dorm, the stench of beer, and the foul language -- what Wolfe calls "Fuck Patois" -- of college-kid chatter. She immediately recognizes that by sticking to her moral code, she is destining herself to four years of isolation.

But Charlotte's moral code starts to adapt itself to the pressure to fit in. Within the arboreal walls of the school lurk three suitors who quickly turn Charlotte's life into the busy one of melodrama. There is Adam, the nerdy virgin who writes for the campus paper; Jojo, the tall but dimwitted basketball star; and Hoyt, the cool fraternity boy whose hobbies are -- what else? -- drinking and having sex with girls, who he and his buddies charmingly call "cum dumpsters." Jojo is the first of the guys to fall for Charlotte, and we first glimpse her through his eyes: "She wasn't beautiful in any way you usually thought about this place. He couldn't give it a name, but whatever she had was above all that." Jojo and the other two guys are attracted by Charlotte's purity, though their most immediate goal is to divest her of it. Charlotte knows her best choice is Adam, but when she gets envious looks from other girls who see her with the smarmy but handsome Hoyt, she promptly falls for the most dangerous of the three.

The boys' inner lives are injected with enough nuance and contradiction to make them feel true, although like most Wolfe-ian characters, they primarily serve as types: the Nerd, the Frat Boy, the Jock. Charlotte is a surprising exception; the first female lead character that Wolfe has ever written, she is textured and genuine. She's smart and tough but remains mostly unaware of her biggest flaws, like the fact that, despite her own loser status, she recoils at the sight of heavier or uglier girls, or the vanity that makes her hem her skirt ever higher to show off her legs, even as she's protesting against the sexual advances of her admirers.

Despite her goody-two-shoes veneer and relative innocence, Charlotte thinks and responds to people, especially men, just like any 18-year-old girl trying to get a grip on a new reality. The scenes in which she plays out her internal confusion about sex are the book's smartest and most realistic -- and therefore funniest -- moments. The first night that Adam kisses her, she clumsily tries to avoid intimacy with this guy she's not attracted to, but who she wants to keep as a friend: "Charlotte was too embarrassed -- embarrassed? -- but that was the way she felt! -- to look at his face again. So she pulled her head downward from his lips and rested it on his chest, to spare his feelings. Big mistake. This merely spurred him on to more passionate moaning."

The themes that Wolfe worked over in his first two novels, "The Bonfire of the Vanities" (1987) and "A Man in Full" (1998), are here as well, although he doesn't tackle them as directly or on such a grand scale. But race, class and the manly struggle for dominance assert themselves in the male characters' intertwining side dramas. The basketball court becomes the stage for racial tension as Jojo, one of the team's only white players, tries to assert his alpha-male status against the team's flashier and more beloved black stars. Hoyt knocks out the bodyguard of the governor of California, who is on campus for a commencement speech -- and, at the moment, receiving a blow job from a coed -- and uses the story to leverage increased status within his fraternity. And scrawny Adam rages against the moneyed and muscle-toned power of his rivals, Jojo, whom he tutors (read: writes papers for) and Hoyt, whose scandal story is the key to Adam's muckraking reportorial fame.

What makes "I Am Charlotte Simmons" less grand than Wolfe's previous novels is the setting itself. "Bonfire" swept together all of New York, and "A Man in Full" took on Atlanta's boomtown politics from the white, affluent north side to the poor black south side. In "Charlotte Simmons," Wolfe never strays from a few campus buildings, except to take us there in the first place from Charlotte's Sparta and then back home with her for Christmas break, when we see just how far from hillbilly country she has really come in a few short months. One trip to Washington, D.C., with Hoyt barely strays from the hotel room -- where, yes, Charlotte's virginal nightmare comes true.

In some ways, the narrowness of the setting -- the focus on a few elements within a subculture rather than all the cultures of a city -- works well for Wolfe; race and class issues boil underneath the main plot, popping to the surface once in a while to hint that, beyond the sexual angst, the characters are embroiled in a more terrific drama. Charlotte doesn't think much about race, but when she comes back to the dorm crying one night to find a gaggle of girls sitting in the hallway, she ignores all of their nosy questions except the black girl's, because "she had it in her mind, from social osmosis, that it was proto-racist to slough off what black students had to say." Where the characters of "Bonfire" and "A Man in Full" are stretched too thin, coming across as people who only think about race and class and status and power, Charlotte and her classmates, confined to a smaller stage, are enriched by these momentary glimpses of larger struggles.

But the problem with this particular narrow setting is that it is too familiar. Anyone who has been an undergrad in, say, the last 30 years has lived through all of this, and there's not much new to learn. It's hardly surprising that student athletes aren't quite as smart as their scholarly peers, or that frat parties are moldering caves of heavy drinking and sex, sex, sex. Any onetime freshman who foolishly believed that college would be primarily a place of academic growth will also recognize Charlotte's anxiety as her dream of "the life of the mind" slips away. It's hard to imagine whom Wolfe intended this 676-page study for, if not those who have done some time on campus, and that makes his effort all the more puzzling. One imagines Jane Goodall turning her research over to her chimps; what would they do except roll their eyes and say, "Yeah -- and?"

The only real novelty in "I Am Charlotte Simmons" is that it was written by someone as removed from the college scene as Tom Wolfe. In the details of the scenery, we're glad to have his stranger's eyes, rendering sharp observations about things we've seen perhaps too often to really notice. (In describing Hoyt's fraternity house, Wolfe writes that "the tables, magnificent old pieces that had been here ever since this huge Palladian mansion was built before the First World War, were by now riddled with dents," and the bookshelves "now held dead beer cans and empty pizza delivery boxes funky with the odor of cheese." Who can read that and not feel the loss of original purpose, how far the very idea of the university has sunk?) But Wolfe's big revelations -- that college is really all about sex, and that prudery rarely survives social pressure -- are anything but.

There's a painful scene when Charlotte arrives in Washington with Hoyt for his fraternity formal. They are with two of his frat brothers and their sorority girlfriends, who have been nothing but rude to Charlotte on the drive. Charlotte steps into the lobby of the Hyatt, the first real hotel she has ever stayed in, and is overcome by the soaring interior space. She runs outside to the car to tell the other girls about it, thrilled with her discovery: "There's this ... space, this empty space, and it goes all the way up to the roof, but it's all inside the building!" She exclaims, "Y'all oughta come see it!" One of the girls, annoyed, deadpans, "You mean an atrium?"

At the risk of sounding like a bitchy sorority girl, reading "I Am Charlotte Simmons" ultimately feels like this -- for all its charms, it's about as enlightening as staring at a hotel atrium.