"Bridget Jones: The Edge of Reason"

Yes, Renee Zellweger looks like a pathetic porker in this sequel to "Bridget Jones's Diary," but it's not her fault. 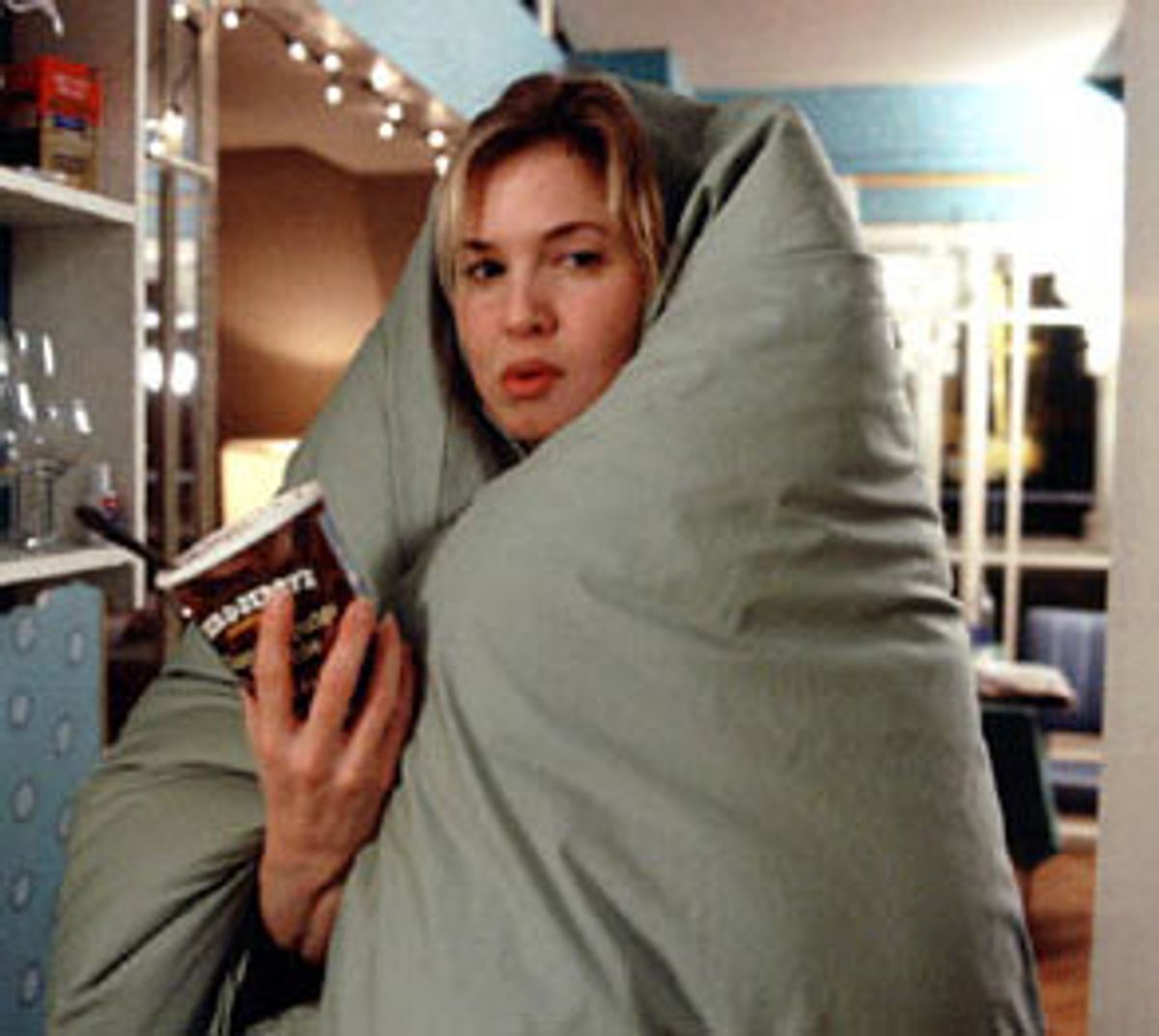 Hugh Grant trots through "Bridget Jones: The Edge of Reason" -- too well groomed to be a stray, too raffish to be a purebred -- with the confidence of a stud dog naughtily wagging his equipment at all the available lady pooches.

The first Bridget Jones movie had the same effect on Grant's screen persona as a last-minute reprieve for a dog on his way to being spayed -- it saved him from turning forever into a stammering neuter. And it did so by allowing Grant to find his inner cad. Grant succeeded in the role of the arrogant, charming and wholly untrustworthy cocksman Daniel Cleaver, as he does here, by being just a bit more raunchy than you expected him to be. He played Daniel as the type of guy that all common sense should tell you was bad news but who you couldn't help enjoying anyway. He was an irresistible shit.

In this outing, Daniel has moved from publishing to junk TV. He's the host of a show that attempts to make culture cool for the lads-mag set. The device gives Grant a chance to get off some zingers (particularly one directed at the wildly overrated painter John Currin), and he delivers them with dirty-minded aplomb. He's childishly, unreasonably funny.

At the end of "Bridget Jones's Diary" Renée Zellweger's Bridget threw over Daniel for Colin Firth's Mark Darcy, the dependable, considerate human-rights lawyer who loved her. The purpose of bringing back Grant's Daniel is to toss a wrench into the machinery of true love and make Bridget wonder if she's made the right choice. It's a measure of how off this sequel is that we wind up wondering the same thing.

For a bad movie, "Bridget Jones's Diary" lingered in the memory pleasantly. It was thrown together, had no style and was often broad enough to make you cringe. But there were enough real laughs to compensate for that broadness -- and despite the reputation Helen Fielding's novel had gotten as a whiner's lament, the picture didn't wallow in self-pity and had a good streak of disreputability. It was what used to be called racy.

"Bridget Jones: The Edge of Reason" is so clumsy and crass that it makes you doubt the pleasure of the first movie. Could it actually have been as bad as this? The self-pity the first movie avoided is in full flower here. And the picture also indulges in something the first "Bridget Jones" didn't: humiliating its heroine.

Zellweger's Bridget got into her fair share of embarrassing situations in "Diary," but the director of that film, Sharon Maguire, didn't treat her cruelly. From the get-go, the director of this picture, Beeban Kidron, does. In the opening scene, Bridget, on assignment for her TV reporter's job, sky-dives and lands in a vat of pig manure. When her cameraman is instructed to "zoom in on the sow," we're treated to a close-up of the seat of Bridget's excrement-smeared jumpsuit. That pretty much sets the tone for what follows. If there's a way to make Bridget look physically foolish, the filmmakers find it.

Anyone who wants to make the claim that women are more sensitive to female beauty than men, from here on out is going to have to contend with Beeban Kidron. Kidron shows not a trace of feeling or sensitivity to the women in front of her camera.

There's been a lot of attention paid to the weight Renée Zellweger gained for these movies. And I want to make it very clear that the problem with the way she looks in the movie is not the way she's built or the weight she's gained but the way she's shot.

I'm sure I wasn't the only man who thought the 25 pounds Zellweger added for the first movie made her look luscious. I was reminded of just how luscious when I saw the picture of her on the cover of this week's issue of the tabloid the Star, taken while she was making this movie and weighed 145 pounds. You'd think the people behind a Hollywood feature would know more about making their star look good than a paparazzo does. But in our first glimpse of Bridget here, Zellweger is photographed so that her neck seems to be swelling out from under her jaw. And her peaches-and-cream complexion is blotchy throughout. Did Kidron once look through a viewfinder while shooting this picture?

The svelte Jacinda Barrett (who's charming in an impossible role) doesn't fare much better than Zellweger. Kidron includes a shot of Barrett leaning over in a halter-top evening gown so that her breasts hang down and we can see the outline of her rib cage between them. Again, the culprit here is no more Barrett's slimness than Zellweger's weight: Barrett didn't look like this in her nude scene in "The Human Stain."

Bridget's fears about her weight are an inescapable part of the material. But the first movie gave us something Fielding's novel didn't: the chance to see Bridget through eyes other than hers. And Zellweger looked so ripe and inviting that the movie wound up doing something unexpectedly generous for the character -- it didn't allow her to be defined by her own insecurities. She may have been amazed to find a heel like Grant's Daniel making a play for her, but we weren't.

Kidron, reminding us that women can be every bit the insensitive dunderheads men can, winds up treating Bridget (and filming Zellweger) as if she really were the pathetic porker she fears herself to be. In one scene Bridget goes to a formal dinner in a tight gown that forces her to walk upstairs in the side-to-side motion of a penguin. But when you put any woman in a gown that turbans her from the waist down, even a fashion model is going to waddle when she tries to climb a flight of stairs. Zellweger appears to have been directed to move as if Bridget were so big she could barely get across the room. If Zellweger is trying to convey Bridget's discomfort with her body, then why wasn't this discomfort visible in the first movie? The body language Zellweger uses here, and, I'm afraid, everything else she does, is unaccountably broad -- it's a surprisingly bad performance.

A big part of the problem with "The Edge of Reason" is that, having won Mark Darcy, there's nowhere particularly interesting for the sequel to go. This love affair that, in the fairy tale terms of "Bridget Jones's Diary," was meant to signal the end of Bridget's insecurities, here becomes the source of a new round of insecurities. The movie is the sort of relationship comedy we've all seen before. The detours it takes (landing Bridget in a Thai prison for a stretch, an excuse for a panoply of gags about Asian female prisoners speaking pidgin English) only emphasize how little reason there is to make this movie.

The biggest threat to the movie's scheme is Hugh Grant. He's as much of a cad as last time -- more, really. When the filmmakers choose to have him leave Bridget in a moment when she is clearly in danger, they overreach. Daniel is a bastard, but he's not a monster. Yet I couldn't get over the sneaking suspicion that Grant's character is present here not just to tempt Bridget but to mollify us.

Colin Firth can be very appealing, especially when he allows a sly smile to crack his deadpan exterior. He can also seem too recessive an actor, and here the camera catches him standing off to the side looking beetle-browed once too often. You don't doubt for a second that Darcy will be a good, faithful boyfriend, but he makes it seem that dinner with him would be an eternity, let alone a lifetime. Is it too much to ask that Firth be allowed to show a little life and sexiness along with his sincerity? Many good, unexciting men have driven many women straight into the arms of cads. Whenever Grant appears, you understand why.