Respectful and bland, this biopic about revolutionary sex researcher Alfred Kinsey is about as exciting as a date with grandma. 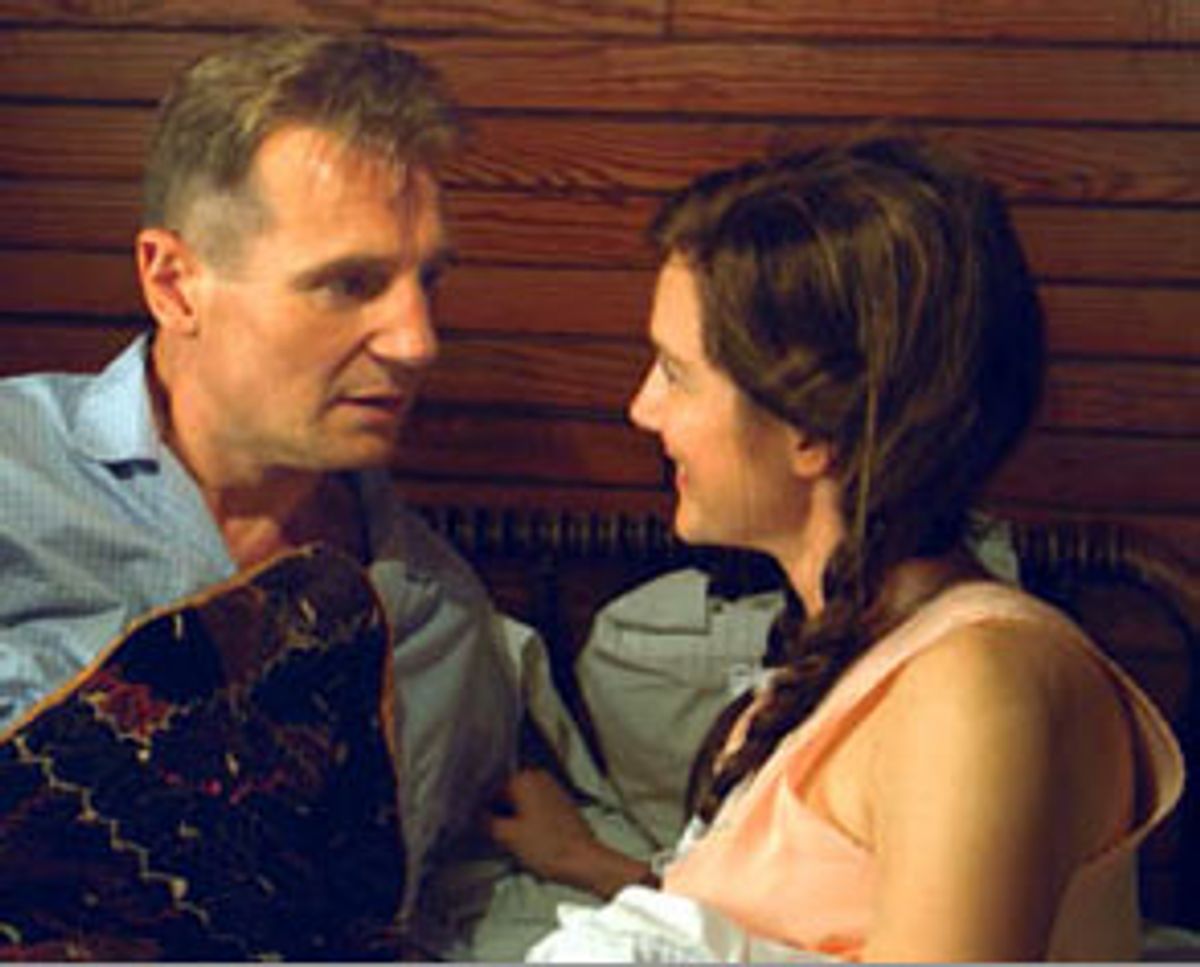 The air of eager earnestness that hovers around "Kinsey," Bill Condon's more-or-less biopic of revolutionary sex researcher Alfred Kinsey, sometimes makes you wonder if the whole thing isn't a joke. When Laura Linney, as Kinsey's wife-to-be Clara McMillen, or "Mac," approaches the shy Indiana University zoology professor, played by Liam Neeson, and announces, "I've been reading up on gall wasps -- I think I know why they appeal to you," we know we're in for a wild ride.

These are exceptional human beings destined for exceptional achievements, and Condon treats them almost as if they were rock stars -- oxford-wearing, pointy-headed rock stars, but rock stars nonetheless. His worshipful awe is occasionally broken by a crisp revelation, as when two of Kinsey's researchers, played by Peter Sarsgaard and Timothy Hutton, break into a scuffle after one sleeps with the other's wife (all for the sake of science, of course) and Kinsey professes childlike surprise that sex can't always be divorced from emotion. In the world of "Kinsey," Alfred Kinsey is something of a folk hero, laying pipe for the sexual revolution, one fuck at a time.

You don't need to know much about the real Kinsey to sense that the one we're getting here is both more palatable and less interesting than the real thing. Kinsey was born in 1894 in Hoboken, N.J., the son of a Methodist minister. (John Lithgow plays Daddy Kinsey in the movie, delivering an unintentionally hilarious sermon about the evils of the zipper fastener.) Kinsey studied biology and psychology at Bowdoin College, and went on to become an assistant professor of zoology at Indiana University. By the late '30s, he was teaching a marriage course at the university, revolutionary in that it dealt with sex straightforwardly at a time when young people still got much of their information (or, more accurately, misinformation) from old wives' tales. Kinsey went on to devise an interviewing technique that would help him and his researchers collect the sex histories of thousands of individuals across the country, a way of finding out, to an extent, what people really do behind closed doors.

Condon ("Gods and Monsters") covers those basics, but his tone is gentle and lifeless and at times baffling: The picture is a weird cross between clinical and whimsical. To give us a sense of how many people Kinsey and his team queried, Condon shows us a map graphic dotted with the yakking heads of questionnaire respondents and crisscrossing lines between cities (Cheyenne! Denver! Springfield!).

And he skates delicately around some of the more controversial aspects of Kinsey's work. When Neeson's Kinsey sits down to take the history of a man who has had thousands of partners, quite a few of them children, the researcher accompanying him (played by Chris O'Donnell) leaves in disgust, while Kinsey remains, calmly though not approvingly forging ahead with the questioning. This is science, after all, and so Condon films the scene with bland dispassion, ostensibly so we can make up our own minds about it. That seemingly correct approach is really just a cop-out -- you may as well have a dead fish behind the camera instead of a person. (In filmmaking, having a point of view isn't a sin; in fact, the flatness of not having one only makes you boring.)

Condon wants to make the case that the world needed Kinsey's work, and it did, given the extent that, pre-Kinsey, young people often believed, for example, that giving oral sex to a woman would render her sterile. But this Kinsey, particularly as Neeson plays him, is essentially a tweedy cuddlebug with a homosexual bent and some interesting ideas about heterosexual relations. For the worse and not for better, he's Kinsey with no balls.

Even though neither the script nor the direction do him any favors, Neeson is a huge part of the problem: He slouches through the movie wearing an expression of bland benevolence with his scholarly woolens. Neeson can be a sensitive, reflective actor, but he tends to be a recessive one, and here, instead of giving the movie a center, he only seems to amplify its negative space.

In one scene, circa the mid-'50s (Kinsey died of heart failure in 1956), Mac finds him in the bathroom after he's punctured his own foreskin to find out what kind of sensation it would produce. She's shocked, as a sensible person would be, whereas Neeson's Kinsey stares at her with the muted gaze of a wounded lamb. Again, Condon presents the scene with stupefying blankness -- we're supposed to intuit that we're seeing an image of human frailty and encroaching insanity, and while we get the idea, all right, the scene makes us feel nothing, except, perhaps, disbelief tinged with revulsion.

Much of "Kinsey" is intentionally funny -- Condon can't help addressing the anti-masturbation "advice" given in the old Boy Scout Handbook with a self-conscious smirk, as if it needed that -- but the funniest bits are the ones you're not supposed to laugh at. At one point, in voice-over, Neeson reflects on his childhood love of the forest, which led to his career in science. "Biology! The science of life!" he exclaims with the same gusto that Eddie Albert gave the words "Fresh air!" in the theme song to "Green Acres."

A few performers struggle valiantly to give the material some much-needed texture: Linney is wonderful in an early courtship scene where Kinsey presents her with a pair of lace-up clodhoppers as a gift. (She's thrilled with this dumb present, and claps the shoes against her beau's chest with unbridled delight.) Peter Sarsgaard gives his character more ripples of subtlety than the script probably called for, and also pulls off a fearless full-frontal scene. But the most effective part of "Kinsey" may be the end credits, which feature film footage of crazily mating animals, including porcupines. The subtext is that love hurts, and sometimes sex does too. It's the only good stiff poke we get from this dopily lifeless picture.