How to indulge in beautifully designed wood furniture and keep your tree-loving conscience (mostly) clean. 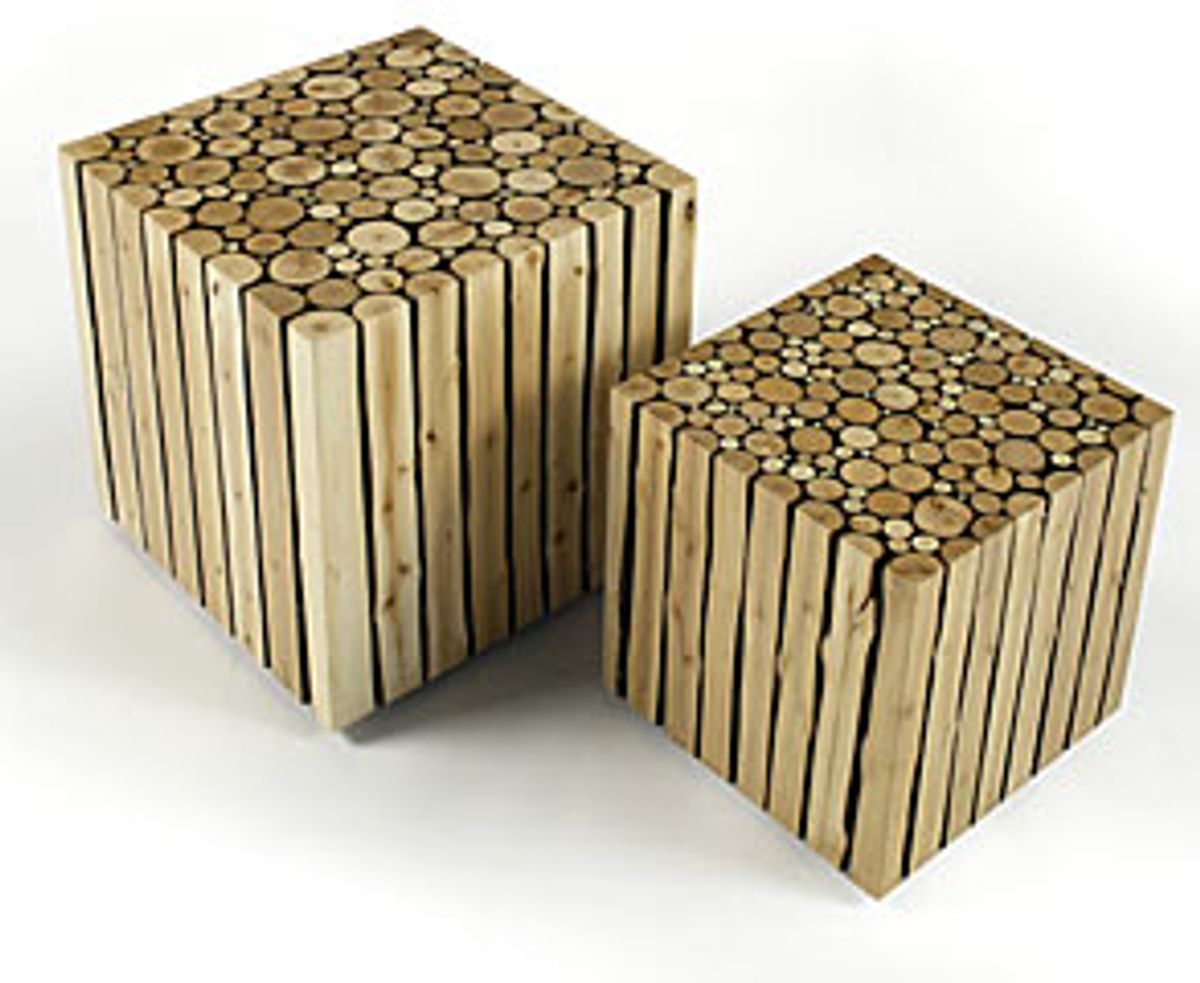 Some of you readers may, like me, think that a dramatic fiscal crisis is the only event powerful enough to persuade certain les états rouges to rethink their voting style. To that end, you're planning on curtailing all shopping for the next four years to help speed the economy along a downhill slide.

But perhaps we're being too hasty. Voting with our dollars may be one of the few proactive pleasures around right now. It is reassuring to know that a little enlightened consumerism, however small a drop in the global economic bucket, can help support alternatives to everything hateful in the world: deforestation, Wal-Mart creep, generica, corporate crap, golf (well, maybe nothing can stop that...). Let's quickly turn to thoughts of metaphorically greener pastures that got that way without sucking up 1 million cubic meters of water a year (the golf course average), like the very happy-making reclaimed wood furniture movement.

Reclaimed wood has been diverted from the waste stream. (Considering forests may soon be scarcer than diamonds it is shocking to consider how frequently people chuck wood in the garbage or burn it). It's one of the categories accepted under the Rainforest Alliance's SmartWood label, a certification accredited by the Forest Stewardship Council that lets individuals and companies know what they buy isn't from clear cuts, or endangered rainforests, and comes from sustainable tree and bamboo farms that profit local communities. Unfortunately, only a small percentage of wood sold in the United States is stamped, but the idea is catching on. Last year, the Action Sports community (aka Xtreme athletes) learned about FSC and decided to use 90 percent SmartWood in their ramps. Starbucks decorates their stores with SmartWood, and some chain stores -- such as Cost Plus World Imports, Smith and Hawken and Ikea -- source some SmartWood furniture.

For those of us hung up on the second of the three Rs, reclaimed SmartWood offers a particular satisfaction. And, not only does it involve rigorous reuse, it also, because of the irregular nature of found wood, requires that milling and building be done on a smaller scale, so consumers are supporting the local, or at least national, non-mega corporation economy.

For the past decade, small lumber companies like Pioneer Millworks and TerraMai have been combing the globe, finding railroad cars in Southeast Asia or rafters from a demolished 1930s General Motors plant in Buffalo, N.Y., and turning them into plank floors and beams. In Northern California craftsman transform reclaimed wood into Arts and Crafts furniture (Whit McLeod) and shaker tables (Wooden Duck) using old-school woodworking methods.

I have to confess having a love/hate response to the reclaimed wood industry. I love the idea of salvaging something earmarked for destruction, and I romanticize to no end these entrepreneurial modern-day Adam Bedes with hearts of gold who can actually do things with their hands other than wring them in panic over the environmental crises, obsessively wash plastic takeout containers in the company washroom, and write checks to the NRDC.

The byproducts, though, depress me slightly. I imagine boomers building 4,000-square-foot second homes in Colorado smug in the fact that their beams came from railroad trellises in Thailand. Obviously better than a cheap faux colonial in a gated community that's going to collapse in 20 years after giving the occupants cancer from off-gasing, but couldn't those boomers have just given the land to the Nature Conservancy and stayed in the small-footprint city? The wood's history also serves as a sad reminder that we're losing or mutating beyond recognition so many beautiful buildings and structures -- factories, bridges -- so quickly. The repurposed wood can never be as gorgeous as it was in its first iteration, where it took on the organicity bestowed by time. A reclaimed floor signifies postlapsarian tragedy, saying: "You no longer live in a world where an old barn could sit in a field doing nothing but rotting and looking scenic, where cheap tenement housing had better wood and craftsmanship than the most überluxe mansion built today, and you never will again!"

To find really ambivalence-free shopping, you have to delve deeper into the reclaimed wood movement to a small group of furniture designers who get involved locally with the actual sourcing of their wood, and are as concerned with pushing design forward as they are conservation. People like Brent Comber from Vancouver, British Columbia, whose elegant side table of alder trunks bonded vertically into a clean 16-by-16-inch or 20-by-20-inch cube has been picked up by British lifestyle guru Joseph Conran for his Conran stores as well as II HK, a new store in Manhattan that sells only environmentally progressive products that also, hopefully, have a strong original aesthetic.

"It's a constant struggle to find things for the store that aren't reminiscent of hippie," explains James Kloiber, who was grateful to discover Comber's tables.

Stephen Mitchell, the owner of Sublime in Tribeca, which showcases American design, also struggles to find products. He got interested in looking for alternatives after trying to develop a couch with the Sublime label, and learning about the huge amount of waste that goes into making new furniture. "Most of the stuff I see at the furniture fairs that's reclaimed just isn't exciting, design-wise," he says. He's carrying Joseph Hauptman's reSeat compressed wasteboard mid-century modernesque chairs, a bed by Richmond, Va., woodworker Anthony Brozna made from a storm-felled 100-year-old walnut tree from playgirl-heiress Doris Duke's estate in New Jersey, and pieces from Scrapile by Bert Bettencourt and Carlos Salgado.

About a year ago, Brooklyn-based Bettencourt, a self-taught furniture maker with a degree in English, and his collaborator, fine-arts trained Carlos Salgado, started fooling around with the scrap wood leftover from an old project in Bettencourt's Williamsburg studio. Creating a closed system of reduce/reuse had become particularly alluring. The two were already interested in sustainable materials, and had devoted part of their business to distributing wheat and sesame board -- materials they had had a hard time getting access to when they started going eco -- and making bamboo furniture for clients like fashion designer Donna Karan. Bettencourt and Salgado treated the variously sized chunks of wood like children's building blocks, with a functional piece of furniture the finished puzzle. Using low-formaldehyde glue that doesn't off-gas, they built a minimalist coffee table whose only decoration was the geometric adherence lines between the blocks. They built a few more. The pieces sold quickly from their studio and a few local stores, and pretty soon they were out of scrap.

"We learned about New York Waste, an organization that tries to match a business up with another businesses' waste," explains Bettencourt. There were several larger manufacturers with excess scrap, so the duo just had to show up on garbage day and load up their van from the dumpsters.

"[Piano manufacturer] Steinway is one of the best places -- they have such high-quality wood," says Bettencourt.

"When you see them grouped together, the pieces have a real visual integrity," says Mitchell. Now, as stores in Chicago, and Argentina are placing order and tables, benches, bookshelves, lamps and stools sell at II HK, Future Perfect in Williamsburg, and Twentieth in Los Angeles for prices ranging from $375 to $3,800, it's time they are short on.

Part of the appeal of buying this furniture is the idea that by working with unwanted wood you've hunted down, you are in some way returning to a more indigenous, direct relationship to nature. Anthony Brozna has found a guy in New Jersey who picks up logs as a hobby, like the one from Duke's estate, and calls him when he gets a choice stray then cuts it custom based on the grain and quality of that find. Because he's working with small batches, Brozna can air-dry the wood in his studio, as opposed to the usual kiln-baked process that's used by mass producers and reclaimed companies making wood floors and building lumber. "Air-dried wood is much more brilliant and retains more of its original properties," says Brozna.

While Brozna was working as a concierge at the Pierre Hotel in Manhattan -- a felicitous day job for any artisan in need of wealthy patrons -- he began building furniture on the side sourcing supplies from urban lumberyards. Then the book "Cradle-to-Cradle: Remaking the Way We Make Things," by architects William McDonough and Michael Braungart, inspired him to find other options. He got his first big break when the philanthropists Ken Kuchin and Bruce Anderson, who have an apartment at the Pierre as well as a house in the Village, asked him to make custom furniture for their Preston Phillips-designed Hampton's cottage.

"I used entirely reclaimed ash and cherry for built-in bookshelves, beds and coffee tables," he says. The house was featured in Elle Décor and recently, the Fine Living network, as a cutting edge country dwelling. The socialite and newly anointed fashion designer Tory Burch also bought pieces for her Pierre apartment.

Now, Brozna is finishing up a commission for deco tables and a reception desk for the Richmond brasserie Can Can, owned by Christopher Ripp (ex-chef at Bouley, Jean George and Danube) opening in December as well as trying to complete a more affordable line that he will debut at the 2005 International Contemporary Furniture Fair in Manhattan next Spring. His prices start at $500 for an end table and go up to $10,000 for an armoire. "I don't ever want to be a big shop, pumping out multiple pieces, but I want to find a way to get this to people that's affordable," he says.

Of course, you could argue that no one really needs to buy new furniture when so many thrilling vintage and antique options already exist. Bert Bettencourt's answer: "Sure, it's always better to use what's already there, but a lot of people are uncomfortable with anything but new furniture. So if that's going to be the case, I think it's very important to be involved in a dialogue that offers new smarter alternatives while directly engaging with current design." Who can argue with an English major turned builder who has found a way to transform Steinway Piano Co.'s castoff chips into sleek tables? Let's go shopping!