Bush's night of the long knives

The fall of Powell and the rise of Rice reveal the true face of this strange, Soviet administration, where bureaucratic fear and blind loyalty reign supreme. 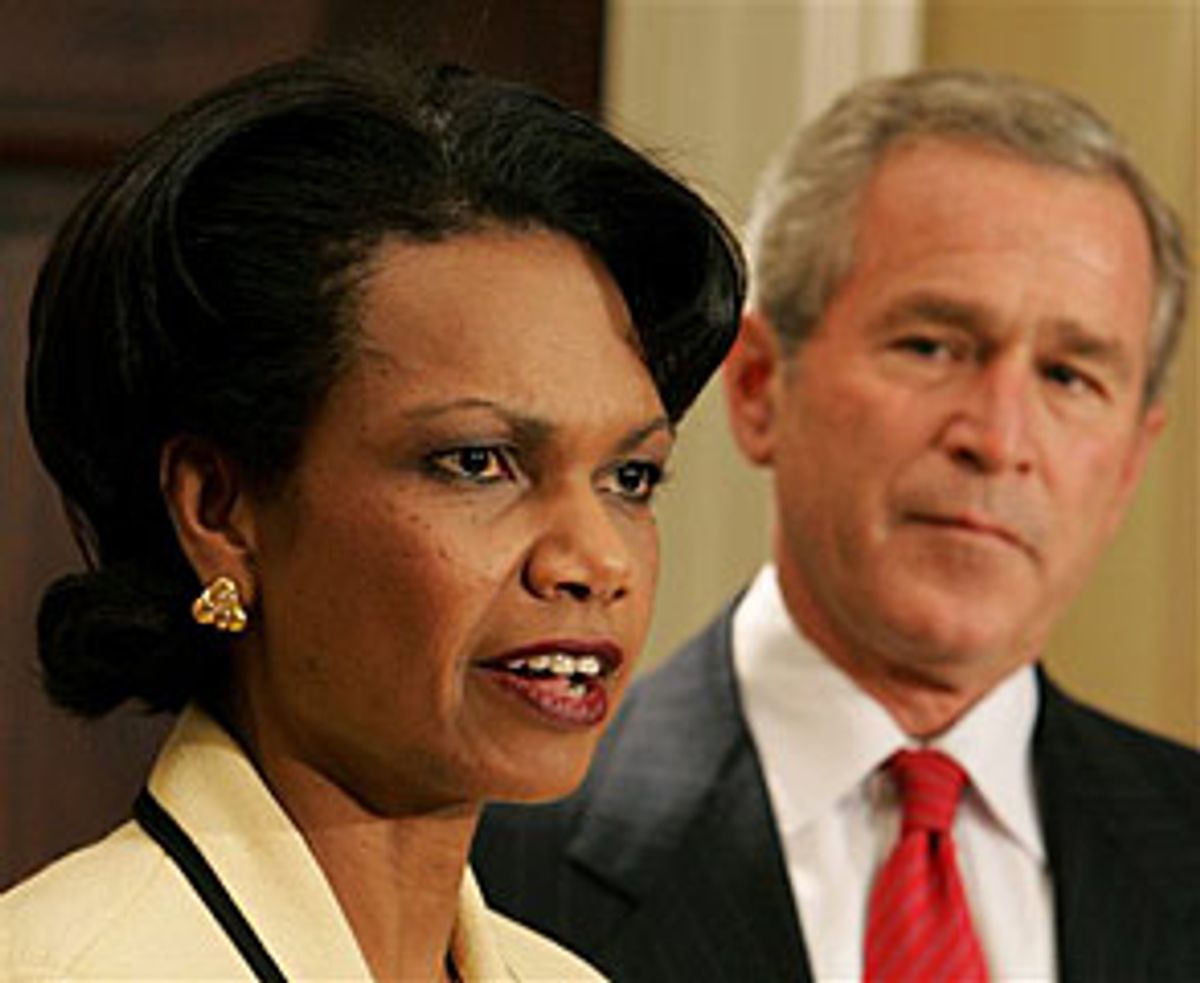 Colin Powell's final scene as secretary of state was a poignant but harsh reenactment of his self-delusion and humiliation. The former general held in his head an idea of himself as sacrificing and disciplined. But the good soldier was dismissed at last by his commander in chief as a bad egg. President Bush, Vice President Cheney and Secretary of Defense Rumsfeld regarded him either as useful tool or vain obstructionist. They deployed his reputation as the most popular man in America and the most credible face of the United States for their own ends, and when he contributed an independent view he was isolated and undermined.

Powell has been a peripheral figure, even as a fig leaf, ever since his climactic moment before the United Nations Security Council, on which he staked his credibility, when he presented the case that weapons of mass destruction in Iraq required going to war, consisting of 26 falsehoods, and about which he later claimed he had been "deceived." When the statue of Saddam Hussein was toppled, he offered the president the 17 volumes of his "Future of Iraq" project, but it was instantly rejected. Having predicted everything from the looting to the insurgency, and how they might be avoided, the "Future of Iraq" was politically incorrect.

Powell had wanted to stay on for six months of Bush's second term to help shepherd a new Middle East peace process, but the president insisted on his swift resignation. Immediately, Condoleezza Rice was named in his place. She had failed at every important task as national security advisor, pointedly neglecting terrorism before Sept. 11, enthusiastically parroting the false claim that Saddam had a nuclear weapons program (while suppressing contrary intelligence), mismanaging her part of postwar policy so completely that she had to cede it to a deputy, and eviscerating the Middle East "road map."

But Bush's performance princess was his favorite briefer; ever devoted, the unmarried Rice in an unguarded moment once called Bush "my husband." As incompetent as she was at her actual job, she was as agile at bureaucratic positioning. Early on she figured out how to align with the neoconservatives and to damage Powell. Her usurpation is a lesson to him in blind ambition and loyalty.

Powell's sack and Rice's promotion are more than examples of behavior punished and rewarded. His fall and her rise signal the purge of the CIA and the State Department -- a neoconservative night of the long knives. Bush's attitude is that of the intimidating loyalty enforcer he was in his father's political campaigns.

The CIA is not forgiven for failing to support Cheney's phantasmagorical case linking Saddam to al-Qaida. And the release in September of the outline of the most recent National Intelligence Estimate, laying out dark scenarios for Iraq, was considered an act of rank insubordination intended to help oust Bush in the election. The new CIA director, Porter Goss, a former Republican House member, has installed highly partisan aides at the top of the agency, and several senior officials have been summarily fired. He has issued a party line diktat that the CIA's mission is to "support the administration and its policies."

At the State Department, senior career officers, especially those who have been close to Powell, believe they are next on the chopping block. Indeed, Bush has charged Rice with bringing State "under control." Its Bureau of Intelligence and Research, which has provided the most accurate analysis of Iraq, is a special target for purging. Cheney is heavily involved in the planning, and he intends to fill key slots with neoconservatives and fellow travelers. "By the time she takes over, Rice will have been maneuvered into a prestructured department staff," one State Department source who has been close to Powell told me.

The dictation of a political line has conquered policymaking. Since the United States emerged as a world power, the executive, because of immense responsibilities and powers, has relied upon impartial information and analysis from its departments and agencies. But vindictiveness against the institutions of government based on expertise, evidence and experience is clearing the way for the intellectual standards and cooked conclusions of right-wing think tanks and those appointees who emerge from them.

In this strange Soviet Washington, a system of bureaucratic fear and one-party allegiance has been created in which only loyalists are rewarded. Rice stands as the model. One can never be too loyal. And the loyalists compete to outdo each other. Dissonant information is seen as motivated to injure the president -- disloyalty bordering on treason. Success is defined as support for the political line, failure as departure from the line. An atmosphere of personal vendetta and an incentive system for suppressing realities prevail. This is not an administration; it does not administer -- it is a regime.

On one of Powell's recent futile diplomatic trips, his informal conversation with reporters turned to a new book, "The Accidental American: Tony Blair and the Presidency" by James Naughtie, BBC Radio 4's "Today" show host. In the book, Powell is quoted as describing the neoconservatives to British Foreign Minister Jack Straw as "fucking crazies." That, the reporters suggested, might be an apt title for his next volume of memoirs. Powell laughed uncontrollably.