How those eerily beautiful bubble cars in "The Incredibles" may well appear in our not-too-distant future. 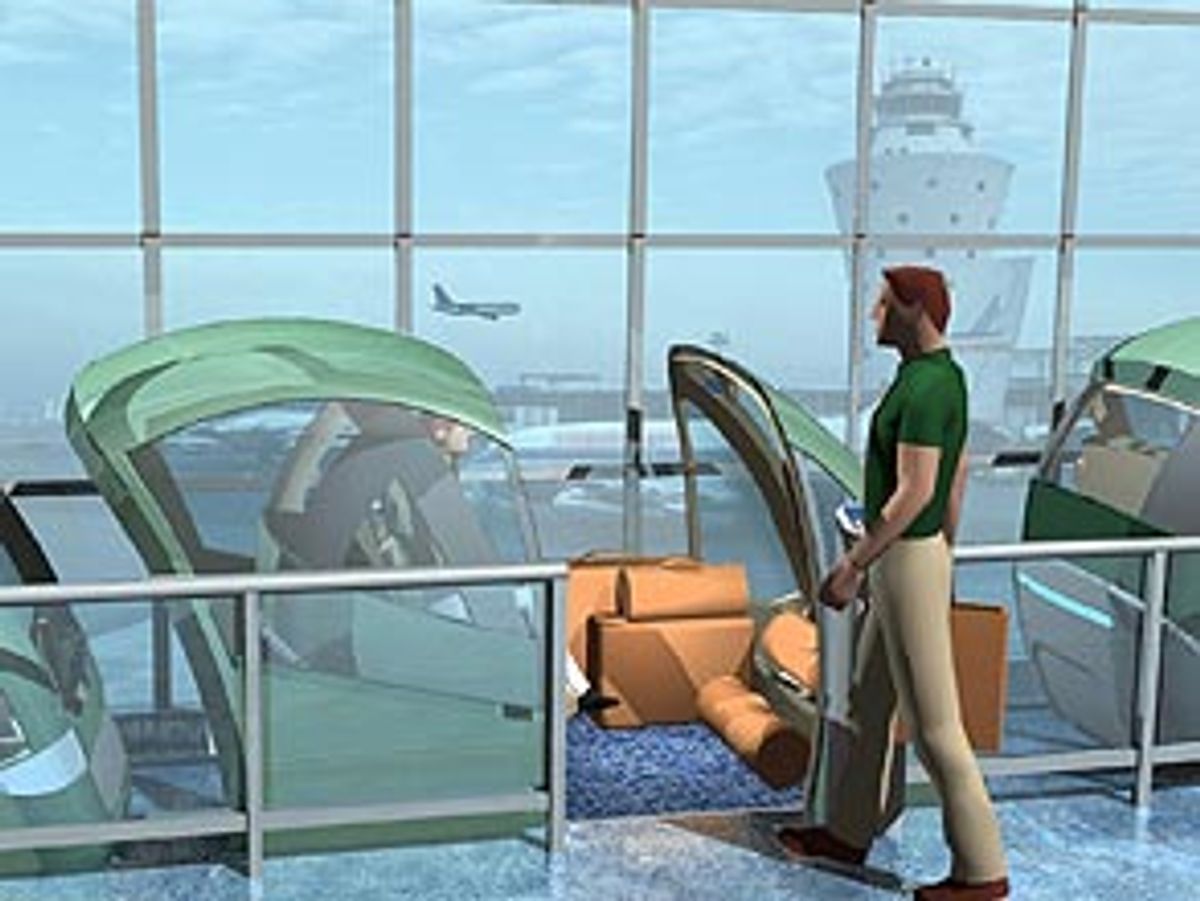 In "The Incredibles," the eponymous superhero family spends much of the movie trying to either escape or infiltrate the villain's high-tech island lair. Among the creepy sci-fi elements -- parrots with camera eyes, a destructive robot that can strategize -- is the beautifully eerie monorail that silently glides around the volcano, transporting the villain's henchmen in small round cars. The heroes occasionally hitch a ride on one of these moving pods while battling the forces of evil.

In real life, we may not have superheroes, but soon we will have those little monorail cars, zipping commuters and shoppers (and maybe an occasional henchman) from point A to point B. They're part of a system called Personal Rapid Transit, or PRT, which is poised to replace the more expensive, less environmentally friendly and frequently less convenient mass transit systems of old.

What really makes PRT different from mass transit is that it combines the convenience and luxury of a taxi with the efficiency of subway and bus travel: Rather than packing into a large carriage with a hundred smelly strangers, with PRT you get a private car. Instead of stopping at every station on the line, you zip straight to your final destination. And the visual impact -- replacing the bulky steel trains and buses with sleek bubbles that look like mid-century creations from the designer Arne Jacobsen -- appeals to any kid who dreamt of being a Jetson, or now, an Incredible.

Leading the way in the PRT revolution is the Minnesota-based Taxi 2000 Corporation, founded in 1983 by Dr. J. Edward Anderson, a former NASA engineer who turned his attention to transit in 1968. After studying the problems with conventional mass transit, he developed SkyWeb Express, which is poised to be the first commercial PRT system in the world.

Anderson claims SkyWeb Express beats mass transit in every way: It's greener, more convenient, safer and visually more acceptable, since the cars and rail are streamlined and small (observe this comparison between the New York subway and a SkyWeb system). The cars, unlike the round pods in "The Incredibles," are egg-shaped, and allow enough room for three to four people plus their shopping bags, luggage and wheelchair or bicycle. They run on synthetic rubber tires, which reduce noise pollution, along a monorail guideway that's 3 feet wide by 3 feet deep. And because the system is powered by 600-volt DC electricity, it produces no emissions.

As Taxi 2000 imagines the scenario, commuters would enter the station, purchase a fare card and head to the platform -- just as one does now with most rail systems. But instead of waiting for a train to come by, passengers would hop into one of the empty cars that are idling in the station, swipe their card and enter a destination code. Because stations are positioned "offline" -- that is, the rail runs next to the station, not through it -- cars can pull into stops without slowing down traffic.

SkyWeb Express may also be the answer to the seemingly impossible quandary that every environmental advocate faces: how to make green technologies cost-effective. Taxi 2000 estimates that installation of SkyWeb Express would cost $10 million per mile -- nearly five times less than the cost of light rail and 10 times less than heavy rail. And operating costs at 38 cents per passenger mile (compared to $3.43 for heavy rail and $1.42 for light rail) mean that SkyWeb Express could operate on a break-even basis -- and therefore without the government subsidies that mass transit, which operates at a loss, relies on. The guideway also weighs less and is easier to assemble than light or heavy rail, and in fact the guideway can be installed by an ordinary fork-lift truck, only minimally disrupting regular traffic and therefore reducing the incidental costs of major construction.

Public transit, obviously, is already a huge environmental improvement over automobiles. According to the American Public Transportation Association, mass transit uses one half of the fuel consumed by automobiles for every passenger mile, and one third of that used by SUVs and light trucks. But buses and rail are far from independent of oil. In 2002, buses consumed more than 660 million gallons of fuel nationally, 80 percent of which was diesel. Light rail consumed 8,000 gallons of diesel gas and more than 500 millions kilowatt hours of electricity, and heavy rail, though not reliant on gasoline, consumed more than three and a half billion kilowatt hours of electricity. Depending on what region you live in, that electricity could come from coal and gas plants, rather than from a renewable source. Comparatively, SkyWeb fares better. No fuel is needed other than electricity, and it uses less electricity than other rail systems.

Mass transit also suffers from another big problem: Because of decreased ridership, it is at times less efficient than cars. According to U.S. Department of Energy data, in the year 2000, buses consumed 4,775 BTUs of energy per passenger mile, whereas cars only consumed 3,543. The problem is that buses run empty for most of the day, wasting energy. Trains are actually more efficient than cars, coming in at 3,105 BTUs per passenger mile, but that data is probably skewed by the New York City subway and commuter trains that only run at peak hours.

Jeral Poskey, Taxi 2000's director of applications and the person in charge of launching the company's short-term goals, doesn't see mass transit's situation as a permanent problem. "The good news for rail and bus is that getting new riders doesn't require expending new energy," he says, "so if we can increase ridership we increase their efficiency." The premise that SkyWeb Express is based on, and the idea behind all PRTs, really, is that it can greatly increase ridership. In terms of efficiency, Taxi 2000 estimates that it will attract enough riders that its PRT will end up using a fifth of the energy per passenger mile of urban buses or light rail, and a fourth that of metropolitan heavy rail.

The PRT system boasts a ton of other benefits as well. It's fast -- SkyWeb cars can move anywhere from 20 mph in city centers and around tight corners, to 80 mph on straight runs -- and it's adaptable to the needs of city planners. SkyWeb Express would use up only 1 percent of the land, as opposed to 30 to 50 percent for automobiles and highways -- in populated areas. The system can run above or under the ground. "Planners invariably say that elevated is the way to go," says Edward Anderson, "because it's safer than surface-level systems." But SkyWeb still has the advantage over heavier rail, since the lack of bulk means "the visual impact is more acceptable."

Additionally, because the guideway is so slim, and because the cars are able to turn tight corners, the system can be implemented in urban centers where light and heavy rails can't go. This, according to Rep. Mark Olson, a Minnesota Republican and PRT advocate, is why the system is "the least likely to encourage sprawl, by far, because it's designed to make urban areas the most efficient possible."

Despite the promise that SkyWeb Express shows, the company has not had an easy time actualizing the system. It has built a 60-foot section of guideway and a test car, and according to Edward Anderson's most recent paper, this Phase I prototype has been tested thousands of times with only one minor failure. Now the company is looking to build a safety certification and training facility to test all of the components and train people to run it. Anderson estimates that the program would cost $24 million and take 30 months to complete, but at the end of it, Taxi 2000 would be ready to implement the first commercial system. Santa Cruz, Calif., Houston, Cincinnati and Minneapolis have all expressed interest in building SkyWeb Express tracks.

Although a few cities are ready to host the training facility, including Long Branch, N.J., and Duluth, Minn., Taxi 2000 is still trying to cobble together funding for the project. Even though Minnesota is the home of Taxi 2000 and many transit advocates and local officials have thrust support behind the prototype project, there's still plenty of resistance to PRT technology.

Olson, who has been heading a PRT public relations campaign in Minnesota to drum up support, says public skepticism about new technologies is a big hurdle, as are established government relationships with existing transit manufacturers. "You have 40-plus years of relationship between our legislators and bureaucracies, and a flow of money between them," he says. "We're basically recreating the battle between horse-and-buggy manufacturers and the creators of the automobile."

One of the jobs of Taxi 2000 now is to convince light and heavy rail companies that SkyWeb Express isn't here to replace existing systems (not yet, at least), but to compliment them. "I think there's a point in time when we will compete with them," says the recently appointed CEO of Taxi 2000, Morrie Anderson (no relation to Edward Anderson), "but it's really the phenomenon of introducing a new technology into an established environment." Taxi 2000's focus, then, is on partnering with light rail and heavy rail systems, extending public transit's reach into airports, inner-city areas, and shopping and entertainment centers. Because of SkyWeb's thinness ("We're talking about a track that's not much wider than your desk," says Morrie Anderson), it can link urban centers to existing light or heavy rail lines. And, unlike buses, SkyWeb Express doesn't add to street traffic (since it's elevated) or air pollution.

But in the long run, and if SkyWeb Express really works, it could encourage more people to get out of their cars than any other transit plan to date. The idea of on-demand, private service that will also ease your gas-guzzling conscience promises to be more enticing than even the sexiest-looking subway train. "We're not naïve," says Morrie Anderson, "We're not going to take everybody out of their cars, but I think with the taxi concept we start to crack that a little bit by giving them a service component that in some ways is at least comparable to a car."

Perhaps one of the best incentives for government officials and transit advocates to thrust support behind Taxi 2000 is that it's not the only PRT company out there. Taxi 2000, in fact, is in an international race of sorts with British company ULTra, based in Bristol, which boasts a PRT system similar to SkyWeb Express, except that the cars are bigger and are based on current electric-car technology: Instead of the electric track powering the vehicle like SkyWeb, the ULTra car propels itself through battery power, and the passive track just guides it.

ULTra CEO Martin Lowson claims his company is three years ahead of SkyWeb Express, mainly because it uses existing technology. They have finished all prototype testing and are hoping to sign a contract for the first commercial system in 2005. Edward Anderson, however, quibbles with Lowson's assessment of superiority, pointing out the ULTra's larger cars would cost more and add weight to the tracks, and that the electric-car system is more vulnerable to inclement weather. (Anderson, a Minnesotan after all, not only designed his monorail track to discourage snow piles, he also invented a special SkyWeb plow.) But both Anderson and Lowson agree that the rivalry means that more people around the world are becoming aware of PRT, and that's a benefit that beats their minor differences.

Still, a little competition couldn't hurt interest. That, and the idea that we could all be zipping around mountains in our own little pods, like the superheroes.