"Christmas With the Kranks"

"Heartwarming" fare in which a family that tries to bail out of the holidays learns that Christmas happiness must be purchased. 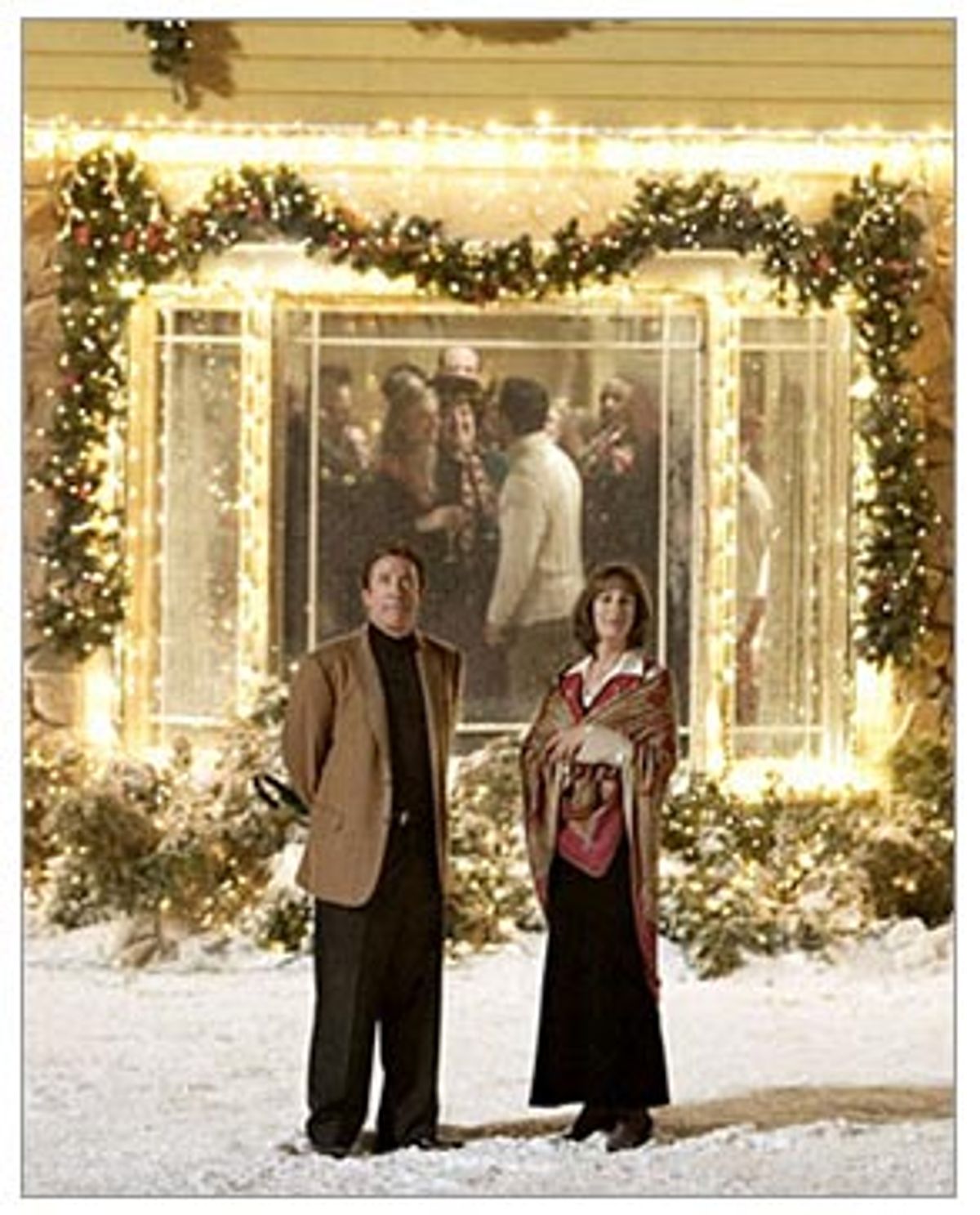 In Joe Roth's "Christmas With the Kranks," Tim Allen and Jamie Lee Curtis play Luther and Nora Krank, a suburban Chicago couple who, having just seen their daughter off for a stint in the Peace Corps, decide to forgo Christmas for a Caribbean vacation. By cutting presents, parties and tacky decorations out of their lives for one season, they stand a good chance of enjoying their holiday -- and possibly reconnecting with its true meaning -- instead of being stressed to the breaking point. And even after they make their customary holiday donations to children's charities and their church, they'll still save about three grand over what they normally spend during the holiday season.

Such downright un-American, anti-Christian sentiment mustn't be tolerated. And in "Christmas With the Kranks," it isn't. Adapted by hellspawn Chris Columbus from John Grisham's "Skipping Christmas," "Christmas With the Kranks" purports to kindle the warm glow of love for humankind in our hearts but reaffirms that the trappings of the holiday season are all that really matter. Conformity, signified by your willingness to wear dangly mini Christmas ornaments as earrings or to prop a light-up snowman on your roof so your house will match those of the neighbors, marks you as a good person.

Obviously, being a Jew or Muslim automatically means you're the odd man out. What a fine message "Christmas With the Kranks" sends to us all in this time of healing!

The laughs come fast and furious in "Christmas With the Kranks," beginning with Luther's being splashed by a big vehicle driving through a puddle during a late-November rainstorm. Later, more hilarity ensues when Nora, in anticipation of her sunny holiday, visits a tanning booth and the camera lingers snickeringly on her soft, pale, middle-aged bikini-clad body. The neighbors, who disapprove strongly of the Kranks' decision to opt out of the most sacred and costliest holiday of the year, circle their house with torches (OK, they're really just howling Christmas carols, but it's pretty much the same thing). So Luther, annoyed by their rosy cheeks and good cheer and feeling increasingly defensive about the decision he's made, sprays his walkway with water from the garden hose, which -- get this -- causes interlopers to slip on the icy surface and fall down.

In the end, the Kranks realize how wrong they were and learn that Christmas happiness not only can be bought -- but must be bought, or your family, friends and neighbors will hate you. They recognize how wrong they were to even contemplate spending their holiday in a way that would please them, as opposed to offending their community's sense of how things should be done. "Christmas With the Kranks" even has the audacity to play the old C card: One of the movie's peripheral characters has cancer and, as one tearful neighbor announces, may not live to see another holiday season.

It's hard to discern exactly whom this holiday tripe is for. The children sitting behind me squirmed and kicked my seat repeatedly, their persistent tattoo hitting the beat on boring old 1-and-3, just like the movie. Maybe the movie is for grown-ups, but it's hard to tell. Curtis, a wonderful comic actress as well as an extraordinarily attractive one, is given an unflattering mom haircut and spends most of the movie in white turtlenecks printed with ditsy holiday motifs and garishly embroidered holiday sweaters; she sits up in bed reading "Chicken Soup for the Mother's Soul."

It's impossible to tell if Roth (the director of "America's Sweethearts," as well as a founder of Revolution Studios, and formerly the chairman of Disney and Fox) is pandering to perceived middle-American tastes or exaggerating them as a way of poking gentle fun at them. (The movie's faux heartwarmer of an ending suggests the former.)

In any event, Curtis -- who in "Freaky Friday" gave one of last year's finest performances -- is wasted here. And what are Roth and director of photography Don Burgess thinking in shooting her body as they do, exaggerating every middle-aged contour? Two years ago Curtis posed in a sports bra and briefs for "More" magazine, as a way of showing how the movies, and the media in general, can take regular bodies and make them look close to perfect. In "Christmas With the Kranks," Curtis probably didn't think twice about appearing in a bikini (and the schlumpy way she carries herself through the movie is part of her performance). But there's still something cheap and unsettling about the way the normalcy of her body is exaggerated for laughs.

Tim Allen is adequate here, but then, the movie asks so little of him. (It's a shame that Allen is rarely challenged to deliver a performance as prickly, and as interesting, as the one he gave in the wonderful "Galaxy Quest.") And toward the end of the picture, the wonderful stage actor Austin Pendleton (best known in movies for his character work) shows up, as a neighborhood eccentric whom nobody in the neighborhood recognizes. He's about the only person in this movie who seems like a real human being.

The title "Christmas With the Kranks" suggests that the movie is straining to be pretender to the "Bad Santa" throne. But "Bad Santa" had a steadily beating misanthropic heart; "Christmas With the Kranks" professes to be all heart, but it has none at all. It says nothing about the true meaning of Christmas, which, I believe, has zip to do with Christianity in the first place. At the very least, it fails to recognize the simplicity and beauty of what I, as a person of Christian-type origin, affectionately and with a great deal of envy call Jewish Christmas: Chinese food and a movie on Christmas day. Hark! The herald angels sing! Listen closely and you might hear their message, which all creatures of the earth would do well to heed: Please pass the moo shu beef.