If U.S. officials who are complaining about election fraud in Ukraine applied the same standards in Ohio, then our own presidential election certainly was stolen. 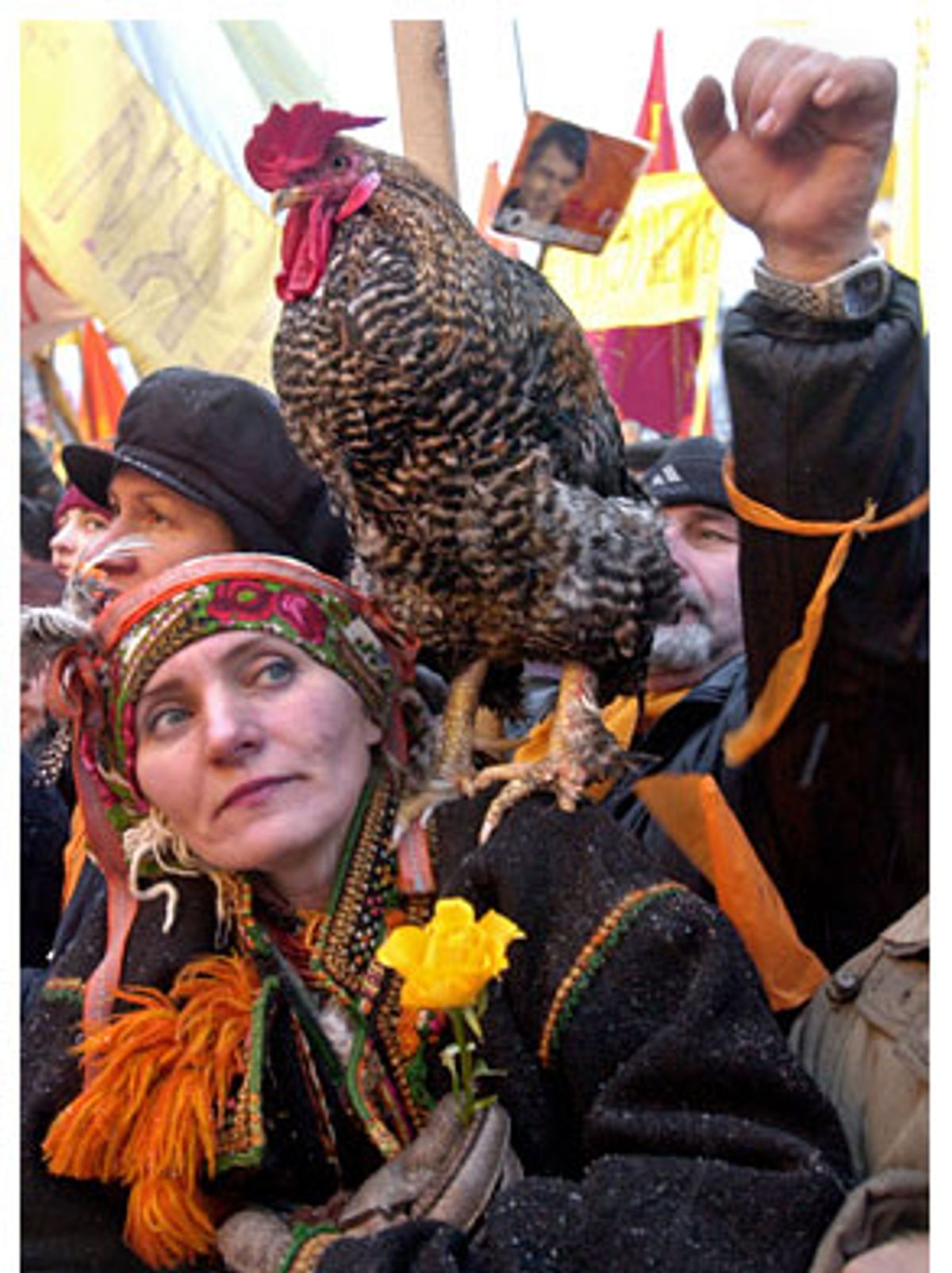 The election was stolen. That's not in doubt. Secretary of State Colin Powell admitted it. The National Democratic Institute and the International Republican Institute both admitted it. Sen. Richard Lugar of Indiana -- a Republican -- was emphatic; there had been "a concerted and forceful program of Election Day fraud and abuse"; he "had heard" of employers telling their workers how to vote; yet he had also seen the fire of the resisting young, "not prepared to be intimidated."

In Washington, former National Security Advisor Zbigniew Brzezinski demanded that the results be set aside and a new vote taken, under the eye -- no less -- of the United Nations. In the New York Times, Steven Lee Myers decried "the use of government resources on behalf of loyal candidates and the state's control over the media" -- practices, he said, that were akin to those in "Putin's Russia."

Personally, I don't know whether the Ukrainian election was really stolen. I don't trust Lugar, Powell or the National Democratic Institute. It's obvious that U.S. foreign policy interests, rather than love of democracy for its own sake, are behind this outcry. Russia backed the other candidate in Ukraine. For Brzezinski, doing damage to Russia is a hobby.

But if the Ukraine standard were applied in Ohio -- as it should be -- then the late lamented U.S. election certainly was stolen. In Ohio, the secretary of state in charge of the elections process was co-chairman of the Bush campaign in the state. He obstructed the vote count systematically -- for instance, by demanding that provisional ballots without birth dates on their envelopes be thrown out, even though there is no requirement for that in state law. He also required that provisional ballots be cast in a voter's home precinct, ensuring that there would be no escape from long lines. Republicans fielded thousands of election challengers to Democratic precincts, mainly to try to intimidate black voters and to slow down the voting process. A recount, demanded and paid for by the Green and Libertarian parties, has been stalled in court, so that it won't possibly upset the certification of Ohio's electoral votes.

In Franklin County, Ohio, there was rampant abuse, with voting machines added in Republican precincts and taken away in Democratic ones, as documented by the Columbus Dispatch. The result was a crippling pileup at the polls; many thousands did not vote because they simply could not afford to wait. I witnessed this with my own eyes. And Sen. Lugar could have, too, for much less than the price of airfare to Kiev.

According to an article by Bob Fitrakis and Harvey Wasserman: "The man running the show in Franklin County was Board of Elections Director Matt Damschroder, former head of the county's Republican Party ... Damschroder's official records also show that while desperate poll workers called his office throughout the day, at least 125 machines were held back at the opening of the polls and an additional 68 were never deployed. Thus while thousands of inner city voters stood in the rain, were told their cars would be towed, and were then forced to vote in five minutes or less, Damschroder sat on machines that could have significantly sped the process."

These are the established facts. Eyewitness reports of other forms of abuse include malfunctioning voting machines in Youngstown, a mysterious lockdown of the vote count in Warren County and lesser incidents that run into the thousands. And then there are allegations of irregularities in the count -- how solid these are, one does not know. Taken together, are these enough to change the outcome? No one can say. But the same is true in Kiev. And there, allegations by the defeated opposition are taken in good faith, and are quite enough to satisfy international observers and the government of the United States.

So where is the press? Why aren't there more stories on Ohio? Why is there no national pressure for a prompt statewide recount? Why no continuing outcry? Why no demand -- as our friends are making with strong American support in Ukraine -- that the election results in Ohio be set aside and a new vote held? Why has our election, with all its thuggery, been forgotten just three weeks after it occurred?

One reason, of course, is that the U.S. government gives direction in these matters, here at home as well as around the world. And our press, like that in "Putin's Russia," follows suit. Our political leaders, if one could call them that, stay silent and move on. They are terrified of being mocked and bullied by the press.

Another reason is that in Ohio, pissed-off voters are well behaved. They are working the hearings process, the recount process and the unhearing, unseeing courts. In Kiev, by contrast, hundreds of thousands of demonstrators are on the streets, staying there overnight in the bitter cold, bringing the government to a halt and the world to attention.

We'll get our democracy back, one of these days, when the Democratic Party has a mass base and is prepared to use it in the same way.