Fixated on an elusive hydrogen future, Detroit carmakers are letting Japan waltz in and grab a market that could explode. 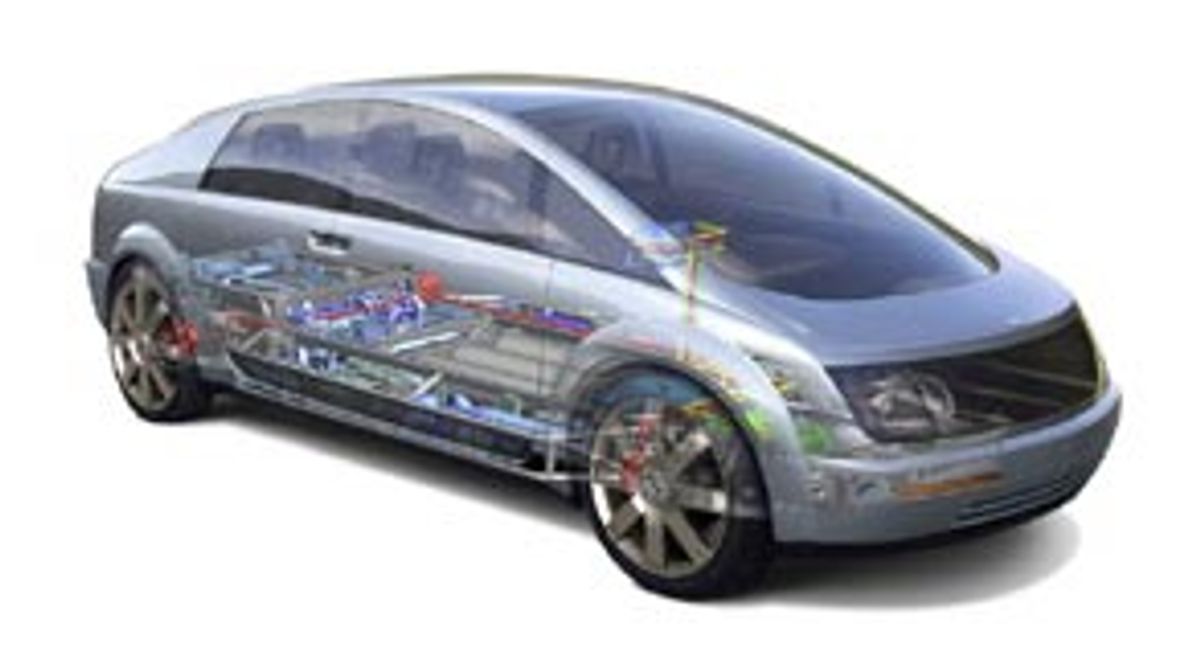 An invitation to visit General Motors' main R&D facility, just north of Detroit, is like being given a ticket back to a mid-1950s World's Fair. The General Motors Technical Center, as it is called, was designed by the architect Eero Saarinen -- who would later collaborate on the IBM pavilion at the 1964 World's Fair in New York. Saarinen's research campus for GM features a stainless-steel water tower that resembles a spacecraft ready for liftoff, stately rectangular reflecting pools punctuated by fountains, a 65-foot-tall dome, and sprawling, low, International Style office buildings. All that's missing as I park my rental car is the surging, glockenspiel-heavy "World of Tomorrow" soundtrack.

I'd come to talk to some of General Motors' top research executives about the company's investment in hydrogen fuel cell technology. (GM has been touting hydrogen as the fuel of the future and showing off a concept car called the Hy-wire.) But I ended up surprised at the swipes GM executives took at Honda's and Toyota's success with hybrid vehicles. They accused the two Japanese carmakers of selling their hybrids at a loss to generate positive environmental buzz, and argued that hybrids appeal only to a microscopic subsegment of U.S. consumers.

"You always have your early adopters," said Alan Taub, GM's executive director for R&D, about today's hybrid buyers. "Toyota sells as many Priuses as we sell Pontiac Aztecs. Is that a success?" Earlier this year, at the Detroit International Auto Show, Bob Lutz, GM's vice chairman of product development, had said that the company's decision not to make a hybrid car "was a mistake from one aspect, and that's public relations and catering to the environmental movement."

It is true: Hybrids -- vehicles that improve gas mileage by pairing internal combustion engines with batteries and electric motors, and recapturing some of the energy that is usually lost in braking -- represent only a tiny sliver of cars sold in the United States this year. For 2004, they'll account for about 0.52 percent of total sales, or 88,000 vehicles, according to Anthony Pratt, an analyst at JD Power and Associates. But is that a sign of a weak market, or merely the thin end of a wedge that could quickly become very, very large? Toyota recently announced that it will double the number of Priuses that it allocates to the United States next year, from 50,000 to 100,000, and Honda will introduce its third hybrid model this month, the first hybrid version of its popular Accord sedan. Pratt expects hybrids to account for 1.3 percent of all car sales in the United States next year, and other industry observers say that Toyota could surpass General Motors as the world's biggest automaker by 2006, partly on the strength of its hybrids.

As for the question of whether the Japanese carmarkers are selling their hybrids at a loss, just to look good for P.R. purposes -- well, the closer one looks, the less that seems to be true. Instead, Japanese carmakers appear to making the kind of front-end investments that pay off in the long run, with market share and eventual profits.

GM is not alone in its hybrid disdain. Its Detroit rivals have been similarly slow to warm up to hybrids. DaimlerChrysler, which is more interested in cleaner diesel engines than hybrids, did announce plans to produce a hybrid version of its Dodge Durango SUV by 2003, but that vehicle has apparently gotten lost on the way to dealerships. The introduction of Ford's first hybrid, the Escape SUV, was delayed from 2003 to 2004. General Motors aims to be the first company to profitably sell a million hydrogen vehicles -- "we measure success when it has six zeroes behind it," Taub told me. But the company has so far introduced only two "mild hybrid" pickup trucks, which improve gas mileage by about 10 to 15 percent, in a few scattered markets. (By comparison, Ford's hybrid Escape drives nearly twice as far as the traditional Escape on a gallon of gas.)

Back in the 1970s, the Big 3 carmakers watched in dismay as Japanese imports carved a huge swathe through their traditional markets. Is history about to repeat itself? Is Detroit missing out on a major shift in technology -- and car-buyer psychology -- by committing only grudgingly to hybrid vehicles? By betting big on the ever-elusive technologies of tomorrow, like hydrogen, carmakers such as GM may be letting the present slip away.

GM's research executives work in sleek offices and conference rooms reached by ascending Saarinen's renowned floating spiral staircase; the spaces would make ideal sets for a revival of "How to Succeed in Business (Without Really Trying)." The executives seem to view hybrids as a steppingstone on the way to hydrogen-powered vehicles, which would use fuel cells to turn hydrogen into electricity. (The problem with hydrogen is that there's no guarantee of three important things: that hydrogen fuel will be cost competitive with gas, that it will be produced in an environmentally sensitive way and that a hydrogen fueling network will be built anytime soon. Consumers also associate the gas with an ill-fated blimp that crashed in New Jersey.)

"By 2010, we want to be ready with a commercially viable hydrogen car technology," says Byron McCormick, GM's executive director of fuel cell technology and commercialization. He spins out visions of hydrogen cars that could serve as electrical plants for individual homes, plugging into the garage at night to produce power. "If you had just 10 percent penetration of fuel cell cars in California, the cars would have more generation capacity than the electrical grid," he says. The company is investing more than $1 billion in its hydrogen car development program.

But the day when 10 percent of Californians will be tooling around in fuel cell vehicles is still far off, as is the fantastical year of 2010, when teenagers will travel by personal jet pack and Christmas dinner will be packaged in a pill. Today, consumers who care about gas mileage and limiting their impact on the environment are purchasing hybrids.

General Motors' first forays into consumer hybrids, its Chevy Silverado and Sierra pickup trucks, aren't really in the same category as the Toyota and Ford hybrids. They're "mild hybrids," which seek fuel efficiency by capturing energy lost in braking and by shutting off the engine when a driver is stopped at a red light, using batteries to power accessories like the radio and air conditioning. Full hybrids like the Prius do those things, too, but they also use banks of batteries and electric motors to actually propel the vehicle when it's moving at low speeds. GM won't offer a full hybrid until 2007. (DaimlerChrysler has yet to start selling its first hybrid of any sort in the U.S., though now it seems that a Dodge Ram pickup will likely be first in line.)

GM's Taub says the company is trying to "take the hype out of hybrids," introducing the technology slowly, and in vehicles where it will have the greatest environmental impact, like trucks and SUVs, which swill more gas and emit more pollutants than passenger cars. And he adds that GM doesn't intend to sell money-losing vehicles. "The question with hybrids is who will be the cleverest at driving down costs the fastest," Taub says.

It's true that hybrids will have more mass-market appeal once they're no longer priced at a premium. (Today's hybrids can cost $2,000 to $3,000 more than their nonhybrid doppelgangers.) But it's also true that the Japanese carmakers, by virtue of five years of production experience, are already figuring out how to drive down manufacturing costs more quickly than their rivals in Detroit. Toyota is already producing some of its Priuses on the same assembly lines it uses to produce traditional sedans -- rather than their own dedicated lines. That's a precursor to being able to cost-effectively offer any vehicle type in one of two flavors: regular or hybrid.

"It's natural to wonder how we can make a profit on these vehicles," says Wade Hoyt, a spokesman for Toyota Motor Sales USA. "I would chalk it up to sour grapes. We broke even on the first-generation Prius during its model run, and the current generation will be profitable after about two years on the market, which is typical for any vehicle." The company's high-end Lexus division, which will start selling its first hybrid SUV next year, has tallied up more preorders for the Lexus RX 400h than any other vehicle in Lexus' 15-year history.

Honda won't disclose whether individual car models are profitable, but spokesman Chris Naughton says that while "some things may not be profitable from Day One, we are in the business to make money." Naughton says Honda had its three consecutive best months of sales of the Civic hybrid last spring, when fuel prices were peaking. The company expects to sell about 20,000 of the new Accord hybrids in the coming year. "Hybrids are selling in increasing numbers as there are more available in the marketplace, and as customers understand that you don't have to plug them in," Naughton adds.

And neither company is ignoring hydrogen fuel cell technology, either. In 2002, Toyota and Honda were the first to begin leasing fuel cell vehicles in California. But, as Hoyt puts it, "whether or not the hydrogen market ever develops is something of a crapshoot." Toyota isn't giving up the bird in the hand for the one in the bush. The company is also licensing its hybrid technology to other carmakers, like Nissan and Ford, leading some analysts to compare Toyota to Intel. "They're kind of becoming the 'Intel Inside' for hybrids," says Pratt at JD Power. And it's highly unlikely that Toyota is selling hybrid technology to its competitors without turning a healthy profit.

"There's no question that Toyota and Honda are ahead of all the other carmakers, including the European manufacturers, when it comes to hybrids," Pratt says.

GM and its Detroit brethren do seem to be stuck in neutral, with GM in particular obsessed by the hydrogen-powered world of tomorrow. But that could change quickly. The forecasting firm CSM Worldwide expects 20 new hybrid vehicles to be introduced by 2007. "General Motors sells about 1.2 million full-sized trucks and SUVs every year based on one platform," says Lindsay Brooke, an analyst at CSM. "If GM prices its hybrids well, and markets them and advertises them in the right way, GM could well be the volume leader in hybrids."

Brooke says that while the Japanese carmakers have earned bragging rights by being first to market with hybrid vehicles, it's too early to pick a true winner. But if there is a victory in store for one of the Big 3, it'll be one of the come-from-behind variety.