An international law expert explains why the new Red Cross report on the Guantanamo prison camp is more disturbing than the U.S.-operated torture chambers in Baghdad. 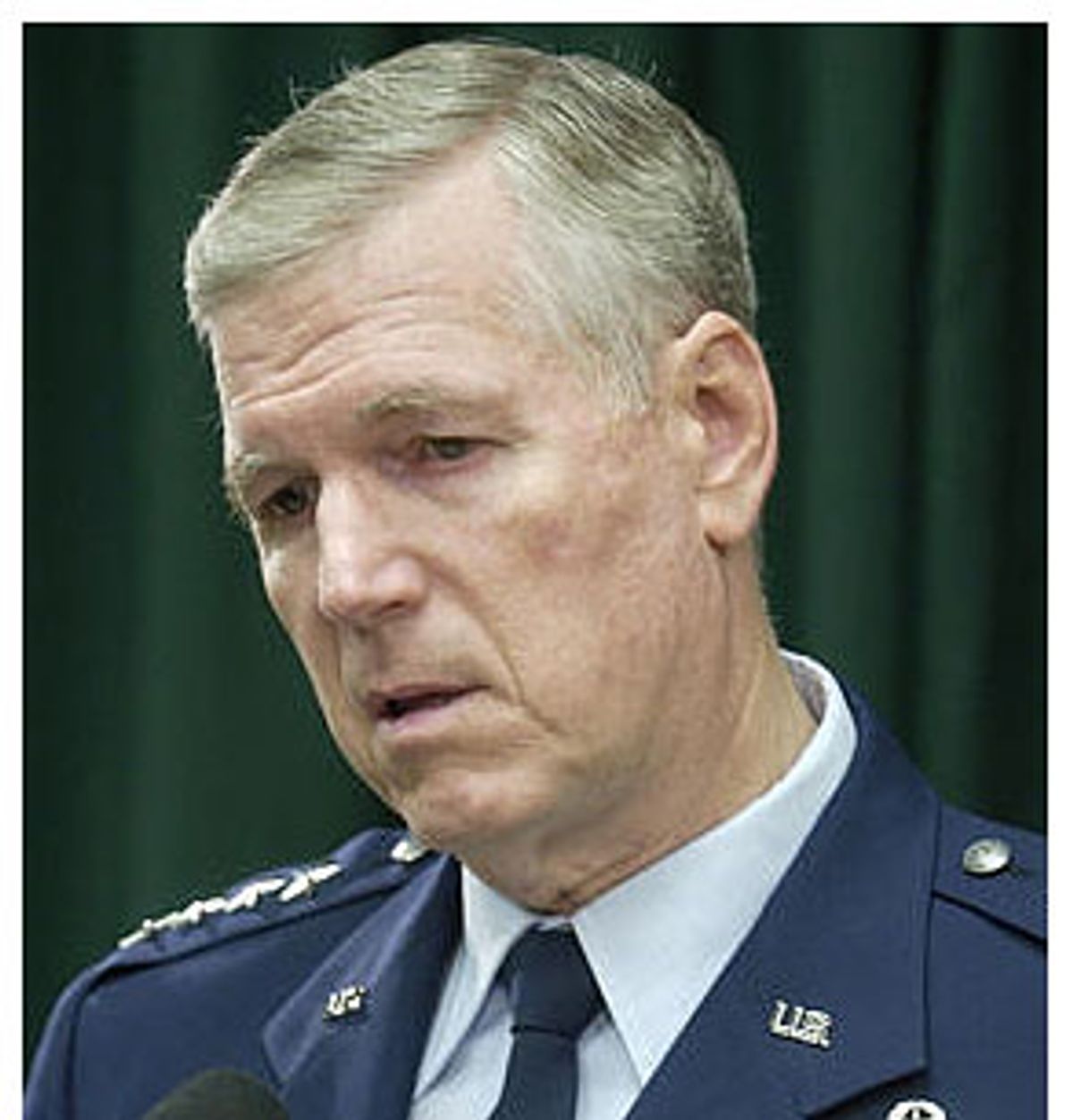 A confidential Red Cross report detailing interrogation techniques "tantamount to torture" at the United States-run prisoner camp at Guantánamo Bay, Cuba, offers the latest evidence that the Bush administration is systematically flouting international law as it battles the war on terrorism, says one legal expert. "All of this looks pretty clearly like a deliberate policy to create prisons at which all kinds of interrogation techniques can be used and remain unfettered by law," says Leila Sadat, law professor at Washington University in St. Louis and vice-president of the American branch of the International Law Association.

The Red Cross report on the Guantánamo prison camp, which documented apparent prisoner of war violations found during a June inspection, was first reported in Tuesday's New York Times. According to the Times account, Red Cross investigators found that interrogation methods were "more refined and repressive" than they discovered on earlier visits. "The construction of such a system, whose stated purpose is the production of intelligence, cannot be considered other than an intentional system of cruel, unusual and degrading treatment and a form of torture," the report said. The Red Cross found that prisoners were subjected to beatings, as well as cold temperatures and loud, persistent noise and music. The inspection team also detailed what they described as "a flagrant violation of medical ethics," citing instances where military physicians, at least indirectly, appeared to be aiding in the interrogation of detainees.

According to the Third Geneva Convention, "no physical or mental torture, nor any other form of coercion may be inflicted" to secure information, and prisoners who refuse to cooperate "may not be threatened, insulted or exposed to any unpleasant or disadvantageous treatment of any kind."

The allegations in the report were denied by the Pentagon, which insisted, "The United States operates a safe, humane and professional detention operation at Guantánamo that is providing valuable information in the war on terrorism."

Suspicion about possible coercive and abusive treatment at the secretive Guantánamo prison was heightened last spring when the abuse scandal erupted at Abu Ghraib prison in Baghdad. That's because Abu Ghraib's rules on interrogation practices appeared to have grown out of a visit to Iraq last year by Army Maj. Gen. Geoffrey Miller, who was then overseeing the Cuba facility. Miller reportedly offered suggestions, or "special operating procedures," on how interrogators at Abu Ghraib could better extract information from prisoners -- suggestions that appear to have run well outside the boundaries of legal humane treatment during wartime.

Leila Sadat, who also served as a commissioner on the United States Commission for International Religious Freedom during the Clinton administration, spoke with Salon about the Red Cross report on Tuesday afternoon.

What was the most striking element of the Red Cross report on Guantánamo Bay?

What really shocks me is that the detention policy and inhumane treatment was so bad. Guantánamo Bay has really been in the public eye, there's been tremendous international pressure on the United States about it, the Red Cross has been in there. And I just didn't think that conditions in Guantánamo Bay would be as bad as the Red Cross report makes them out to be.

This report was based on a June visit to the prison camp. Were you surprised because the Pentagon had apparently done little or nothing to alleviate the conditions at Guantánamo, even after the widely publicized Abu Ghraib scandal in spring?

We know that the detention and interrogation technique used at Abu Ghraib migrated from Guantánamo Bay, so I supposed I shouldn't be surprised. But my impression from reading press accounts was that they were using somewhat gentler interrogation techniques and producing more intelligence. And the Schlesinger report [headed by former Defense Secretary James Schlesinger] gives the clear impression that Guantánamo was better than Abu Ghraib, because they had more soldiers, that it was more professional, and there was a chain of command. So yes, maybe I'm being naive, but I am surprised that they were using torture at Guantánamo.

And it's interesting -- I was just listening to the media and they don't want to say it was torture. They say "tantamount to torture."

I believe that language is lifted from the Red Cross report.

Right, and I'm thinking to myself what does "tantamount to torture" mean? I suppose what the Red Cross could be doing is declining to give a legal opinion on whether it's torture or not and leaving that to others. When you say it's torture that really triggers a whole set of legal consequences, so I can understand the Red Cross being a little bit careful.

But you're an international law expert. Does what the Red Cross describes in its report sound like the legal equivalent to torture?

It's torture. A lot of these techniques have been looked at in other countries; there's been a lot of litigation about them. They seem pretty clearly to be prohibited by the torture convention and I suppose even those that dont amount to torture would nonetheless qualify as cruel or inhuman or degrading treatment, and that is also a legal definition.

As you point out, Guantánamo was supposed to be much better than Abu Ghraib because it was properly staffed and supervised. But is it really that different?

Does it suggest the tactics are much more deliberate than Abu Ghraib?

I think that's right. I think Guantánamo, when you look at the pattern of government memoranda, from the earliest [Alberto] Gonzales memorandum -- our new attorney general -- saying the Geneva Conventions are obsolete, to the [Rumsfeld] torture memo, to the newer one which justified the removal of detainees from Iraq to undisclosed locations. All of this looks pretty clearly like a deliberate policy to create prisons at which all kinds of interrogation techniques can be used and remain unfettered by law.

Has there been anything quite like in the last 20 or 30 years?

Not that I know of. And the secrecy, I think, is the biggest issue. That's just a recipe for abuse. And that's not to say the people who are working there are bad people or don't mean to be doing their jobs well. It's just that when you have a secret organization that is not scrutinized by anybody and unfettered by the rule of law, it's pretty clear what's going to happen after a while.

That's pretty shocking. Doctors historically like to keep their roles separate. In Geneva law there's a real historical precedent for that, which is the Nazis during World War II really involved the doctors in their interrogation and medical experiments, and it was just horrific. After the war, there were trials of Nazi doctors. And the Nuremberg principles against medical experimentation were adopted. So it's been pretty clear in international law since World War II that you need to keep the medical folks separate. Doctors are there to treat the wounded, to treat the sick. They're not there to provide assistance to interrogators.

The Red Cross suggested doctors were either tipping interrogators off to thresholds of pain for specific detainees or letting them know what ailed the detainees to help them in their interrogation process.

That's exactly right. We dont have a copy of the report so it's hard to know exactly what's in there. But it sounds like doctors are opening up their files and allowing the interrogators to look at the files and then consulting with them. It's clearly a grave breach of the Geneva Conventions to engage in medical experimentation. And some of these techniques may rise to that level. It's quite a serious offense against the laws and customs of war.

Going back to the Abu Ghraib comparison, which do you think is more disturbing -- Abu Ghraib or Guantánamo?

I found the level of sadism to be pretty surprising at Abu Ghraib and very emotionally upsetting. But it's more understandable in context, because again you had undermanned troops in a war situation being given this command to sort of soften up the prisoners for interrogation.

But Guantánamo has come to symbolize in international law circles or even diplomatic circles, this attempt by the U.S. to set up law-free zones. So I think Guantánamo is maybe the scarier of the two precedents. Abu Ghraib will leave a searing image, but it was more flowing from the war, whereas Guantánamo is clearly something where the secretary of defense has said these people are going to be held until they need to be held. That this is a war on terror and we don't know how long it will last. So the prospect of sort of indefinite detention, holding people without even keeping a register, is very ominous. If you look at all the United Nations guidelines on the treatment of prisoners, the first thing you're supposed to do is you're supposed to keep a register -- a name of all the prisoners and when they were taken in and what they're going to be charged with. It's just something you've got to have in order to prevent abuse.

If you go to a country like Uzbekistan that has serious human rights problems, they have prisons full of people and Amnesty International is always going in and saying you need to have a register, you can't just detain people without charges, you can't detain people indefinitely. And their response is, well, it's state security. These are terrorists. Well, we're starting to sound like them.

Is it possible, following this damning report, that the Bush administration will try to block the Red Cross from visiting Guantánamo in the future?

I think the administration could say, "Look, if Geneva law does not apply, then we don't want the Red Cross there. "

Is that a plausible scenario?

I think it's very plausible, I do. Four years ago I never would have said that. I think now almost everything's plausible. I'm sure it's being discussed right now.

And if the U.S. did deny the Red Cross entrée to prison camps, what league would that put us in?

That would put us alongside North Korea.

I think one of the things that's so upsetting about this is that international law is based on reciprocity. And so when the United States starts undermining the system, it sort of gives a green light to everybody else to start undermining the system. Right now it's the United States saying, "We don't really care." And next it might be Zimbabwe that starts copying us and saying, "Well, these are unlawful combatants," or what have you. I understand the trauma of 9/11, the temptation to overreact from 9/11, but administration officials are sort of putting out the fire on one end and ignoring the huge blaze they're setting on the others.

Because the fear is, what happens if it's U.S. troops who are the ones being held captive?

Right. The U.S. is going to want the protection of the Geneva Conventions. If our soldiers are captured, we don't want another state saying, "Oh, they're unlawful combatants, we're going to torture them." That's why I really don't understand the government's lack of perspective on this issue.