The hand-wringing over Jason Giambi and Barry Bonds is stupid and hypocritical. Everyone knows the score. 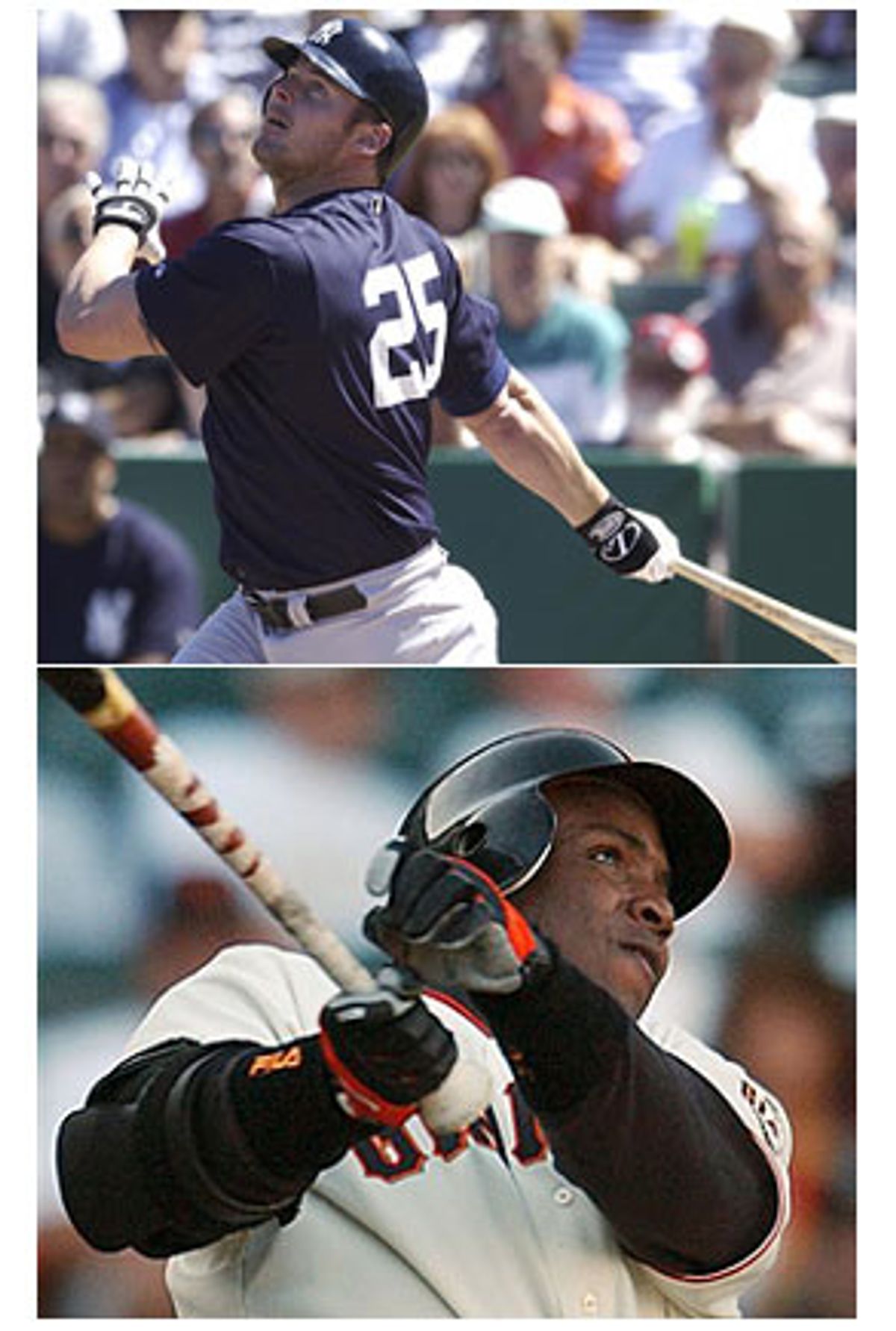 Overnight, in the wake of another scoop in the San Francisco Chronicle ("Giambi admitted taking steroids"), the public's image of party-boy slugger Jason Giambi lurched sickeningly toward the lurid and obscene. Giambi has now been snared in a medieval hell of the media, our version of the public square, where he is being pelted with rocks and rotten vegetables and taunted for the unpardonable sin of robbing a few final holdouts of their illusions about the state of baseball.

The New York Post did its best to stir up a lynch-mob mentality with its front cover on Friday, "Boot the Bum," featuring a vintage picture of a young Giambi, shaggy-haired and tattooed, showing off the steroid-enhanced biceps that turned him from a talented doubles hitter and RBI man to a leading home-run threat capable of seducing Yankee owner George Steinbrenner to the tune of $120 million.

An accompanying editorial, beginning on the front page, blasted Giambi in terms usually reserved for the likes of Saddam Hussein, saying he has "disgraced the Yankee pinstripes and made a mockery of everything that is wonderful and good and pure about the game of baseball."

On Friday, the Chronicle printed leaked grand jury testimony by Barry Bonds, in which the San Francisco Giants slugger admitted using treatments -- known as "clear" and "cream" -- supplied by BALCO (Bay Area Laboratory Co-Operative), a nutritional firm under suspicion for dishing out a menu of steroids to professional athletes. According to the Chronicle, Bonds testified that he had never asked his weight trainer, Greg Anderson, what the substances contained. Bond recalled that when Anderson "said it was flaxseed oil, I just said, 'Whatever.'" Anderson has since been indicted for the illegal distribution of steroids.

Giambi, however, came clean in his testimony, saying he was aware that Anderson was supplying him steroids. For that, he may just have elbowed past Shoeless Joe Jackson and Pete Rose as the most tragic figure in baseball history. But if Giambi is doomed to rot in hell for using chemical enhancement to try to make himself a better baseball player, he's going to have plenty of company on his piping-hot bench for all of eternity.

When an honest history of baseball emerges in the wake of the Giambi disclosure and the BALCO investigations, it will become clear that the weight-lifting craze and steroid revolution were inextricably related. In fact, a good many weight lifters, most of them over 30 years old, have no qualms about saying that they helped inflate their muscles with steroids. I covered the Oakland A's for the San Francisco Chronicle in the '90s and can say that people in the A's organization will tell you behind closed doors that Mark McGwire used to stand around in the weight room, making jokes, rather than lifting weights. That's because the injections he was getting in the ass were taking care of all the bulking up he needed.

Here's another basic fact to keep in mind about steroids: They're here to stay. Do we wish they had never been part of baseball at all? Of course we do. But the real story of BALCO is about how technology keeps marching forward. As the science of steroids advances, and doses and mixtures are further refined, steroids are likely to become attractive to even larger numbers of people, particularly men drifting into their 40s and 50s, worried about receding hairlines and flabby stomachs. All those TV ads of happy "Bob," pleased at his "male enhancement," are really just about testosterone. With male vanity being what it is, and with its attendant mentality that some is good but more is better, who is foolhardy enough to argue against a big future for steroids?

The Giambi steroid scandal is mostly about the prevalent vice of denial. Puerile outrage of the sort dished out by the New York Post reflects a larger problem with how people talk and think about baseball. As a classic baseball book like "A Day in the Bleachers" by Arnold Hano -- or anything by Roger Angell -- reminds us, the first tool for understanding baseball is the eyes. Trust your eyes, as Hano did at the Polo Grounds, and you can see that steroids were a huge part of baseball in the storied summer of 1998, when a pumped-up Sammy Sosa battled pumped-up Mark McGwire for Roger Maris' single-season home-run record. However, fear or cravenness or ignorance held far too many people back from acknowledging the obvious.

In 2000, two years after the steroids home-run fest -- by all accounts a major factor in restoring baseball's popularity after the strike-canceled World Series in 1994 -- I published an article in the New York Times, "Baseball Must Come Clean on Its Darkest Secret." I declared that "Mark McGwire has used steroids" and called on people in baseball to stop hiding behind ludicrous forms of denial and start admitting the obvious. In reply, a New York Yankees strength and conditioning coach authored an entire article in the Times, based on this improbable denial: "My mother always said, 'If you don't have anything nice to say, don't say anything at all.'"

Anyone trying to piece together an accurate picture of why the Yankees would sign such an obvious steroid user as Giambi probably ought to interview that strength and conditioning coach. Or of course they could consider the obvious: greed.

The Yankees have a proud and honorable tradition, but Steinbrenner has always been about wanting more, more, more. He surely knew about Giambi's steroid use but he couldn't resist the temptation of putting him in pinstripes and having those steroid-aided home runs winning games for him instead of the other guys.

Any responsible list of those implicated in baseball's steroid mass has to include former Texas Rangers managing general partner George W. Bush, who on Aug. 31, 1992, traded Ruben Sierra to the Oakland A's in exchange for Jose Canseco. Once a Ranger, Canseco immediately started giving teammates detailed primers on using steroids.

In his State of the Union address on Jan. 20, 2004, Bush said that "tonight I call on team owners, union representatives, coaches, and players to take the lead, to send the right signal, to get tough, and to get rid of steroids now." But when "he was the owner of a baseball team, Mr. Bush did nothing about steroids," Paul Begala remarked on "Crossfire." "Although other sports were cracking down on steroids, Mr. Bush and his fellow baseball owners refused to do a thing.

"In fact, Mr. Bush even traded for Jose Canseco, bringing him to the Texas Rangers -- a man who one sports agent told the UPI was 'the Typhoid Mary of steroids.' Perhaps Mr. Bush can get some advice on the steroid crisis he's just discovered from the man he has repeatedly praised, California governor and former steroid abuser Arnold Schwarzenegger."

Earlier this year, during work on my book, "One Day at Fenway," I asked an Oakland A's official to read the manuscript. I was surprised when he told me that I had hit the right note on steroid use in baseball. Here's what I wrote:

"Everyone in the game knew that Mark McGwire had taught Giambi tricks about how to get bigger and stronger back when they were teammates in Oakland. It was a lot easier to look the other way when the big muscles produced big numbers, which was why the clock was ticking loudly for Giambi: He was running out of time to prove he really was a Yankee."

It's now clear that Giambi will never cross that threshold -- the way that Hideki Matsui already has -- and be accepted as a true Yankee. Instead, he will be reviled and tormented. It will be a painful experience for him, his brother, Jeremy Giambi, also a ballplayer, and especially for his Yankees-loving father. To be honest, it will also be painful for me, as I was among those who had a front-row seat for Giambi's career, start to finish.

I was there at a Chicago bar early in 1995 when Giambi, a promising minor leaguer getting a taste of the big leagues, did his best to woo Mark McGwire with a passionate speech about the key to hitting.

Giambi was bright, personable and quotable. He was also talented, young, brash and proud of it. A few years later, he grinningly referred to his A's teammates as "young, dumb and full of come."

I remember standing in front of the A's dugout before a 1998 game at Cleveland's Jacobs Field and having a casual conversation with Giambi about androstenedione, the testosterone-booster that McGwire admitted he had used. Giambi told me yeah, sure, he'd given it a try, but wasn't using it anymore because there wasn't much to it. You felt the effects for a while, he said, and that was that. What I didn't ask him, and should have, was what other steroids he was using. It wasn't really my job as a baseball beat writer to ask that question, since alienating players was not a good way to stay on the beat. But I still should have asked. I hope that every other sportswriter -- and sports fan -- weighing in with false piety on Giambi and steroid use, will share in the responsibility. Who is to blame? All of us.