Why it took soldiers to put Rumsfeld on the defense

The Pentagon press corps has been missing in action, so Army grunts stepped in to do its job. 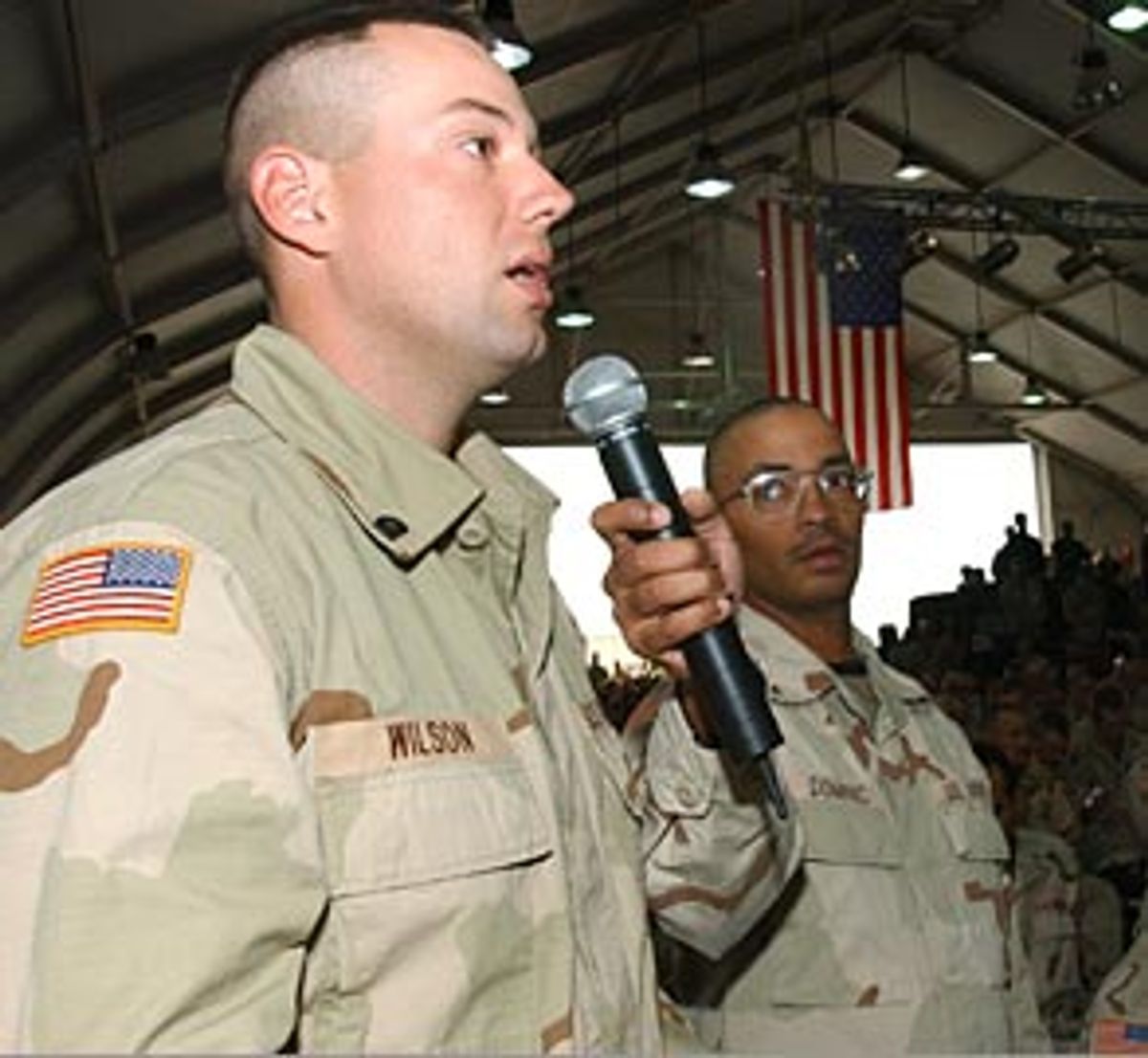 Secretary of Defense Donald Rumsfeld's rude reality check on Wednesday -- broadcast worldwide during a town-hall-style Q&A session with surprisingly blunt Army reservists in Kuwait -- generated headlines in part because it's so rare for Army grunts to challenge the Pentagon leadership in public. But the critical give-and-take also made waves and jolted the secretary because Rumsfeld is simply not accustomed to facing this type of tough questioning, certainly not from the deferential press corps that covers him and the Pentagon on a daily basis. Instead, many reporters in the clubby world of the capital continue to hold Rumsfeld in unusually high regard, considering he's the point man for the deeply troubling U.S. strategy in Iraq.

On Wednesday, though, soldiers and reporters switched roles. Suddenly it was the troops, usually called upon during public forums to loft softball questions to high-ranking administration officials, who were raising uncomfortable lines of inquiry. After suffering through nearly two years of unforeseen and chaotic violence in Iraq, seeing nearly 1,300 of their fellow soldiers killed, and watching their tours of duty being extended again and again by the Pentagon, rank-and-file members of the U.S. military took it upon themselves to turn up the heat on the war planners and seek some semblance of accountability. That used to be the job of journalists.

"Why do we soldiers have to dig through local landfills for pieces of scrap metal and compromised ballistic glass to up-armor our vehicles, and why don't we have those resources readily available to us?" was the blunt question that Army Spc. Thomas Wilson of the 278th Regimental Combat Team put to Rumsfeld, who was visiting soldiers at Camp Buehring, Kuwait, on the eve of their deployment into Iraq.

After asking Wilson to repeat his question, which garnered cheers among the 2,300 troops assembled, a somewhat startled Rumsfeld replied, "As you know, you go to war with the army you have, not the army you might want or wish to have at a later time." You could almost hear the implied "young man" that Rumsfeld would have loved to tack on to his condescending reply.

But Rumsfeld's headmaster-style pushback, so effective in dealing with timid reporters inside Pentagon briefing rooms, did not stem the flow of tough questions, as troops peppered him about the Pentagon's "stop loss" program, which forces volunteer troops to serve longer than expected. "Settle down, settle down," Rumsfeld said at one point, trying to regain control. "I'm an old man and it's early in the morning. I'm gathering my thoughts here."

The revelation Thursday that an industrious Chattanooga Times Free Press reporter embedded with Wilson's unit reportedly talked with the soldier beforehand about posing his pointed question to Rumsfeld simply highlights how complacent the Beltway press has been on the urgent issue of armor shortage. Why haven't reporters worked up the nerve to ask these questions themselves before now? Meanwhile, the reporter's handiwork regarding the armor query doesn't explain away the other tough questions Rumsfeld had to fend off from the troops on Wednesday.

Rumsfeld's unsteady performance in Kuwait was reminiscent of President Bush's first debate with Sen. John Kerry. Bush was so accustomed to being surrounded by Washington yes men -- and that includes the press corpsthat he appeared jolted when Kerry forcefully challenged him on an array of assumptions about the war in Iraq.

Without the press filters on Wednesday, Americans saw a different Rumsfeld, and certainly a less sure-footed one. "He seemed like he was stuttering and stumbling -- like he was caught off guard," Regina Wilson told the Associated Press. She's the former wife of the Iraq-bound soldier who asked about the missing armor. "Rumsfeld's answer seemed like he was sidestepping around the question." (Wilson noted her ex-husband had "dissed" Rumsfeld.)

Following the verbal jostling in Kuwait, Rumsfeld insisted that the exchange with the troops had been healthy. But privately he must have longed for the accommodating style of the inquisitors back in Washington, who at a recent press briefing were far more interested in bureaucratic, inside-baseball-type matters -- like whether Rumsfeld had lobbied against intelligence reform legislation and whether he would remain for the duration of Bush's second term. Of course Rumsfeld has been handled with kid gloves almost since the attacks of 9/11. Dubbed a D.C. media "rock star," and praised for his forceful press briefings, where Rumsfeld made it clear he was not taking any guff from reporters, the Pentagon chief reached nearly untouchable status in the press. "Defense Secretary Donald H. Rumsfeld is still a media darling, captivating the press with straight talk, reason and some canny American know-how," wrote the Washington Times in April 2003. MSNBC President Erik Sorenson fawningly told the paper, "Our viewers tell me that beyond all else, the secretary is a clear speaker and a strong storyteller, which audiences of all stripes find thoroughly engaging."

Rumsfeld's media massage got even more soothing on the eve of his trip to Kuwait, with Bill O'Reilly giving him the usual Fox News kid-glove treatment (O'Reilly: "Can't you institute a draft for the ACLU, just them?"). Some local radio talk show hosts who had also been granted interviews responded even more slavishly. Marc Bernier of WNDB-AM in Daytona Beach, anxious to absolve Rumsfeld of any responsibility in the Abu Ghraib prisoner torture scandal, asked, "Am I correct that any of the things that went wrong were not in any of the memos that you ever sent?" (Rumsfeld: "You're quite right.") Meanwhile, Steve Gill at WWTN-FM in Nashville said gushingly, "Secretary Don Rumsfeld, you're one of my heroes."

Apparently that kind of hero worship does not extend to the Persian Gulf. With Wednesday's showdown in Kuwait, some soldiers signaled they're done playing the role of dutiful wartime props for the Bush administration. When will more members of the Washington press corps do the same?